This collection looks to bring you the behind-the-scenes story of this institution, from getting huge stars like Muhammad Ali, Mr. T and Liberace for the first show, to hosting it in three different cities the following year all the way through the various celebrities, cities, wrestlers and beyond.

With behind-the-scenes footage never seen before to talks with the men who made it happen, The True Story of WrestleMania gives the fans a chance to see how this monumental event came together and the chaos that ensues behind the curtain.

This is WrestleMania as you’ve never seen it before… 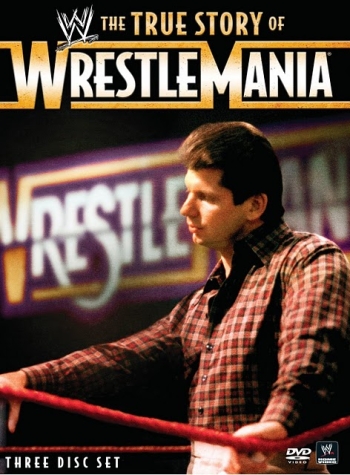 Now it’ll come to no-one’s surprise that the title of this DVD release isn’t 100% accurate. That being said, there is a lot of honest criticism from within when things didn’t go quite right and, to be fair, a lot of deserved back-slapping for when things exceeded expectations.

What you have, in essence, is a documentary running through the history of WrestleMania in mostly chronological order. Of course, with the running time, a lot is skipped through quickly or omitted entirely, but rarely seen (and, in some cases, never seen) footage adds to what you already knew about WWE’s showpiece event.

A lot of focus is on the sacrifices that were made to bring the first WrestleMania (had the show flopped, WWE would most likely not exist today), the logistical nightmare of the second edition, the monumental encounters between Savage/Steamboat and Hogan/Andre (for different reasons, these are widely considered THE matches of WrestleMania history) and the decision to run back-to-back ‘Manias at Trump Plaza in 1988 and 1989.

Each event is covered in some way or another, but everybody is going to have something they cherish from WWE history overlooked, which is unfortunate, but the nature of the beast when a documentary is covering over 25yrs of wrestling lore.

Special attention is paid to the contributions of Shawn Michaels, Steve Austin, The Rock, Vince McMahon, Undertaker and Hulk Hogan, while behind-the-scenes footage from WrestleMania IX is a genuine eye-opener and contains stuff that I don’t think anyone will have seen before. A chapter on how they renovated the Citrus Bowl for WrestleMania XXIV is insightful and really shows us how much work the WWE production and design team have to put in to make these events a reality. The chapter on Madison Square Garden is also

This is a fantastic piece of business by WWE and each talking head has something worth listening to as they relay their experiences of working at the biggest wrestling event on the planet. I genuinely sat through and enjoyed every minute of the documentary, with the sole exception of Randy Savage versus The Ultimate Warrior from WrestleMania VII being completely overlooked. Thankfully the match is shown on the second disc.

As for the matches on the card, here’s my very quick rundown and marks out of five for enjoyment.

HBK v Austin – 4/5 (HBK, even with a broken back, was still a showstopper)

Shane v Vince – 5/5 (who’d have thought that two non-wrestlers would pull out this?)

WWE hit another home run with this documentary release. While, as I said, it’s not 100% accurate, you can’t argue with the scope and spectacle WrestleMania brings. This is a truly great watch, with the backstage footage being both interesting and allowing the fans to see the inner-workings of the WWE on it’s biggest day of the year.

Of course, there’s going to be matches missing that should be there (Warrior/Hogan, Show/Mayweather, etc), but time restraints mean that everyone is going to have one of “their matches” omitted. The bouts included however are of either historical significance (Hogan/Andre, the first main event, Hogan/Rock) or are stunning in-ring contests (Hardys v Dudleys v E&C, Austin v HBK).

Easily one of the most essential purchases in recent memory, you owe yourself to check out this release.