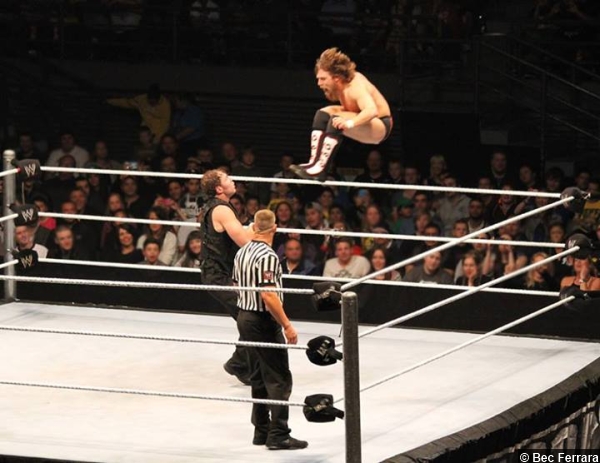 Major Anarchy in the UK.

The 1068th edition of WWE Monday Night RAW came to you from the Phones 4 U Arena in Manchester, England. As revealed earlier in the day via WWE.com, The Authority will not be present on RAW as Triple H & Stephanie McMahon are on “vacation”, which leaves a major void in regards to who will run the show! Will The Authority’s new Director of Operations, Kane, be placed in charge of RAW? What about RAW General Manager Brad Maddox or SmackDown General Manager Vickie Guerrero? Will they have a legitimate claim to running the show?

Also, the new alliance of former rivals CM Punk & Daniel Bryan has proven to be more of a thorn in the side of The Wyatt Family then they may have predicted. What will Bray Wyatt, Luke Harper, & Erick Rowan do to try and re-assert themselves against the new alliance that they are responsible for forming?

Two weeks before he defends the WWE Championship against Big Show at Survivor Series, RAW kicks off with the “face of the WWE”, the WWE Champion Randy Orton. The WWE Champion says that Big Show got his job back and Show “blackmailed” his way into a WWE Championship match. Orton then vows to retain the WWE Title at Survivor Series and maintain his spot as the “face of the WWE”. The WWE Champion then states that, while Triple H & Stephanie McMahon are on a “well-deserved vacation”, he is in charge of RAW! RAW General Manager Brad Maddox then interrupts, telling Orton that he appreciates Orton wanting to help out, but he is the General Manager of RAW and, therefore, he is the one who is in charge of RAW. This brings out The Authority’s new Director of Operations, Kane, who says that, as the newly appointed Director of Operations, he supersedes Brad Maddox and, therefore, is the one in charge of RAW tonight. Brad Maddox attempts to stand up to Kane, saying that he has been the GM for quite a while now and as the “new guy in town”, Kane should follow his lead! Maddox then continues with his announcement, saying that Randy Orton will face Cody Rhodes tonight! However, when the GM tries to bring Rhodes out, Kane interrupts the GM, saying that Orton will be facing Goldust!

This leads to an argument between the GM and the Director of Operations, but Orton breaks it up, telling them to make up their minds because he certainly cannot face both of the WWE Tag Team Champions. Things then get even more complicated with the arrival of SmackDown General Manager Vickie Guerrero, who says that she has complete confidence in Randy Orton’s in-ring abilities and, as the “voice of reason”, she believes that The Authority would agree that what is “best for business” and that is to use the WWE Champion’s idea to face both of the WWE Tag Team Champions!

In a match inadvertently suggested by Randy Orton to SmackDown General Manager Vickie Guerrero, the opening match of the night would see WWE Champion Randy Orton squaring off with WWE Tag Team Champions Goldust & Cody Rhodes in a 2-on-1 Handicap Match! During the match, Randy Orton decides that he had enough as the WWE Champion opts to take a count-out loss to Goldust & Cody Rhodes. However, Orton finds himself trapped with the arrival of the #1 Contender for the WWE Title, Big Show, as Big Show attacks the “face of the WWE”. Big Show wastes no time in pummeling Orton, dismantling the announce table before setting up the steel steps, grabbing the WWE Champion by the throat, and delivering a giant chokeslam to Orton through the announce table!

Backstage, Big Show is spotted squeezing into a British taxi as “The World’s Largest Athlete” directs the taxi driver to take him to the nearest pub as Big Show exits the arena.

Backstage, a confrontation between Director of Operations Kane and RAW General Manager Brad Maddox culminates in both men agreeing on a huge main event as all three members of The Shield would face CM Punk & Daniel Bryan in a 3-on-2 Handicap Match, as well as John Cena facing The Real Americans in a 2-on-1 Handicap Match!

Backstage, WWE Champion Randy Orton is receiving medical attention for his shoulder when The Shield comes into the training room. The furious WWE Champion demands to know where The Shield was at earlier when Big Show put him through the announce table. Dean Ambrose tells the “face of the WWE” that it is none of Orton’s business where they were at with Seth Rollins adding that they do not work for Vickie Guerrero, Brad Maddox, or Kane before Roman Reigns chimes in that they “damn sure” do not work for Randy Orton!

In his first one-on-one match since his return from injury last week, Tyson Kidd, with Natalya in his corner, would go one-on-one with Fandango, with Summer Rae in his corner. In the end, it was Fandango ruining Tyson Kidd’s return, countering a sunset flip into a pinning predicament, picking up the win over Tyson Kidd.

Two weeks before he defends the World Heavyweight Title against Alberto Del Rio at Survivor Series, World Heavyweight Champion John Cena would face both of The Real Americans, with Zeb Colter in their corner, in a 2-on-1 Handicap Match. During the match, Alberto Del Rio made his way to ringside to sit in on commentary. Despite an excellent performance from The Real Americans, it would come down to John Cena locking the STF in on Jack Swagger, forcing Swagger to tap out to pick up the win. After the match, Cena would fend off an attack from Antonio Cesaro, but Alberto Del Rio would spot an opening to attack as Del Rio assaults the World Heavyweight Champion with a steel chair, wrapping the chair around the surgically-repaired arm of Cena and stomping the arm repeatedly. Del Rio would then lock in the cross armbreaker on Cena, but after referees were unable to break things up, Big E. Langston would emerge, tossing Del Rio out of the ring, potentially saving Cena’s career!

Ryback was in action on RAW as “The Wrecking Ball” would go one-on-one with R-Truth. Ryback would dominate the majority of the match, but the veteran R-Truth would spot an opening, surprising Ryback with a roll-up to pick up the win.

In an unexpected RAW appearance, Paul Heyman would make his first appearance since Hell in a Cell as, seated in a wheelchair, sporting a neck brace, as well as a leg brace and crutch, Heyman would be flanked by Intercontinental Champion Curtis Axel. Heyman says that CM Punk had a lot of “help” in doing what he did to Heyman at Hell in a Cell, turning on his charge, Ryback, calling him a “big, ugly, dummy”! Heyman continues, saying that he offered Ryback the chance to be a “Paul Heyman guy”, but they all found out that, when Ryback faced CM Punk one-on-one, Ryback bit off more than he could chew. Heyman then says that he does not only blame Ryback and he does not only blame CM Punk, he blames the fans, saying that the fans encouraged Punk to beat him down at Hell in a Cell. Heyman screams at the fans that it is all their “fault” and that is why he is there, because he wants to go public with his “intentions”.

Heyman then vows that he will “return with a vengeance” and he will drive his “sword” through the heart of CM Punk. Heyman’s mood immediately changes with the arrival of “The Best in the World” CM Punk, who meets Curtis Axel on the outside, brawling with the Intercontinental Champion before putting Axel down with the GTS! Punk then retrieves a kendo stick from under the ring with his sights sets on Paul Heyman. Punk then enters the ring, spinning Heyman in circles in his wheelchair before dumping Heyman out of the chair and whaling away on Heyman with repeated kendo stick shots to the back!

After a satisfying beat-down on Paul Heyman, CM Punk would team with Daniel Bryan in the main event as Punk & Bryan would face all three members of The Shield, United States Champion Dean Ambrose, Seth Rollins, & Roman Reigns, in a 3-on-2 Handicap Match. At the end of a wild match, CM Punk would hit Roman Reigns with the GTS before locking Dean Ambrose in the Anaconda Vise, but that is when things would take an unusual turn. The lights would go out in the arena, signifying the arrival of The Wyatt Family and, sure enough, when the lights came back on, Luke Harper & Erick Rowan were in the ring and Bray Wyatt was on the outside. However, what made this showdown unique was the fact that The Shield’s Dean Ambrose & Seth Rollins unexpectedly found themselves between Punk & Bryan and The Wyatt Family! Punk would catch Rollins with a knee that would shove Rollins into Harper, who shoves Rollins. As Punk & Bryan slide out of the ring, a strange face-off goes down as The Shield’s Dean Ambrose & Seth Rollins get in the face of The Wyatt Family’s Luke Harper & Erick Rowan! Then, in a moment that the world has wanted to see since The Wyatt Family arrived in the WWE earlier this year, all hell would break loose between the WWE’s two predominant trios!