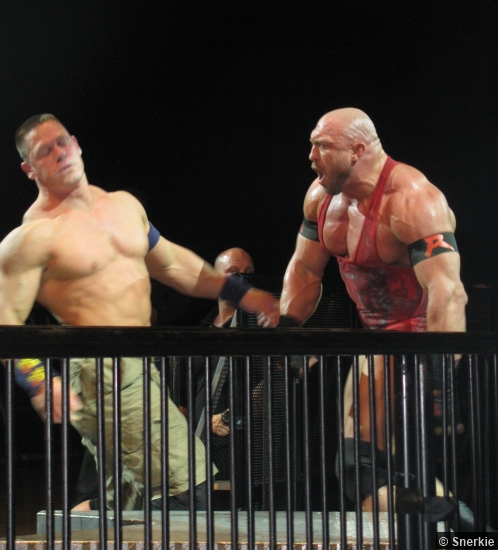 Down, But Never Out.

The 742nd edition of WWE Friday Night SmackDown came to you from the Time Warner Cable Arena in Charlotte, NC. After CM Punk pulled a quick win over The Wyatt Family’s Luke Harper on RAW, Daniel Bryan would be looking to one-up The Wyatt Family himself as “The Yes Man” would go one-on-one with Luke Harper on SmackDown! Is Daniel Bryan walking into another three-on-one assault or will CM Punk be waiting in the wings to assist Bryan like Bryan did for Punk on RAW?

For the first time since he was unexplainably attacked by The Wyatt Family on last week’s RAW, CM Punk opens the show on SmackDown. Punk says that The Wyatt Family has a problem and their problem is “The Best in the World” and, while he does not know why The Wyatt Family has a problem with him, but he really does not care because he is always looking for a fight. Punk continues, saying that he “squashed the biggest rat in the WWE” in Paul Heyman before bravely calling out The Wyatt Family! However, what Punk would get was the Intercontinental Champion and “Paul Heyman guy”, Curtis Axel, who says that Punk needs to shut his mouth because they have “unfinished business”. Axel explains that Punk put Heyman up in the hospital and he is there to make Heyman proud, saying that he asked SmackDown General Manager Vickie Guerrero for a match against CM Punk and the GM agreed, making the match for right now!

In a match requested by Curtis Axel, the opening match of the night would see “The Best in the World” CM Punk face Intercontinental Champion Curtis Axel in a non-title match. During the match, CM Punk would climb to the top rope for his signature elbow drop, but the lights would go out in the arena, signifying the arrival of The Wyatt Family. This would distract Punk long enough for Curtis Axel to hit the Perfect Plex on Punk, but Punk would kick out before hitting the GTS on Axel, scoring the win over the Intercontinental Champion. After the match, Bray Wyatt would appear on the Tron, but would say nothing, simply staring intently at Punk before blowing out his lantern.

In 6-Man Tag action, The Usos would enlist the help of Charlotte’s own R-Truth to combat all three members of 3MB. In the end, it was R-Truth hitting the What’s Up on Jinder Mahal en route to picking up the win for himself and The Usos.

The Divas were in action on SmackDown as Divas Champion AJ Lee would team with her bodyguard, Tamina Snuka, to face The Funkadactyls. In the end, it was AJ Lee locking in the Black Widow, forcing Cameron to tap out to pick up the win for herself and Tamina Snuka.

With a guaranteed World Heavyweight Title rematch awaiting him, former champion Alberto Del Rio would make an appearance to address World Heavyweight Champion John Cena. Del Rio says that he is a “world-class athlete”, which makes him better than everyone and he should still be the World Heavyweight Champion, but the title was “stolen” from him by John Cena. Del Rio continues, saying that if the fans were smart, they would see what Cena truly is, a “thief”, saying that Cena is walking around with something that he doesn’t “deserve”. Del Rio then claims that he was “sick” and injured at Hell in a Cell and he “begged” the doctors to not make him compete, but he has “pride”. Del Rio continues, saying that, after he takes back the World Heavyweight Title from John Cena, the “champ” will truly be “here”. World Heavyweight Champion John Cena then makes his way to the ring, saying that he feels “bad” because Del Rio is “sick”, telling Michael Cole to get Del Rio a card that plays Cena’s theme and reminds Del Rio of the beating he took at Hell in a Cell. Del Rio says that the champion is acting like a “stupid little kid” and he wants Cena to leave his show.

However, Cena dares Del Rio to make him leave, saying that he has got the champion in the ring right now, so they should have their rematch right now! Del Rio then says that he wants a referee and a doctor out there right now because he is going to take his title back and break Cena’s arm tonight! While both champion and challenger are ready for their rematch, SmackDown General Manager Vickie Guerrero has a different idea as the GM announces that Cena will defend the title against Del Rio in two weeks at Survivor Series. Cena says that Vickie has only done two good things during her time in the WWE and that is getting fired and when she occasionally “shuts the hell up”. Surprisingly, Del Rio agrees with Cena and the GM responds by putting both men in matches against monsters as Cena would face Ryback later on the evening while Del Rio would square off with The Great Khali right now!

Per the orders of Vickie Guerrero, the #1 Contender for the World Heavyweight Title, Alberto Del Rio, would go one-on-one with The Great Khali on SmackDown. In the end, it was Alberto Del Rio locking in the cross armbreaker on “The Punjabi Giant”, forcing Khali to tap out to pick up the win.

For the first time since he was assaulted by The Wyatt Family on last week’s RAW, Daniel Bryan was in action on SmackDown as “The Yes Man” would go one-on-one with The Wyatt Family’s Luke Harper, with Bray Wyatt & Erick Rowan in his corner. During the match, Daniel Bryan would catch Luke Harper in the Yes Lock, but before the damage could be done, Erick Rowan hits the ring, attacking Daniel Bryan. As Bray Wyatt climbs into the ring, Luke Harper & Erick Rowan soften Daniel Bryan up for their leader, but CM Punk would rush out and, together, Punk & Bryan would again dispose of Harper & Rowan, leaving only Bray Wyatt. However, Bray Wyatt would opt not to combat the two former World Champions, backing off and leaving with his “brothers”.

A rivalry would be renewed on SmackDown as the main event of the evening would see World Heavyweight Champion John Cena squaring off with Ryback in a non-title match. At the end of a heavy-hitting match between the two strongmen, it was John Cena fighting out of Shell Shocked and hitting the Attitude Adjustment on Ryback en route to picking up the win. After the match, Alberto Del Rio would prey on an exhausted John Cena as the former champion would pummel Cena before dragging the World Heavyweight Champion to the corner, slamming Cena’s surgically-repaired arm into the steel ring post, followed by a straight kick to the same arm. However, WWE’s resident Superman would fend off Del Rio, knocking Del Rio down in the ring, making Del Rio think twice about continuing his attack as the #1 Contender backs off for the time being.