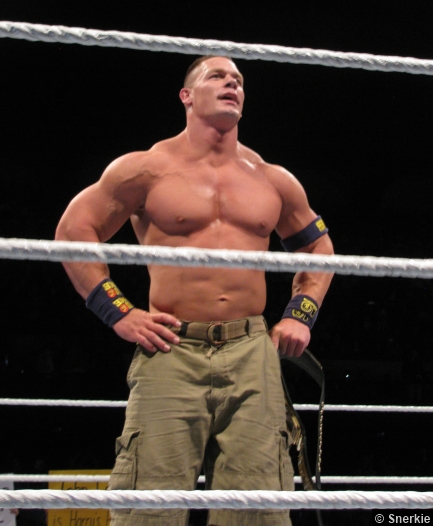 The Champs Are Here.

Five nights after Hell in a Cell, the 741st edition of WWE Friday Night SmackDown came to you from the Tampa Bay Times Forum in Tampa, FL. After a triumphant return at Hell in a Cell, where he defeated Alberto Del Rio to win the World Heavyweight Title, the brand new World Heavyweight Champion John Cena returns to the show where it all started for him over a decade ago!

For the first time since winning the World Heavyweight Title at Hell in a Cell and successfully defending his title against the now former “Mr. Money-in-the-Bank” Damien Sandow on RAW, SmackDown kicks off with the new World Heavyweight Champion, John Cena. After recapping his busy week, Cena proclaims that “the World Champ is here” and vows to become a regular on SmackDown. The new World Heavyweight Champion then dares anyone in the locker room to “come get some”. This brings out The Real Americans, along with Zeb Colter, who thanks Cena for defeating Alberto Del Rio and pushing Del Rio just that much closer to leaving the country. Colter continues, saying that Cena has a lot in common with The Real Americans, saying that Cena is a “real American patriot” and a “real American legend” just like himself, Jack Swagger, & Antonio Cesaro. Zeb then invites the World Heavyweight Champion to join their “struggle” and officially become a Real American! Naturally, Cena refuses the offer, calling Jack Swagger “Biff from Back to the Future” and making fun of Antonio Cesaro’s nipples.

After making fun of Zeb Colter, Cena says that The Real Americans are “full of B.S.” and all they need to do is look around to see the “real America”, advising the trio to march out of the arena before they make “trouble”. An angry Damien Sandow then makes his way to the ring, telling Cena that, in America, you make your own opportunities, but Cena would not know anything about that. Sandow continues, saying that Cena has been handed everything throughout his career before calling Cena a “false champion”. Sandow then declares himself to be the “uncrowned champion” and, from now on, his “sole purpose” is to end the “Cena era” in the WWE and he will do so by “any means necessary”. Sandow and The Real Americans then surround the World Heavyweight Champion, ready to attack, but Goldust & Cody Rhodes make the save, forcing Sandow and The Real Americans out of the ring. This leads to SmackDown General Manager Vickie Guerrero making a 6-Man Tag Match for the main event as World Heavyweight Champion John Cena would team with WWE Tag Team Champions Goldust & Cody Rhodes to face the team of Damien Sandow & The Real Americans.

The opening match of the night would see The Shield’s Dean Ambrose & Seth Rollins, with Roman Reigns in their corner, face Jimmy & Jey Uso in tag team action. During the match, Dean Ambrose would toss Jey Uso to the outside and Roman Reigns would hone in on Jey, ready to attack, but Big E. Langston would come out to even the odds and keep Reigns at bay. In the end, it was Jimmy Uso catching Dean Ambrose by surprise with a roll-up to pick up the win for The Usos. After the match, Dean Ambrose would attack Jimmy Uso from behind, tossing Jimmy out of the ring. Big E. Langston would then take Ambrose down and would set up for the Big Ending, but Roman Reigns would save his teammate, rolling Ambrose out of the ring. Reigns then finds himself face-to-face with Big E. Langston and The Usos, but the powerhouse of The Shield would refuse to back down! While Reigns was ready to fight, Dean Ambrose & Seth Rollins hold their teammate back, convincing Reigns to back off.

After The Wyatt Family viciously assaulted both CM Punk and Daniel Bryan on RAW, Bray Wyatt would be seated at ringside as Luke Harper & Erick Rowan faced The Prime Time Players in tag team action. In the end, it was Luke Harper catching Titus O’Neil with the Discus Clothesline en route to picking up the win for himself and Erick Rowan. After the match, Bray Wyatt would enter the ring, hitting the Sister Abigail on Darren Young before kneeling next to The Prime Time Players and telling them to “follow the buzzards”.

The Miz appeared on SmackDown for Miz TV, revealing that he was originally scheduled to have Shawn Michaels as a guest on Miz TV, but the Hall of Famer has reportedly left the building. The Miz then says that, had it not been for Michaels, then Randy Orton would not be the WWE Champion. This brings out the WWE Champion and the “face of the WWE”, Randy Orton, who says that The Miz is “wrong”. Orton then says that he proved at Hell in a Cell that he is “better” than Daniel Bryan before he says that The Miz is no longer “relevant”, that nobody cares about The Miz or Miz TV. The WWE Champion continues, saying that, when he beat Miz down a few weeks ago, the crowd nearly cheered him. Orton then says that, if he had it his way, then The Miz would be on the “unemployment line” with Big Show. Orton then reveals that, as a result of Big Show’s intrusion on RAW, the giant is now “banned from the WWE for life”! Orton then asks The Miz how that makes him feel, but when Miz starts to speak, the WWE Champion strikes with the RKO, leaving the outspoken Superstar out of it in the middle of the ring.

Then it was time for the main event as new World Heavyweight Champion John Cena would team with WWE Tag Team Champions Goldust & Cody Rhodes to face the team of Damien Sandow and The Real Americans, with Zeb Colter in their corner, in a 6-Man Tag match. In the end, it was John Cena hitting the Attitude Adjustment on Jack Swagger, pinning Swagger to pick up the win for the gold-clad team.