WrestleMania XV – The Death of the Big Boss Man

If you’ve been watching the Undertaker at WrestleMania for the past few years, you might be under the impression that the Phenom has been pulling match-of-the-year contenders out of his ass at this time of year for all of history.

Sadly, that’s not the case. There’s been some pretty flat out bad ‘Taker matches at WrestleMania, with his clash against Giant Gonzalez instantly coming to mind, but, as weird as a giant Mexican in a nude bodysuit is, none of them were quite as weird as what happened at WrestleMania XV.

The year was 1999; the beating heart of the Attitude Era, and all was well in the WWF. The Rock and Steve Austin were heading to one of the most important main events in WrestleMania history with Mankind and the McMahon family in brilliantly written and performed supporting roles. But that wasn’t the only McMahon involvement in WrestleMania that year.

Lower down the card, an awkward heel vs. heel feud had been underway for the past few weeks in which the Undertaker, leading his faction, the Ministry of Darkness, had been stalking Stephanie McMahon. The angle was played out with ‘Taker very much as the bad guy, harassing the McMahon family, whilst Vince attempted to bravely defend his young children. This would have been fine had Vince not, at the exact same time, been playing a grade-A prick in his feud with Stone Cold Steve Austin as the villainous Mr. McMahon, and had Shane not, at the exact same time, been playing an equally well-qualified prick in his feud with X-Pac. The fans were left confused and unengaged, not sure who’s side they were supposed to be on in this battle of two thoroughly unlikeable and unsympathetic groups; The Undertaker’s Ministry of Darkness, and Vince McMahon’s Corporation.

And so the match began.

And so the match ended; it lasted less than ten minutes, making it the shortest Hell in a Cell match in WWF/WWE pay-per-view history.

Now, that sounds pretty bad, and I said this wasn’t about the bad, it was about the weird and the silly, and the weird silliness was yet to come.

With the match won, the Undertaker summoned forth his minions, a faction known as the Brood, a three-man group that contained future superstars Edge and Christian and future fat porn-actor Gangrel. The three men, who were portraying weird, gothic vampires, probably influenced by the recent success of the film Interview With A Vampire (which was only five years old at the time, making it actually about ten years in the future in Vince McMahon years), descended from the rafters, landing on the top of the cell. They then passed a noose through the ceiling of the cage to the Undertaker, who then put the noose over Boss Man’s neck. ‘Taker then called for the cell to be raised, thus lifting Boss Man with it and effectively lynching him.

Now that’s pretty silly, but Boss Man wasn’t just raised kicking and gasping into the rafters, oh no, he died. He kicked and gasped and wriggled, and then he died. You can probably tell by my flippancy here that he didn’t actually die, but he DID pretend to die, in the middle of WrestleMania, doing a silly “I’m dead” face (Don’t Google Image search “Big Boss Man Hung” like I just did, seriously).

Of course, we now, sadly, live in a time when the Boss Man really isn’t with us, so the whole pretending to die angle somehow seems less fun, but, I think if the Big Boss Man would like us to remember him, I think he’d like us to remember that once, he wrestled the Undertaker at Wrestlemania, and he did a pretty impressive hanging stunt, and he did a silly face, and we loved him for it. 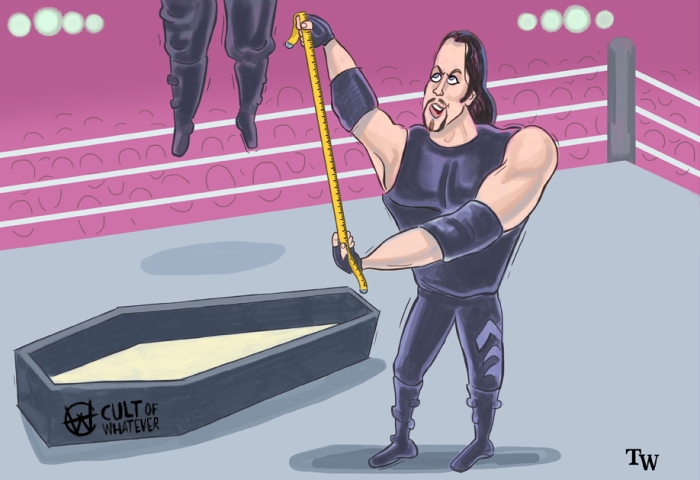