Every now and then I really, really question myself. There are a few things in the world I can find absolutely no redeeming qualities in what so ever, and yet they keep happening, apparently for the sake of entertainment. It makes me wonder if I’m fundamentally missing something, and then I talk to people, and they agree with me, and so I end up going insane meticulously hunting down someone, anyone, who thinks the thing I’m describing is, in any way, a good idea.

I’m going to be honest here, I don’t actually know the build-up to this match, and, frankly, I’m not going to be looking it up, because I just had to watch this thing, and it’s just too ridiculous for me to want to waste my brain with any more information about it.

The blindfold match in question was a brawl between Jake “The Snake” Roberts and Rick “The Model” Martel at WrestleMania VII in 1991 (that weird period in wrestling I talked about earlier). Now these were both great, great wrestlers we’re dealing with here, but their ability wasn’t the silly part of this, the silliness was supplied entirely by the match format, in which both men would compete with bags on their heads.

Now that sounds bad, right? Wrong, it’s 1991, which means the crowd thought it was just about the greatest thing ever. Seriously, watch the video on YouTube, that crowd’s reaction to two men walking around and falling over, if heard in 2012, would probably be in the top five crowd reactions of the entire year. Add possibly the greatest commentary team of all time; Heenan and Monsoon, and a terrible match becomes a silly and, dare I say it, a rather fun one.

Pro-wrestling at it’s most pantomime. 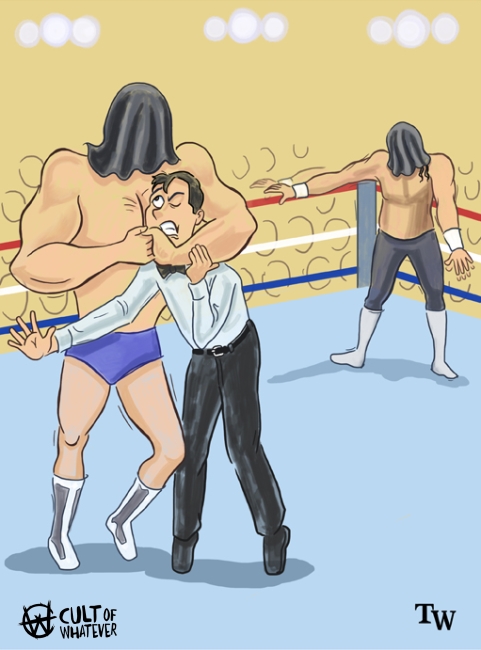