The early 1990s were a weird time for wrestling. The New Generation, made up of guys like Shawn Michaels, Bret Hart, Kevin Nash and Scott Hall, hadn’t really hit it off, and the Golden Age stars like Hulk Hogan were showing their first hints of over-exposure. One of the main results of this was a scramble to build new stars like the Ultimate Warrior, an understandable reaction to the circumstances. Another result was that the WWF started to go ever so slightly insane, as it was willing to try pretty much anything to see how it got over. Sometimes the results were bad, sometimes they were funny, sometimes they were great and at least one time, they were… uncomfortable.

The year is 1990, and Roddy Piper, already in his mid-30’s even at this point, is in a feud with former American judo Olympic medalist Allen Coage, wrestling under the moniker of Bad News Brown. If you hadn’t guessed from his ring-name, Brown was an African-American gentleman, and so started either the silliest or most mind-blowingly racist moment in Wrestlemania history.

According to Piper himself, in an interview he did with Wrestling News Live, the story goes like this;

Vince McMahon approached Piper to discuss the possibility of a Piper vs. Brown match at Wrestlemania VI. Piper agreed, but, not valuing Brown as much of an in-ring talent, he let it be known that the match would require a large number of promos to help build it up and, for one of these promos, Piper would like to have half of his body painted black as a sign of solidarity with black people around the world. Vince, being Vince and, due to it being 1990, probably being coked out of his mind, said he loved the idea.

It’s important to establish what we mean here by “painted himself black”. You may be thinking that he painted himself a shade of brown, or simply put on a large amount of fake tan. Oh no, he painted himself BLACK, as in the actual color, and, in true Al Jolson style, complimented the look by painting on white lips and having a giant white circle around his eye, because, as we all know, that’s what black people look like.

But even with all that, Piper didn’t reach “Your Granddad talking to you black friend” levels of awkwardness until he actually got into the ring (he entered doing a black power salute, obviously), half-blacked up, and started, oh yes, doing a little dance. ‘Cos ‘dats what we’s does mass’a. That wasn’t enough though, and Piper launched into a promo listing his, and I’m not exaggerating here, favorite black people from history.

Thankfully, the promo was over before Piper was able to reveal the fried chicken and watermelon buffet he had set up backstage, and the build for the match was over. When the match itself took place in Toronto, Canada Piper again appeared half blacked up, giving a black power salute and doing a “funky” dance.

I should be clear that I don’t think for a second that Piper was intentionally being racist, I just think he was accidentally being extremely thoughtless, a situation that soon became clear when the Toronto audience was polarized between those who were stunned by exactly what the hell was going on and those who were sick of waiting for the Black and White Minstrel Show to come out on DVD and found it hilariously funny to watch Piper effectively lampooning an entire race of people in a crude and failed attempt at promoting racial harmony.

Perhaps as a powerful metaphor for the lasting effects of racism on American society (or perhaps because he thought it was funny), the black dye stained Piper’s body for over a month thanks to a prank pulled by a disapproving Andre the Giant. 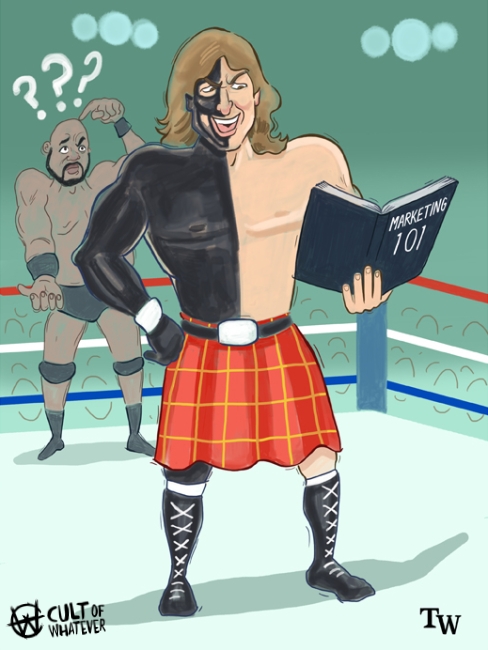