Chris Jericho is one of the greatest wrestlers of all time, having plied his trade around the world in rings across America, Europe and Asia, Jericho has been one of the most consistent performers of his generation.

Not only are his in-ring skills a delight to behold his work on the microphone is second to none. However, Jericho last featured in WWE in September last year.

Since then the Canadian grappler swapped his wrestling boots for some dancing shoes featuring on the US version of Dancing with the Stars. He has also been on tour with his rock band Fozzy, and we caught up with Chris during the European leg of the tour for an exclusive interview. 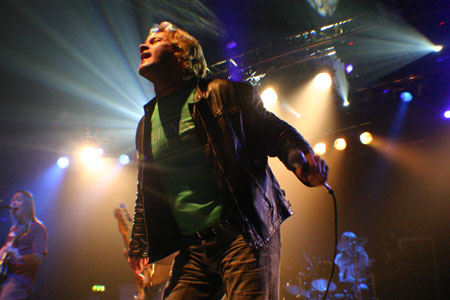 Hi Chris, thank you for taking the time out to talk to us today, first things first, how has the tour been going?

The tour has been amazing; we have played across Europe at several venues and festivals. We are in Germany at the moment and looking forward to coming back over to the UK for a couple of shows.

It’s been a blast and this tour has taken us to lots of different countries that we have never been to before, Denmark, Switzerland, Belgium and Holland. It has been really cool to see the reactions of all the fans where we haven’t performed before. We have a great worldwide fan base and we are very fortunate for that.

You have already played a few UK gigs on this tour, are you looking forward to coming back over to these shores?

It has been really cool for us over the last five years, the UK and more specifically England has been like a second home for us. It was really the first country that helped to break Fozzy and take us to a whole different level.

As a wrestler, you performed all over the world, America, Germany and Japan. Is there anywhere you haven’t performed with Fozzy where you would like to?

Yeah, we would really like to go to Japan. That is the one place we have never actually been to. We have been wanting to go there for a few years but it just hasn’t worked out as of yet. Hopefully we’re going to go there in December of this year after we come back to the UK again in November.

Growing up and even now, what bands have you and Fozzy been influenced by?

I’m a huge fan of The Beatles, they are my favourite band of all time and I think that any band that has any kind of melody or harmony that stems from The Beatles. I love Metallica, Iron Maiden, Ozzy, The Police, KISS, AC/DC, Rush, there’s a German band called Halloween and a Japanese band called Loudness. I have a pretty good range of influences.

Rich Ward, who I write a lot of the music with, he is into all of those bands and he’s keen on his 70’s rock and that carries a lot of melody for us as well. We are a very heavy band and have a lot of melody and harmony in what we do. 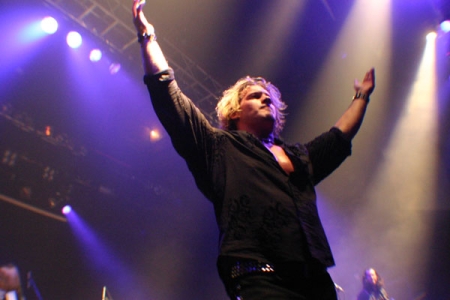 Are there any similarities/differences between the wrestling crowds and the fans that come to see Fozzy?

There have always been two separate interties; a lot of people come to the gigs that are Chris Jericho fans, which is cool. The thing with wrestling and music is that they are both very high intensity in the form of entertainment, they’re both very aggressive and very energetic.

When you get that type of vibe from the audience it is easy to give it back and vice-versa, we really take pride in the fact that we’re very high intensity, very energetic, very shall I say fun shows with lots of crowd involvements.

You have to really connect with the crowd when your either playing with the band or wrestling or anything you do, we take great pride in being able to do that and I think that is one of the reasons why we have done as well as we have over the last few years, why we keep continuing to grow after doing this for 12 years.

You have also stared on both the small and big screens away from wrestling, are there any more plans to do more television or film work?

I would love to do more acting. Obviously, when you work in WWE as a wrestler you act and I’ve played a character for years. I enjoy that and love playing a part or character, so that is the one thing I would like to do more of for sure.

I haven’t wrestled in WWE since September, so I have a lot more time to do some of these things that I’ve always wanted to do and I think that acting is next on my list of something I want to get more experience in.

With that being said have you ever talked about doing an Anvil type documentary with Fozzy?

Yeah, ours will be a little bit different to Anvil, but we actually filmed our entire tour of the UK and France that we did last October and we’re putting together a DVD cool documentary from that which will be coming out late this year, early next year. When you get to do as much touring as we do, getting to go around the world and seeing all these great countries and meeting great people you defiantly want to share those experiences with as many people as you can. There is a lot of stuff in the works; we’re getting ready to work on a new album.

You have a degree in Journalism as well, is that a path you would look to go down in the future?

No, not really, I took journalism classes because I graduated from high school when I was 17 and I couldn’t go to wrestling school until I was 18, so I went to college to get my journalism degree. I had it figured out early on that I would rather be the person that’s being written about than the person doing the writing.

It was fun and I enjoyed it and I still enjoy writing, I have written two books, which have both been New York Times bestsellers, and doing a journalism degree defiantly helped with that.

Your dad (Ted Irvine) was a professional NHL ice hockey player, where you ever interested in other sports when you were growing up or was it always wrestling for you?

When I was a kid I wanted to be in a rock ‘n’ roll band and I wanted to be a wrestler, those are the two things I focused on my whole life. I played hockey for a bit, but I just wasn’t really any good, I was to busy going to band practice and never really paid much attention to hockey.

I love watching it but as far as playing it, I was always far more interested in playing music and then I got into wrestling after that.

Chris Jericho and Fozzy will be back in the UK on Sunday 17th July at Dingwalls, Camden. For more information visit Dingwalls.com & Fozzyrock.com