How to Become the World Champion in 1,372 Easy Steps

In 2007 Chris Jericho released his monolithically titled memoir ‘A Lion’s Tale; Around the World in Spandex’, a book that was responsible for yours truly becoming interested in wrestling autobiographies. That book recounted everything in his life up until his WWE debut and left the reader in suspense, as it literally finished the second before he debuted. Fans had to wait another four years for this equally monolithically titled sequel ‘Undisputed: How to Become the World Champion in 1,372 Easy Steps’ to arrive. Was it worth the wait? 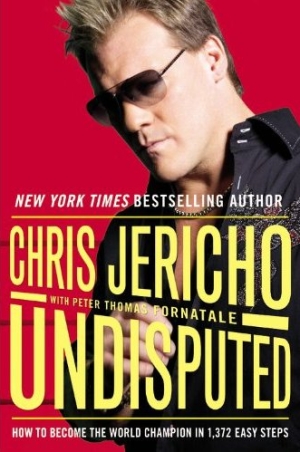 Well to be put bluntly it was worth the wait. However I should warn you that before you decide to sit down and read this, you must read ‘A Lion’s Tale’. Jericho references it throughout the book, constantly advising the reader to go out and buy it in order to explain certain anecdotes.  Any time he mentions ‘A Lion’s Tale’ he suggests that the reader should go out and buy it – it’s endearing initially but it begins to wear on you after a short time. Most of the time when he is trying to be funny it comes off as genuinely hilarious but with plugs like these it feels like he’s trying too hard to be witty. It could be because he uses a lot of 80’s puns and references which will just go over your head unless you lived through or have knowledge of the 80’s. Actually you would have needed to have read the first book to even understand the title of this autobiography. The ‘1372’ refers to how many matches Jericho wrestled before he became champion.

The book does have a serious side, namely the deaths of Chris Benoit, Eddie Guerrero and Jericho’s mother. The difference in tone between the three is shocking. The death of his mother is touching but starkly contrasting it is the death of Benoit. The account of Benoit’s death is harrowing to the point of being almost uncomfortable to read. But what’s odd is that Eddie’s death is almost lost in the mix between the two. I know Eddie’s death was hard on Jericho and I’m not challenging the notion but compared to the two extremes of his mother’s death and Benoit’s death, Eddie’s death just comes off as…unremarkable.

Maybe I should put how much I enjoyed this book into context – I spent time I should have been studying for a major exam in a rather hard class reading this book. It’s just that good, but is it as good as ‘A Lion’s Tale’? Well, the answer to that is no, it simply couldn’t be or so says the law of diminishing return. What was great about ‘A Lion’s Tale’ was that Jericho was recounting a journey to realizing his lifelong dream; we experienced his trials and tribulations with him. In ‘Undisputed’ he’s realized his dream, so he’s just living it, there’s no satisfying conclusion. He tries to recreate the same journey with the rise of his band Fozzy but it’s not the same and there’s no satisfying payoff for the reader. The book also covers a considerably shorter amount of time which taints it. ‘A Lion’s Tale’ covers 30 years; ‘Undisputed’ covers 8. If Jericho writes another book (and he hints that he will) it’ll most likely cover an even shorter amount of time which will be a further detriment.

So in conclusion it’s not as good as ‘A Lion’s Tale’ but only marginally. I enjoyed it and even though it’s not as exceptional as the first it’s still one of the best wrestling autobiographies ever written. There are so many good things about the book that any criticism I can think of is almost nitpicking. Just like after finishing ‘A Lion’s Tale’ I’m anticipating the sequel to ‘Undisputed’…