Standing SEVEN FEET tall and weighing in excess of 400lbs, from the moment he stepped foot in WCW, the man who would become world-famous as The Big Show was creating an impact. Winning the WCW World Heavyweight Championship in his very first wrestling match, from Hulk Hogan no less, catapulted this gargantuan unknown into wrestling folklore.

Paul Wight, the man behind the character, sits down to tell us about his childhood, his battle with acromegaly (the same condition that affected Andre the Giant), basketball stardom and his career in the wrestling business. Hear from the man himself what it’s like being a giant in the “real” world and listen as his peers give us their thoughts on both Show’s in-ring skills and the man away from the ring.

Marvel at a man of his size leaping from the top rope, be in awe of his natural charisma and comedic timing and simply sit back and watch 22 matches from his days in WCW, WWE and, ahem, ECW.

It’s a giant’s world alright… and it’s time to meet the giant who dominates it. 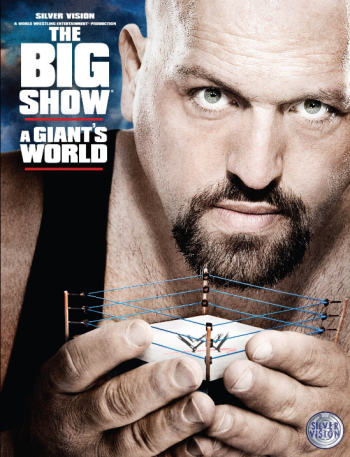 The first thing that you’ll notice with this set is the nice little homage to Andre the Giant on the title screen as Big Show is pictured carrying The Bella Twins, Eve and Kelly Kelly in his arms much like the famous shot of Andre from early in his career. The second thing you’ll notice is that the documentary portion of the DVD set is only around 50mins long.

Now, for someone who has enjoyed a sixteen-year run in the wrestling business (and been a name wrestler for that entire period), giving less than one hour to cover his childhood, his family life, his basketball talents and his time in WCW and WWE, is nothing short of insulting.

What is here is very well presented, however, with Show being a great interview subject and the talking heads chosen all being relevant for varying reasons. Among those giving their two cents are Arn Anderson, Chris Jericho, Triple H and William Regal, as well as his smoking-hot second wife, Bess.

I enjoyed the documentary, but wish it was at least another hour to cover more aspects of his career. The nWo is barely mentioned, his runs as WCW Champion feature briefly (in fact, his entire WCW run is covered briefly), as is his time with Undertaker, and there is literally zero mention of JeriShow or Show-Miz, even though both teams feature in the matches on disc three… which is even more baffling as his time spent in OVW is mentioned, with footage of him manhandling the pre-Batista Batista too.

It’s disappointing, not because of the content included or the subject matter, but because there’s not enough content to do the guy justice.

A lot of extras on disc one, with the highlights being the story of Show mimicking The Godfather and why his wife was the main ho, his dad’s funeral from Smackdown because of how genuinely (and unintentionally) hilarious it is and Triple H’s stories from the locker room; they are genuinely laugh-out-loud funny… especially the one about Big Show being covered in nacho cheese.

As for the matches, there’s a great selection covering a variety of opponents, with the highlights being the battles against Stone Cold, Floyd Mayweather and, surprisingly, Sabu, while his matches as part of Show-Miz and Jerishow are also a great reminder of how awesome he was in the tag-team enforcer role.

Other matches worth watching again are his run-ins with Sting, Undertaker, Kurt Angle, Brock Lesnar, Eddie Guerrero, RVD and his great run as the tag-team partner of Kane. The less said about the Sumo-Truck Match, however, the better we’ll all be. Also, as an aside, if you’re going to book someone as this monster who is larger than anything you’ve ever seen, don’t, in the same match, book a run-in from a guy (in this case The Yeti) who is actually – and obviously – larger than the wrestler you’re trying to push.

Dubya-cee-dubya sure messed up there… and in The Giant’s first appearance too.

Oh, and the segment where he returns to Smackdown during a Lumberjack Match between Eddie Guerrero and Kurt Angle is one of those “big man kills everyone” spots that just work so well. Seeing Big Show kill Angle, Eddie, RVD, Booker T, Luther Reigns, Bubba Ray, D-Von, Spike, Charlie Hass, John Cena, Rey Mysterio, The Mexicools, Hardcore Holly, Nunzio, Scotty 2 Hotty and The Bashams is quite the event to witness.

I recently reviewed the Chris Jericho collection and praised it as one of the most comprehensive profile releases WWE has ever done. A Giant’s World is the exact opposite, with whole swathes of material missing, leaving a sense that this is only part one of a multi-release set, even though I know that isn’t the case.

One of the most interesting part of the main documentary is the chapter that covers Wight’s personal trainer, Dodd Romero. He’s the guy responsible for changing every aspect of Big Show’s training regime, from stretching, cardio workouts and diet to actually getting the guy to ride a bike every day (and Dodd’s bike, where the peddles have been replaced by a cross-trainer, is a work of genius), and it shows how effective he has been.

A very candid interviewee, Big Show could sit and talk for hours and be entertaining, so it’s a shame this is less than one. Not an essential purchase, but if you can get it for between £7-10, then it’s worth getting. The quality and quantity of matches add two points to the total score below.

On a final note, when Show lands the literal one-handed version of his chokeslam, it’s an awesome sight to behold.