By Paul Kelly
Wrestling Book Reviews
This page contains affiliate links. At no additional cost to you, we may earn a commission if you click through and make a purchase. Learn more

Andre the Giant, one of the few true legends of professional wrestling. The first  wrestler to truly cross into the mainstream, could there be a better person for the WWE to release a biography about? Is it even possible to write this book and for it to be less than astounding? It turns out yes. 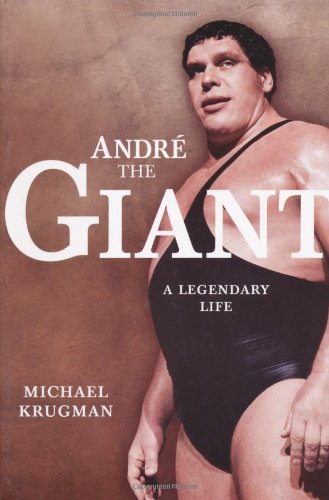 Don’t get me wrong, this book is actually very good, but the way it mixes kayfabe and reality means it never quite hits either mark well, something it has in common with The Rocks book. Though this is light years beyond in quality.

The book starts with Andre’s childhood, though the information is scarce. Although to be fair there isn’t much information around, how many people are alive who remember him as a child? What is interesting in the book is the details on how Andre was backstage, the people he admired and the ways he could control people around him. If written about almost anyone else they would have came over as a bully, but Andre somehow came over as incredibly likeable. The first hand accounts show a man full of warmth for those he trusted, and a cautious but polite man to those he didn’t know… on the other hand if he didn’t like you then he never stabbed anyone in the back, he told you to your face and let you go with it!

The problems within the book, besides the kayfabe mix, are the lack of true detail about Andre away from the ring, though it certainly gives the impression that Andre actually had no life away from wrestling. Also I wasn’t fond of the constant ‘match reports’ that again are half kayfabed, it just felt like it was there just to pad out the lack of information on Andre. Though no doubt some people will actually see that as an advantage, mostly people who didn’t see anything of Andre first time around admittedly.

One nice, and surprising, moment in the book is a comment from Vince McMahon on Hogans claim to have had the idea of slamming Andre in their Wrestlemania match, saying Hogan had no say or ideas whatsoever in that match and Andre called it from start to finish. That was something I had head said before but could never find again, so finding out I’m not crazy was good.

And I know its childish, but one line left me chuckling for ages:

‘Andre is howling ”No! No!” while pointing at Jake’s sack.’

Yeah, I’m a child at times.

Overall this book is worth the price of £12.99 if you aren’t hugely familiar with Andres work and history, but if you watched this era, or indeed have the PPVs on tape, then I wouldn’t bother unless you just want to pad out your collection of wrestling biographies/autobiographies. It’s closer to The Rocks than Dynamites, though it’s far superior to Hogans.