By Henry Higgins
DVD Reviews
This page contains affiliate links. At no additional cost to you, we may earn a commission if you click through and make a purchase. Learn more

A desperate fight promoter convinces a hulking church handyman to try his hand at wrestling in this sports comedy starring famed WWE wrestler The Big Show. As the dimwitted grappler rises up through the ranks on a mission to fight for orphans everywhere, the conniving promoter uses the winnings to settle a debt with his corrupt nemesis. 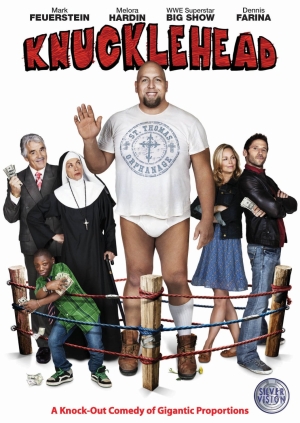 WWE Studios, Vince’s latest and longest-running non-wrestling project, has taken a lot of flak ever since they began churning out movies. Firstly, they were given co-producing credits on The Scorpion King, The Rundown and Walking Tall, all of which starred The Rock and, in reality, the credit was really just for allowing him to be used. From there, the company went solo and put out a series of films that, while not troubling the awards season, were good no-brainer action/horror films that included The Marine, 12 Rounds, See No Evil and The Condemned. Possibly the most important aspect in all of this is that every single WWE Studios release in the action/horror genre has made a profit, mostly from DVD sales.

All of that changed however with the release of Legendary, the John Cena-starring melodrama, which tanked at the cinema (mainly due to the intentionally small release – one weekend in very few cinemas – that was required for contractual obligations) and, more importantly, failed to do any real business on DVD. It seems that, once again, the curse of McMahon going outside a comfort zone has come back to haunt him/his company.

Now it’s the turn of comedy to appear on the radar with Knucklehead, the “zany” comedy starring Big Show as a kid who has been in an orphanage all his life and is now a thirty-something adult male that stands 7ft tall, but has a “charming” naivety. Can WWE Studios succeed with comedy where they failed with drama.

The short answer is no, they cant. Anyone who has followed Big Show’s career will know that the guy can be very funny and has great comedic timing (his stint on Saturday Night Live was immense), but when you’re saddled with a horrible script, lame jokes and a sense of seen-it-all-better-before, even the greatest of comics, the greatest of actors, are going to struggle.

To see Melora Hardin, Dennis Farina and Will Patton (who is one of my favourite actors of all time) lower themselves to this, is enough to make a grown man weep. Sitting through the 90min running time is also enough to make a grown man, a grown woman, a child, a dog or a fermenting corpse weep at the utter ineptitude of the writers and a director who shone when helming episodes of The X-Files, Lois & Clark, Monk, Numb3rs, Dirty Sexy Money, Law & Order, Prison Break, Smallville, CSI, Warehouse 13 and Caprica, but fails miserably when it comes to a movie shoot.

The film starts with a semi-decent bait-and-switch, but it’s downhill from there until the credits roll. Some good ideas are implemented horribly and the fight scenes are pathetic. With this also being aimed at kids, some of the themes on show are a bit strong (bare-knuckle fighting, extortion, crooked fight managers, etc).

In a nutshell, the film misfires at almost every opportunity and is one of those that will be the skeleton in the closet of all involved.

As this was a review copy, there were no extras available at this time.

An embarrassment to everyone involved, this movie deserves to be buried alongside all the Atari 2600 E.T. Cartridges and never mentioned again.