WWE: Are we there yet? Book Review

By Dan
Wrestling Book Reviews
This page contains affiliate links. At no additional cost to you, we may earn a commission if you click through and make a purchase. Learn more

WWE: Are we there yet? is a new book published by WWE Books, in this book WWE Superstars such as Big Show, Ric Flair, Kane, Paul Heyman, Sgt. Slaughter to name a few, share some of their stories from travelling on the road. The book gives wrestling fans an up close and personal look at some of the biggest names in wrestling. 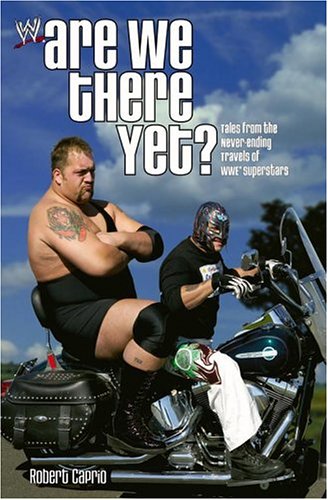 It’s a well known fact that travel and wrestling go hand in hand, it’s something that is essential in the wrestling world. Going way back in time, wrestlers have always travelled, when the American wrestling industry was built around regional territories, wrestling greats would travel from territory to territory wrestling in towns all over the United States.

Nowadays some may argue that the schedule is a lot easier for wrestling superstars; no longer do they have to share bedrooms in some dodgy motel in the middle of nowhere, while this may be true, life on the road for WWE superstars in not as glamorous and luxurious as some may think.

This book goes into details, with superstars sharing their experiences from travelling, with funny, revealing and truthful stories.

To be honest, it’s going to be really hard for me to review this book without spoiling and giving too much away. So I’ve decided to give you a few snippets of my favourite stories from the book, that way, I won’t spoil it too much for you, but you can get a good feel for what the book is like.

One story that I found quite funny was when The Coach, everyone’s favourite announcer talks about the time Vince McMahon had him arrested. Jerry Brisco asked Coach to run a NFL football pool just before the start of the NFL Football season in 2000. Coach and the WWE were in North Carolina at a Pay Per View event, Coach had been handing out sheets for the NFL Football pool he’d been asked to organise, from here I’ll hand it to The Coach:

“About four-thirty that afternoon, our head of security at the time walked into the pretape room, which is where I hang out on the road, and told me he needed to speak to me out in the hallway. When I walked out there I could see he had a couple of troopers with him. I had no idea why they needed to talk to me because I knew I hadn’t done anything wrong

‘We have a little problem here, Coach’

‘These two men have a warrant for you arrest for illegal gambling in the state of North Carolina.”

The story is not over there, as Coach goes on to explain further into his story;

“He looked at me and shook his head in disgust. I was humiliated. Now there’s one cop in front of me, one behind me, and Vince and Brisco about ten feet behind him. I could see the cop car outside and was like thirty feet from the door, and in a spot where about three hundred fans could see me. They escorted me out there, opened the car door and locked me in”

The story is not over there, but you’ll need to read the book to find out the rest. This is a must read story and is so funny it will certainly bring a smile to anyone’s face.

Now, you’d think that Unforgiven 2003 would have be a very happy night for Goldberg, not only did he win a match against Triple H in the main event of the evening, but he also won the WWE Heavyweight Championship for the first time. So what could possibly spoil this evening for the new WWE Champion?

“We roll into the hotel a few hours later, about three in the morning, and when I go to check in the guy at the front desk starts giving me attitude right away. I only explained that I had called during our drive to upgrade and he just starts yelling at me.

‘Who did you speak to? There is no one here but me and I have no record of an upgrade for you. You know, now I that I look at it, I don’t even have you booked for a regular room’

“I questioned him how that’s possible if I just spoke to someone else who told me I was all set, and he snaps back at me to watch my tone. Now I was annoyed for sure, but wasn’t yelling or anything yet. My girlfriend is asking me to calm down, not that I was hot, but she knew I was getting there. She knows me too well”

Certainly not the way you’d like to spend a special night, having a verbal dual with a hotel clerk, but surely Goldberg wouldn’t stand for that!

“With the two of us basically shouting at each other, a security guard who had just shown up on the other side of the lobby makes his way over. This guy knew who I was and was cool. He asked me to explain what was going on so I did. The clerk became enraged as I’m telling the story.

He starts blasting at me, ‘I don’t care who you are! I don’t care!’ Then he tried to jump over the counter to come at me!”

So with the prospect of having another battle on his hands, you’ll have to read the book to see what Goldberg did!

For me though, the best story in this book involves another former WWE superstar, Rico! Basically Rico was travelling home to Las Vegas after being on the road with the WWE for a number of days, he was travelling first class on a plane after his original flight had been delayed. Anyway, as Rico was relaxing, an air hostess approaches the WWE superstar, not for an autograph, but for help. A passenger was being abusive to other passengers, physically attacking one passenger:

“The moment she moved the curtain aside, I see this guy smack another passenger all the way in the back of the plane. She wasn’t kidding. When I replay this scene in my head these days, it reminds of a movie. The kind of scene when the camera goes from a wide shot and zips into a tight shot on someone. I saw this guy whack somebody and I zeroed in on him. Nothing else on that plane mattered.”

“I took off and shoved the stewardess down one of the aisles without even realizing it. The puncher had his back to me, so I grabbed him from behind when I got to him. The first thing I couldn’t understand was that he’s smacking other passengers around, and no one is doing anything about it!”

I started yelling at him to get up. He began to cry. I had no idea what he’s thinking right now, so I put my foot on his neck to keep him in place. I didn’t want to take any chances. I went back to my old cop mode, wanting to make sure everyone was safe”

Its not quite over there, but I won’t spoil anymore for you.

With many wrestling books nowadays they often look at serious problems in wrestling, whether it be politics in wrestling, drugs, and deaths, the books are often serious and some what intense. This however is completely different, its for the most part quirky and very funny. Its not a book you’ll pick up and want to read and read all in one afternoon, well at least I never, its something you might read for half an hour, then come back to it the next day. I found it to be a light read, and the way its set out enables you as a reader to more or less put the book down at any point you wish.

It certainly not the best wrestling related book I’ve read, but its not the worst by any means. Its about 225 pages, so won’t take too long to read. If your going on holiday and want a book to read on the beach, or even on the plane, this book would be ideal. The stories are funny, yet quite revealing, with some serious aspects to the book.