This UK PPV was exclusive to the UK fans, held in Manchester M.E.N. arena , it really wasn’t to too bad considering it was a UK PPV. Although the Rock or The Big Show did not attend the PPV  featured some top superstars such as Steve Austin, HHH, Undertaker and many more, and they all came to the UK with one thing in mind “No Mercy”. 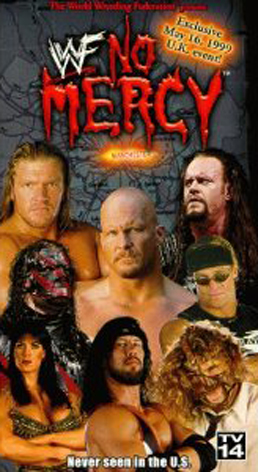 The PPV was in the midst of The Corporate Ministry angle and the whole card was based around that angle.

The PPV was actually not that bad, the bad parts were not that bad and the good parts not that good. The worst part in the whole show was GILLBERG match. The match was of terrible standard and if the real man could see it I bet he would not have been too pleased. Another part which took the PPV down was KANE vs. MIDEON. As you would of thought it was not Kane it was Mideon who was poor. Mideon is a good wrestler but I think his standard clashed with Kane’s and which in turn produced a terrible match. The out come was even worse than the match, due to interference from The Corporate Ministry.

The good point’s, Well I actually thought that the BROOD vs. THE ACOLTYES & VISERA was a good match. The highflying moves from Edge and Christian really contrasted with the Heavy moves of Visera and Co. This match really got the crowd on there feet and was not bad. The European champion Shane O’ Mac took on the highflying X – Pac in a decent match which really should that Shane can pull of a good match. Once again interference from Undertaker and friends would cost him, X-Pac the match.

The main event pitted HHH & UNDERTAKER of the Corporate Ministry against Steve Austin in a 3-way match for the WWF title. The match was solid through out and the No holds barred rule was used Undertaker and HHH doing the usually tactic teaming up then fighting each other got them over especially HHH as a Mega heel. As Austin started to get the advantage the Whole Ministry came out to aid Taker and HHH. But then all the Superstars which the Corporate Ministry robbed earlier came out, Kane, Mankind, X-Pac and more all came and a big brawl happened. I won’t tell you who won, but what I say is I didn’t know X-Pac was allowed to drink beer.

Overall the card was watch-able if I paid what ever it was on PPV I would have been satisfied so it is worth the money.