Hey folks, HSM back with another DVD/Video review, No Mercy took place on October 19th 2003 and was a Smackdown Pay Per View production. The main event of the evening featured Brock Lesnar vs. The Undertaker in a first ever Biker Chain match for the WWE Championship. This Pay Per View also featured another first however, the first ever Father vs. Daughter match in which Vince McMahon went head-to-head with his daughter Stephanie. Just how good was this Pay Per View? Well read on to find out. 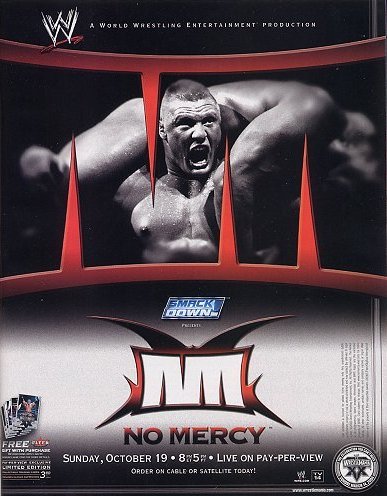 The show opens with Rey Mysterio vs. Tajiri for the cruiserweight championship. This was a fast paced and very entertaining opener, which certainly got the crowd going. As you would expect there was plenty of high flying from Rey and plenty of stiff looking kicks from Tajiri. This was actually given a fairly decent amount of time unlike most cruiserweight match ups, which are usually only given a few minutes. After plenty of near falls and impressive reversals Tajiri manages to pick up the win after a distraction from two people trying to enter the ring from the crowd. At the time these two men were unknown but on the subsequent Smackdown they were of course revealed as Akio and Sakoda, Tajiri’s two henchmen. All in all a good opening match.

Next up is Chris Benoit vs. A-Train. Considering this match involved A-Train it wasn’t too bad. A-Train spent much of the match dominating Benoit with his rather dull and uneventful power based offence and of course as is standard with any match involving Chris Benoit we had the numerous references to his “surgically repaired neck”. There was one particularly nasty spot however when A-Train brought a chair into the ring and picked Benoit up over his head. He then proceeded to accidentally drop Benoit head first on the chair, which looked very nasty, so much so that A-Train can be heard saying “You alright?” to Benoit quite clearly. After lots of A-Train offence Benoit manages to pick up the win via the Sharpshooter after A-Train counters his Crossface attempt.

Zach Gowen vs. Matt Hardy is next. Another pretty entertaining match-up and some of the moves that Zach Gowen can pull off are very impressive its just…I’m not sure really. I just never seem to get into any match involving Gowen, I’m not sure why but I just can’t. Zach Gowen pulls off the victory after a moonsault to end the match. Not long after this match Matt Hardy jumped to RAW and frankly who can blame him after being booked to lose to a one legged wrestler?

Next up it’s The APA vs. The Basham Brothers. The dull and boring APA versus the erm…dull and boring Basham Brothers. How these two teams can get on the PPV but The World’s Greatest Tag Team doesn’t is beyond me. I suppose this wasn’t really a bad match, just a match that didn’t really interest me that much as I find both The Basham’ and The APA to be very unexciting. The APA should have been retired long ago and The Basham’ are just two average wrestlers who happen to look a little similar. This was your standard TV tag match really, nothing more. The usual one-man beat down and the resultant hot tag etc etc. The APA have the upper hand and the match in the bag until Shaniqua returns and nails Bradshaw with a nightstick allowing the Basham’ to get the win. After the match we get an interview with the victorious Basham’s where Shaniqua rather hilariously blames her new ‘enlarged’ chest on swelling from Bradshaw’ clothesline from hell. That’s a new one on me anyway.

And so we come to the first ever Father vs. Daughter ‘I-Quit’ match. It’ hard to think of anything positive to say about this match. To be honest it shouldn’t even be on TV let alone on PPV but of course with the McMahon ego’s as big as they are not only does this match take place on PPV but it is one of the most heavily promoted matches on the card. This wasn’t so much of a match but more of a long drawn out squash as Vince spends the match beating around his daughter. Stephanie rallies briefly after using a steel pipe, which was brought into the ring by Sable and actually gets a couple of very close near falls but it doesn’t last long and the match ends when Vince chokes Stephanie with the steel pipe and Linda McMahon throws in the towel as Stephanie refuses to quit. After watching this match again I can still find nothing positive to say about it.

Now we come to John Cena vs. Kurt Angle, a match I was looking forward too and it didn’t disappoint. There were lots of conflicting Angle and Cena chants throughout this match, which gave it a pretty good atmosphere. I really enjoyed this match, as I’m a fan of both Cena and Angle and enjoy watching them both. This was a pretty fast paced match up with plenty of back and forth action and the crowd seemed to be really into it. I did wince however when Cena power bombed Angle onto the top turnbuckle, which caused his neck, hit directly on the turnbuckle. Both Cena and Angle kick out of each other’s finishers Kurt even manages to kick out of a shot to the head from his own medals. Angle then manages to lock in the Angle lock and Cena taps to give angle the hard fought victory.

The US Championship is defended next as Eddie Guerrero takes on The Big Show. Eddie was still seriously busted up after Big Show attacked him on Smackdown 3 days earlier. His back was literally covered in cuts and bruises from when Big Show slammed him onto the glass covered bonnet on his low rider. This is almost a squash as Big Show dominates the majority of this match and spends much of the time beating Eddie up. The ref gets nailed by a Big Show leg drop which triggers a series of near falls for both men but Show eventually gets the win after hitting his second choke slam of the match to win the US title. A strange match really as even though Eddie was the champ he was made to look inferior to the challenger through the whole match.

To round off the show we have Undertaker vs. Brock Lesnar in a Biker Chain match for the WWE Championship. A Biker Chain match is basically a regular match with a chain on top of a pole in the corner and the first person to get to the chain can use it in the match, simple really. This was a pretty standard match really with Undertaker using his slow methodical offence and Brock spending most of the early part of the match on the defensive before making a comeback and the action switches back and forth a few times. To be honest it’s a pretty slow match and as a result the crowd are fairly quiet for the most part. The Undertaker eventually goes for the chain but as he does so the lights go out and the distraction is enough for Brock to intervene. ‘Taker then hits a nasty looking piledriver on the steel steps which gives him another chance to go up and get the chain but Brock manages to get up and stop him just in time. After what seems like forever the FBI do a run in and attack ‘Taker but as usual he sends them all packing. ‘Taker then hits the last ride and goes up to get the chain but once he grabs it Vince McMahon appears from nowhere and push ‘Taker off the top rope. Brock then uses the chain to knock ‘Taker out and gain the pin to hold onto his title. This was an OK match but to be honest it went on far too long and as a result became quite boring.

Not a huge amount of extras on the DVD but a decent albeit short match from Sunday Night Heat.

This was a fairly average PPV with John Cena vs. Kurt Angle being the pick of the card for me and the cruiserweight match was also pretty good. The Biker Chain match was good but in my opinion it went about 10 minutes too long. The I-Quit match was just horrible to watch and the rest of the card was frankly nothing special. The DVD extras are ok but there could have been more. If you haven’t seen this PPV before then it’s probably worth getting hold of a copy, if you have already seen it then frankly I wouldn’t waste my money buying it to watch again.