No Mercy began life as a UK-only PPV event in May of 1999. Tiger Ali Singh defeated Gillberg in a minute in the first match of the first No Mercy. It was a dismal beginning, but things picked up five months later when the first “real” No Mercy PPV aired in the US (and across the world). That show featured X-Pac proving he belonged with the big boys by defeating Kane and the APA in a four-corners elimination match and Triple H defeating Steve Austin, but will always be remembered as the event where Edge, Christian, Jeff and Matt made their names and created their legacies in one of the best ladder matches of all time. 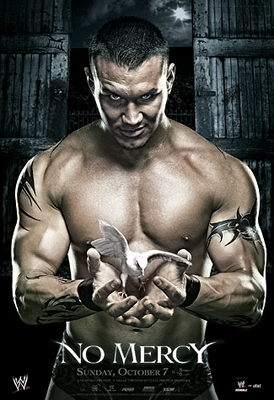 From there, No Mercy became an October PPV tradition and showcased such bouts as Chris Jericho defeating The Rock for the WCW Title, Steve Austin winning against both Kurt Angle and RVD in a heated Triple-Threat, Kurt Angle & Chris Benoit facing off against Rey Mysterio & Edge for the newly created WWE Tag Team Championship (currently held by Miz & Morrison), Undertaker v Brock Lesnar inside ‘Hell in a Cell’, Vince v Stephanie and last, but by no means least, the debut of one Montel Vontavious Porter; MVP.

And that brings us to No Mercy 2007, where the hyped match of the evening was John Cena defending his WWE Championship against Randy Orton, the man who had been a thorn in his side, the man who attacked John Cena’s dad on live TV, in a Last Man Standing Match.

Or so it was meant to be. A torn pectoral put paid to that and saw Cena stripped of the WWE Title and out for what many said would be up to a year. That left us with a dilemma, a dilemma that Vince McMahon was determined to sort out.

The disc opens with a recap of what happened to John Cena and the fact that Vince promised us there would be a new WWE Champion crowned at the event. Various superstars (HHH, Jeff Hardy, Umaga and, inexplicably, Shelton Benjamin, Carlito and Cody Rhodes) are presented as being potential champions by the end of the night during the video opening. From there, we cut to Mr. McMahon telling us that Cena will be out for between 6-12mths (which causes the fans to erupt into cheering) and as such, he is stripping Cena of the WWE Title (more cheers). He then, rather surprisingly, simply awards the WWE Title to Randy Orton. William Regal says that Orton needs to defend the title tonight, but he can choose to defend it against anyone he chooses. The fans in attendance want Y2J, much to the disgust of the boss. Orton waffles on about who he won’t be defending the belt against tonight (eliciting a strong pro-Cena chant).

The long diatribe from the champ brings out HHH; Hunter taking exception to Randy saying that no-one is worthy of challenging him for the belt. Long story short, Orton ends up defending the title against Triple H in an unexpected show-opener.

Trips and Orton have a sweet contest that ends up with HHH attaining his eleventh WWE/World Championship… but his night is far from over.

The second contest was not advertised, but was a great six-man tag match that had ebbing and flowing action from all six men. Everyone involved gets a chance to shine and came out looking good. I honestly wish WWE would do something special with Cade & Murdoch in the future.

Batista congratulates Triple H on his title win, but also uses a line Hunter used on him back when they fought over the World Title after Wrestlemania 21. Dave leaves and Vince appears stage left to tell Triple H that his scheduled match against Umaga is still on… and it’s also for the WWE Title.

The hometown hero is up next as Joey Styles and Tazz introduce CM Punk’s ECW Championship defence against Big Daddy V. A recap of the “Chase for the Title” elimination tournament that was the focal point of the ECW TV show for the preceding few weeks. Tommy Dreamer was meant to be the #1 contender, but it was the former Viscera (thanks to some string-pulling by Matt Striker and Armando) who ended up taking the slot.

CM Punk, in front of his home crowd, deserved a better opponent to showcase his talents, but the match wasn’t as bad as it could have been. The finish is an absolute joke, as is the treatment of CM Punk after the bell has rung.

Matt Hardy and MVP had been engulfed in one of the better feuds in Smackdown! history, and hardly any of it had been inside the ropes. Tonight was no different as they competed in a pizza eating contest that features the sight of Matt Hardy hurling onto MVP as Maria and Melina look on.

All the frivolities and silly shenanigans of the previous segment are soon forgotten when Umaga makes his entrance for his WWE Title shot.

The match itself is a typical Umaga match, with plenty of hard-hitting shots from both sides. The main story of the match was whether HHH could survive Umaga after having faced Randy Orton less than one hour before. The chapters listing gives this away, but even before then, the match listing on the back cover of the DVD just tells you straight. It simply says “WWE Championship Match – Triple H defeats Umaga”, so there was no doubt, even if you haven’t seen the show, of the outcome.

The Great Khali meditating is a sight to behold, as is the Punjabi Prison itself, and the giant predicts Batista’s demise at his hands inside the bamboo structure.

Up next is a match that had the potential to steal the show. It didn’t quite do that, but it was a very enjoyable contest between Finlay and Rey Mysterio. JBL is a revelation on commentary once again, and the sooner he gets back behind the desk, the better things will be. Finlay can work almost any style, and with Mysterio, he has someone he can bully and brutalise effectively. The match was great and the finish was a nice set-up for the following Cyber Sunday PPV.

Vince isn’t finished with Triple H just yet and confronts him in the trainer’s room where Hunter is being treated following his match with Umaga. The fans react positively to the news that Randy Orton has enforced his rematch clause for tonight and will be contested under Last Man Standing rules (as per the original plan for the No Mercy main event).

Three matches left on the card, a title on the line in each one. Up first is the Women’s Title (being defended at No Mercy for the first time in 5yrs) as Beth Phoenix (pre-Glamazon nickname until after the match) challenges Candice Michelle (w/ crap entrance music remix). The WWE Divas get a bad press with the internet fans, but it seems misguided most of the time, as the females usually have decent to good matches for the most part.

This match was a fantastic advert for the power of the challenger, the fighting spirit of the champion and was a good showing for the WWE Women’s Title. Beth Phoenix winning out was the best thing that happened to the Women’s title in a long time.

Batista v The Great Khali is not a match that people would admit to looking forward to, myself included, and as much as I have defended Khali, the prospect of them both waging war inside the second Punjabi Prison match (Undertaker and Big Show fought in the first one) wasn’t one I was eagerly anticipating.

I like the idea of the Punjabi Prison, especially the four doors on the inner cage, and it looks awesome, but Khali and Batista didn’t instil confidence in me that they could pull it off… but they did; the match was pretty decent, all things being told.

The video package beforehand, as so many WWE hype videos do, set things up perfectly and the sight of Khali and Big Dave being locked inside the structure was phenomenal. The main highlight of the contest was Batista leaping from the top of the inner cage to the top of the outer cage; a leap that was 20ft in the air and about eight feet across thin air to the second cage. The finish to this match had the crowd red-hot with excitement; how many people would have thought Khali and Batista would be able to do that?

JBL also deserves a medal for his commentary and ability at putting both men, and the structure itself, over with his choice of words and forceful delivery. Please, John, come back to the announcing table soon.

The show closes with the second Randy Orton/HHH contest of the night, this time with Hunter as the champ and Orton as his challenger, in a Last Man Standing contest that had a lot to live up to.

Live up to it they both did and then some. While not on a par with Umaga v John Cena’s LMS match from earlier in the year (and to be honest, there isn’t many matches that could), it was a belter of a contest between two well-matched wrestlers with a great history going back years.

The two wrestlers put forth an awesome effort and the rightful man won in the end.

The extras are a little more prevalent than the recent DVDs I’ve reviewed, and as such, add to the feature rather than take away from it.

The first extra is a nice little piece about Cena’s injury, surgery and prospects post-surgery. That’s followed by Todd Grisham interviewing a sweaty and breathless Batista about his victory against Khali, but at less than 20secs long, it’s a one-time viewing only section.

The last extra is where things get interesting, as it’s from the next night’s RAW where Vince orders everyone to come to the ring, shake Orton’s hand and congratulate the new WWE Champion on his (eventual) title win the previous night. Things don’t go to plan though, as HBK decides to make his return and let Orton know how he feels about the situation by planting his right foot onto Randy’s chin.

A really, really good show that features a plethora of good-to-great matches. The MVP/Matt Hardy feud was carried forward, a new WWE Women’s Champion was crowned, Batista and Khali shocked the world by putting on a good contest and the six-man bonus match was a nice addition.

All of that played second-fiddle to the WWE Title storyline, which, while not on a par with the Deadly Games storyline at the 1998 Survivor Series, was played out very well. Triple H came across as the strong-willed babyface, Orton came out of the event as the champion and Vince played the puppet-master to perfection.

Considering this show was put together with very little notice after Cena’s injury, it was a sterling effort by all concerned and was another great 2007 WWE PPV.