With only one non-stipulation match on the card, No Mercy 2008 had a lot on the line for a lot of people. The opening video package does a perfect job of showcasing the main feuds and storylines coming into the show… all soundtracked by Metallica. 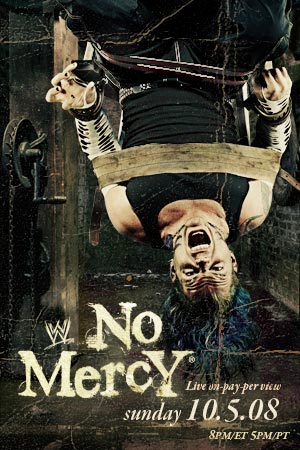 When the show starts proper, the first thing that hits you is the set; it’s huge and has six massive video walls (three either side of the Titantron). All three brands are featured, meaning all three announcing teams are also on show (although, Matt Striker wasn’t at the ECW table at this point in time).

No Mercy, where the seeds of “TLC” were sown in the debut of the Tag-Team Ladder Match in 1999, was a very good pay-per-view, with only one of the matches being anything less than good.

Matt Hardy v Mark Henry was a good choice of opener as the two men always seem to have good chemistry when they step into the ring together, with this one being no exception. The ECW Championship isn’t even close to being the most important title in the company, but both MHs made you believe that it was the most important title to them when the wore it with pride during their respective reigns.

A lot of smarks give Mark Henry a hard time, but I’ve enjoyed most of his work since he returned with his current persona, both in the ring and with his promos. He is, regardless of what you think of him, a very believable heel with a legitimate background as “The World’s Strongest Man”. Sure, his offence is basic, but that’s what power-wrestlers are supposed to be.

Beth Phoenix is a fantastic wrestler, regardless of gender, who, like Mark Henry, has a believable gimmick… and also the added bonus of Santino Marella in her corner. Candice Michelle, who’s music still sucks, was getting better before her injury, but since she returned, she has been really poor in the ring, so there was little hope for the Women’s Title Match to be anything other than a toilet break.

Unfortunately, it lives up to the poor expectations (with exception of the well worked finish) as Candice blows spots and mis-times move after move. It’s not as bad when Beth is on the offence, but overall, this is one match you will watch once and then skip any time you re-watch the DVD.

The next match had the potential to be a must-see due to the stipulation; if Rey loses, he must unmask.

Now, a lot of you may have seen Rey Mysterio unmasked during the dying days of WCW, but the majority of the current WWE fanbase wouldn’t have been watching back then and a good portion of the fans weren’t watching WCW regardless. Because of that, and the fact Rey hasn’t been seen without the mask for over seven years, the stipulation was a big deal.

The angle with Kane coming in was confusing and this match could have done with an added rule of making Kane re-mask if he lost. Unfortunately, with that not happening AND the match taking place outside on of the “Big Four” PPV Events (WWE wouldn’t unmask Rey on a “B” show… it’s too important for that), there was never going to be any result other than a Rey victory.

That’s not to say the match is poor, because it’s not. Both men give us a really good “Big Man v Little Man” bout with some hard hitting action, but the obviousness of the winner AND the manner in which it is achieved is cheap and leaves a nasty taste in the mouth (even if it brutally brilliant in execution).

A nice little backstage skit with Big Show and MVP leads to an unexpected in-ring appearance from the former United States Champion. Montel, you see, is upset that he isn’t booked on the PPV, so, after being dissed at the GM’s door, MVP makes his way outside to speak his mind, only to be interrupted by a few mystery guests. The end of the segment really gets the crowd going, but, to me, it came off all wrong as the faces came across as heels and the whole thing didn’t make much sense after a great first three-quarters.

Of all the matches on the card (outside of Beth/Candice), the bout between JBL and Batista was the one I was looking forward to the least. It also seems that WWE themselves knew that a lot of fans would feel the same way, so they essentially booked a 5min squash to put over “The Animal”. This was a wise decision.

The last three matches on the card are, in order, great, fantastic and brutally awesome. My good mate, Jimmy Redman, was nearly tearing her hair out due to the amount of video replays Big Show’s knock-out punch received on Smackdown, but the initial angle (as obvious as it was at Unforgiven) was well played out and WWE deserve credit for making Show a credible threat to Undertaker, especially as they have had feuds in the past where Undertaker dominated.

Vickie Guerrero also deserves a ton of credit for her efforts in the role of General Manager and the general believability of her reactions when faced with a riled-up Undertaker. The hype-video shows this to great effect as “The Dead Man” destroys Chavo in her office, then appears, in the ring, behind Vickie and drops her with a Tombstone.

Both men play to their strengths and beat the crap out of each other in a very stiff battle of the giants. The fans are into it from bell-to-bell and the result, unlike in the earlier Rey/Kane match, isn’t a formality. They also pull out some new spots (including a frankly awesome chokeslam-into-a-DDT counter on the part of Undertaker). The finish is as dominant a conclusion as you’re ever likely to see.

Is there a more over wrestler on the WWE roster than Jeff Hardy? The man, occasional blip aside, has had a phenomenal run in the company since his return a few years ago. Add into that, he and Triple H having great chemistry AND a storyline past going back seven years to Jeff’s first Intercontinental Title win, and you have a recipe for a potential show-stealer of a contest.

The one thing that WWE should have done is focus more on Hardy’s ascension up the WWE ladder. Jeff started with WWE as a jobber before moving on to the “featured jobber” role made famous by guys like “Iron Mike” Sharpe and Barry Horowitz. He then progressed up the tag-team ladder, became a superstar, winning secondary singles titles along the way and, eventually, reached the plateau of the main-event.

He is the only wrestler to ever go from no-name jobber to legit main-event superstar and eventual WWE Champion. The company should have held off until Wrestlemania to give him his big win and build it up with the real-life story of how Hardy climbed his way to the top. If nothing else, it is the most inspirational story the company has probably ever had.

Anyway, I apologise for digressing.

The match between Jeff and Triple H is a good one, but it is a disappointment when compared to their previous encounters (specifically the Armageddon 2007 match and the closing moments of the Elimination Chamber from No Way Out 2008). I will say this though; the finish had me on the edge of my seat and catching my breath when the referee called for the bell.

Closing the show, Jericho and HBK let it all hang out and pulled out all the stops to give the fans a ladder match to be proud of. Michaels was, for all intents and purposes, the father of the ladder match. Jericho, over the years, made the match his own, so both men had legit claims to being the master of the stipulation… and it was this that was the basis for their latest encounter.  After the lacklustre “Non-Sanctioned” match the two had at Unforgiven, something special was needed to bring the feud back on track.

To say this was match of the night is a gross understatement. In fact, it was a legitimate contender for “Match of the Year” honours. Hard hitting (Jericho loses a tooth after being smacked with the ladder), full of exciting exchanges and a red-hot crowd, this is one of those matches you can watch over and over again and never get tired of it.

Add to that a unique finish (the eagle-eyed among you will spot the one major flaw with it) and you have a brilliant end to a great show.

Of the two extras on the disc, the second is a bit of fluff that will be watched once and never chosen again. The first extra, however is nothing of the sort.

The main-event from Smackdown two days prior to this PPV, the three-way between the Brands’ respective champions, is a really good match that has plenty of action and plenty of near-falls for all three men.

When it comes to extras, I’m a sucker for bonus matches, and this was one of the better ones.

No Mercy was a packed card and, for the most part, was an enjoyable show.

The matches that deserved time to tell a story were given that time (the three title matches) and the bouts that needed to be kept short (Women’s title and JBL/Batista) were kept short.

Kane v Rey was slightly ruined due to the misguided (at this time, anyway) stipulation and the end of the MVP skit were the major disappointments (the Women’s match was as bad as I expected, so that wasn’t really a let-down) for the show, but the Kane/Rey match itself was good and the MVP promo was very good until the shaky end.

All in all, this is worthy of buying for the WWE and World title matches alone. The majority of the rest is just a great bonus.