WWE No Mercy 2006 on paper looked to be an average show ahead of time, but actually turned out to be one of the better pay-per-views of the year due to several strong matches. 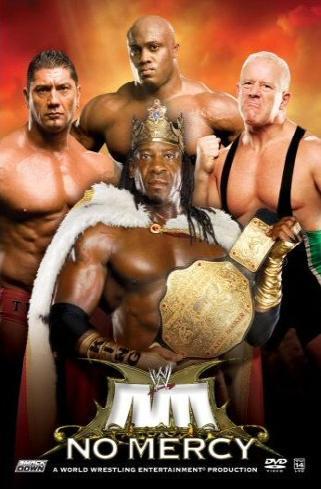 Disc 1 Chapters: 15 chapters. These are entitled:

The first match on the show was a very good cruiserweight title match, pitting Matt Hardy against the champion Gregory Helms in a non-title match.

Match number two saw Paul London & Brian Kendrick successfully defend their Tag Team titles against K.C. James & Idol Stevens in a shockingly good match. James and Stevens are green but London and Kendrick helped to carry them and they really looked impressive here. There were some comedy spots on the show.

Teddy Long called Miz out to the ring for a 26th birthday present for him. He brought out Layla for him, and she blindfolded Miz and started giving him a lapdance. Then Big Dick Johnson came out and did his stripper dance, revolting everyone. Miz didn’t know it was Johnson, thought it was Layla and well…. I’ll leave the rest to your imagination.

MVP debuted on this show, and in very underwhelming fashion. He defeated jobber Marty Garner in a quick squash. This wasn’t very good, as people were expecting his mystery opponent to be someone more significant than an unknown jobber, especially on PPV.

Mr Kennedy defeated the Undertaker via D.Q. in the next match. This wasn’t very good and kind of long and boring. Kennedy won via D.Q. when Taker used his title belt on him. Afterwards Taker gave Kennedy and the referee tombstone piledrivers.

Next match saw Rey Mysterio defeat Chavo Guerrero in an entertaining falls count anywhere match. Many had expected Rey to lose here due to his impending knee surgery, but it didn’t happen. They brawled into the crowd and it was quite heated.

The penultimate match of the night was a surprise affair. Throughout the show, William Regal had been shown backstage in a series of skits. Regal had been told by King Booker to find Finlay and ensure that Finlay was Booker’s ally in the main event. Instead he bumped into Vito, who caused Regal to get covered in food and end up having a shower. Vito insulted the size of his manhood, and Regal ran into the hallway basically naked. On the actual pay-per-view you briefly saw everything, but here on the DVD, they’ve edited out his brief exposure and also blurred the camera shots of his bare backside as he ran down the hallway. Anyway, as punishment Long ordered him to face a surprise opponent in the ring – the returning Chris Benoit. Benoit defeated Regal in easily the match of the night. This was a great technical match and very brutal. Benoit made him submit in the crossface for the win.

The main event was enjoyable too, as King Booker retained his world title in a four way match over Batista, Finlay and Bobby Lashley. Booker ended up pinning Finlay for the win, after Lashley took out Batista with a spear.

– Five DVD extras, all around 1 minute in length.

The extras are worthless, as usual, but I’d still give this DVD a thumbs up and my recommendation. It is a good pay-per-view with some very good wrestling matches.