THQ’s WWE games could be compared to the career of one Jake “The Snake” Roberts.  They both have their loyal fans, and they both have people who hate them.  Roberts and THQ have had their finer moments (No Mercy for N64) and their low points (Smackdown! Just Bring It).  If this particular game could be compared to a moment in Jake’s career, it would be from the Heroes Of Wrestling PPV, in which Roberts appeared drunk, threatened to drop his pants from around his gut and put his snake Damien between his legs.  Yes folks, Road To Wrestlemania is that bad. When I bought my Gameboy Advance, this game was part of a package.  I wasn’t complaining at all, as I had enjoyed Wrestlemania 2000 for the Gameboy Colour.  Surely all THQ had to do was improve a few things, touch up the graphics and we have a rival to Fire Pro.  So what makes this game so bad? 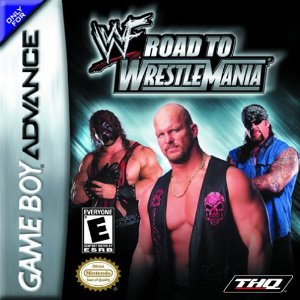 While not being anything out of this world, the graphics are above average for a GBA game.  All the proper logos and arenas are in the game, and look fairly good.  However, the wrestlers themselves look horrible.  Tazz looks like a fish, Edge looks sleazy (Or should that be Sleazier?) and for some reason, Michael Jackson’s face is in the game under the false name of Eddie Guerrero.  The real saving point of the graphics comes from the entrances.  As your WWE Superstar walks to the ring, their Titantron plays up in the background, and I must say they look rather good for a GBA game.  The graphics of Road To Wrestlemania might not be it’s main selling point, but it doesn’t ruin the game. 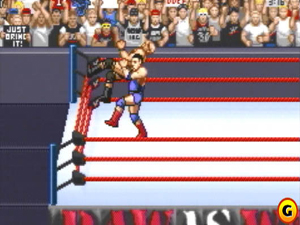 This game may suck, but it has absolutely great sound.  It seems to be the only area THQ cared about.  Each Superstar’s real life theme is perfectly reproduced in the game.  There’s even speech in it, which is rather impressive in a GBA game.  It seems as if THQ spent most of their time fiddling with the sound and graphics of this title, rather than playing about with the in ring action.

Urgh.  Someone sit down the guys who made this game and show them a tape of two people wrestling, because judging by this effort, they’ve never seen a match before in their lives.  Each wrestler has a grand total of 3 standing moves.  Who made this game, Kevin Nash?  Because of this, the move sets have been butchered.  In the game, Tazz’s arsenal consists of a kick, a scoop slam and a piledriver.  The man has been called “The Human Suplex Machine”, so why not give him a few suplexes?  And the worst part is, he doesn’t even have a Tazzmission.  Tazz’s suplex is a Northern Lights Suplex.  Chris Benoit, a man who has mastered hundreds of holds, slams and submission moves is reduced to being a Hogan-style kick kick punch punch worker.  And the Bio-Rhythm metre, the worst idea in a wrestling game EVER, is still being used!  Wrestling matches aren’t decided randomly, yet to do your finisher you have to wait until your metre is full.  And there’s no way to boost it yourself, you’re just as likely to have a finisher ready if you stand still than if you pull every move out of your arsenal; All 5 moves.

As well as your regular one on one and tag team matches, you can have steel cage and hardcore matches…And that’s it.  Hardcore matches consist of hitting your opponent with a steel chair until you can do your finisher, then win the match.  But just in case that sounds too wild for you, the weapons don’t do any long lasting damage to your opponent.  And as for cage matches, there’s no interaction with the cage itself.  The only difference is that when you whip your opponent into the ropes, he doesn’t come back.  With such diverse gameplay, how can you say no to this game?

A Create a Wrestler mode in a WWE Gameboy game?  Maybe it’s a hidden mode in this game that I’ve yet to find.  Along with the real game that you actually want to play. 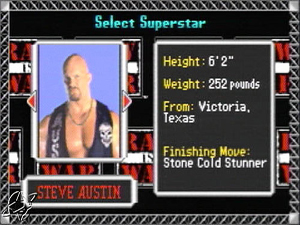 OK, so there are your normal WWE superstars in this game.  All of the main eventers, several upper midcarders and a few more can be found in the game.  But why bother when every wrestler has the same moves, apart from one finisher?  It makes no difference if you’re Rock or Christian, your match will take the same route: Punch.  Piledriver.  Scoop Slam.  Stomp.  Punch.  Wait for finisher.  Hit it.  Win match.  Repeat until you realise Fire Pro is a better game.

There is nothing to keep you coming back.  No CAW, no hidden secrets, the same (Terrible) career mode for every character.  After you’ve played it for 5 minutes, you’ve discovered all there is to the game.

Apart from a pretty good music score and bearable graphics, this game is utterly terrible.  It’s a waste of everyone’s time, from the programmers to the player.  My first bad game had to come along sooner or later.  Thanks to THQ, it turns out it was sooner.  Fire Pro is infinitely better in all but one departments and costs less to boot.  A huge recommendation to avoid.  And if you see anyone playing this game, throw a sharp object at them.  They deserve it.