It was only a year ago that a wave of anticlimax swept the world of wrestling video games.  For all the hype, for all the expectations, the third instalment of Yukes’ Smackdown! series was a big letdown.  Poor career mode, unrealistic gameplay and graphics which looked more at home on a PSOne hurt the game.  But that was then, this is 2002.  It’s a new game, with the usual promises.  But for once, will a Smackdown! game actually deliver?  THQ are telling you to Shut Your Mouth, so you’d better listen to them.  Let’s see how WWE Smackdown- Shut Your Mouth plays- 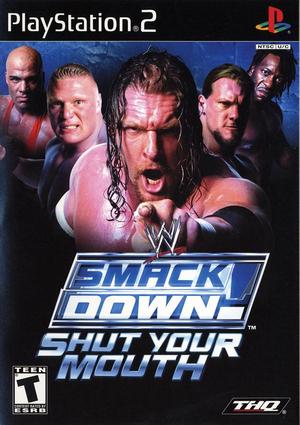 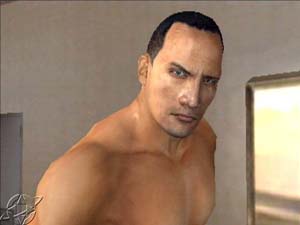 Unlike Just Bring It, the fourth Smackdown! game’s graphics just scream “Look at me, I’m Next Generation!”.  The character models are crisper, the animations are smoother, the arenas and crowd are as good as any I’ve ever seen on any system.  I love the character specific animations: RVD now moves like RVD, and Brock Lesnar walks about like only he can.  A superb effort by the developers.  However, it’s not all gravy, unlike a generic R ‘n’ B artist would have you believe.  During career mode, when you speak to someone, their lips bounce around wildly, totally out of sync with the words on screen.  All THQ need to do is add bad voice overs to the over the top mouth movements, and they have a great looking 1970 martial arts film.  However, this is a wrestling game, and it doesn’t quite work.  While the graphics aren’t perfect, they’re a lot nicer to look at than, say, SD! JBI.  An improvement in this area all right, this game looks good enough to eat.  If Hulk Hogan tasted of strawberry.

Credit must be given to the game makers, almost all of the themes in this game are true to their real life counterparts.  There’s a lot of licensed music in this game, much like WWE currently has.  Everything from Edge’s Rob Zombie theme, to Real American is in this game.  Bad news for people who like Matt Hardy and Stacy Keibler’s themes, they’ve been left out.  Also, bad news for Jeff Hardy fans.  Not only do you need to wash, but his music isn’t in the game either.  Swiftly moving on…I remember when this game was first announced, THQ promised that there would be “real life crowd chants”.  I think it’s an important feature to have in a wrestling game, but for some reason, the crowd just sticks to the usual jeers and cheers.  Hardly something you’d expect on a PS2 game.  Now onto the moment you’ve all been dreading- THE COMMENTARY!!  If you’re still reading, you’re very brave.  But I do have to tell you that the PBP is better than Michael Cole and Tazz in JBI.  JR and The King are nowhere near perfect though, and you’re bound to get at least one inappropriate comment in every match.  Not the worst audio ever in a wrestling game, but there is an awful lot that can be improved upon. 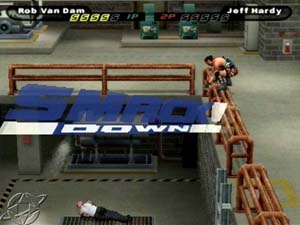 The Smackdown! engine has been pushed to the very, very edge with this game.  Despite being very much an arcade game, Smackdown! SYM is extremely realistic in some departments.  The selling of moves is no longer such a big problem, you can always expect your opponent to stay down for quite a bit after they’ve taken a whoopin’.  Anyone who has any interest in wrestling games will know all about the SD! Control system.  It’s a very basic “Direction and circle” style scheme that doesn’t require a lot of skill to play.  And as long as Yukes stick to the Smackdown! engine, we can expect more of the same in the next PS2 WWE game.  I’m not a big fan of this control system, it’s very beginner friendly, and experienced players will not always have a large advantage over their human opponent.  The game is very much playable though, with help from the new reversal system.  Unlike the old SD! Game, where a simple tap of the Square button will lead to what seems like a never ending chain of reversals, you need a bit more luck (or skill, as some would have you believe) to reverse moves in this game.  Yes, you have to guess the direction that the computer/other player went in to execute the move.  This means you have a one in four chance of reversing the move.  I really like this new system.  In real wrestling, the superstars take turns in having spells where they dominate.  No other wrestling game has captured this feature until now.  Because it’s harder to reverse moves, you’ll often find yourself in a situation where you’re under the cosh for ages.  I’m a huge fan of the new way to reverse moves, and I hope it stays in future games.  Other new parts of the game include the ability to block finishing moves, as well as the chance to do your opponents’ finisher on him: the ultimate embarrassment!  This is the best use of the Smackdown! engine to date.  Let’s hope Yukes realise that it’s time to use a new engine for their next WWE game.

There aren’t a lot more game modes than there was in SD!3.  While the Hell In A Cell mode now contains a full size cell, and there’s a new option on how to play 6 man tag matches, you’d really expect something a bit more substantial.  However, the real good stuff is in the all new career mode.  It’s a great medium between SD!2 and SD!3.  As you’d probably expect, you get involved in the roster split, you try to win the titles, you gain friends/enemies along the way.  There’s nothing that’s all new here, it’s just been made really well.  The 2 years of career mode are really enjoyable, and there’s an awful lot to unlock in this mode, in terms of new outfits and moves for CAWs.  It’s probably the best Career mode I’ve played in a wrestling game, and it’s what saves SD! SYM from scoring very low in this category.

If you were expecting the CAW password system or Create A Move to be in, forget it.  What you have is a CAW mode, which seems very complex at first, but you’ll get used to it quite quickly.  I don’t think it’s a lot better than JBI’s Create A Wrestler mode, but there are some improvements, including the ability to edit your wrestler’s face in great detail.  To be honest, I’ve not used the CAW mode a lot, because of the size of the main roster.  But from what I’ve seen so far, it looks to be pretty good. 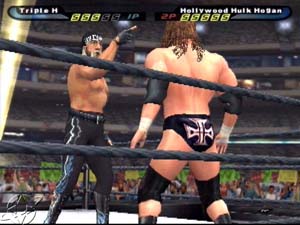 Hmmm.  While there are a lot of characters in the game, the roster is very out of date.  There’s no Rey Jnr, Bischoff, Batista, Steiner, Nowinski, Rosie and Jamal, as well as lots more.  Matt Hardy is still a face with his brother Jeff, Undertaker is still the champion and there’s no Velocity set.  Add to this the fact that Ric Flair and Vince McMahon are the feuding brand owners, instead of Bischoff and Stephanie, and it’s not an impressive list.  Granted, a lot of these guys joined WWE’s main roster not too long ago, but there are some names in the list that you’d definitely expect to see in SD!4.

Like all other Smackdown! games, you won’t be playing this game six months after you buy it.  The career mode is really good, but it’s not enough to keep you coming back week after week, month after month.  You’ll use the CAW mode too, but with a limited amount of space for wrestlers, you’ll eventually run out of guys to make.  Don’t get me wrong, it’s an enjoyable game in the short run, but by this time next year, it’ll be just another game gathering dust in your “Rejects” collection.

The best SD! Game to date, and a massive improvement over Just Bring It. However, Yukes will struggle to improve upon this game if they stick to the same Smackdown! engine. It’s a fantastic game to play with your pals after a night at the pub, and you’ll really enjoy the one player mode, but…It’s a Smackdown! game! They’re not allowed to be really, really good. One half of me loves this game, and makes me want to burn my Fire Pro collection. The other half of me realises it’s just the same game that came out 3 years ago, but with a few updated features. If you’re a WWE fan with a PS2, you should buy this game. If you’re a wrestling fan, Fire Pro will still remain the King Of Wrestling Games. If you don’t like wrestling at all…What are you doing at TWO?