Remember Hulk Hogan’s Rock ‘n’ Wrestling?  If you don’t, it was a cartoon in the eighties that featured the main stars of the then-WWF outside of the ring, having some wacky adventures.  The wrestlers used to drive around in big cars that were made to resemble the character’s gimmick (For instance, Roddy Piper drove a huge Bagpipe with wheels).  So who would have that that 20 years later, THQ would release a game that owes a lot to the Rock ‘N’ Wrestling concept of wrestlers in cars.  When Crush Hour was announced last year, everyone thought “THQ are trying to branch out the WWE franchise again, and just like WWE Betrayal, it’s gonna suck”.  So, is this car driving shoot ‘em up in lycra going to beat Twisted Metal Black?  Or are THQ going to face another humiliation like what happened with WWE Betrayal? 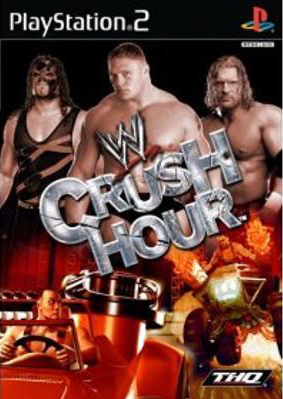 Without pushing the limits on the graphics front, THQ have done a fairly decent job with the visuals.  The game is a lot brighter than Twisted Metal, which is neither good nor bad, it’s just a different take on how the games looks.  The character models look utterly atrocious, but there are some plus points.  Each wrestler’s vehicle doesn’t look too bad, and the arenas are usually animated well enough so that you can see what is going on clearly 80% of the time.  There’s nothing outstanding about the graphics, but they do the job. 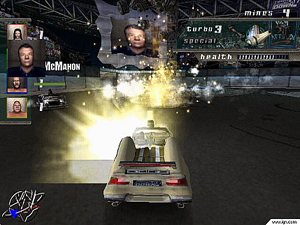 The in-game music is as generic as it gets, and will start to get on your nerves after a while.  JR’s commentary is useless, but thankfully infrequent.  In my opinion, they’d have been better off having no play by play, as this is a driving game, not a WWE show were analysis can help you understand a match better.  If you can’t see that being hit by a missile is bad without a crazy old man from Oklahoma tell you so, then you probably don’t get out much.  The only good point about the audio side of Crush Hour is the fact that authentic theme music is in the game, albeit in 30 second clips.  The sound is pretty poor overall then, and THQ should have done a better job of using wrestlers’ real music in the game, rather than use them in short bursts that most people won’t care about after a few games.

OK, so we’ve established that the game’s presentation isn’t quite top notch, but how does it play?  The answer is, surprisingly well.  Just like the Twisted Metal series, it’s kill-or-be-killed here, as you drive around WWE-themed arenas shooting as opponents.  It’s simplistic, but some of the best ever ideas in gaming history have been very basic.  The only downfall is the serious lack of weapons.  Seeing as how the whole game is based on shooting, you’d think that the creators would add more than just a measly few weapons, most of which are unlikely to do big damage or are difficult to connect with.  But the game mechanics are definitely playable, and easy to pick up and play. 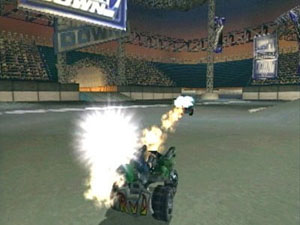 The game is lacking somewhat with features.  You’ve got your normal basic game modes with different arenas, a season mode, and that’s your lot.  There’s not much to do here expect exhibition mode, once you’ve been through season mode a few times.

CAW- N/A No create functions in Crush Hour.  Move along people, nothing to see here.

A great effort from THQ here.  Despite the fact that most games in this genre feature little more than 10 playable characters, Crush Hour can boast a whopping 30 wrestlers which you can control.  Everyone is in the game, from Chuck Palumbo, to Stephanie McMahon, to Hulk Hogan, and many, many more.  Different cars have different stats as well, so it does actually matter which character you pick here.  Kudos to THQ for including so many characters.

I almost feel sorry for giving Crush Hour a 1 for it’s replayability.  Then I remember that outside of the main part of the game, season mode, you only have exhibition games to play.  Yes, there’s one or two unlockable characters, but that’s not going to keep you playing for more than 3 days.  Crush Hour is a budget title, but surely there could have been something else to include in the game than just exhibition and season modes.

If Crush Hour was a normal game with a normal price tag, you’d have been looking at one of the lowest scores I’d ever given a game.  But it’s not.  Yes, WWE Crush Hour costs less than £20.  I suppose then that the low price tag is a fair excuse for the lack of lastability, and we do get a lot of different characters to play as for a £20 game, but it’s still not a “must buy” game.  At £20, you’re going to be hard pushed to find a better game first hand on the PS2.  But be warned, after a week or so, Crush Hour is so repetitive and devoid of any features that draw you back for more that you’ll wish you could jump into Hogan’s Hulkmobile and run over the CD a few times.