“Of all the crazy ideas you’ve had, this one ranks somewhere in the middle”.  As regular viewers of the Simpsons know, that’s something that Marge said to Homer when he had another wacky plan.  But it could also apply to EA’s wrestling games.  First, they took out the wrestling ring from WCW Backstage Assault.  Now they’ve decided to release a wrestling game without wrestlers.  I guess EA are big believers in “Less is more”. 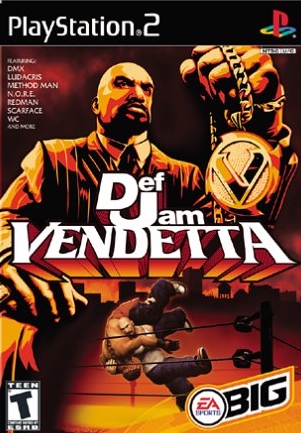 So instead of Hulk Hogan and Steve Austin, in Def Jam Vendetta, you’ll be wrestling as rappers such as Method Man, DMX and Ludacris.  But with the AKI engine on their side, EA might just be able to make something of this wrestling-rap amalgamation.  It’s an idea so crazy, it might just work.  Let’s see if it does. 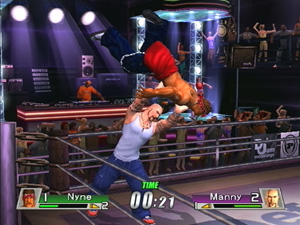 Visually, DJV is a very impressive game.  The wrestler models are uncharacteristically smooth for an AKI game, without overdoing the chunkiness.  While the graphics still look a bit like a cartoon, they’re still more realistic than Acclaim’s Legends Of Wrestling.  As for the arenas, they’re positively breathtaking.  There’s a lot of influence from NBA Street (Also made by EA Big) in the backgrounds, with ghetto-like background and fans cheering on the action.  As from the crowds, I can safely say that they’re the best ever featured in a wrestling game.  Each fan looks like they’ve been modelled individually, and the capacity Def Jam arena looks as true to life as anything I’ve seen in a wrestling game.  AKI have done a top job creating next generation quality graphics for a next generation quality control engine.

Let’s cut to the chase: I simply can’t stand rap music.  To me, it’s a bunch of people shouting to a beat, while trying to incorporate more swear words than their rivals.  So if you’re a fellow rap music hater, then you’ll be pleased to know that EA has included an Audio option which allows you to turn down  the music completely.  If you’re a fan of rap music, you’ll be happy to know that most rappers who you fight as in the game have some tracks playing in the background.  Away from the musical side of things, the in game Play By Play is pretty bog standard.  There’s no specific calls of names/moves, just general comments every 20 seconds like “Hurry up!” and “That was a big move!”.  It’s not frequent enough to annoy you, but there often enough so you know that there is PBP.  The crowd sounds are pretty drab too, with the usual cheering at big spots.  Occasionally though, the crowd will start a chant for some of the bigger name characters in the game, but it’s not something you’ll hear in every match.  Anyway, if you’re a fan of rap music, add 4 points to the score.  If you think rap is crap (R.I.P. Curt), take away 4 points. 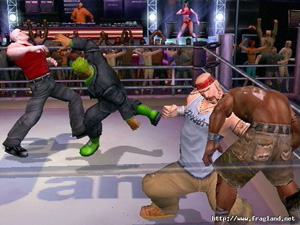 This is nearly as good as it gets.  I’m sure everyone knows about the AKI engine, with it’s soft and hard grapples, one strike button and momentum meter.  It still works as well as it did all these years ago with WCW Revenge, allowing you plenty of options with what moves to use, and a fair way to decide when you can use your finisher (Or “Blazin’ Move” in Def Jam lingo).  However, you can’t help but feel that the engine has been dumbed-down from No Mercy.  There are no more top rope, running or corner specials, just front and rear Blazin’ Moves.  You’re limited to only two corner moves per character.  There are no weapons to be taken from the crowd.  Gone is the ability to drag your opponent away from the ropes.  It’s a bit strange that EA took these features out, as they added to the game playing experience.  Due of these changes, pins are nigh-on impossible, with your opponent always managing to find their way into landing from your big finishing move beside the bottom rope.  This means that the only real chance you have of finishing a match is by KO-ing your opponent by using your finisher while their health is in “Danger” mode.  Very rarely does a wrestling match not end in pinfall or submission, but most Def Jam matches finish via a KO.  Anyway, minor faults aside, the AKI engine is still the industry leader for wrestling games.

Def Jam is lacking a bit on the extra goodies side.  You’re only allowed to fight in 5 kinds of match (Single, Tag, Handicap and 3 and 4 way), without gimmicks of any sort.  The Survival mode is a Gauntlet style mode where you take on opponent after opponent, but the lack of ability to save during this mode means that you’re going to need an empty night if you want to beat all 37 opponents.  However, the saving grace is the career mode.  Starting off as a bum at the bottom of the pile, you need to fight opponents in arenas all over the country to qualify for the annual Def Jam Tournament, win back your girlfriend and get your friend’s debt paid off.  While the career mode has a lot more background story to it than your usual wrestling game career mode, and allows you to build up your chosen character into an invincible fighting machine, it does tend to drag on a bit.  There’s a real lack of build in the game, as your opponents don’t get harder as the game progresses, even if your character gets better.  For example, your 3rd opponent is much harder than your 20th.  Aside from the fact that the career mode is the exact same for every character, it’s still good fun, and worth your while playing through it with all 4 main characters.  The final feature that Def Jam offers is the Pervert Mode.  Well, it’s not officially called that, but as you gain popularity in season mode, groupies will surround you.  For every notch on the bedpost, you unlock a new set of photo galleries for the models that the groupies are based on.  It’s tame stuff compared to BMX XXX (Seeing as how DJV’s age limit is rated 15+), and it might not keep you coming back to the game, but it’s a good feature…just make sure your mum doesn’t walk in on you.

Surprisingly, there’s no create-a-rapper mode.  AKI have never been big on creating wrestlers, but you would certainly expect some sort of editing mode on a wrestling game these days.

This is another grey area.  If you know who guys like Joe Budden and Keith Murray are, then you’ll be happy.  If the only rapper you know is Eminem (He’s not in the game, by the way), then you’ll not give a hoot who’s in the game.  Each character has a made up moveset, with a lot of influence coming from WWE, so it’s not fair to judge the game on how accurate each wrestler’s movelists are.  Again, add 4 points if you like rap, take away 4 if you hate it.

Def Jam won’t have you playing forever more.  Once you’ve done season mode four times (Shouldn’t take much more than a week), been every character, finished Survival mode (It’s not difficult, just long), then you’re done with the game from a one-player perspective.  If you get some friends round, then you’ll enjoy the multiplayer side of the game for a while longer.  But after a few months, you won’t touch Def Jam Vendetta again. 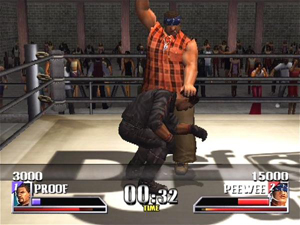 For a short term burst, Def Jam is a cracking title.  The rap influence doesn’t hurt the game too much, and you’ll take some time to master every character and mode.  But you’re not going to keeping playing DJV for weeks and weeks on end, due to the fact it doesn’t provide enough variation from the 5 match types (Two of which don’t even feature in Career Mode).  If you’ve never played an AKI game before, or if you’re a big fan of wrestling/rap/both, Def Jam would be a great buy.  But you really do have to wonder why EA Big went for a Def Jam franchise.  I don’t think that a hardcore rap fan would buy this game just because of the characters in it if they don’t like wrestling.  Maybe I’m biased, but as a wrestling fan, I would have preferred EA to pick up the rights to a US wrestling promotion outside of WWE (For example, NWA TNA or Ring Of Honour) and made a game from that.  If everyone in the world was a game, this would be John Cena.  It’s exterior is rap, but deep down, it’s crying out to be loved for it’s wrestling.

I would recommend you try Def Jam before you buy.  Rent or borrow it from a friend before you spend your money on it