Well, would you look at that.  A review of a Mixed Martial Arts game at Wrestling 101.  I’ve been playing UFC Throwdown for a week now, and it’s time to put my thoughts on it online.  If you’ve never heard of Ultimate Fighting Championship before, then I’ll try to sum it up.  Basically, it’s No Holds Barred fighting in an octagon.  Contrary to popular belief, the outcomes of UFC fights are not pre-determined.  To win a fight, you either beat your opponent down until he can’t get up or make him tap out to a submission move. 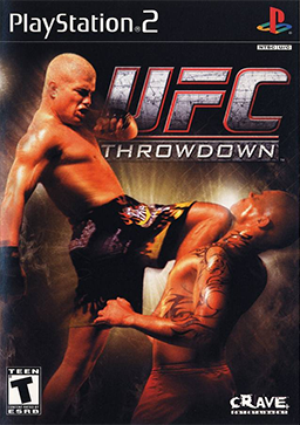 Ultimate Fighting Championship is the world leader in Mixed Martial Arts, and hold shows all over the world.  Crave, the official game developers for UFC, have released a few titles in the past, which have been a mixed bag, to say the least.  The UFC game for Dreamcast was loved by almost everyone.  The Playstation One version was terrible, and not a patch on the Dreamcast version.  Now, Anchor, the makers of the Dreamcast version, have signed with UFC’s rivals, PRIDE FC to make games exclusively for them (I’ll be review that when it comes out too).  So is this new UFC game a hit or a miss?  Time to find out… 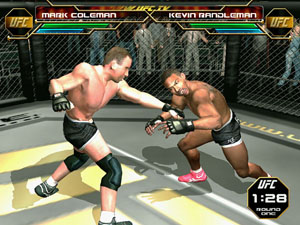 The visuals for the Dreamcast game were of the highest standard.  However, UFC: Throwdown doesn’t match them.  Despite being on the PS2, the graphics aren’t really what you’d expect from a title on that system.  Sure, the characters look OK, and you can tell the difference between Carlos Newton and Dan Severn, but there’s nothing in this game that would make you say “WOW!”.  The crowds and arenas are nicely modelled, and there’s nothing really, really bad about the graphics.  But for some reason, they don’t meet the standard of graphics you’d expect on a PS2.

Despite not having any licensed music or sound samples from the fighters, the sound is really quite good.  There’s some excellent samples provided by Bruce Buffer and “Big” Jon McCarthy in the lead up to the match, and the crowd “ooh”s and “aah”s with every blow landed.  There’s also generic screaming sounds added, to make pummelling your foe that little bit more fun.  While the game doesn’t include real life theme songs (Limp Bizkit’s “Break Stuff” for Tito Ortiz is sadly missing), it does feature the official UFC song, which is used constantly.  There’s also the average soft rock music for the menus.  Overall, the audio side of the game is impressive, especially the introductions leading up to the fight. 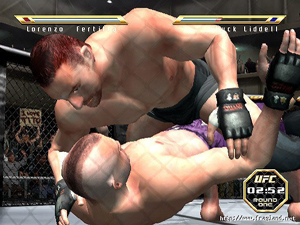 This game captures exactly what it’s like to be in a real shootfight.  Some matches can last for the maximum 15 minutes, while others last little more than 5 seconds.  It might annoy you when your character taps out before the fans can get started munching on their virtual popcorn, but it’s realistic.  Depending on what character you choose, you’ll have to fight every match in a different way.  If you’re fighting a heavy puncher, you can’t get close to him.  If you’re a submission expert, you need to find ways to get your opponent into various holds. UFC Throwdown isn’t a game you can pick up and play, you have to work at being good at it.  It can be extremely challenging at times, but very rewarding too.  The 2 Player mode is excellent, and when you’re fighting someone who knows how to play this game, be prepared for some major highs and lows.  You’ll not win every match, no matter how good you are at this game.  Even if you’re a second out in trying to counter, your character will be stuck in a submission move with no way to go, while you scream at your TV, urging your character not to tap out.  Once you get a winning streak going, it’s hard not to get to love this game.  A big thumbs up in the gameplay department.

UFC Throwdown isn’t exactly bulging with different modes.  Unlike a wrestling game when you can have a tag team or battle royal match, every bout in UFC only involves 2 people.  There are, however, different ways to play.  As well as your standard exhibition match, you can have 8 man tournaments for a title.  You can also play “Arcade mode”, which is a kind of gauntlet mode, where you have to beat 10 opponents one after another.  In training, you can learn all your character’s moves without fear of losing the match.  Finally, there’s career mode.  You create your own fighter, build up his stats, then take him into the big leagues of Ultimate Fighting Championship.  This will keep you going for a while, as you have to face Gran Tourismo style challenges after some fights in order to beef up your guy.  Some of these tasks are nigh on impossible, and will take a while to complete.  The game suffers from UFC’s real life rules of strictly one on one matches, but there’s plenty of modes here to keep you entertained.

The worst CAW I’ve ever used.  It really is.  You only get about 20 different character models to choose from, and the only things you can edit are the height and weight.  Because of this restriction, you can’t create anyone you’d recognise.  If you bought this game thinking you could make the Gracies, Ken Shamrock, Tank Abbott, and many more, then you’re in for a shock.  Add to this the fact that you can only choose which discipline to fight in, and you can’t create your own movelists, and you’re left with a CAW mode with will not be used often.

There’s plenty of people to choose from, each one of them a real life UFC fighter.  From your heavyweights like Mark Kerr and Dan Severn, to the lightweights such as Tito Ortiz and Frank Shamrock, you’ll not run out of people to go for a long time.  There’s hidden characters to unlock as well, so you’ll spend a long time to master everyone in the game.

There’s not a lot here to keep you coming back.  Once you’ve unlocked everyone in the game and completed career mode, which won’t take long, all that’s left to do is unlock the full movesets for all the characters.  This should add a bit of replayability to the game, but the fact is you won’t even bother going some characters.  By the time PRIDE FC is out, you’ll be long finished with this game.

I’m not overly impressed with UFC Throwdown.  There are some really nice touches to the game, but it really does lack depth.  The career mode isn’t great, you’ll have finished the game within a month or two and there’s not a huge amount of things to do after that except fighting exhibition matches over and over.  If PRIDE FC is as good as everyone seems to think it will be, then this is a good way to prepare yourself for it.  The question you have to ask is if it’s worth your money ordering a starter for the same price as the main course.  Unless you’re a UFC die hard fan, or you’re going to be playing the 2 Player mode a lot, it would be worth keeping your money until Christmas, when PRIDE FC is out.