If you read my review of UFC Throwdown, you’ll remember that I said that you should wait until the release of Pride FC before making a purchase of a Mixed Martial Arts game.  Now, both games are out in the UK, so it’s time to make a decision.  But first, a brief history lesson.  The first batch of UFC games came out on the PSOne and the Dreamcast, and were made by Crave and Anchor, respectively.  The PSOne game was pretty poor, but the Dreamcast version of UFC was one of the best games on the system.  So when Crave took over the role of making all of the UFC games, it wasn’t long before Anchor moved to start producing games for UFC’s real life rival promotion, Pride FC.  Last year, I gave UFC Throwdown for PS2 6/10.  Will Anchor be able to beat Crave at making MMA games on two consecutive occasions? 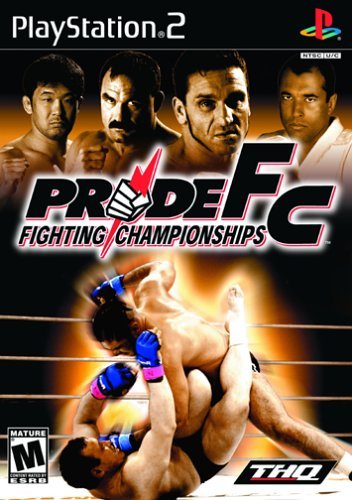 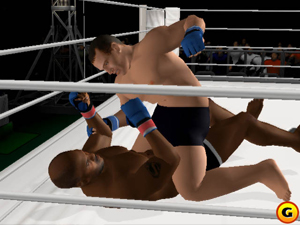 It’s certainly a lot prettier than UFC Throwdown.  The characters look more realistic, the arenas are more visible due to the fact that there’s not an octagon cage in the way and all the fancy features during entrances like smoke and pyro have been made to look exceptional.  However, while the fighter models are a big improvement over UFC Throwdown, there’s still a lot of room left for improvement.  Everyone still walks around with their chest pushed out, and some of the more muscular guys have shoulders that look more like footballs.  Anyway, the visuals are great in most parts, and certainly aren’t the worst part of the game.

Pride FC fares better here than UFC Throwdown, for the simple reason that all of the real songs used by Pride fighters have been included in the game.  The introductions are lacking somewhat though, even with the authentic Japanese and American voices used.  Like many titles, the in-game music is woeful, and will annoy you after a while.  The crowd sounds are just as good as Crave’s attempt at recreating the world of MMA, with the audience’s noises sounding perfect.  I think that commentary, no matter how basic, would have been a great addition to the game, as the real life promotion features some great play by play, and would help some of the gamers who know little or nothing about the real life Pride FC (and let’s face it, there’s going to be a lot).  Anyway, what’s in the game is good enough, and the authentic themes really help things on the audio side. 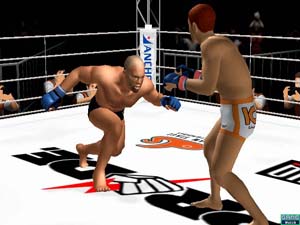 If you’ve seen UFC Throwdown in action, then you’re going to be surprised with anything here.  Unfortunately, both games play EXACTLY the same.  Despite being made by two different developers, UFC and Pride have identical engines, which means that experts in one game are going to be just as good in the other.  It also means that you’re going to breeze through the game in double quick time.  If you’ve never seen a MMA game before, then Pride plays quite well.  Each face button controls a limb, and you can combine strikes with takedowns to get your opponent to tap out, or beat them unconscious for the KO.  One big flaw that was apparent in UFC too was the fact that once a submission is put on, no matter how early in the match, it’s game over.  If you’ve ever seen a Mixed Martial Arts match, you’ll know that fighters can have armbars and choke outs locked on for over 2 minutes without a tap out.  What it means is that after a few days of playing the game, all your going to be doing is putting on submissions and winning matches in 10 seconds or less.  It’s a big draw back, and I really wish that Anchor could have added something to the UFC engine, rather than used it in it’s entirety.

The lack of things to do in Pride FC is just jaw dropping.  First of all, there’s no career mode.  Punch Out on the NES about 15 years ago had a career mode.  For a game that you’re paying £40 for not to have a mode of some sort that sees your characters progress from nobody to a real contender is absurd.  So, what are you left with?  Exhibition matches and Grand Prix mode.  Exhibition matches are hindered by the rules of real life Pride, where every match is a regular one on one.  With a wrestling game, after you’re through with the career mode, you’re still left with loads of different match options.  There’s nothing extra to be found in Pride FC.  As for Grand Prix mode, it’s the same that was in UFC Throwdown, where you pick 16 fighters and have a tournament.  And that’s your lot.  UFC had a career mode, exhibition mode, survival and tournaments.  Why is Pride taking a step back instead of a step forward?

While being miles behind a wrestling game’s Create mode, it’s still slightly better than UFC.  Again, there’s a major lack of looks for your created guy, but at least you can pick his own moveset.  But once you’ve made a guy who looks nothing like any real MMA fighter, what do you do with him?  Tournaments and exhibition modes, over and over and over.  Thrilling.

No Bob Sapp.  Despite being the biggest thing in MMA today, The Beast is nowhere to be found in Pride FC.  However, there are a lot of familiar faces for fans of wrestling and MMA alike.  Guys like Ken Shamrock will be known by everyone, and a lot of people will be happy to see Royce and Renzo Gracie included.  The roster is probably too big for a game without a career mode, but there’s enough characters included so that the game will last a big longer than it would have otherwise.

There’s very little to keep you coming back for more.  Due to the fact that the game has no career mode, you’ll soon tire of winning the Grand Prix mode time and time again, so the only thing left to do is play lots of exhibition matches.  And this isn’t really a game you can play with your friends in short bursts.  The reversal system is quite complicated, and unless you’re a real pro at this game, you’ll lose most matches to human opponents within 20 seconds.  Unfortunately, Pride FC has nothing to draw you back for one more game.

Yes, the same score as UFC Throwdown.  It just doesn’t offer anything new from Crave’s game, and a better CAW mode means nothing without a career mode.  This is a game you can rent for 2 days, and be bored of it before it’s due back.  The only way I can recommend this to you is if you’ve never played a MMA game before, but you love Pride FC.  And maybe if you’re rich, and can afford to waste £40.  If you own UFC Throwdown, don’t even think of touching this game, as you’ll have already mastered the game engine and on your first game you’ll probably zip through Grand Prix mode and defeat every challenger in exhibition mode.  Overall then, it’s unlikely that you’ll ever need to play Pride FC, as you can find the same game with a career mode and an octagon cage probably for a lower price.  It’s a shame that Anchor didn’t try to take Pride FC to the next level, instead of settle for mediocrity.