Doctor Who S13E04 Review: Village of Angels – More menacing than ever!

In the tenth episode of season 3 of Doctor Who, aptly called “Blink,” broadcast on June 9, 2007, David Tennant’s Tenth Doctor described Weeping Angels as “the only psychopaths in the universe to kill you nicely.” These ancient alien beings are quite possibly the deadliest, most powerful, and malevolent life-forms the Doctor has ever encountered, as they send their victims into the past to a point before their birth and feed off the potential energy of the years which that victim would have lived in the present—a genuinely psychopathic way to kill, without actually having to commit the deed.

Given that Weeping Angels essentially feed on time paradoxes, it’s not difficult to imagine the chaos one such Angel could wreck if he gained control of the TARDIS. And that’s precisely what happened at the ending of “Once, Upon Time” – an Angel took control of the TARDIS. However, unlike last week’s overly complicated and difficult to grasp episode, showrunner Chris Chibnall and his co-writer for the week, Maxine Alderton, managed to serve up the most thrilling episode of the season so far – packed with compelling storytelling and topped off with a jaw-dropping conclusion.

“Village of Angels” opens up with a hand pressing the “start” button on the old tape recorder from the ’60s. The one with 5.75-inch spools and a magic eye-type indicator on the left for setting the recording level. The pencil leaves a trace on the notepad while the writer examiner his glasses. The older gentleman, later revealed as Professor Eustatius Jericho, asks his “test” subject to tell him the current date, November 21, followed by the year – 1967 – to which the machine’s needles curiously rock back forth. The subject is clearly lying.

Outside of the dimly lit basement, and out in the rainy night, a silhouette of an elderly gentleman armed with an electrical lamp is calling out to Peggy, a ridiculously mischievous child apparently, that wandered into the night. Back in the basement, the Professor asks his examinee, Claire, a series of questions, revealing to the viewership that she was the very same Claire attacked by the Weeping Angel and sent back in time to 1967, eighteen years before she was born. Suddenly, Claire has a premonition, warning the good Professor that the end begins now and that there’s no more time. Cue the intro. 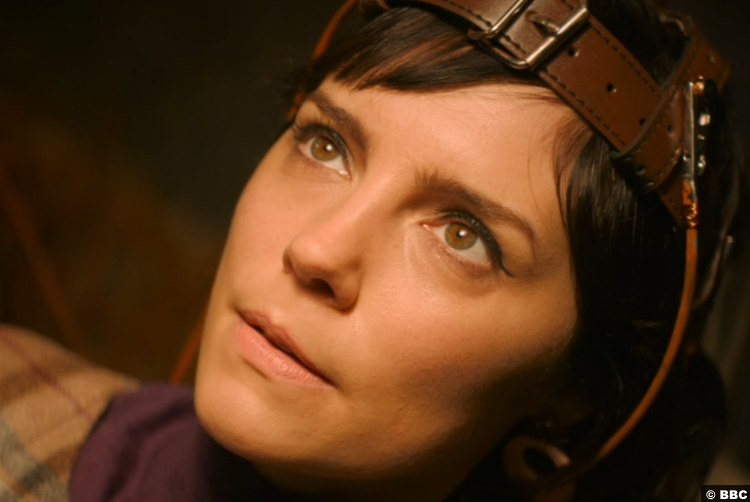 After the intro, we see the TARDIS traveling through Time and space, controlled by a Weeping Angel that projected itself from Yaz’s phone at the end of the previous episode. The Doctor warns Yaz and Dan to stay un-blinking on the Angel, as it prevents it from attacking and displacing them all in Time, which is incredibly dangerous to happen in a moving TARDIS, we learn. However, the Thirteenth Doctor’s brilliant idea is to reboot the TARDIS, through whichever action that implies, causing a “dimensional compression” that should eject all quantum life forms.

And her idea worked. The only downside as the Doctor posited was that it would take a considerable amount of Time for the TARDIS to reboot and become operational again. While trying to assess the damage and the Time and place at which the TARDIS “landed,” the Doctor opens up the door of the big blue police telephone box to startle an elderly couple using the TARDIS’ phone to seemingly contact the officers that would be inside. After assessing the timeframe and inquiring about why the elderly couple was trying to call the police, our titular heroine storms off to see what’s making her sonic screwdriver go haywire, leaving Yaz and Dan in charge to help the elderly couple, who’s looking for Peggy, the mischievous missing girl.

The episode jumps to a conversation scene between a mysterious Mrs. Hayward and a local priest over one of many messages the seemingly addled woman had sent to the entire village, warning them to leave. After a minor verbal confrontation, Mrs. Hayward implores the priest to count the headstones at the church graveyard, telling him that there might be more headstones than previously thought. However, upon hearing the villagers call out to Peggy, the missing girl, Mrs. Hayward storms off, with a very foreboding “It’s happening again.” In the meantime, the Doctor followed her trusty sonic screwdriver, which took her to Professor Jericho, just in Time for tea – which he served to Claire to try and calm her down from her unpleasant experience of channeling another entity.

After hurried introductions between the Doctor and her host, Professor Eustatius Jericho, the Doctor reveals that the sonic isn’t reacting to his experiments, but to his patient, Claire, who’s displaced from 2021 to 1967. Claire excuses herself into the bathroom, while the Doctor accidentally stumbles upon Claire’s sketch of a Weeping Angel – a hazardous thing to sketch or draw, since an image of an Angel becomes an Angel. Upstairs, in the bathroom, Claire discovers that she has a pair of Angel wings. But not lovely, white, and light-radiating wings. Instead, Claire appears to have a pair of stone wings like the Weeping Angels.

At the same time, the priest, who was counting the headstones, finds an additional monument, a statue of a Weeping Angel, which attacks the priest. Yaz and Dan, who remained alone in the field looking for the missing girl, were also struck by the Weeping Angel and displaced in Time. The episode then cuts to Bel, whom we met in “Once, Upon Time,” recording another message to Vinder while landing the Lupari ship on the planet Puzano, where she soon finds out about a mysterious transport off-world and seemingly away from the Flux cataclysm from a newly acquainted individual.

Back in 1967, Jericho, enraged by a broken window due to a thrown rock, opens the door trying to find the culprit, revealing several Weeping Angel statues at the front door. The Doctor explains what the Angels are and how they work while attempting to prevent the Angels from entering the house. Claire explains to the Doctor that she researched the village when she had the first premonition, only to reveal that everyone in the town disappeared on the same day – November 21, 1967. But that wasn’t the first time, and Claire explains that it already happened before in 1901. In a brief moment when the Doctor wasn’t looking, she also squeezed a few specs of dust from her eyes. That usually isn’t a good sign, especially considering the pair of Angel wings she had in the bathroom. 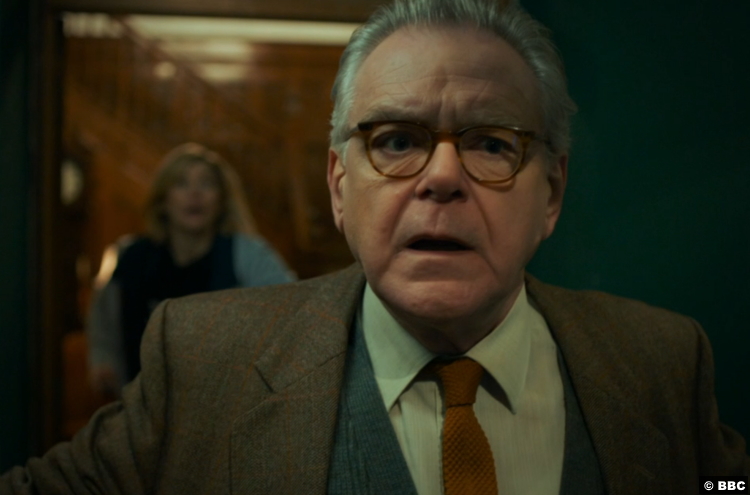 Yaz and Dan find themselves in the very same field they encountered the Angel on, but in broad daylight and with no Angel in sight. So the pair of companions investigate the nearby village, to discover that there aren’t any people left in the town, apart from the very girl they were initially looking for, Peggy. Peggy reveals that the Angels sent them back to 1901, that they’re even present in this Time as well, and that everyone should stay within the village, which, much to Yaz and Dan’s surprise, is entirely isolated in Time and space. “Quantum Extraction,” says Peggy.

Back, or rather forward in 1967, the elderly couple looking for Peggy is arguing during the search when they discover a Weeping Angel. It’s revealed, throughout the episode, that they’re Peggy’s great uncle and aunt, and that his bad-temper is the most likely reason that Peggy ran away from home to begin with. Regardless, unfamiliar with the being’s nature, they fall into its trap, and the Angel displaces them both. As they’re displaced, Mrs. Haywire appears in front of the statue, which apparently isn’t reacting to her presence. At Jericho’s home, the Doctor, Professor, and Claire lock themselves in the basement, with an established surveillance system set up by the Doctor, continuously observing the Angels, preventing them from moving. 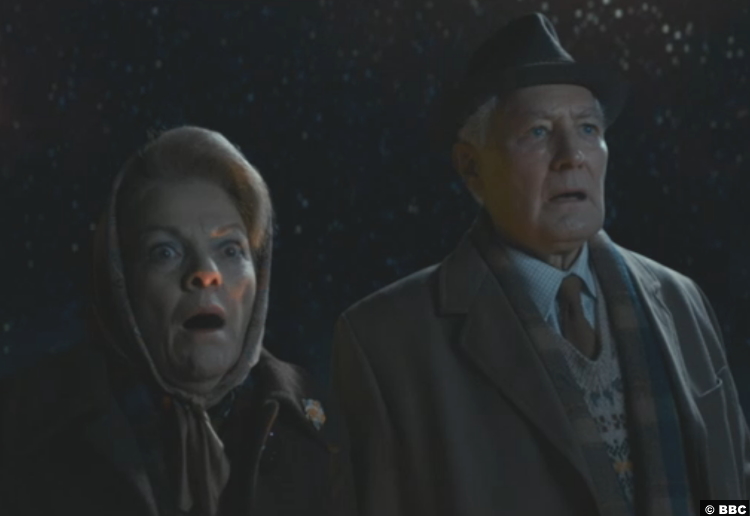 But what contains an image of an Angel can also become an Angel, and one projects from one of Claire’s previously mentioned sketches. Luckily, with the Doctor’s quick thinking the drawing was disposed of before the Angel could grab and feast on anyone’s potential energy. Instead, Claire reveals her now petrified arms, stating that she’s confident that there’s a Weeping Angel within her. The Doctor then enters Claire’s mind, and the episode takes us to an almost biblical scene. A rogue Angel, seemingly the very same one that highjacked the TARDIS, is now tempting the Doctor with her erased memories in exchange for protection. Protection from other Angels, called the Extraction Squad, working for The Division.

In the meantime, Bel’s new acquaintance brings her to the aforementioned off-world transport’s place, where Azure appears on top of the mountain, like a messianic figure, offering salvation, and safe transit to a galaxy unaffected by the Flux. And the transport in question is actually a Passenger form, which Bel immediately recognizes and escapes, taking her acquaintance with her. Back in 1901, Peggy, Dan, and Yaz stumble in front of another Weeping Angel, but so does an elderly couple who was transported back to 1901. Still unaware of the Angel’s true nature, the elderly couple gets near it, and the Angel kills them both. Then, in Jericho’s basement, an Angel and Jericho have a verbal stand-off while the rest of the Angels gain access to the basement. 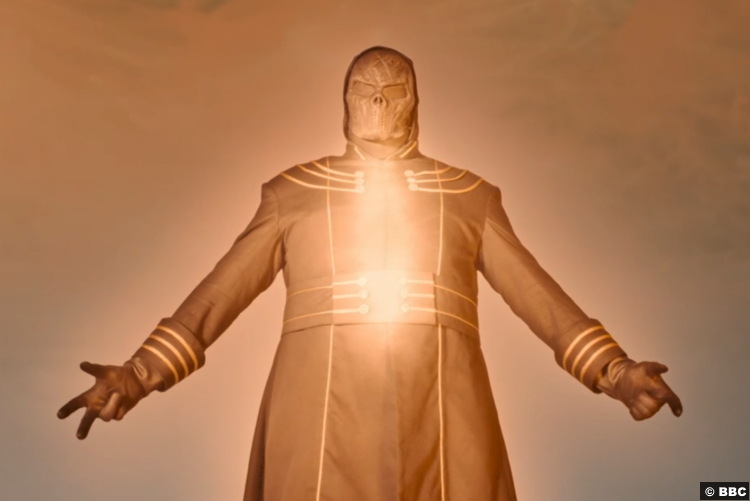 However, inside Claire’s mind, the resident Angel explains that it was The Division, and the rest of the Angels hunting it are too, and so was the Doctor. It would appear that The Division uses Weeping Angels as operatives; according to the Angel, it uses everything and everyone, every species, every world, every moment. Jericho disrupts the conversation and “disconnects” Claire and the Doctor by throwing a cup, while all three try to escape the basement beset by Weeping Angels, using the tunnels dug by the house’s previous owner. 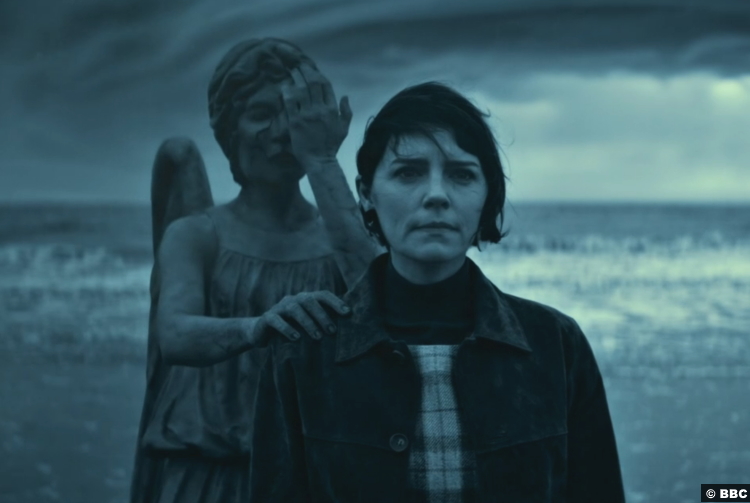 Yaz, Dan, and Peggy return to the field adjacent to the village to discover an untraversable time rift that connects 1901 with 1967. Mrs. Hayward stumbles by and reveals that she’s Peggy, but 66 years later. Moreover, she discloses that the village’s burial site isn’t a burial site at all. But it is made of stone. Meantime, in the escape tunnels, now filled with Angels, one attacks the Professor and displaces him to the other side of the time barrier, to 1901, right next to Yaz, Dan, and little Peggy. The only one left in the tunnels was the Doctor, to whose surprise the Angels aren’t attacking anymore. 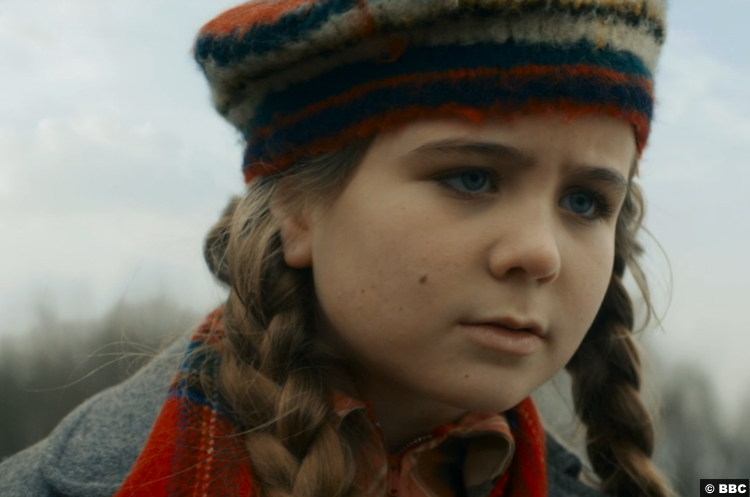 Upon exiting the tunnels, the Doctor stumbles upon the same barrier, with Yaz, Dan, and the company at the other side, and a choir of Weeping Angels, apparently helmed by Claire, behind her. Claire reveals that her Angel has been communicating with other Angels, offering the Doctor in exchange for its freedom. And when the other Angels conceded, the Doctor was effectively recalled into The Division – and turned into a Weeping Angel. Intense music rolling, zoom out the camera, and… Cut, cue the credits. 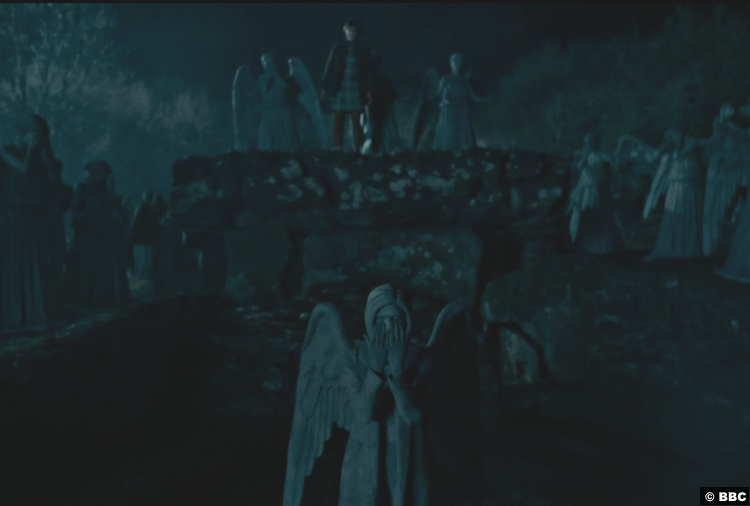 8/10 – “Village of the Angles” is undoubtedly the best episode in this season. If Flux continues down this road-building upon each episode, it might just rinse out the somewhat bland aftertaste the previous episodes of the season have left on the palate of the series’ new and wisened fandom. In addition, the episode’s story has the right amount of complexity and an exciting and coherent narrative.

The Angels appear scarier and more menacing than ever, Jodie Whittaker’s performance was the best we’ve seen so far (not due to lack of talent, but because of subpar writing), the supportive cast was exemplary, and Kevin McNally is fantastic in his performance of Professor Jericho. Overall, the entire narrative of the episode was exceptionally well-though off. Still, it does raise specific questions, like, what happened to Williamson and his tunnels, and given the episode’s centering on the Division, how does the “Once, Upon Time” episode, in which the Doctor is a Division operative, tie into the overall narrative of the season?