With last week ending on such a bleak cliffhanger, it’s no surprise that we pick up right where we left off. In case y0u wiped your memory as a protective gesture, it ended with Leland killing the Monsignor, who was trying (successfully) to keep him away from Grace. Wow, that works on multiple levels, since Leland is so far from small-g grace.

Moving on, I hate to have to remind y’all of this, but the Monsignor’s last words were words of love for Father Ignatius. And in case that didn’t gut you and your soft feelings, the opening scene features Ignatius’s first reaction to seeing the body. He makes an awful, primal sound, and once again, the show makes us think about what could have been. How dare you make me have emotions! 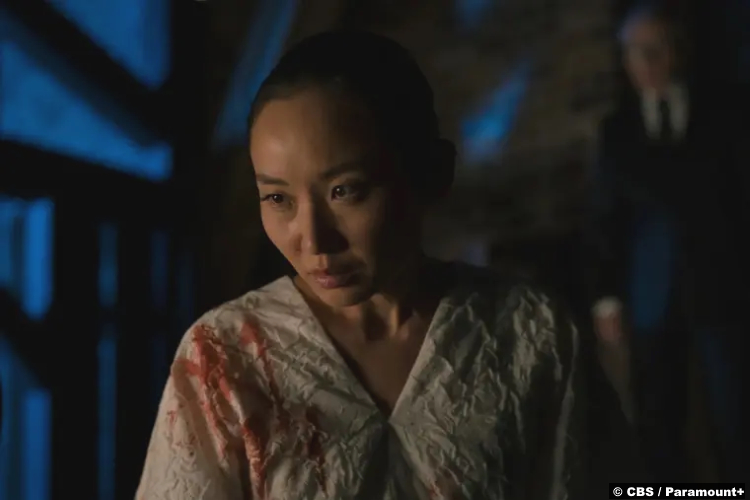 Grace isn’t technically supposed to be in the country, so they shuffle her off to the Vatican. Bye, Grace! Further, despite his grief, or perhaps because of it, Father Ignatius believes they should keep working. So, the assessors have a new case. It’s pretty standard, as far as their cases go. Just a little run-of-the-mill demon infestation–you know how it goes. The notable aspect, though, is that it’s Kristen’s next door neighbor, Sheila Gibson (Quincy Tyler Bernstine), and her family.

And when I say “next door,” I mean right there. I guess I never noticed that the Bouchard home adjoins another one. Then again, we don’t see it much from the front. We usually just see the back. Anyway, Sheila seems like a lovely woman. Too bad she’s dealing with things like–let me check my notes–a “demon eyeball in the toilet”?  That’s what I wrote.

And actually, that’s how she describes it. If an eyeball in the toilet sounds familiar, then it’s because Ben found one when he was trying to fix Kristen’s plumbing issues. He didn’t mention it to her because she was already going through a lot. But it does seem important now. The neighbors have a shared sewer line, which explains how eyeballs could travel from one loo to the next. That doesn’t, however, answer some bigger questions like, what the heck is going on here? 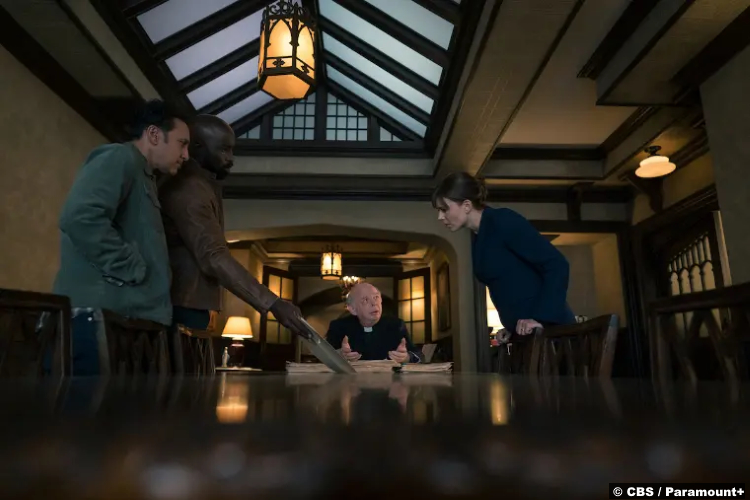 First, yes, there is the demon problem itself. There is also other weirdness, though. For example, when Kristen hears that one of the issues is disturbing noises, she immediately worries that it’s her daughters, trying to be scary. When she asks Lynn about it, she says that the neighbor’s daughter Crystal is actually the one making spooky sounds through the wall. Laura confirms this. However, when Kristen mentions that her daughters have been talking to Crystal, Sheila is like, I don’t have a daughter. Then who was phone?!

We never do find out who exactly has been tormenting Laura, though, and the Church approves an exorcism for the neighbors’ house, which is successful. But you know how when an exterminator treats, say, an apartment building, they try to treat all the apartments at once? That’s, of course, because if they sprayed only one apartment, then the pests are just going to flee to all the other flats. And I’m saying all this because that’s what happens. The Gibson home is demon-free, because they’ve all scurried next door to the Bouchards’.

Meanwhile, Edward contacts Kristen to tell her the sad news that Andy has died in an avalanche. The little Bouchards, however, do not buy this for a second and instead, instinctively know that Leland is behind it. So while their mom is Skyping with Edward, they ping Leland’s Pollie the Pig account, the notifications for which they hear chiming in the background with Edward. Yes, these little ladies are incredible.

After that, Andy just shows up at the house with no memory of how he got there or what exactly happened. There are some strange side effects, though. For some reason, Kristen’s kept Grace’s drawing of her Andy vision. When he sees it, a drawing of his captivity, on the fridge, he collapses. He’s very friendly with Sheryl, which should be a big red flag. Oh, and also, Kristen finds him trancing out in the half-finished new addition. There’s also a hodgepodge of Greek, Aramaic, and Cyrillic on the wall, which mentions Sister Andrea. 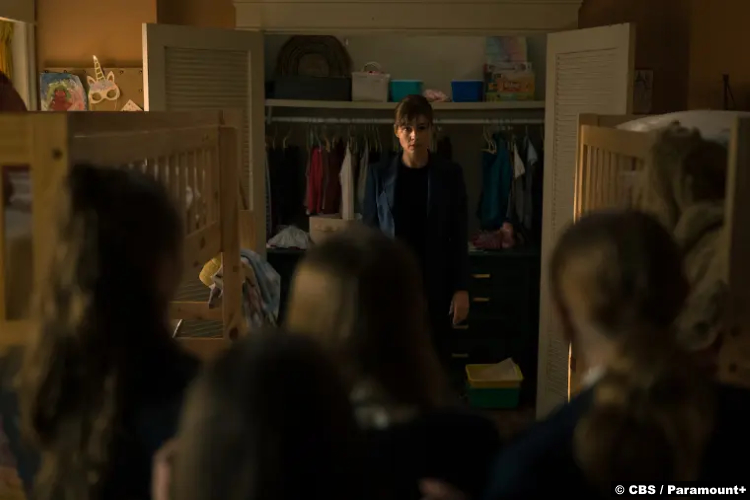 And that’s how she meets the Bouchard girls. She finds them overwhelming at first, as most people do, I think. But she’s patient with Lynn when she tries to pick the Sister’s brain about becoming a nun, even though Andrea is busy beating demons to death while they talk. (Lynn also takes it in stride that the nun is smashing the walls and floors for no apparent reason.)

Then after all that, there is a lovely character moment between Kristen and David. She’s made promises to God in exchange for Andy’s safe return and now she doesn’t want to pay up, because it would require her belief. And she doesn’t want to be a believer. (I don’t know why I’m thinking of Kim Kardashian’s “I don’t wanna like olives” tweet.)

They have to give you that nice moment because they end the episode in classic bananas Evil style. To that end, something draws Andy back out to the addition. The scene he finds is a Satanic perversion of the Nativity. That demon baby is back, lying in a manger, and surrounded by a who’s who of this show’s demons. And Dr. Kurt, as if this moment wasn’t surreal enough. 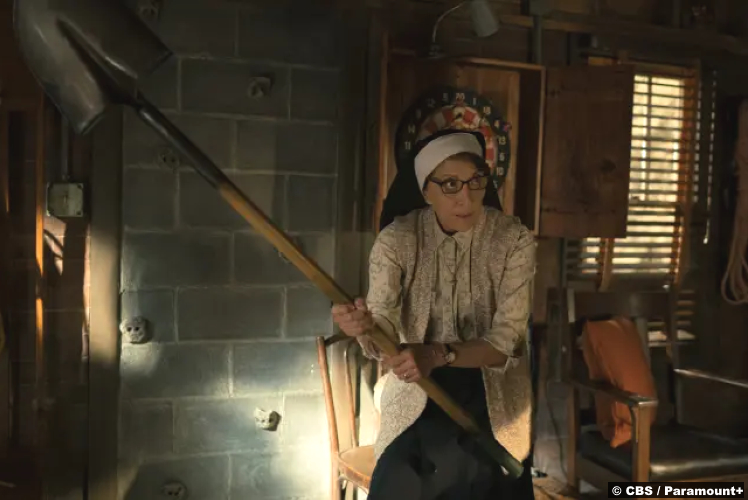 At the same time, you might remember that Kristen felt guilty about feeling relief that her egg would not be used. Welp, that feeling had a good run, because her lawyer is back. And what had happened was, they didn’t use Kristen’s egg for Logan and Valerie. That was someone else’s egg. Kristen’s egg is maybe still out there, with the last trace of it being its delivery to a corporate address.

If you’ve seen literally any TV show or movie before, then it shouldn’t come as a surprise that the address is for Corruption Co, the company where Leland and Sheryl work. Sheryl is mildly surprised to see Kristen, but certainly not as surprised as Kristen is. Sheryl really can’t talk, though, because they’re having a work party. You see, one of the employees is pregnant.

Ain’t that sweet? And as Kristen looks on in horror, the proud soon-to-be papa–Leland, of course–joins the festivities. After a brief reference to his becoming a father at his big age, he looks directly at Kristen when he says, “We’re gonna be parents.” Oh, God. Oh, no.

8.75/10 – That is certainly a bold way to end the season. As for the season overall, while there were a few bumps, I enjoyed it for the most part. If I had to pick a MVP, then it would definitely be the Bouchard gals, followed closely by the Most Dramatic Man Alive, Victor LeConte. Anyway, I’m looking forward to season 4, especially with these new developments.