Because of its tone and like, the many times I’ve had to talk about goat-men, it can be easy to forget that this is a show about, well, evil. Even when dark things happen (see also: last week’s ending), the show sometimes mitigates the impact with its other, more absurd shenanigans. That can mean that things never really get that heavy. It also means that when they do, it’s like a gut punch.

See also: the end of this episode. But before we get to that, let’s start with last week’s. Kristen is meeting with Dr. Kurt this week to talk about what happened with Logan and Valerie. She feels guilty about it, but for two different reasons. For one, she feels guilty because she thinks she didn’t do enough when Logan came to her with his fears. 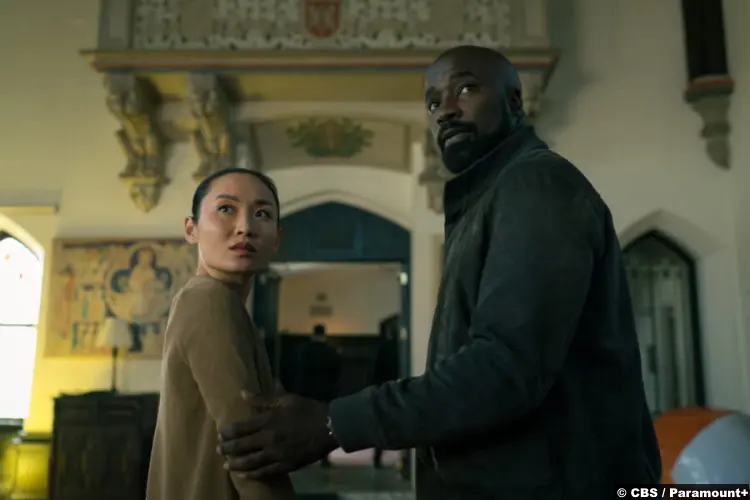 Dr. Kurt basically tells her, as I would, that she had no way of knowing how bad things would get. Like I said last week, hindsight is 20/20. In other words, the red flags seem obvious in retrospect. But you don’t know in the moment how events will play out. Even tarot card readers will tell you that the cards show the situation at present. You can alter the future that the cards predict by changing something now.

I don’t know if that lands with Kristen, though. She also seems to be feeling guilty that she feels relieved. As you’ll recall, she wasn’t that keen on the idea of her egg ending up with strangers. But while it may not feel right or good to feel relieved, I think it’s probably a normal reaction as well. As Dr. Kurt tells her, thoughts–even dark thoughts–aren’t actions.

Thoughts, however, aren’t always harmless. We see that in action with this week’s case for the assessors. The Church wants them to check on a parishioner, who’s suddenly been absent from services. The man is Henry, who once was a bank teller and is now super-rich. He’s holed up in his boat, though, afraid to leave the cabin, because he believes an entity is stalking him.

He shows the team his surveillance footage, which shows a black figure glitch-walking down the pier and onto his boat. And when I say “black figure,” I mean that. It looks like a construction paper cut-out; it looks like a literal shadow. It also looks like it’s wearing a hoodie, but okay. 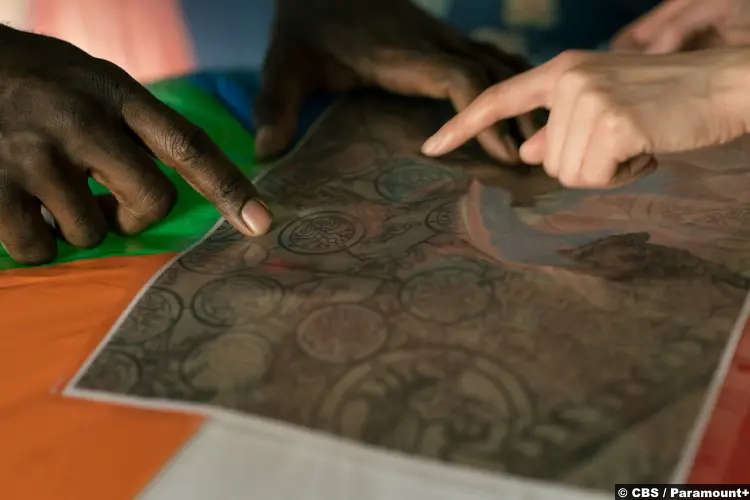 The team is kind of at a loss to explain it, beyond suggesting that it’s someone trying to rob Henry. Grace, however, who is already back to prophecy, connects a sigil, the royal sigil, to him. Henry has actually seen the symbol before. He got rich, you see, after a bank customer gave him a stock tip. She also gave him her lucky pen, which displays the symbol, the logo for the company at the center of this stock tip. [Also, this company’s vague-ass–yet varied–business interests sure do sound like what Infernal Enterprises does.]

When they talk to her, she reports seeing the same figure. It haunted her until she gave away everything she bought with her newfound gains. The uncle who gave her that lucky pen also went through the shadow experience. His situation was much more dire, though, as he used his riches to pay for stuff like LASIK and a nose job. He’s mutilated himself and his wife (who got breast implants) to end the torment. My goodness, that is dark.

And I have to say that I think it’s irresponsible for the team to share this with Henry. After all, as he points out, he’s used that money for stuff like his mom’s hip surgery. What’s he supposed to do, pull it out? In any case, they don’t come up with a good solution for Henry. And in another dark moment, his story ends in tragedy. After Ben receives a security alert from the boat, he races over there but he’s too late. Henry is face down in the water.

Meanwhile, Karima used the stock tip herself and now she’s seeing the figure. So we have ourselves a Ring experience, as the show points out. It’s not giving away your stuff that ends the harassment but passing on the tip. Karima gives it to Ben, who gives it to Kristen, who gives it to that guy she whacked with the frozen food. As the Bouchard little ladies share, he’s all over VidTap, being a jerk to multiple people.

Speaking of the Bouchard daughters, their chaotic energy is my favorite part of this week. First, Dr. Kurt shares his book with Kristen. It looks like gibberish to her, as most of it is written backwards. The girls pick it up, though, and love it. No longer a snoozefest about his spiritual quest, it’s now a horror story about a mom with four daughters. Obviously, it would pique their interest. 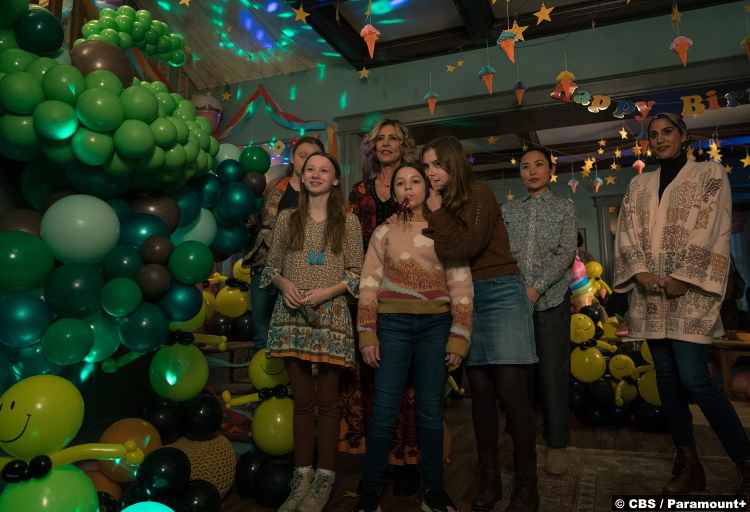 At the same time, Grace is finding it hard to get back into her groove. The world’s most humorless array of priests has gathered plenty of pool toys for her, as inflatables juice her power, but it’s still not working. (My personal favorite is the sunglasses duck.) She misses the kids at her daycare, which closed in her absence. So David brings her to Bouchard family night at a kids’ play place. She has a blast in the ball pit with the girls and it sparks her visions. (And speaking of my personal favorites, I really enjoyed the table full of sunglasses-wearing priests trying to look inconspicuous.)

The family night is part one of Kristen’s birthday celebration, by the way. Part two is a surprise party at the house. This comes with all kinds of revelations, like that Lexis isn’t inherently bad. People want to make her so, which means that she needs Kristen to protect her. Grace also shares that Andy will come home “next Thursday.” To that end, when she meets Sheryl, she tells her, “I won’t blame you for tomorrow night.”

Sheryl has no idea what this means, but when she sees Grace showing a drawing of the Andy closet to Kristen, she snaps a pic to show Leland. And then it’s tomorrow night and he just goes after the prophet. After Leland kills a guard, he gets into it with the monsignor. Korecki manages to fight him off, but at the expense of his own life. He dies there on the floor with Grace, his last words a message of love for Father Ignatius. That, their missed chance, was what was on his mind when it all went dark.

9/10 – Again, Leland, like the show itself, is often so campy that it can slip your mind that he’s a foot soldier actively working for literal evil. This week’s episode was a good reminder of that.