I’m not sure if Victor LeConte is a force for good or evil. Sure, he’s ostensibly working for good, but as this episode examines, people can justify a lot just by claiming it’s for a higher purpose. One thing I can’t hold against him, though, is his love for doing things just for the drama of it.

Sure, he might not see it that way. But I’m not sure how else I can interpret, say, his penchant for showing up unannounced in the dark in David’s bedroom. This week, he even brings the squad. I’m sure he has some rational explanation for why he does things the way he does, but it plays like he loves a show. 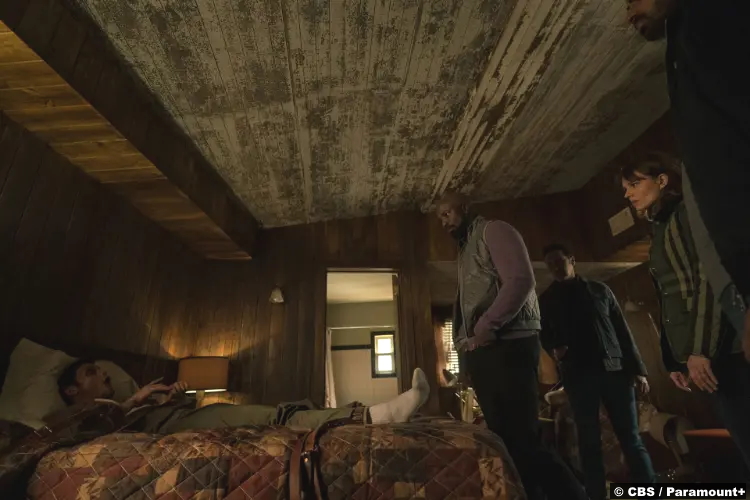 Anyway, he’s in David’s room this week–alone at first–because they have a new task for him. It’s pretty easy, as things go. Someone is going to invite him to dinner and then he’s going to put a little toy owl in their child’s bedroom. Easy peasy lemon squeezy. Oh, except that it’s Kristen who’s going to invite him and he has to put the owl in Lexis’s room.

We’ve known all along, of course, that there are sinister forces congregating around Lexis. LeConte says explicitly that they’re grooming her to be the head of one of the Satanic houses. Obviously, he cannot allow this to happen. I’m not sure why they need the owl, though, considering how much he seems to know about things. But more on that in a bit. First, there’s this week’s case.

A cult deprogrammer has contacted the assessors for help with his own case. He and his team have removed a young man from a cult that centers around the leader Yeshua. The deprogrammer explains that the first step in deprogramming is breaking down the subject’s identity so that they can rebuild it. Hmm, sounds a lot like what cults do, but sure. Anyway, that part was successful. The possession that came afterward? Less so.

His team has been keeping the young man, Owen (Kevin Paul), in a motel. It’s been a whole month, though, and they’ve seen no progress. The young man’s parents explain that his girlfriend, Lilli (Clementine Wurzbach), is the one who got him into the cult and she’s still there. When the assessors meet the young man, he sure shows all the signs of possession, like wild aggression and Latin babbling. That last part is especially telling because his parents claim that he’s never studied the language before. Yet here he is, correcting David’s conjugation.

The next step for the assessors is to visit the cult and talk to the girlfriend. It’s your typical cult, in that it seems very pleasant on the outside. The biggest shocker, at least for Ben, comes when they meet the cult leader, the fabled Yeshua. It’s actually another member of the Science League, Renee (Gia Crovatin). It’s not just the fact that Ben knows her that comes as a surprise, but also the cultishness of it all. Like, she’s obviously someone who cares about science, so why is she dabbling with this BS?

As she explains, though, she believes that science and faith can coexist. I can’t argue with that personally, but I do draw the line at their demonstrations of faith. To be more specific, when Kristen and David leave Ben alone at Yeshua HQ, Renee and her minions basically strong-arm Ben into participating in a ceremony of sacrifice. It begins with a member hitting herself to relieve the guilt she feels. Renee wants Ben here for this because Karima apparently told her how much guilt Ben carries over his strained relationship with their mother before her death. 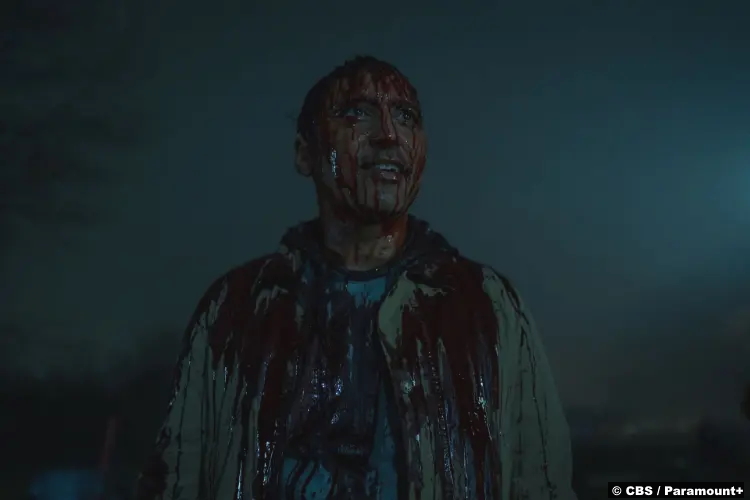 That will require a strongly worded conversation with Karima, in my opinion. But yes, this is where I draw the line: encouraging your followers to hurt themselves for any reason. I also don’t love the eventual goat sacrifice. That was a great goat. There’s one shot where it seems to be side-eying the procedures, like, can y’all believe this? Excellent goat actor, I’m saying. Very sad that it fake died.

After the sacrifice, they douse Ben in its blood for some reason. Well, I guess there is a reason–as he explains to David and Kristen when they return, it’s “religion”! Neat. On that note, after they bring Lilli to see Owen, the possession seems to cease. Was he never really possessed to begin with? Or is something else happening? Don’t know, but maybe we’ll pop back to that in a later episode.

As for the events that began this episode, the whole reason they leave Ben alone there is because Victor calls David and insists that they meet immediately. (When David did have dinner with the Bouchards, he saw the owl in the girls’ room and removed it.) Kristen has noticed how often David seems to be ducking out for mysterious priest business, so she won’t let him go without her. He tries to leave her in the hallway, but that only works for a bit. She comes right in to find David meeting not only with Victor but also with the aforementioned squad. 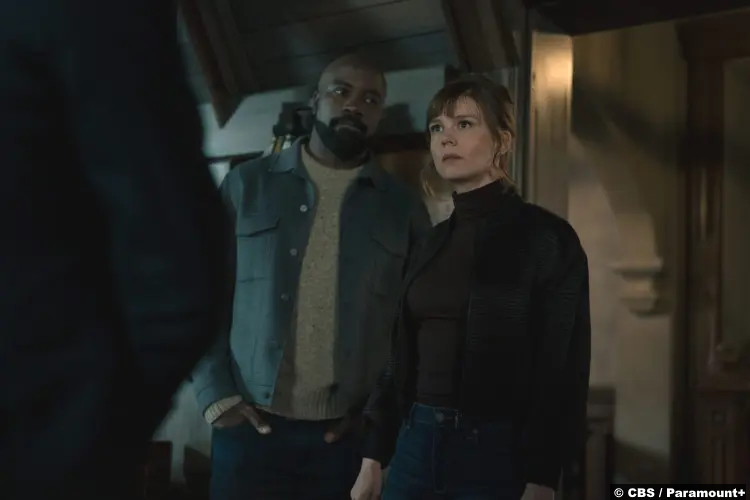 Victor, never subtle, lays it out for her straight. Leland has been sniffing around Lexis because “He is intent on putting your daughter on a demonic throne above the destroyed world.” Uh, okay. Kristen doesn’t take it well. I’m sure it doesn’t help that Victor knows so much about her, including the visits from George the demon and oh, also the fact that she murdered Orson LeRoux. How does he know all this? How did he know she would invite David to dinner? And what is the owl?

Kristen doesn’t really care about all that at the moment. She just wants to go home and hug Lexis, which she does. It’s better, though, I think to know about the threats you’re facing. They’re coming fast, after all. To that end, after Dr. Kurt talks to Leland about the book he’s writing, Leland cajoles him into what is essentially a demonic spell against writer’s block. 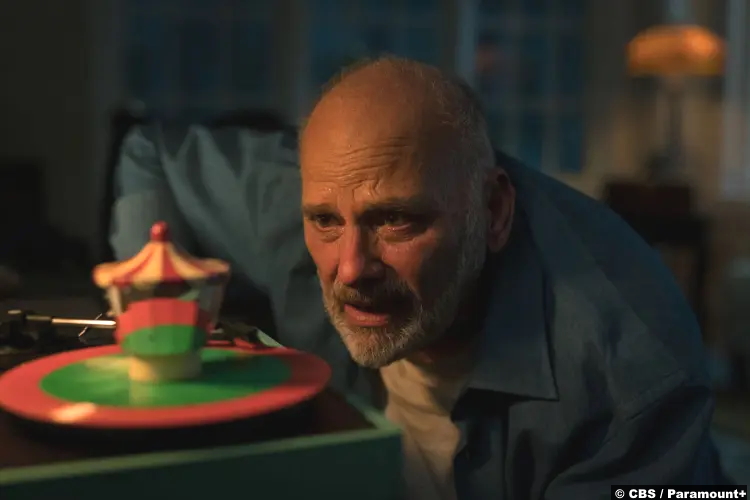 Look, I don’t love a blinking cursor either, but I can’t say that I’d ever douse my laptop in blood* and sing a few verses of “Alouette” to make it stop. (Wow, that song is a lot darker than I ever knew.) The problem with devil bargains, of course, is that they demand a lot. And this one runs out fast. Leland helpfully explains, though, that more help can come, just as soon as Dr. Kurt cuts off Sister Andrea’s hair. You could do that, sure. Or you could not do that, and just start writing. I think I’d choose the option that doesn’t mortgage my mortal soul. A little more challenging, a lot less dangerous.

8/10 – I liked this episode, but it sure did seem to wrap up its cult threads abruptly.

*I would (unintentionally) douse it in coffee, though, which is why I’ve been on a slight delay.