Ah, yes, that’s what I like. As I mentioned a few episodes back, these are my favorite kinds of cases. I don’t want big philosophical questions, sorry. Sometimes I do, I guess. But more often than not, I just want something fun. Spooky also helps.

This episode, unfortunately, is pretty light on the spooky. Well, your mileage may vary. I am impervious to possession stories, in that none of them, including the heavy hitters, scare me. Maybe it’s that a lot of them involve Catholicism, which isn’t my faith, so they don’t have the same effect on me as they would on someone raised in that church. Or maybe I just don’t see the point. I’m always like, you possess them, and then what? 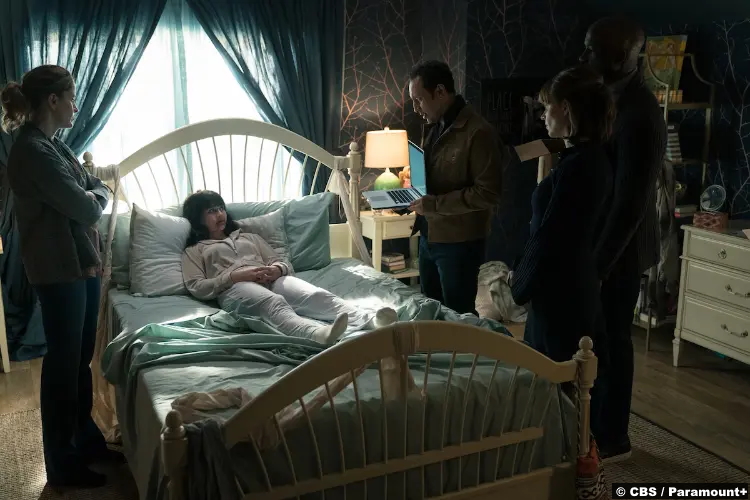 Anyway, I bring this up because that’s the case with which the assessors begin, a young woman who is possessed. Allegedly. We can see the evidence of her infernal internal roommate through the videos she’s posted. Whereas episode 2 involved NotGoogle Street View, this week’s episode features NotTikTok. Everything’s happening on VidTap, which is actually the successor to TikTok in the show’s world.

Through the app, the young woman has documented her struggles against the evil which torments her. She eats glass, does the twisty body stuff, and speaks in a demonic voice. The latter piques Ben’s curiosity, because he’s heard it before, which leads him to find that multiple people have posted videos with the same Latin gibberish. (I don’t actually know if it’s Latin or if it actually means anything, but I’m just guessing.)

The videos all lead to the same source, a magician who’s using a different kind of magic now. He’s manipulating the social media algorithms to gain followers and influence. The team breaks this news to the “possessed” gal and her mom, who seems flabbergasted. This isn’t enough for Ben, though, who takes to the app himself to debunk the tactics these people use.

You can guess if you’ve spent any time on social media, that Ben’s video garners mixed reactions. Some people appreciate sense and logic, while others are outraged. They (or their loved ones) are too experiencing demonic vibes, BenS, and the vibes are very unchill! Now, listen. I don’t know if there is an epidemic of folks claiming possession on the clock app. What it does remind me of, though, are the stories of young people developing tics after watching videos of people with Tourette syndrome. (On a related note, I’ve also seen a couple of exposes of people whom others accuse of faking the syndrome for social media clout.)

All this leads to Ben seeing a video from Marie (Lena Hall), a mom of two, who pleads for help. Something evil is in her house and it seems to have focused on her young sons. She shares video footage of the way this thing, this entity, troubles them nightly. It looks pretty convincing, so the assessors meet with her and arrange to come back later to observe. Before they get there, though, Marie is live on VidTap, documenting the scary claw-like scratches something gave her and the boys. Later, she’ll say that she didn’t even open the app. 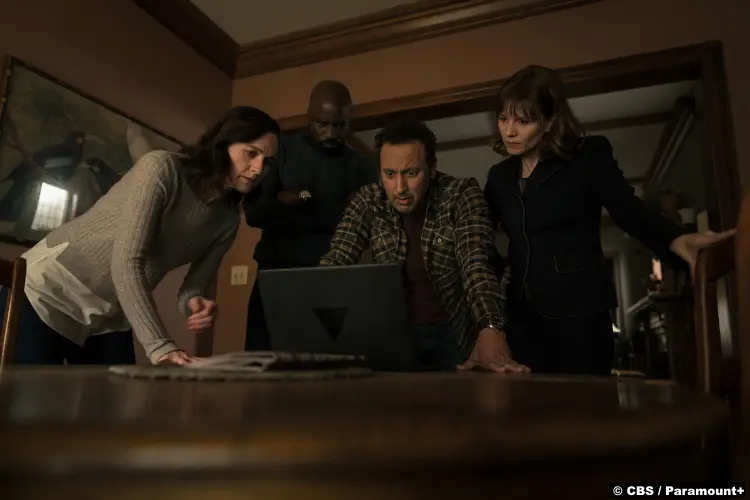 Ben “The S is For Skeptical” smells a rat. Coincidentally, Katie (Lilli Stein), another member of the Super Secret Science League, works for VidTap, so they pick her brain. She says that Marie’s claim is ridiculous. The app will not start live-streaming on its own. And while it may seem like magic, everything that happens on VidTap is a result of algorithmic manipulation. For instance, if you linger over a certain kind of video and the app will start serving up more content just like it.

What’s more, and I know this will come as a huge shock, is that people lie on social media. I hope you’re sitting down. To that end, Marie edited the videos after she uploaded them to the app. So while it’s technically a no-no, Katie gives Ben the raw footage. Raw is the right word, because, my goodness. The unedited videos show Marie repeatedly setting up the incidents she had previously documented. The claw marks, for example, were her injuring her own sleeping child with a kitchen utensil.

After seeing this, the assessors confront Marie. At first, she tries to deny that she would do such awful things. She pretends to conclude that she must actually be possessed. Then she fires up VidTap and starts live-streaming again about the demon inside her. It’s mostly just embarrassing, partly because of the truth in it. We’ve all seen the lengths people will go to for internet fame, after all.

So case closed on that. Meanwhile, ever since Andy left for his death trip, communication with him has been spotty. It’s always some fuzzy-ass image of him on a mountain and clipped audio. This week, it’s even more puzzling for Kristen when he doesn’t acknowledge something she says, a personal detail about their relationship.

That’s because it’s not Andy. It’s Leland, pretending to be Andy. He’s keeping the real Andy captive, where he and Sheryl are draining him for those whatever IVs. I mentioned last week that I feared Leland’s next plan and here it–or at least, one of them–is. Andy is going to die on that Nepal trip. Well, he’s going to die in this closet, but they’ll have Edward tell Kristen that he died in Nepal. 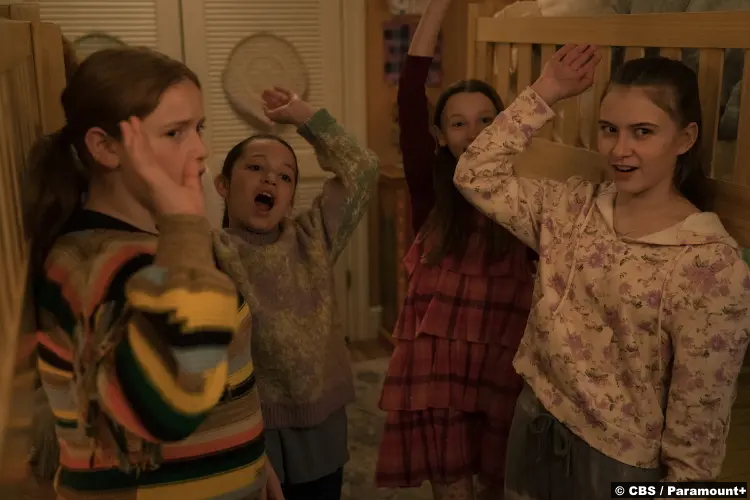 I certainly hope that’s not his fate, especially as I’ve really come to like Andy. It’s good then that we get a reminder that Leland is not as slick as he would have us believe. And “good” is the right word, because it is a really good reminder. Kristen, as we know, including in this episode, loses again and again to Leland. Her daughters, on the other hand, are a bit more successful.

Through their avatars in Bumblebee Valley, the Animal Crossing-esque game Leland set up to hook Lexis, they doxx Leland’s character. Not only do they name him, but they also name him in conjunction with the church. As they’ve also accused him of being a pedophile, the Monsignor quickly shows him the door. Leland, furious, vows to orphan the gals. Hmm, sure you want to bring more of their wrath upon you? It’s your funeral, I guess.

9/10 – This has been kind of an uneven season for me, but this was definitely not. It was highly entertaining, as well as the best episode of the season so far.