One of the things I’ve said several times when talking about this show regards the sentences it makes me write. You know, things like, “Leland murders him, then makes him into a curry,” when the “him” is a goat-man. Actually, that is a very good reference, because they’re back at it again this week by making me talk about goat-men.

I’ll get to that in a moment, but first, there’s a case. Just call me angel of the warning, baby. Well, call her that, because that’s what she is, if she really exists. Sorry, I’ll explain. There’s a building collapse. The exact cause doesn’t matter, I guess. It could be a regular gas leak or maybe it’s the work of that sinister organization which we’ll discuss shortly. But again, that’s irrelevant. What matters, as the episode title and my intro to this paragraph indicate is the angel. 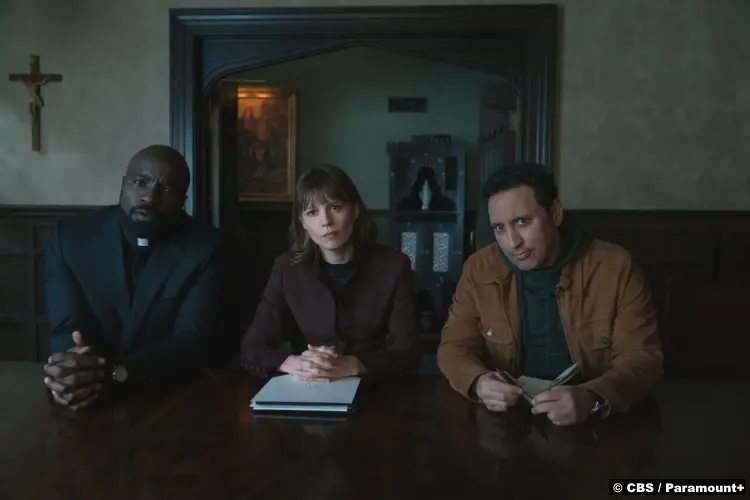 Due to the seriousness of the incident, there unfortunately are a lot of casualties. However, there are a few survivors. And while they’re almost embarrassed to admit it, they recount being led out of the building by a woman holding a lamb. This seems to be a pretty clear religious image. Because in case you’re unfamiliar with Christian iconography, the lamb is a common symbol. Most importantly, it’s a representation of Christ himself, as when John the Baptist says (in the book of John), “Behold the Lamb of God who takes away the sin of the world.”

It’s not surprising that the survivors’ first conclusion would be “Huh, there’s an angel.” I mean, what are the odds of a lamb-toting gal just happening to pass by this one building immediately after its collapse? Plus, we’ve all heard these kinds of stories after disasters and such. It’s like a regular category on Unsolved Mysteries.

However, a skeptical outsider might draw a different conclusion. These people had experienced a massive trauma, after all. Our minds work hard in general to make sense of the world, so in this scenario, they might very well invent a savior. That would be my first suggestion. The assessors, on the other hand, come up with some nonsense. Their idea, that the survivors might have seen the halal truck outside, with its lamb special advertisement, and conjured up a whole angel, is ridiculous. For one thing, if that were so, then why didn’t the angel look like the guy in the halal truck? 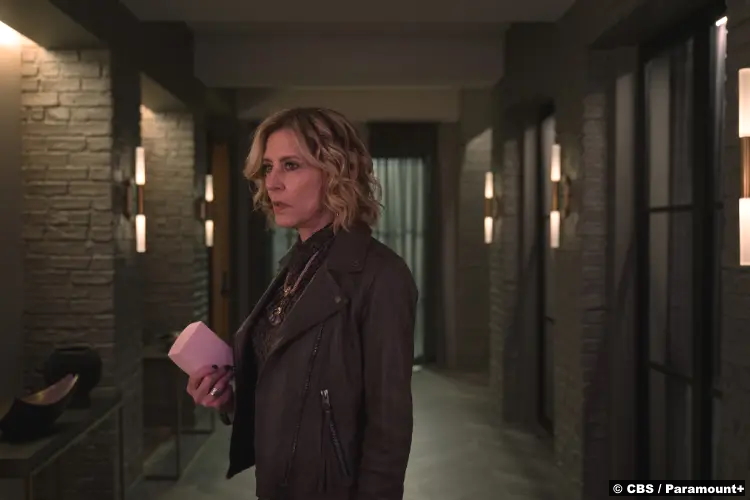 I mention the appearance of the angel, by the way, because one survivor describes the angel as Black. This troubles David, who realizes that he’s always pictured angels as the old masters painted them. He fears that it’s a sign that his visions are products of his own mind, which created images similar to ones he’d seen before. This leads to a mild argument with Sister Andrea, who insists that his visions are real. She’s so secure in her own beliefs that I think it can be hard occasionally for her to consider how other factors, like race, influence how other people think. This is all to say, though, that she later apologizes for not seeing David’s perspective.

The description the survivor gave is unexpected. However, another survivor’s account turns out not to be. Hers has the most extra detail, including her claim that she got a phone call just before the collapse. Not only did someone warn her to get out, but they also had a message for David. They wanted Jessica, the survivor, to tell him, “Don’t trust your sister.”

Jessica’s story falls apart quickly, though. First of all, she wasn’t even in the building–shades of The Woman Who Wasn’t There. But unlike the woman in that documentary, whose claims of being a 9/11 survivor seem prompted more by personal issues, Jessica has other motives. The assessors figure out, for instance, that she used to work for a psychiatrist named Leland Townsend. This is all a ploy then, part of Leland’s efforts to push out Sister Andrea, by driving a wedge between her and David.

Jessica doesn’t admit that part, but she does gleefully cop to being an agent of chaos. And when she says that people are getting meaner, she says there’s a reason. “That doom you feel? It’s justified,” she says, delivering those lines directly to the camera. No, ma’am. It’s not that people are meaner or that the world is getting more violent, but that we’re just hearing more about it. Humans are not meant to hear every bad thing that happens. A steady diet of doomscrolling isn’t good for us.

But of course, we know–at least in this show’s world–that the doom is intentional. It’s part of what they do at Infernal, Inc., or whatever Sheryl’s employer is called. And while she’s been working on that cryptocoin, she wants a promotion to head of Misinformation. That requires that she meet with the manager, the aforementioned new goat-man. He is a piece of work, with his terrible smell and more eyes than normal. 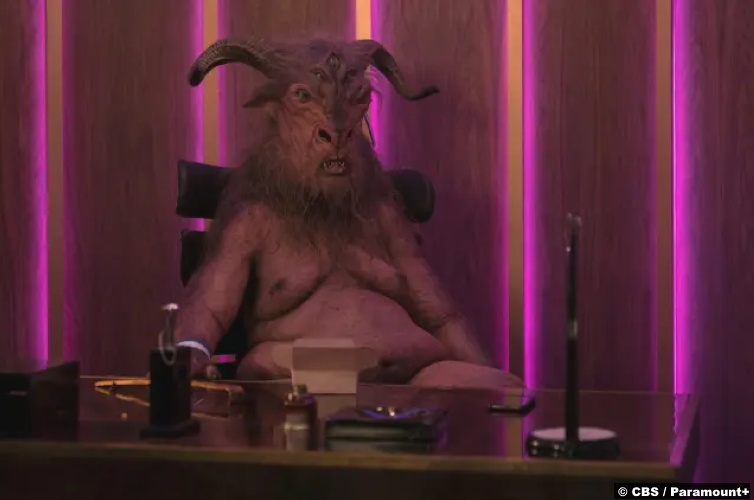 What a babe. It’s interesting, though, that his appearance seems to affect Sheryl so much. As we’ve seen so far, she’s been pretty gung-ho about all the evil they’re doing. The realization that she sees the manager as a goat, which her underlings do not, appears to shake her just a bit. Not enough to quit and become a decent person, mind you. Still, it’s curious.

Leland, of course, already sees these folks as they are, hence the goat-man therapist. Maybe that’s why he doesn’t seem that bothered that Sheryl took his spot. Or maybe the tribunal for Sister Andrea is distracting him. To that end, after she shuts down David’s attempt to get Dr. Kurt to admit that he’s also seen a demon, David has to find another strategy. So, he uses the conversations he’s had about the Catholic Church and race. 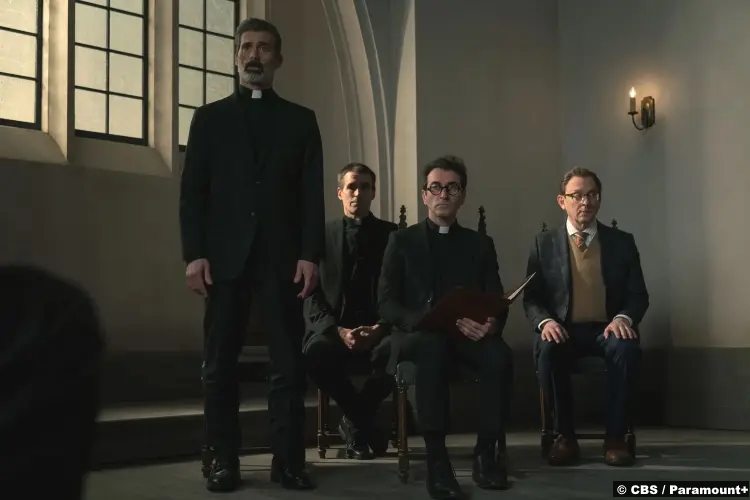 Specifically, he claims that he’s seen everything that Sister Andrea has seen. They can try to force him out, too, but they’ll be forcing out only one of three Black priests they’ve ordained the whole year. Hmm, wouldn’t look good for the Church, which really doesn’t need any more PR scandals. Basically, he’s backed them into a corner, a development which Leland seems to admire, even as he’s furious about it. It’s a win for David and for good in general, but I shudder to think what Leland will try next.

8/10 – I wish the fact that Sheryl is terrifying her own grandchildren with her misinformation work would have as big an effect as seeing a goat-man does. Though it doesn’t, it does give Kristen the opportunity to reassure her girls that they’re stronger than they imagine. The scene where she makes them yell at the train was really fun. I also appreciated the show returning to its previous discussions about racism within the Church. After all, there’s another line in the book of John about what God gave up out of love for the world. The world. The whole thing, not just some people. So, might want to get with that program.