I was thinking about watching this one horror movie tonight that I haven’t seen. Since I’m all alone at home this week, though, I thought it might be too scary. Instead, I watched a video of a couple reacting to the movie Hush, which is about a killer who terrorizes a woman who’s all alone. Even though I’ve seen it before, and despite my biggest dreams, I don’t live alone in the woods (like the woman in the movie), I’m still uneasy.

That’s the fear that animates the premise behind this week’s episode–the suspicion that we’re not safe at home. This is an old fear, almost primal, because our homes are supposed to be our safest spaces. Since it is so old, writers have been playing with the idea for a long, long time. You can see it replicate itself in folk tales, more modern urban legends, horror stories, and even movies like Home Alone.

As our lives have changed, so have the details of these stories. And one of the biggest influences on both our lives and the way these stories have evolved is technology. Due to the steep drop in landline usage, for instance, it would be hard to pull off a “the call is coming from inside the house” story twist. (The call could be coming from inside the house, yes, but tracing a cell phone wouldn’t be as immediate.)

At the same time, thanks to our cells, it’s difficult to find total isolation. (That’s why, especially in the aughts, we saw a rash of “no signal” movies, or why horror movie characters seem more likely statistically to lob their phones into a toilet or something.) The constant presence of our phones can be a scary prospect in itself, as seen in the popularity of the Black Mirror series, whose title refers to the unblinking eye that is the mobile phone screen.

We’ve brought technology even further into our lives, though, with smart home appliances and wearable devices that track our most private details, like how we sleep. And in order to sleep more soundly, many of us employ technological devices for safety. Devices like these, particularly home security cameras, present their own issues of security, though.

To put it another way, it’s one thing to live in a city like London, which blankets its public areas with CCTV. You’re in public, so you already have an expectation that people will see you. When you’re in your home, though, you think what you do is secret. However, if your camera system is wifi-enabled, then strangers can access it.

Jaslyn (Gabourey Sidibe) isn’t thinking about that at first, though. She’s just concerned about general safety. You might think she’s overly concerned, considering the fact that she and her husband Bryce (Max Greenfield) live in a gated community with security patrols. Jaslyn, however, has her reasons.

As we see in a brief flashback, Jaslyn was a child when someone invaded her family home. The image of that stranger in a rabbit mask standing in her bedroom would have been bad enough, but then there was the violence that followed. It’s understandable then that Jaslyn would go for something like the Aura, a doorbell camera with an accompanying app.

It’s easy to fool yourself into feeling safe with those things. That is until something actually appears onscreen. Then what do you do? You’re still in your house, alone in Jaslyn’s case, and vulnerable.

In her case, it’s a strange man who appears on the tiny screen. He looks like a more disheveled Riff Raff (the character from Rocky Horror, not the rapper), but he’s not outwardly threatening. He’s more plaintive, rather than malicious. It is weird, though, that he knows her name.

And yes, you might also think it weird that it takes her so long to recognize him as Dayle Hendricks (Joel Swetow), the janitor at her high school. There is some suggestion, though, that childhood trauma, as she experienced, can have long-lasting cognitive effects. Our memories are so flimsy to begin with, so given that, and the fact that her interaction with him back then turned unpleasant in its own way, the late revelation isn’t surprising.

Anyway, in true psychological thriller fashion, there is no evidence at first of the man’s visit. The neighbor across the street, for example, also has a security camera, which captured no one at their door. Jaslyn knows what she saw, though. And it’s not like Bryce doesn’t believe her, unlike many psychological thrillers, but that he believes there might be an alternate explanation. You know, like hacking.

However, in looking for stories about that, Jaslyn stumbles upon a video wherein the maker waxes rhapsodic about the capabilities of an Aura. As its “eye” is so much more advanced than ours, perhaps it can even see ghosts. Jaslyn’s later research certainly seems to bear this out, especially when she finds out that Dayle’s been dead the whole time. 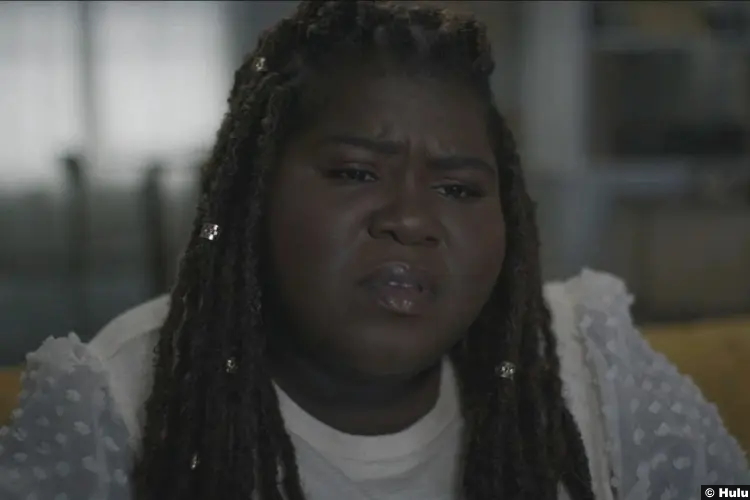 Her visits from Dayle resolve themselves in a way that brings peace to them both. But she’s not the only one living in that house. When another mysterious figure starts appearing on the Aura’s camera, Jaslyn knows instinctively that the woman isn’t there for her.

All along, the episode has been dropping hints about Bryce’s nature–his rigidity at work, the way he deals with the raccoon in their yard, etc. This new character at their door brings the biggest reveal about Bryce yet. And it ain’t pretty. Jaslyn ends the episode having solved one problem, but having another one pop up in its place. But like I said, the more we embrace technology, the more we’ll see that happen.

8/10 – On that note, I didn’t love that final, final reveal. I also didn’t think this was as effectively creepy as last week’s episode, although it had its moments. I did like, though, that they didn’t carry the “oh, nobody sees the thing but Jaslyn” detail throughout the entire episode. Gaslighting can be effective, but it’s often overused to the point of giving me hives. I also liked the resolution between Jaslyn and Dayle, which was surprisingly sweet. That final twist, however, undoes some of the satisfaction.