You’d be forgiven for assuming that this season is the final one for Stranger Things. After all, like Ozark, which just ended its own run on Netflix, this show’s newest season is coming to us in two parts. And then there is the episode length. 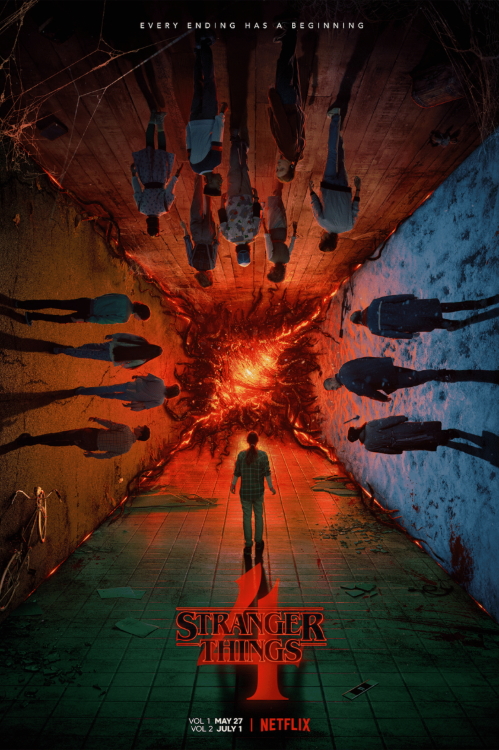 That’s why it took me longer than usual to get to this review. This season, or this part, is practically binge-proof. The shortest episode clocks in at over an hour. All of the episodes are basically feature-length, with the final episode of this part running close to two hours.

And you know what? It mostly works. While at least one episode feels like it has as many endings as Return of the King, the rest of them feel pretty brisk. The story, and the show at large, are surefooted now, as they should be after this many seasons.

For one thing, the extended lengths obviously allow us more time with the characters, which in turn allows more time for us to get to know these characters. Stranger Things has always had a large cast of characters, which has ballooned over the years. It can be hard to balance a cast of this size. In fact, that was one of my chief complaints with the last season, that the storyline too often gave short shrift to its many players. 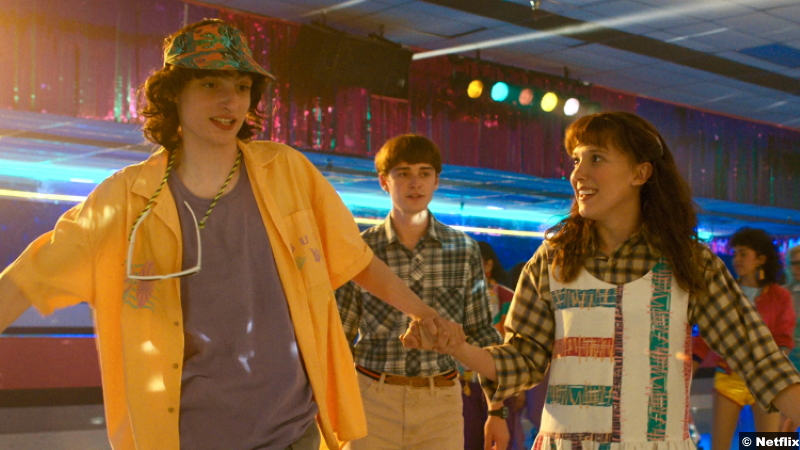 Billy’s sacrifice, for instance, is something that hangs heavy over the proceedings this season. Last season, though, it never really had the emotional heft that it should, mainly because our exposure to Billy has been surface-level. This season, we see the loss of him through Max, whom we know much better. And while I, for one, still can barely muster up a dollop of emotion toward him, I can understand why Max does. I can sympathize with the pain she’s in because it feels real.

On that note, that’s one of the areas in which the show has always been strong, in its willingness to acknowledge and explore that trauma lingers. That works especially well this season. The idea of a fear monster, a bogeyman that feeds on our unease, is not a new one. We can find this kind of character in all sorts of movies, books, and TV shows. Two of the most famous, for example, are It‘s Pennywise or the Nightmare on Elm Street franchise’s Freddy Krueger. The latter, by the way, clearly influenced this season and Krueger actor Robert Englund even has a role in it. 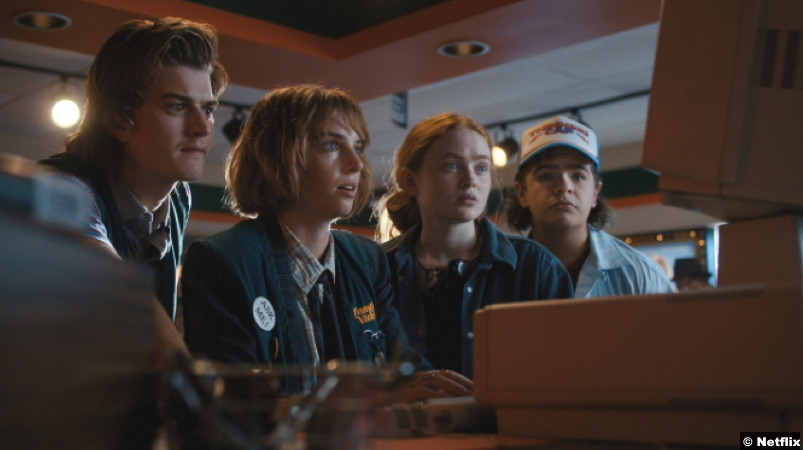 In Stranger Things season 4, the big bad is a combo of the fear monster and a similar kind, which feeds on trauma. An example of the latter would be BOB on Twin Peaks, whose chief food source, garmonbozia, is “pain and sorrow.” These creatures have varying motives, but usually, the common denominator is either sustaining life or gathering strength. Whichever need they’re fulfilling, they need a steady supply of bad vibes.

If you’ve seen literally any season of Stranger Things, then you already know that Hawkins is full of ’em. And it’s not just the characters we already know. As the show expands its vision to more residents, we see that things are tough all over. The first example we get is Chrissy (Grace Van Dien), a Hawkins High cheerleader.

As this is a show set in the 80s, we might have certain expectations for Chrissy’s character and her boyfriend, basketball star Jason (Mason Dye). However, the show subverts those expectations, at least for Chrissy, in its first episode this season. She’s not the stereotypical 80s TV or movie cheerleader we’ve seen before. You know, the massive b-word. On the contrary, she’s actually really sweet. She’s also really tormented, which is not a great way to be in Hawkins.

And while Jason hews closer to the stereotypical 80s jock, he’s not one-dimensional. We understand what drives him, even if we also understand how foolish he’s being. For one thing, he’s a kid dealing with circumstances he does not possibly understand. In addition, he’s part of a culture that was undergoing a moral hysteria. 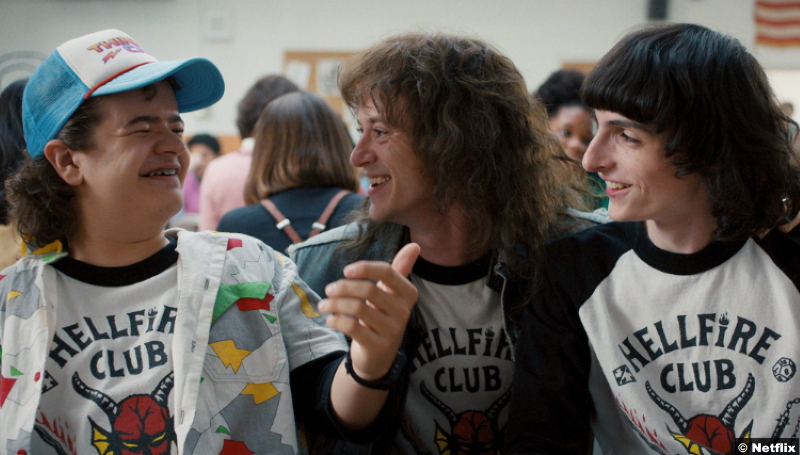 If you’re young, then you might not know about the Satanic Panic we had ourselves in the 80s. You see, in 1980, a Canadian psychiatrist wrote a book with one of his patients, whom he would later marry. The book purported to tell her recollections of Satanic ritual abuse, memories she’d only developed thanks to Dr. Love’s therapy. I’m not using their real names, by the way, because they deserve no more publicity.

Anyway, the book was part of a perfect storm that included other factors, like the increase in awareness of child abuse as well as mandatory reporting of such, that led to some of the most bonkers shit in modern history. I’m being a little glib here, because I have to, for my own mental health. This hysteria led to arrests and trials that ruined the lives of a lot of people, including the accused and the children who were led to believe that they had been horrifically abused. Many of the folks behind all this nonsense apparently honestly believed there were networks of Satanists across the globe who were perpetrating these crimes. (Nope.)

Anything could be linked to Satanism, especially if it were rad, like wearing black clothes or listening to loud, angry music. (Am I doing both right now? Who can tell?) One of the silliest links, though, was to Dungeons and Dragons. We’ve seen the kids on this show playing the game, of course. In fact, it was the precursor to Will’s abduction in season 1. This time, though, the kids are in high school, playing in an organized group (the Hellfire Club) and playing in the age of paranoia.

Hellfire’s DM, the wonderful Eddie Munson (Joseph Quinn), introduces us to this thread in our introduction to him. We meet him as he’s reading a magazine’s breathless description of DnD, which allegedly leads to anti-social behavior, like murder. When tragedy finds Hawkins again, who’s the more likely suspect for the townspeople–an interdimensional grief monster or the weirdo head of a group called Hellfire?

This then positions our kids as outsiders. They’ve always had to fight their battles against the Upside Down in secrecy, but this time, they’re having to do it under the glare of suspicion. However, this is just an exaggerated view of a certain kind of adolescence. Over in California, for instance, we see this kind of experience in Jane’s new life. She’s always had it tough, but high school is a special kind of difficult, especially if you don’t have your cool powers anymore. 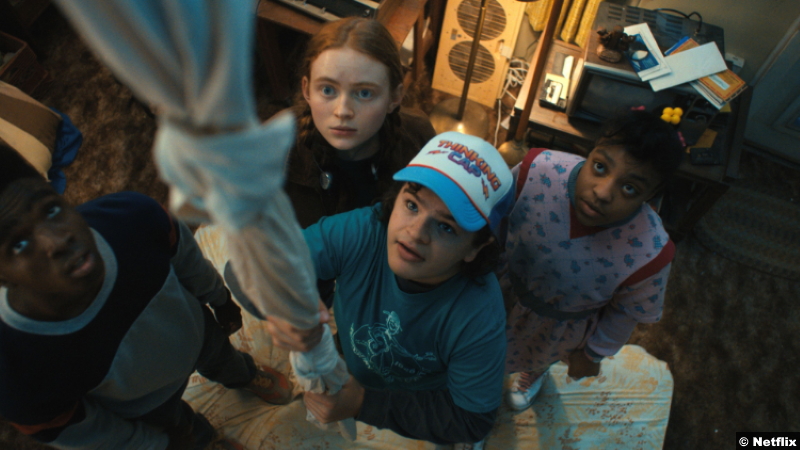 And this all plays out against a backdrop of flashbacks, showing us what life was like in the lab for baby Eleven. We already know it was terrible, but they show us something else awful that happened, which slots in neatly with the story they’ve told us so far. It’s a story that we know will cause guilt, which unfortunately is in ample supply for these characters. Despite the time that’s passed, Nancy, for example, still carries guilt over Barb. And Hopper, as we learn, has his own source of shame and guilt.

Negative emotions like these are irresistible to a grief monster, obviously. As such, this season’s demon has its pick of characters, any of whom are vulnerable to becoming prey. As it often does, though, the series shows us that some of the biggest threats aren’t supernatural at all. The real monsters are in our classrooms, our homes, and even in our own heads. If we’re lucky, though, we’ve got people who love us who can cut through the noise, who can save us, who can ground us when we’re floating. Because luck is all it is sometimes. Well, that and some bitchin’ powers.

9/10 – This part was so overstuffed, which some might find as a negative. For me, though, I liked it, even though it means that I didn’t have room here to go into detail about some other aspects, like Hopper’s whole thing or how Erica Sinclair continues to be a goshdang delight. This isn’t a perfect season so far–that overstuffing can lead to tonal whiplash and an occasionally dragging pace. However, it’s the closest to perfection since season 1. A particular highlight was episode 4, “Dear Billy,” which is probably the best episode of the series. Vecna, the season’s big bad, is the most human monster to date, and I’m very interested to see how that will affect the coming battle.

And we’ll find all that out next month, our final preparation for the actual final season, season 5.