Despite my interest in true crime, I can’t say that I’ve ever wanted to go to a convention for such. I really can’t see myself heading out to something the organizers describe as a “serial killer convention.” However, the phrase “Dr. Curdle, Jr. will be performing a simulated autopsy” might just get me there.

Hey, guess what we’re doing this week on Riverdale? Yep, the convention. And it’s been a minute since we last saw the show, so it’ll be exciting for me to remember exactly why we’re doing this. Hang on, it’ll come to me. It’s a…TBK thing? Sure, I think that’s it. 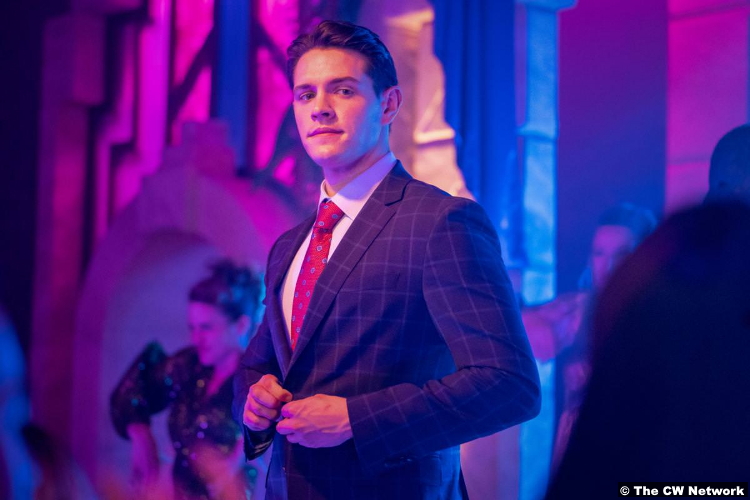 Wait, what does that small print say? Annual musical epis–WHAT. I can’t believe this. They take a break and then immediately come out of the gate with a musical episode? Didn’t we just have one of these? Now I gotta do it again? Boy, I tell you what, if I’m going to sit through one of these, then y’all had better–*tranquilizer darts*

Whoa, okay. Slaughtercon. Let’s get it. Before we start, though, I should explain. Not about my neutral to negative feelings about musicals, but about this musical. Yes, there is a musical version of American Psycho. I know this solely from my fandom of Jonathan Bailey, who appeared in the UK musical that I’m pretty sure starred not a single American. (It did have a Doctor Who, though!)

Beyond that, though, I know nothing about it. So this should be an enlightening experience for us all. I do love that before she names it, Veronica describes it as the “Holy Grail of serial killer musicals,” to which Charles asks, “Sweeney Todd“? I mean, he ain’t wrong. And now I kind of wish they’d do that one. But here we are. At Slaughtercon. [Note: In looking up the London production of the musical, I found out that Riverdale creator Roberto Aguirre-Sacasa wrote the book for it, hence the wild praise.]

Slaughtercon, by the way, will take place at Babylonium. If you think an upscale casino is a strange venue for a convention, especially this one, then you’re not alone. I agree. It’s not the musical part–Broadway performers host one of my favorite crime-related podcasts, after all. It’s the casino part.

Well, it’s this casino part. Babylonium has never been that highbrow–please see, for instance, its owner taking the stage to perform a cover of “Toxic.” However, it has always had a kind of vintage cool. I’m just saying that the vibe of the place doesn’t seem to fit with the reality of a grubby fan convention.

Hey, am I spending a lot of time not talking about the musical aspects of this musical episode? Yeah, maybe. But as I’ve said before, these aren’t the easiest episodes to discuss. Musical numbers don’t really move the plot forward, particularly if they’re from a completely different show. 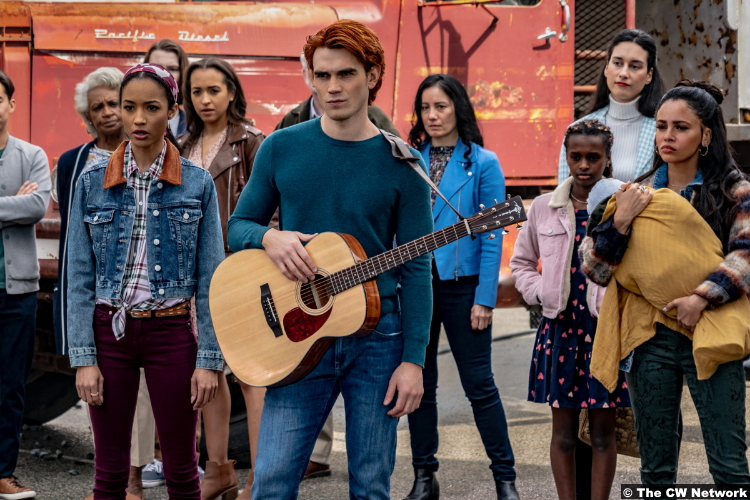 I’ll get to it. I’ll get to it! But before any song even breaks out, we get an update on the other stuff. Jughead is still in the Bunker That Hygiene Forgot. The strike is still on, and Archie informs the strikers that the union will be providing living expenses for them. Until that kicks in, though, Tabitha is offering free meals to the workers and their families. It’s a nice gesture that they immediately undercut with the next scene, which opens with Tabitha throwing back some popcorn, the brand of which is made very visible. (They’re not paying ME, so I’m not mentioning them.)

Also, it doesn’t work. While they’re eating at Pop’s, Percival just swans in and mind-pushes them back to work. Operating on the assumption that Percival can’t maintain mind-control over a crowd, Archie, Tabitha, Toni, and other workers’ families show up at the worksite. They then perform “Bread and Roses,” a song that is actually not from the American Psycho musical. It’s an older tune, a political one, and it’s effective.

Now back to the “80s glamfab” thing they’re doing at the casino. The songs are just whatever. Like, no shade to Duncan Sheik or the songs in general. I’m sure they work great in the actual musical. But I’ve got a problem with them here, which I’ll talk about later. We’re going to a convention.

Uhhhhh, it doesn’t work. I mean, they have a convention, but the whole point is to lure in TBK. He does a phone-in during Betty’s live talk, but that’s as close as they get. And then Betty sings a song. She has to do it, incidentally, because she ruined Kevin’s performance and he’s refusing to take the stage. She ruined it, mind you, because she thought TBK was about to attack Kevin. It was actually an in-costume and in-performance Dr. Curdle, Jr. Why am I not front row for that?

Finally, I’ve about had it with the ongoing “Betty’s darkness” thing. Ooh, what will she do next? Well, probably nothing. She’s made it this far without going on a killing spree, after all. Sure, she’s killed people, including TBK in this episode, but not out of a drive to do so. So let’s close the lid on this whole “mystery,” please.

6/10 – What a bore. I don’t know any other way to put it, sorry. You’d think a serial killer convention episode would be kind of fun, but the way everyone is split between storylines puts a stop to that. I did like the brief reference to Rivervale, and I hope we revisit that weirdness. Finally, though, a word about the musical episode. I have only one more of these to live through unless they do multiple ones in the final season. (I would not put it past them.) My aforementioned problem with them is that they use other people’s songs, and other people’s stories, which often don’t completely gel with this show’s storyline. If we’re going to do this musical shi…stuff, then it’d be cool if they’d do original songs. Something like Buffy‘s “Once More with Feeling,” for instance. Just a thought, among many.