You’re killing it, 2024.  You know, I’ve never been able to understand how a society can exist with so many contradictions and not collapse sooner than it did.

We begin with the crew getting free of the Confederacy in possibly the most obvious way – just taking advantage of stupid moments to disarm and then disintegrate their antagonists.  Interesting that Elnor wasn’t disintegrated – just shot in a way to allow him to die dramatically later.  Is that a setting on Confederacy phasers – the “die dramatically later” setting?  Must be the Confederacy’s version of “stun.”  It was sad to see Elnor die, and Raffi’s reaction to his death is genuinely moving – the anger, the grief, the rage – it all lands.

And then the ship does the Star Trek IV thing – slingshots around the sun at warp to go back in time.  I just went back and watched the time travel scene from IV and compared it to the time travel scene in this episode of Picard.  Aside from the lack of weird morphing clay heads and whale song, Picard nailed the tension and overall feel of that earlier scene with the increasing warp speed calls and then the weirdness of time travel with backward rain and tears going upward.  Nice job, show. 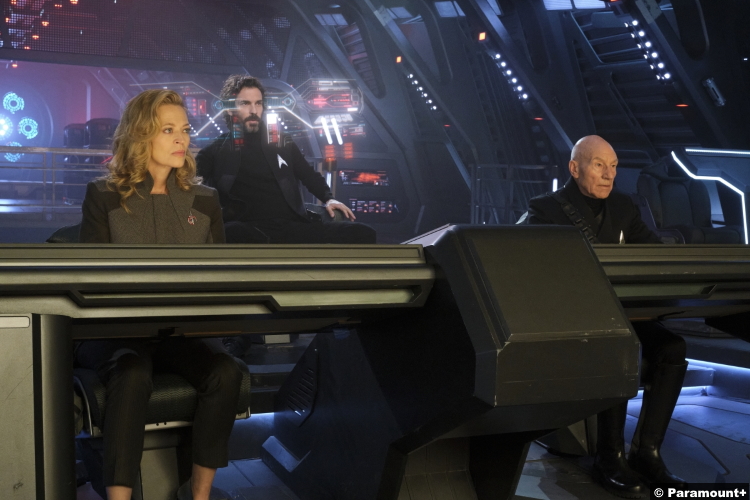 As the ship comes out of its time warp and approaches Earth, the chronometer is shot, so the crew has to figure out when they are.  Dr. Jurati mentions “fossil fuel pollution, early ozone deterioration, no radioactive fallout.”  We’ve arrived before the start of World War III, and the show makes sure we know that it’s still following Trek canon.  There are similarities here to the scene in First Contact when the Enterprise E follows the Borg Cube through the time rift.  There, Data says “from the radioactive isotopes in the atmosphere, I would estimate that we have arrived approximately 10 years after the third world war.”  Picard is clearly trying to be faithful to canon here and dole out some easter eggs, and I don’t hate it.

But there’s another time travel episode in Trek canon that this episode of Picard is 100% absolutely referencing here, and it’s from DS9: Past Tense, a two-parter from Season 3.  In that episode, a transporter beam error sends Sisko, Bashir, and Jadzia Dax to 2024 San Francisco.  I think Past Tense is going to be a very important reference point to this season of Picard.  Part of me wants to really analyze the 2024 displayed in Picard against the 2024 shown in Past Tense, but I think we need a few more episodes of Picard before we can really do that analysis.  For example, Raffi is mugged in a bleak homeless camp, and there’s a sign in the background that says “Sanctuary District,” (it’s kind of hard to see unless you’re looking for it) so that’s our first direct callback.

Back to Picard.  Our heroes must figure out what to do in 2024 Los Angeles.  First, they have to learn what the Borg Queen knows – where and when they can find this Watcher character.  The BQ is unconscious, and to fix that, Dr. Jurati has to hook herself up to the Borg Queen for reasons that don’t make a ton of sense, but Jurati’s battle to resist assimilation while connected to the BQ does make for good television.

Meanwhile, Seven, Raffi, and Rios beam over near the tallest building in LA, but somehow don’t end up together for reasons that don’t really make a ton of sense, but Rios materializing in mid-air and falling to the ground with a concussion does make for good television.  Rios ends up in a medical clinic that serves undocumented people, and his badge gets stolen by a little kid.  Rios tries to trade the badge for some cookies, and the kid is into it, but then the kid’s mother, who is the nurse who was tending Rios, takes the badge and stashes it up front for reasons that don’t make a ton of sense, but because of what happens next, the struggle to get Rios’s badge will likely make for good television. 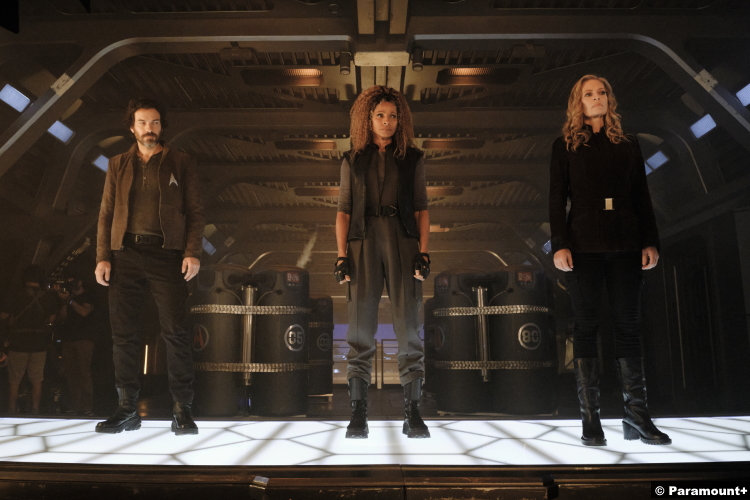 And now we get our second concrete reference to Past Tense.  When the clinic is raided by ICE, one of the officers asks Rios for ID, and he mentions a “UHC Card.”  This is the same “UHC Card” that the guards in 2024 San Francisco ask Sisko and Bashir for.  Gold star there, Picard.

Not much of consequence happens for the rest of the episode.  Seven and Raffi climb to the top of this tower and confront a dumb guard, Jurati steals the coordinates of the Watcher from the BQ, although she still needs the when of it all, and basically, we’re set dressing right now – preparing the pieces for the adventure to come.  The Los Angeles of 2024 looks a lot like our reality, with forest fires, pollution, war, and all of the stuff that leads to the Third World War in the Trek timeline.

Wouldn’t it be insane if Trek got it right?

Shake off that horrific thought, and let’s think about some very cool stuff that might happen this season.  Are Picard and crew in LA at the same time that Sisko, Bashir, and Jadzia Dax are in San Francisco?  Will we hear reference to the Bell Riots?  Will Sisko make an appearance??

What I love about this season so far is how it’s forced me to rewatch and analyze a bunch of prior Trek canon.  This episode alone made me rewatch the time travel scene from IV, the time travel scene from First Contact, and Past Tense from DS9.  The last episode made me rewatch Encounter at Farpoint and re-familiarize myself with Q.  This show clearly knows its Trek canon, even as it uses that canon to subvert the Trek formula and change it into something different and fundamentally darker.

Random thought. When Raffi talks about “how a society can exist with so many contradictions and not collapse sooner than it did,” she’s pretty much directly referencing Karl Marx.  Marx’s theory of dialectical materialism focused on capitalism’s contradictions – class struggle, overproduction vs scarcity, etcetera, and, per Marx, those contradictions are what will lead to capitalism’s downfall.  It makes some sense that Raffi would quote Marx here, and honestly, it made this red writer smile a little.

8/10 – Some of the choices in this episode made little sense: why Jurati had to hook herself up to the Borg Queen, why Raffi, Rios, and Seven were beamed to different places (and Rios was beamed into mid-air), why Elnor was hit with a “die later” ray instead of a disintegration beam.  But damn, overall, Picard is grabbing me hard this season. 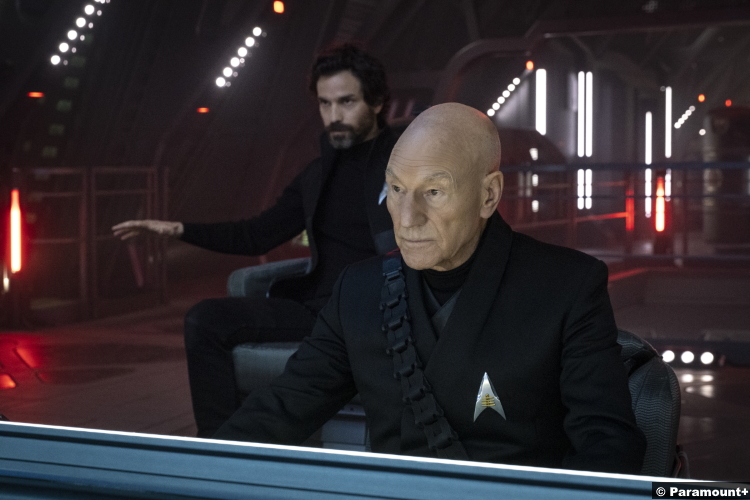