Star Trek: Prodigy is the franchise’s first foray into children’s animation in nearly half a century. The short-lived Star Trek: The Animated Series (TAS) ended in October 1974. Prodigy began in October 2021. Thankfully, animated entertainment has made significant technological and storytelling improvements since the mid-70s. 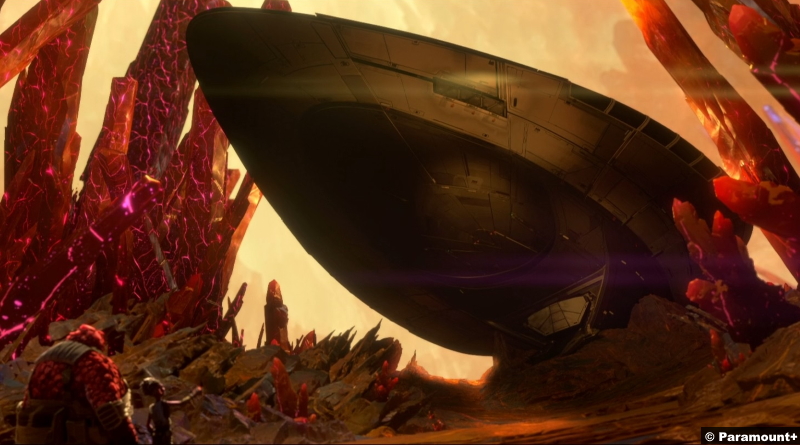 Unfortunately, some people believe cartoons are solely for kids, I won’t go deep into why this is a silly bias. I will only say contemporary cartoon creators make these shows for children and adult audiences. Nothing in Prodigy should dissuade a Trek fan from watching and enjoying this series. All told, the ten episodes total approx. 3 hours 40 minutes. The time investment is minor.

Season 1 focuses on the discovery of the USS Protostar, and escape from Tars Lamore, a penal mining colony. What’s more, a mystery clouds the Diviner’s (the baddie) interest in this Starfleet vessel. This first half-season delivers definitive answers to the plot’s intrigue. No cliffhangers, can you believe it? In the end, the show creates new problems with its resolution and leaves questions to push the end of Season 1’s conflicts forward.

A major strength of this show is its totally alien cast. A mix of familiar, deep cuts and new species makes for an exciting and unpredictable voyage. Time to meet…

The misfit “cadets” of the USS Protostar 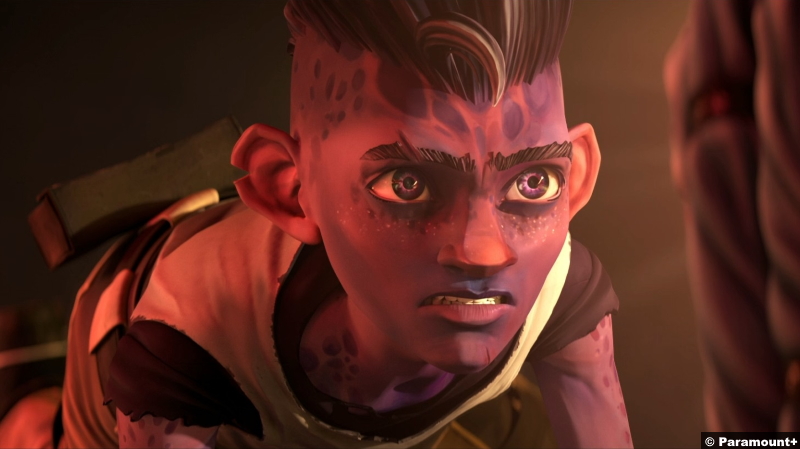 First, there’s Dal R’El, the co-protagonist of an unknown species. His tenacity is admirable, but his arrogance and egotism in early episodes grate against what one expects from a leader. Naturally, overcoming this flaw is an important piece of his character development, but it’s still aggravating. Expect a distinct turn in “Kobayashi” (S01E06). 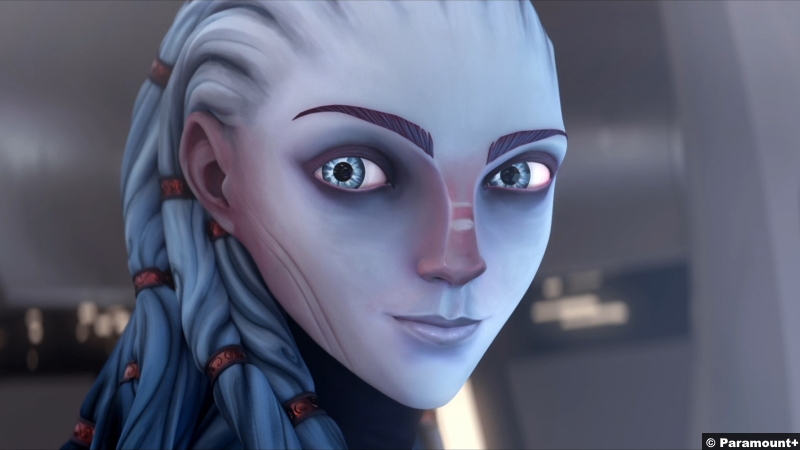 Secondly, we have Gwyndala who shares the spotlight with Dal as the series’ main protagonist. She is also a new species, Vau N’Akat. In fact, the Diviner, Gwen’s father and the season villain, claims they are the last of their species. So far, Gywn’s story arc takes more importance than any other character’s. Expect great twists for Gywn throughout the season. 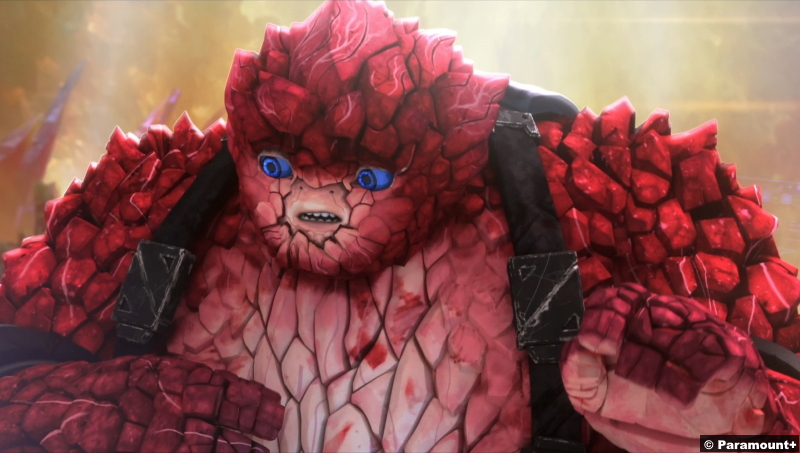 Third, we have Rok-Tahk. This Brikarian discovers the USS Protostar with Dal. Before Prodigy, the rock-skinned Brikar only appeared in “non-canon” Star Trek novels. Although Rok is pigeon-holed into a “Security” role because of her innate toughness, she spends the season breaking free of this stereotype. 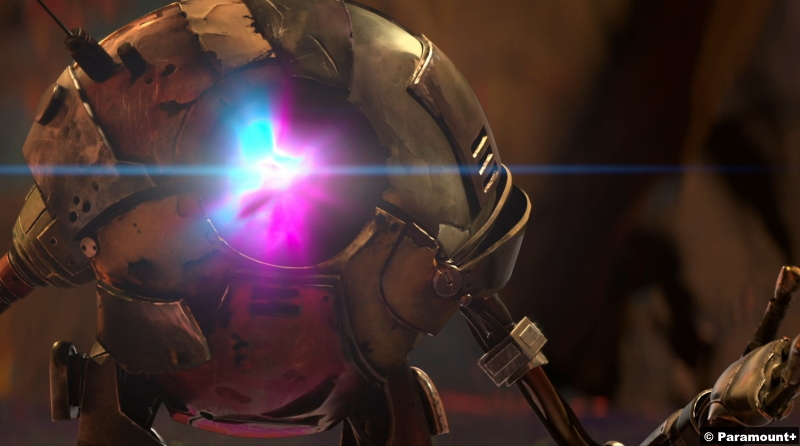 Next, is Fugitive Zero: the mastermind behind the crew’s escape. Zero is Medusan—a species I talked about in my recent Discovery article—an incorporeal alien wearing a self-made robotic containment suit. Uniquely, they have a dark background, which instigates their escape. 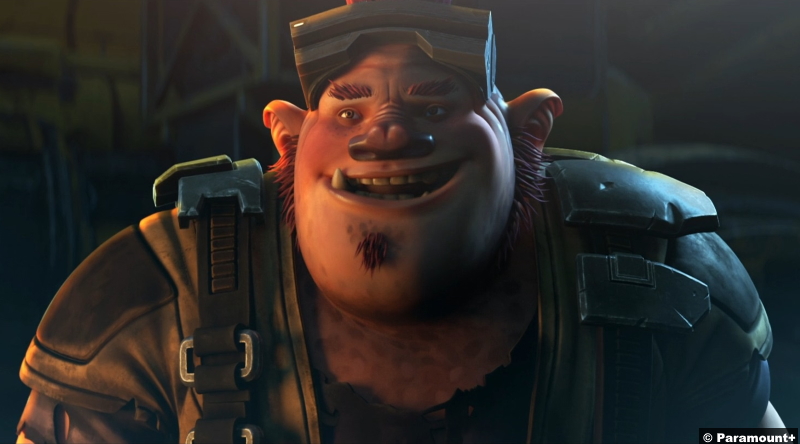 Then Jankom Pog, the most recognizable alien in the crew, joins the crew. He’s Tellerite, one of the founding members of the United Federation of Planets. As the loudmouth of the group—and a hairdo reminiscent of Star Trek: Voyager‘s resident blabbermouth, Neelix—he’s generally an affable fellow used for comedic relief. 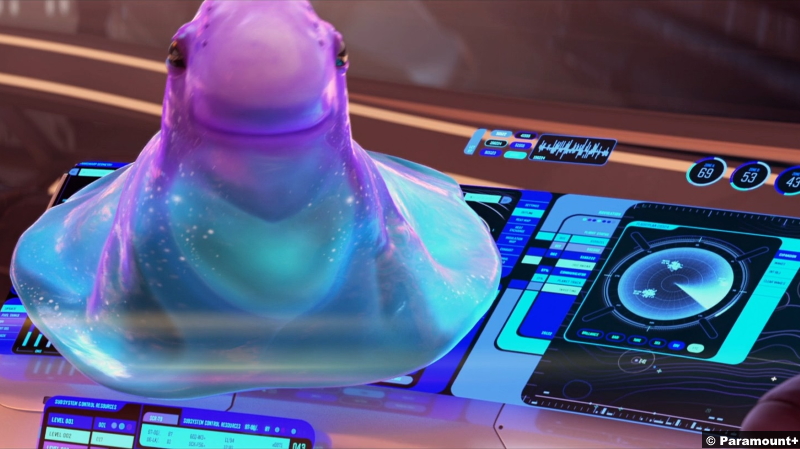 Finally, there’s “Murf”, an amorphous blob of unknown species. It’s relegated to pet status despite its clear intelligence. For most of the season, it exists mostly for the cute factor and comedic benefits.

With such a short runtime so far for Season 1, the villains take more cues from Star Trek movies than television series. Likewise, their motives are mysterious but ultimately reductive. A small disappointment, to be sure. Despite this failing, the main characters do not fall into the same simplicity. Nevertheless, the Diviner and Drednok, his artificial servant, do have a certain amount of blockbuster class. 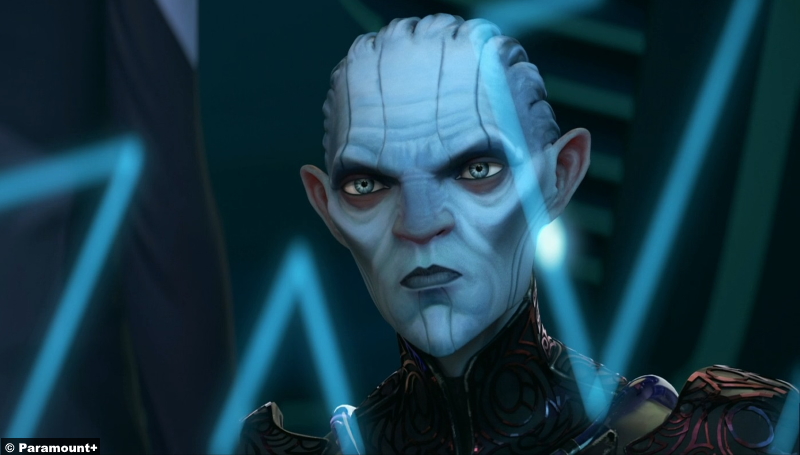 The Diviner is an old Vau N’Akat. His parental role with Gwendala sends real Sith Lord vibes. For example, he lives in a giant vat of fluids that keep him alive. Moreover, he later dons a special suit that provides his body with this unknown sustenance so he can survive. If that doesn’t hint at Lord Vader, I don’t know what would.

In addition, the Diviner trades chimerium for prisoners of different backgrounds, including children. He uses these slaves to mine more chimerium to get more slaves. To be honest, my harshest criticism is against this casual use of human trafficking. Child trafficking is a very serious real-world problem, and the show does not handle this issue with the seriousness it deserves. 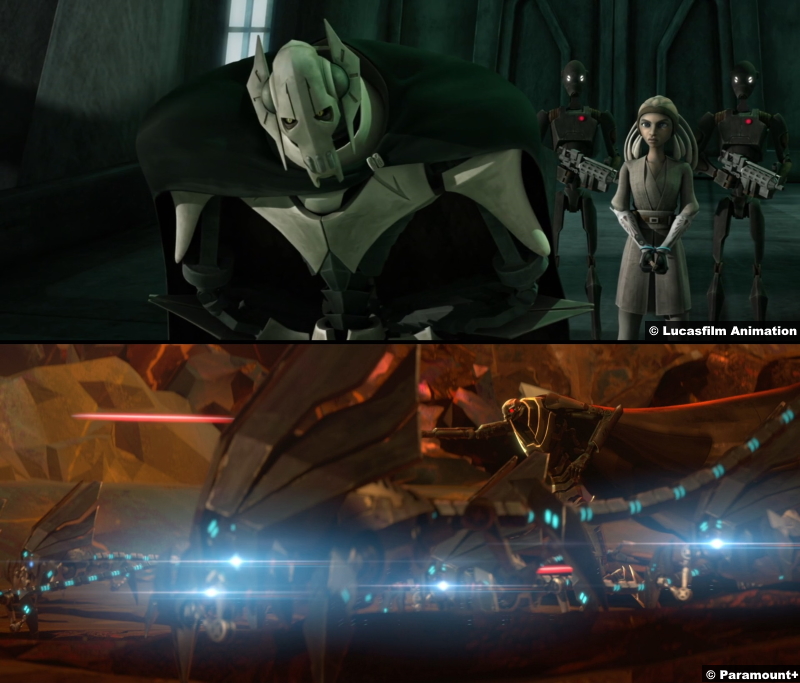 Long lost brothers? Or are they both wearing cloaks because they’re self-conscious about their robot legs?

The two-part pilot episode creates a thrilling cinematic atmosphere. However, while watching the opening episodes, I saw more similarities to Star Wars than Star Trek. The jailbreak echoes the first act of Return of the Jedi. In particular, it doesn’t help that Drednok looks a lot like General Grievous.

Yet this shouldn’t necessarily be considered a negative criticism. On the contrary, the action sequences are incredible spectacles, even if I prefer a more diplomatic approach. At any rate, once Holo Janeway comes online, the tone of the show decidedly shifts into pure Star Trek territory.

This isn’t our flesh-and-blood lady Janeway, but a hologram. However, for Voyager fans, we know just because a person is a hologram doesn’t mean they’re not “real”. 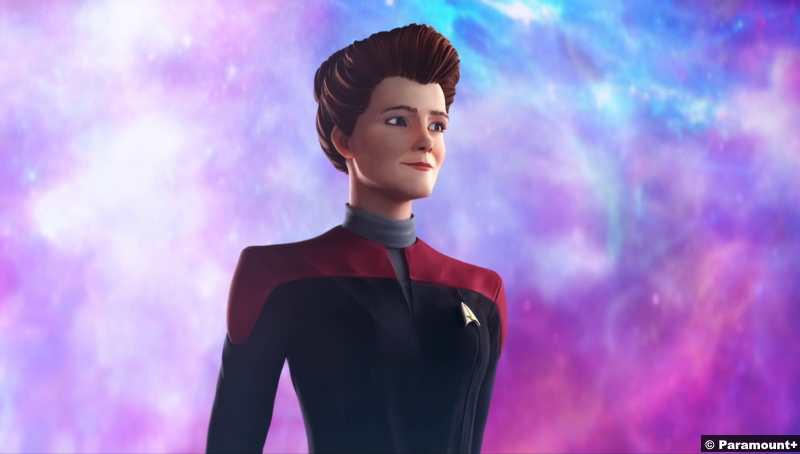 Holo Janeway is part of The USS Protostar’s onboard systems. Mystery envelops the Protostar’s experimental engine, and Holo Janeway plays an as-yet-undefined role in solving that puzzle. Her true role is a mentor to the kids who have discovered the Protostar and saved it from falling into enemy hands.

For fans of Voyager’s Captain Janeway, the lessons she imparts on the “cadets” are a joy to watch. It might be easy to forget this show will likely serve as many new fans’ entry to the franchise. With Janeway at the mentor’s helm, I have complete trust these new viewers will understand the values of the Federation and Starfleet.

What’s next for season 1?

Prodigy Season 1 will return this year with ten final episodes. Estimates place the release at the earliest Summer 2022. In addition, Prodigy has already been renewed for Season 2.

For most of the season, the timeline was unknown. The last episodes gave a definitive year: 2384. That means this show takes place six years after USS Voyager’s return. And notably, one year before the synthetic attack on Mars featured in Season 1 of Star Trek: Picard.

I like this timing. To explain, the show gives Janeway a good reason to be absent during the Mars attack in Picard Season 1. In Picard, her presence was ignored, as if she wouldn’t fight alongside Picard against the ban on synthetic life. I’m very glad the showrunners of Prodigy are fighting to protect Janeway’s legacy.

9/10 – The first half of Star Trek: Prodigy Season 1 is a true success, with only minor pitfalls. Episodes explore classic Star Trek conflicts in new and exciting ways. While the villain is a bit two-dimensional in his goals, the main cast isn’t in their conflict resolution. They truly are an intriguing and charming ensemble—new to Starfleet and Federation ideals—and it is fun to watch them grow together.