I can’t believe it’s over. “Babylon’s Ashes”, the final episode of the final season of The Expanse, has come and gone. Ty Franck (who writes the novels with Daniel Abraham under the pen name James S. A. Corey) considers the end of Bablyon’s Ashes to be a natural “pause point”. While we might hope for more, Amazon Studios has let their involvement come to an end.

This pause very well could be indefinite.

The Expanse finale centers on the final confrontation with the Free Navy. First comes the battles against the joint UN-Mars-Drummer fleet. While the navies duke it out, the Rocinante attempts to sneak into the Ring Space to neuter Medina Station’s comms and commandeer the rail guns. Of course, those plans go to pieces (would be no fun if it went perfectly), and the crew must make sacrifices. 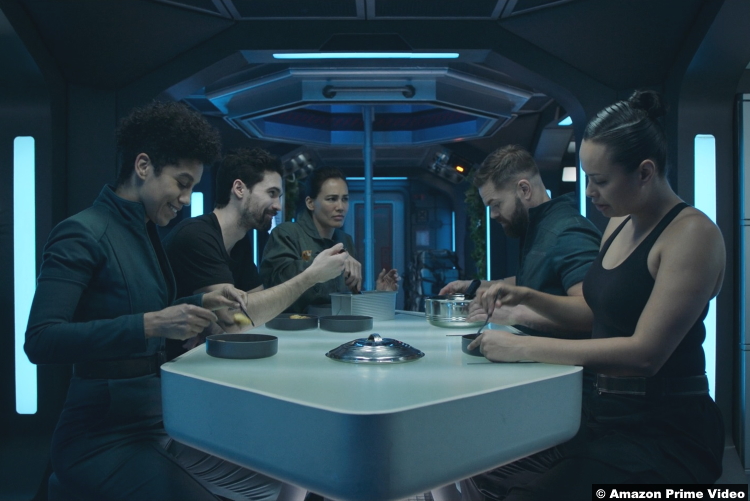 Before their attack, Naomi works to patch the bad blood between her and Clarissa. Peaches, for her part, cooks a “homemade” dinner to reunite the crew in one place. This scene of domestic peace is what they fight for, it’s what this show is all about. Connection. Helping one another. It’s a wonderful emotional swell of wellbeing before everything goes haywire.

The united fleet knows that the Free Navy flagship, Pella, hides in one of three Free Navy fleets heading towards Ring Space. The UN and Mars fleets take on the big groups, and they leave the small fleet to Drummer’s group. In short, they fall right into Marco’s trap. 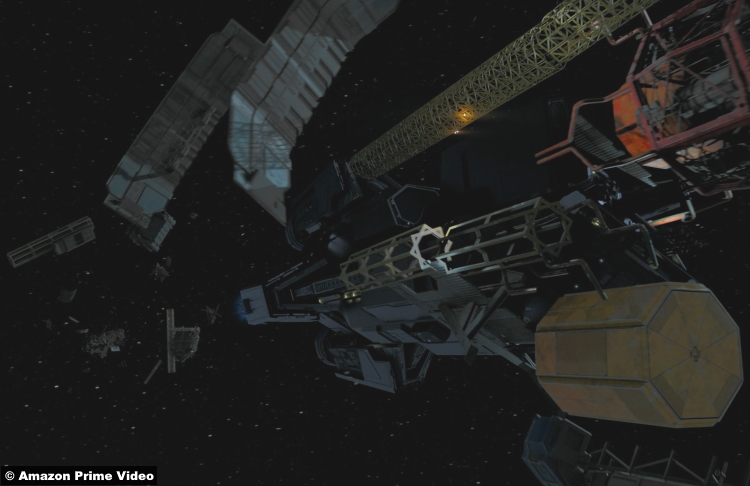 Turns out all that external work Filip and Tadeo were up to in the last two episodes wasn’t just repair work. They take a page from The Iliad and build a false carapace for the Pella. With the Pella in formation, the Free Navy disables Drummer’s fleet with ease. Drummer orders her one surviving bridge crew to suicide ram the Pella, but Walker beats her to it.

Walker’s suicide dive takes out an engine and bloodies the Pella, but does not stop Marco Inaros. The worst is the loss of Rosenfeld Guoliang, who dies in Filip’s arms. Rosenfeld’s death is the final catalyst for Filip. He understands the only person who truly matters to Marco Inaros is Marco Inaros. The demise of his 2nd in command is unfortunate because she would have been a good tool for his power. Filip’s fate is tied to his father’s, a psychological trap he allowed to close around him…

The crew of the Rocinante holds the larger fate of the solar system in their hands. They split into two groups, for one last mission. Naomi, Holden and Peaches take the Roci, and Bobbie and Amos join the dropship crew. It’s Do or Die. 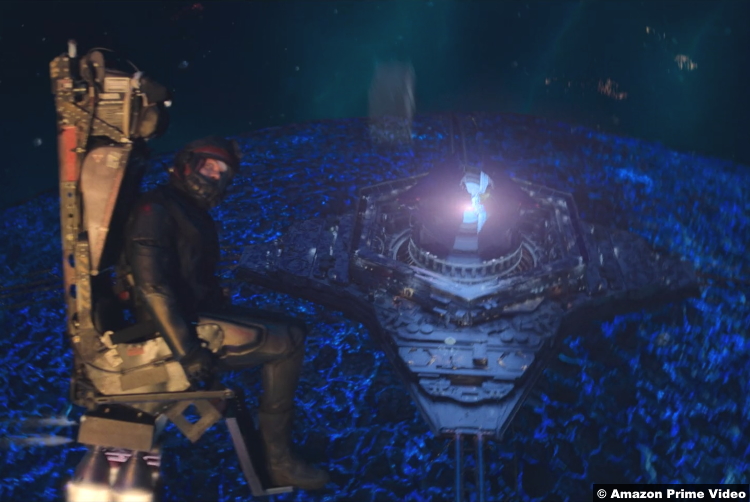 What a beauty of a shot, eh?

The action-packed climax to this episode is a visual splendor. The cargo containers drop like M&M’s into the mouth of the Ring. Daunting rail gun mounts swivel and fire with sublime beauty. Bobbie’s HUD overlay adds to the claustrophobic atmosphere of the final firefight, the viewers feeling as pinned and helpless as the characters. 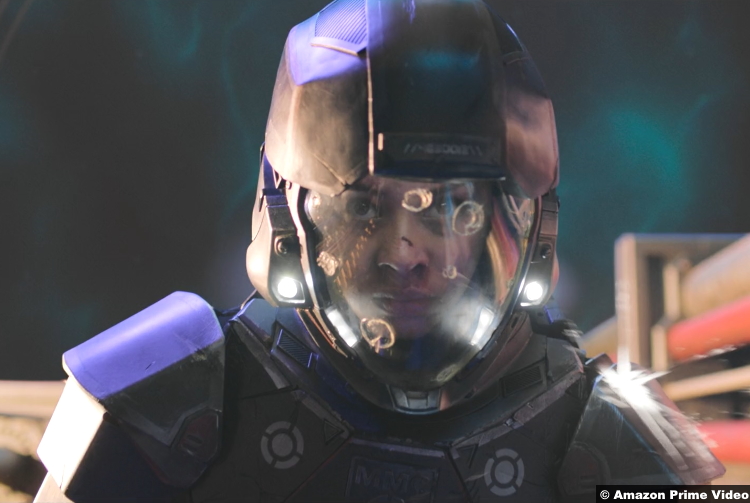 Frankie Adams encapsulates the mentality of sacrificial necessity that makes Bobbie Draper’s character so compelling. Her final charge to blow the rail gun reactors saves Amos and the Rocinante, but leaves the door open to Marco’s fleet.

As the crew debates their options, Naomi proposes to use the Ring Entities against the Free Navy fleet. Since it’s her idea on how to kill her son, everyone is on board. My only criticism in this episode is the lack of certain elements from the novel that make this blow to Marco so much sweeter. Notwithstanding, the presence of Filip (he’s not on the Pella in the novel) create an emotionally heavy situation that would have made the novel’s gambit awkward here.

Instead, Naomi Nagata grieves in their victory over the Free Navy. Dominique Tipper is a powerhouse to The Expanse, and her final performance attests to this. She ends the show delivering wise and heartfelt advice: “It’s more important to try to help people than to know that you did.”

However, Filip escaped. He followed another piece of his sage mother’s advice from Season 5, Episode 7 “Oyedeng”:

Walking away is the only choice anyone ever has.

The entire epilogue to “Babylon’s Ashes” is not adapted from scenes in the novels, but is original material. To see a political conference end the episode very much pleased the science fiction nerd in me. Hope, truth and reconciliation are the motors that drive James Holden from the very beginning. Holden’s presence at the talks elevates his position from a simple ship’s captain to one who wishes to balance the powers of the solar system. 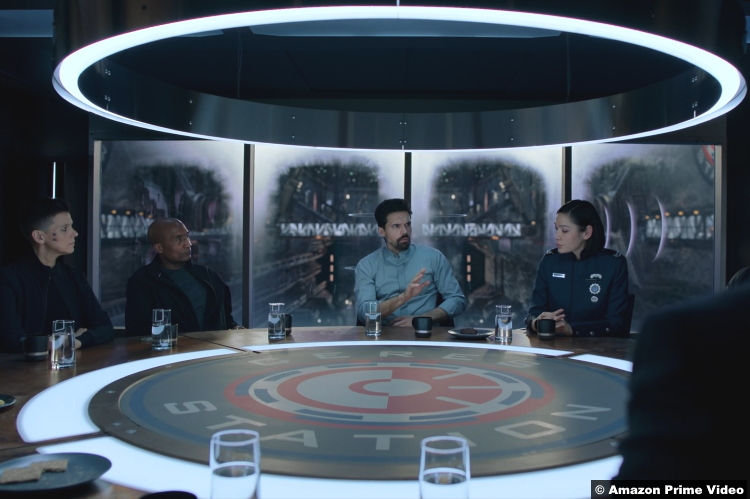 And so they offer him the job: Transport Union President. I let out a huge long belly laugh during this shot. Earth and Mars pin Holden down to make him become what he despises the most: a figure of authority. The hilarity of the situation was a great bluff. I believed the feint. Seemed like an appropriate launching point for Holden’s character development, but… 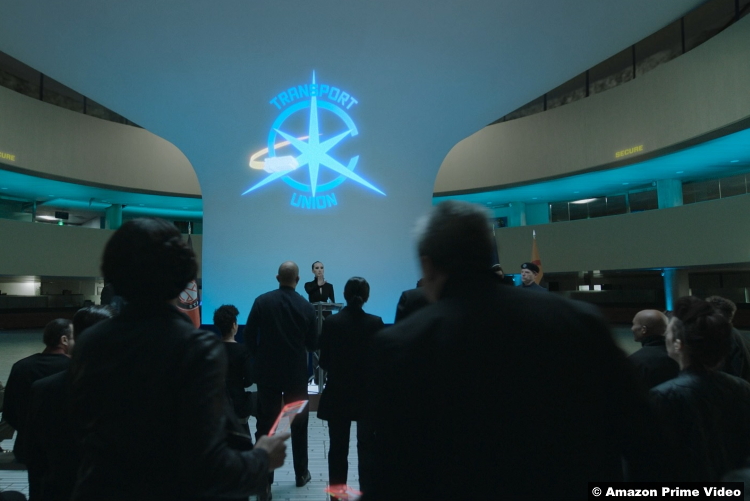 All my bitching about last week’s episode’s lack of the Consolidated Fleet and Drummer’s role as its head was to build to this point. Now, with the introduction of the Transport Union, I see how creating the Consolidated Fleet—even if it had been when Drummer and Walker first joined up—would have been confusing for non-book viewers. Why introduce two Belter institutions in the same limited series season finale?

Anyway, this scene where Holden hands off the Belter’s future to Drummer makes up for my prior complaints. That Holden would go off-script is as expected as ice melting in the summer sun. But the presidential resignation took me by surprise. I am glad to see Drummer as President, though I’m a bit perplexed. In the books, she’s the fifth president, and that’s thirty years after the war against the Free Navy.

Which leads us to…

As you likely already know, the Expanse novels don’t end with Babylon’s Ashes. The book series continues with a final trilogy: Persepolis Rising, Tiamat’s Wrath, and Leviathan Falls (Buy The Expanse books here: UK / USA / Canada). Camina Drummer’s presidency isn’t the only significant departure (Clarissa’s life expectancy comes to mind), but it’s quite telling about where the series could go next, if it’s picked up again in the future. 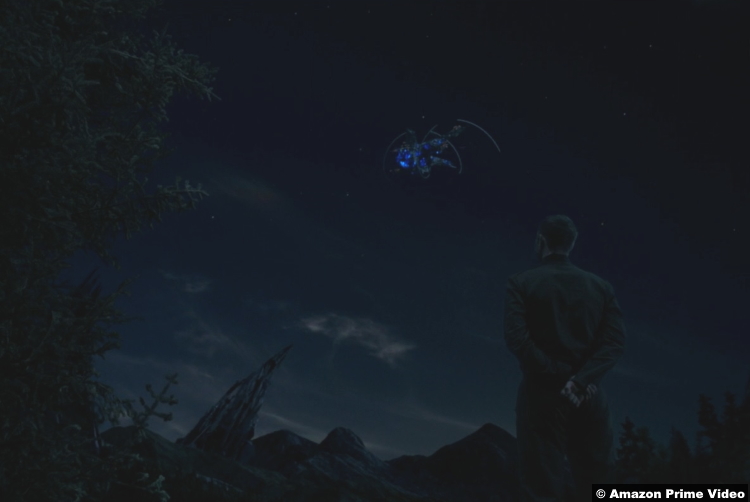 “Oh, the beautiful alien spaceships we will create, my orbital love” –Duarte (not an actual quote).

Without great surprise, Winston Duarte and Laconia are central to the conflict of the final trilogy. As seen throughout the season, Laconia is keen to develop technology based on the protomolecule. 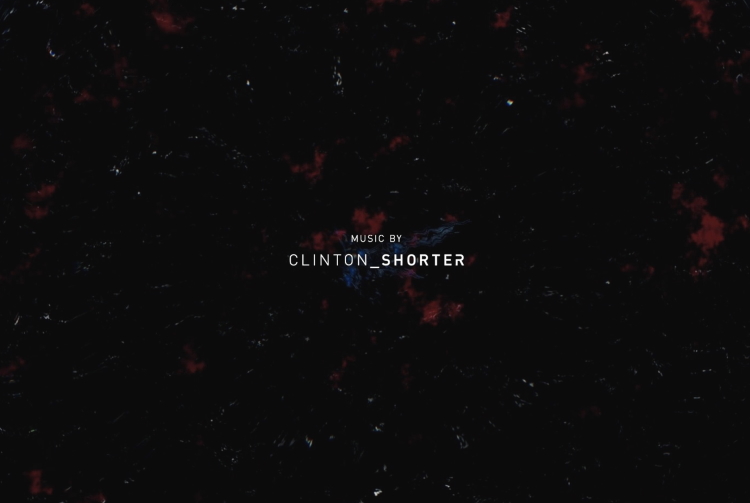 The final images of the series…

And the protomolecule killers the Rocinante Crew call “The Ring Entities” have eyes on Laconia’s development. The finale sets up the agents. An Earth-Mars-Belt alliance, protomolecule-lovin’ Laconia, and the Ring Entities. Naturally, each of these agents—except the mysterious Ring Entities, for now—compose multiple bodies, which could make for high-conflict scenarios.

But all that is speculation. Who knows what’s in store for The Expanse in the future? Maybe nothing. Even if that is the case, this series will hold its position as one of the best science fiction TV series for a long time to come. 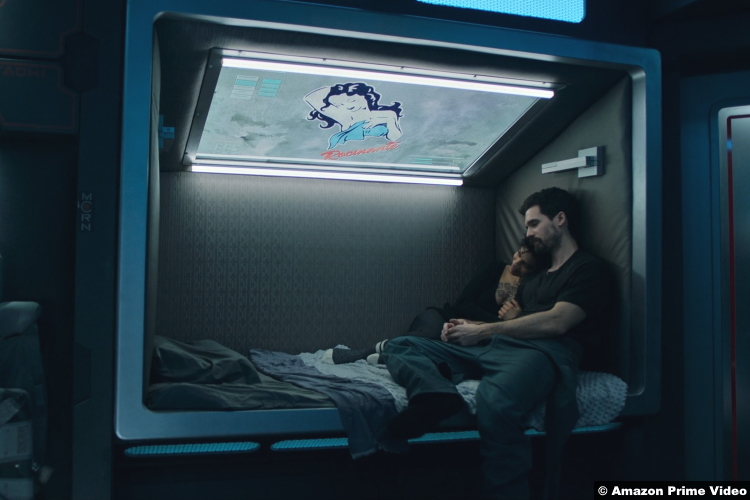 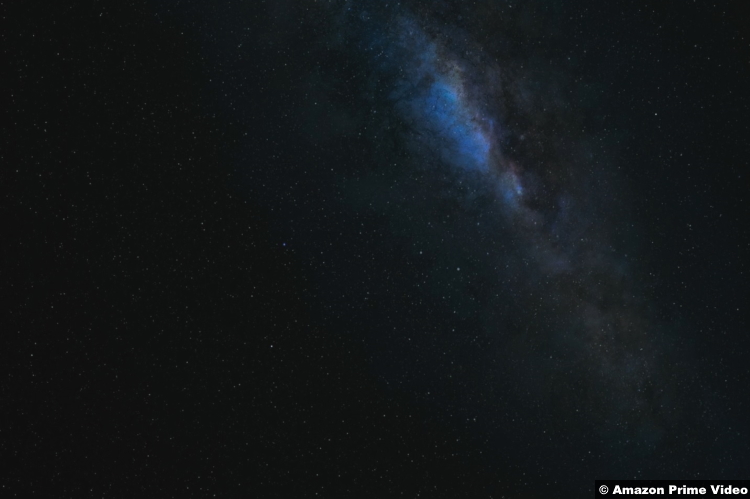 The Rocinante. One point of light in The Expanse of space.

10/10 – Acting, action, politics, this episode has it all. The crew of the Rocinante finds its unity. The actors electrify each scene with their presence. Final resolutions go beyond their uniting in battle and forge forward in post-war peace. Though the series is tentatively over, the show has left pieces for continuation should the best of scenarios arise to give up new episodes of the best science fiction show on television.