Season 6 of The Expanse is halfway through its final run. Episode 3 “Projecting Force” is all about Marco. With the joint UN-Mars fleet inbound to Ceres, Marco Inaros runs. In his wake, the spooked UN-Mars force understand he’s operating a scorched-earth policy. Avasarala is left with managing the humanitarian crisis Marco and the Free Navy created. Filip feels they’ve betrayed the Belt, but as usual, his father flips his manipulation around. In a startling turn of events, the fleeing Marco crosses paths with the Rocinante…

Eleswhere in the outer solar system, Drummer gains Walker’s allies in her space heist to steal from the Free Navy’s hidden supply lines. Rosenfeld Guoliang describes how dire their fight against the approaching UN-Mars fleet will be to take the supplies from their caches. Marco brushes her off. I’m assuming this will be the main content for next week’s episode. Other than that, Michio defends Earth in their suffering, which gives me hope for this character beyond her reduced, meek role.

A pleasant surprise in this episode are two cameos from characters last seen in Season 3: Praxideke Meng and Dr. Annushka “Pastor Anna” Volovodov. Prax appears in a personal video message to Amos. He hands over agricultural research that could help save Earth. His flourish of scientific jargon delivers a delightful moment between Amos and Bobbie. Pastor Anna appears briefly in Monica’s propaganda-not-propaganda video journalism (which triggers Michio’s outburst). 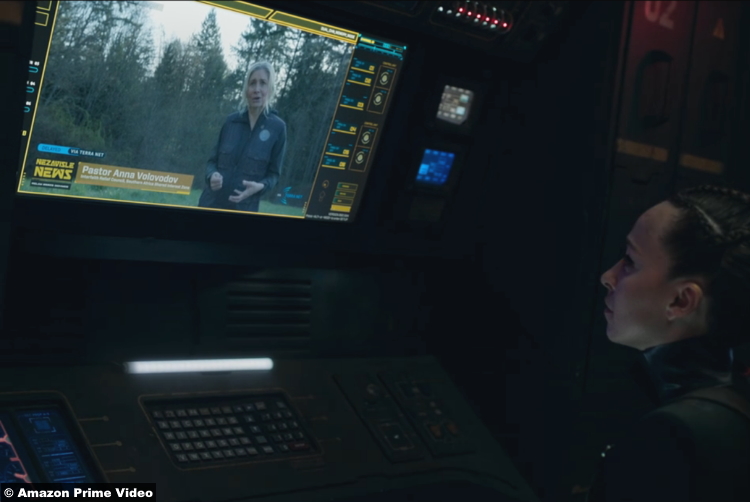 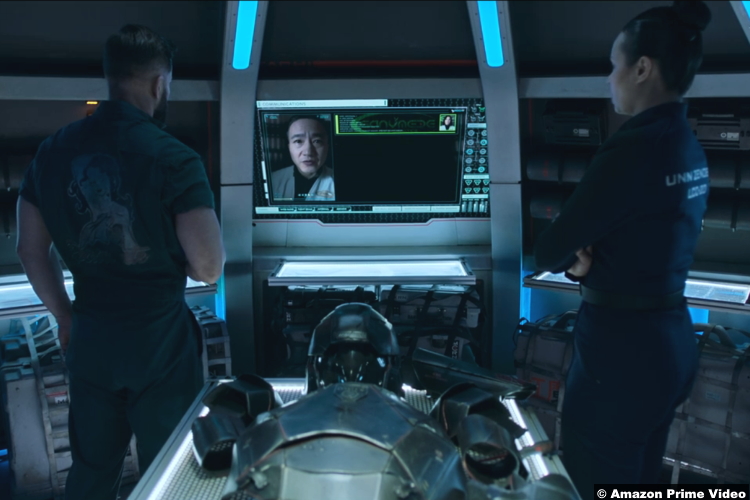 Avasarala and Monica work together in their own (dys)functional way to help Ceres. Shohreh Aghdashloo, who plays “Chrissy” Avasarala, lifts every actor she shares scenes with. And all their work orbits around what Marco Inaros has done. He’s quite pleased to be the center of the universe, but it seems few others are content with this status quo…

“This is your fault.”

The most important character development this week occurs on the Pella, the Free Navy flagship. Last week, Rosenfeld was nurturing their father-son conflict, and it comes to a head in this episode.

Keon Alexander is incredible. I hated Marco in the books. Not only is he a vile character, but I also couldn’t get my head around how anyone could fall for his schtick. Keon Alexander makes me believe. His performance as the narcissistic dictator of the Free Navy still foams with internal contradictions, leaving no doubt Marco thinks of himself as an example of perfection. But the situational nuances Keon Alexander pulls off show just how such a person could rile up support. 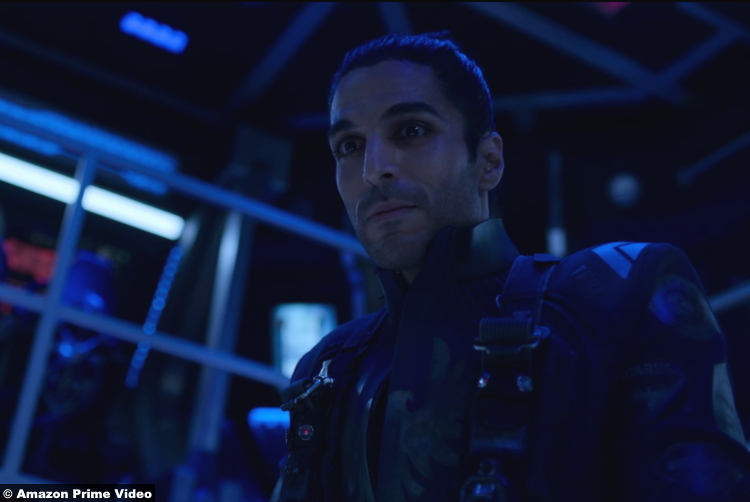 Filip sees through his father—just like Rosenfeld does. By catering to his sensitive side, Rosenfeld’s influence bolsters his courage to confront Marco. First, Filip questions his father’s heartless decision to leave Ceres to the inner dogs. Marco delivers a rousing speech—they’re not like us—but the scene ends on Filip’s dubious look as his father embraces him. 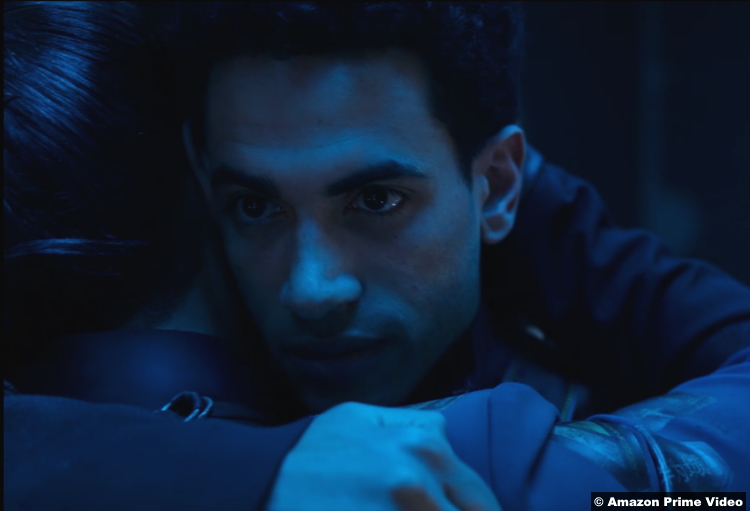 Marco leaps at the chance to destroy the Rocinante. Rosenfeld cautions against the unnecessary risk, but Marco can’t see past his revenge, the publicity of destroying James Holden in a three-on-one battle. To his credit, Filip does everything Marco orders during their attack without pause, even though the possibility of killing Naomi visibly shakes him. The action sequence is so much fun, especially seeing Bobbie save the day with smart thinking, which Rosenfeld admits to Marco.

Filip’s next outburst is the real strike. When Marco tries to blame everyone else for the failure, Filip slaps his father with the blame. What Filip says would net other Belters an execution. Rosenfeld looks on from the deck, in silent agreement. A good way to destabilize confidence in a leader, no?

The beginning of this episode starts with the UN-Mars navy arriving at Ceres. “Azure Dragon” was resolved with the discovery of the asteroid attack network. An undetermined, but considerable amount of time passed. UN-Mars had to destroy all the camouflaged rocks, as the Free Navy stripped Ceres of all but three weeks of viable survival resources. I understand even giving lip service to the passage of time is valuable airtime spent covering events that aren’t necessarily so interesting. However, I worry this may be destabilizing for viewers.

Since the beginning of the series, The Expanse has been fast-paced with little downtime between season episodes. This season’s time jumps allow the show’s thrilling pace to remain intact, without following one event closely with the next. To me, season 6 does not feel forced forward. As a counterpoint to the time jumps, the writers keep this episode focused on the most turbulent moments of internal character conflict. In addition to being a masterful display of dissonance in storytelling, I think there’s another point to this: Laconia.

Clues to The Expanse post-season 6

The “Strange Dogs” novella storyline continues apace. After the Strange little doggie took mama not-bird last week, it returns from the dead. And it has apparently fixed the drone the little girl broke, adding some funky new blue parts. Then, ecstatic, she returns, only to find her brother has died from some accident. (If you can’t see where this is going next, you’re really in for a treat.) 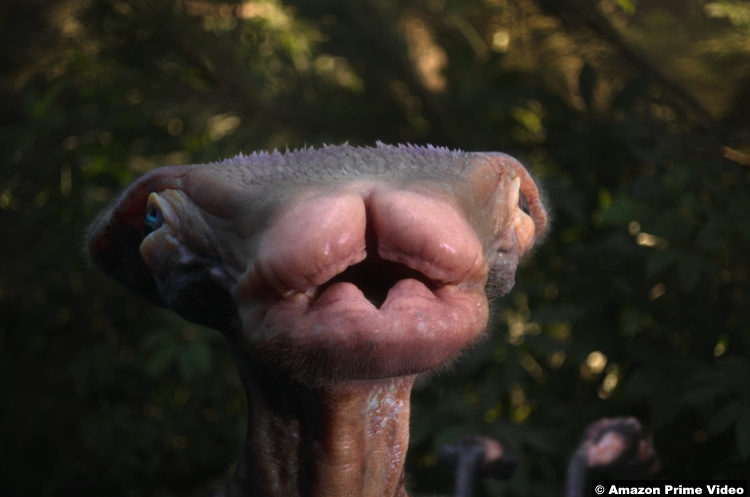 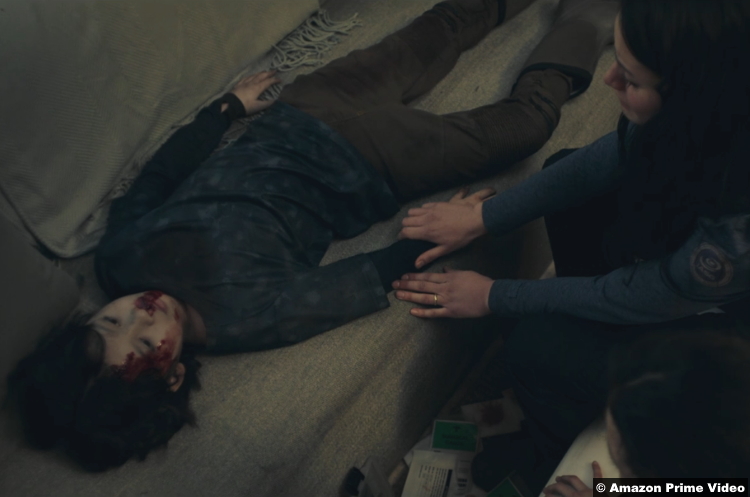 I think the culmination of this storyline will serve to introduce the even larger time jump between Expanse novels 6 and 7. For those who don’t know, after Babylon’s Ashes, about 30 years pass before Persepolis Rising begins. As Ty Franck—one of the novelists and series regular screenwriters—mentioned, the end of season 6 is a “natural pause point” for the show. It’s not hard to imagine a sci-fi franchise being relaunched years later. I like to think of the mini-jumps in Season 6 as primers for the 30-year jump.

That’s some bold speculation, I’ll admit. But if anything, the showrunners have proven again and again they can prepare a cogent narrative despite behind-the-scenes production difficulties.

9/10 – Keon Alexander’s performance steals the show in this episode. The episode crafts an artful balance in layering this huge cast of characters and several intertwined plot lines. Events—from the Ceres humanitarian crisis to the badass space battle between Pella and Rocinante—feel pressing and intimate. This is The Expanse James S. A. Corey promised in October. 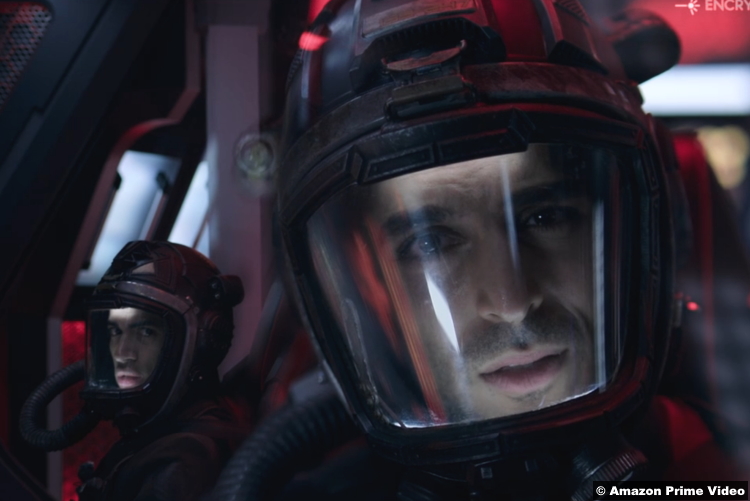