The final season of The Expanse continues this week with a détente. Every storyline except Drummer’s deals with the damage incurred in last week’s episode (Projecting Force episode review). Clarissa discovers Holden’s disarm command and tells Amos. Marco Inaros orders Filip belowdecks to the Pella’s repair team. Monica presents her press work about the Ceres sabotage to Avasarala. The only plotline with any action is Drummer’s. She takes her crew in to raid one of Marco’s supply depots. Despite taking a mere eight minutes of screen time, the episode takes its name “Redoubt” from Drummer’s section. (At least, I think so. Not sure what else it could be.) 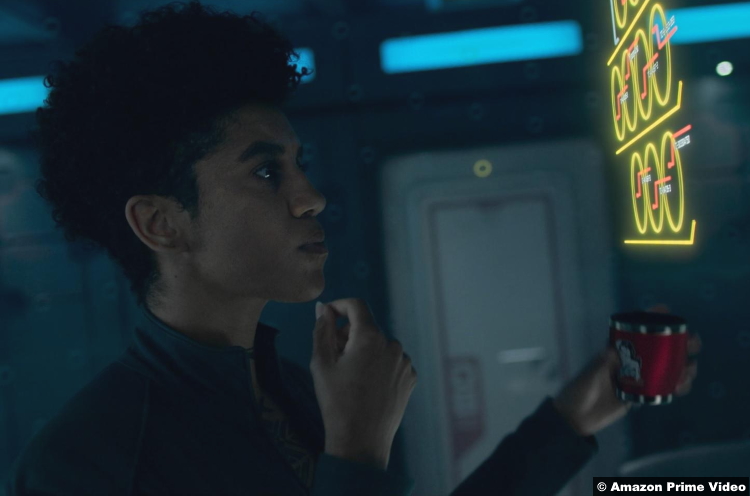 A détente doesn’t have to be boring, and this episode is an exercise in how to maximize slow scenes for efficacy. Amos and Bobbie sing Hank Williams as they commiserate over the torpedo failure (dare I say a series highlight?). Clarissa and Holden sit quietly in the mess hall after a heart-to-heart. Tadeo, Filip’s repair tech “boss”, pulls a prank on Filip, and shares his family history. Marco and Rosenfeld share a drink.

All of these human moments presage the calamity that is about to unfold near the Ring. Like Monica’s report, the show wants to reinforce the humanity of its characters. This has a two-fold benefit: more viewer investment and a stage for this show’s wonderful writers and actors.

In the previous episode, Holden decided he could not kill Naomi’s son, Filip. When the crew finds out (except Bobbie), everyone (except Clarissa) is mad about his decision. Wes Chatham embodied Amos Burton’s ever-present threat of violence, seeing this behavior towards Holden had me half-worried about an altercation. With Amos going a bit off the rails this season—and Chatham’s intense dedication to the character—you never know what they might change. Holden talks him down, and Amos leaves, disgruntled.

At first, I didn’t quite understand why Holden doesn’t mention Filip, but a one-on-one scene with Naomi and Holden quickly follows. She’s upset with him for making choices on her behalf, but Holden says it was his choice. He can’t live with being the person who killed her son. Naomi seems to accept this uncharacteristic selfishness.

In the books, just like the series, Holden is the quintessential self-sacrificing hero. Steven Strait, who plays Holden, is somewhat cursed in that regard. His character is the only crew member without much of a shoddy past to deepen the character’s development. Strait’s performance in this episode clarifies what is important to Holden: his relationship with Naomi. Since the start of the show, Dominique Tipper’s Naomi has always pulled the best performances out of Strait. I would qualify this episode as one of Strait’s acting peaks in the series. 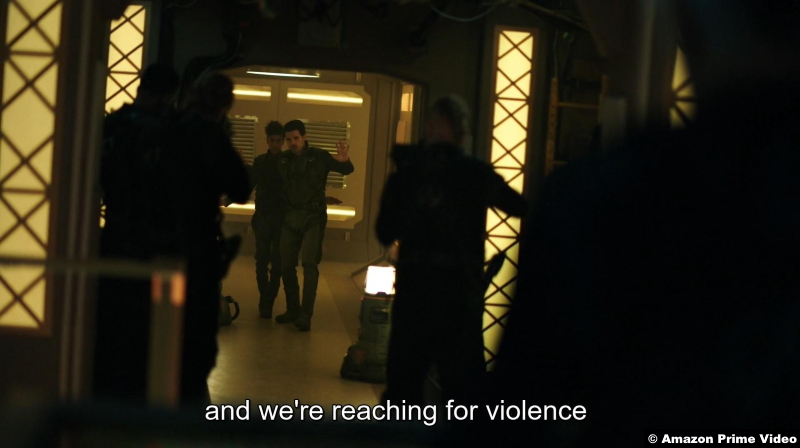 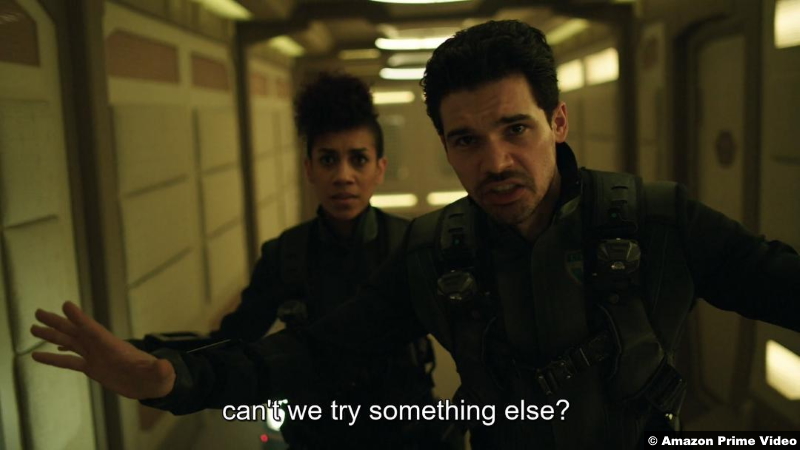 From Season 3’s finale, when Clarissa turns on Ashford to help Holden.

The close of the Rocinante’s storyline in this episode comes from Clarissa. She lets Holden know she discovered the disarm order. Then, she harks back to Season 3, the moment she realized she didn’t want to kill him anymore. She doesn’t think Holden’s idealism should die, and tells him “Don’t ever feel bad about not killing someone.” We’ll see how this “not killing someone” pans out, I suppose.

Dan Nowak, wow, thanks for writing that dialogue for Cara Gee. I actually cheered out loud, in real life. The Tynan cast makes eight minutes of screen time feel like half the episode.

Drummer and her new ally Walker raid the supply depot. Bad luck! Turns out Marco posted Free Navy guards there. The action sequence is chaotic; it’s hard to follow who’s in which spacesuit. For a moment I thought Walker turned on them, but nothing of the sort happens. Walker loses a man, and Drummer’s new right-hand man—Josep—loses his right arm. 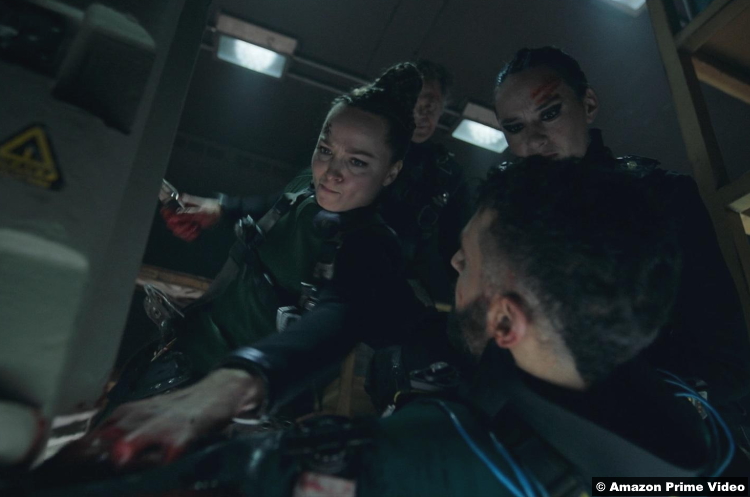 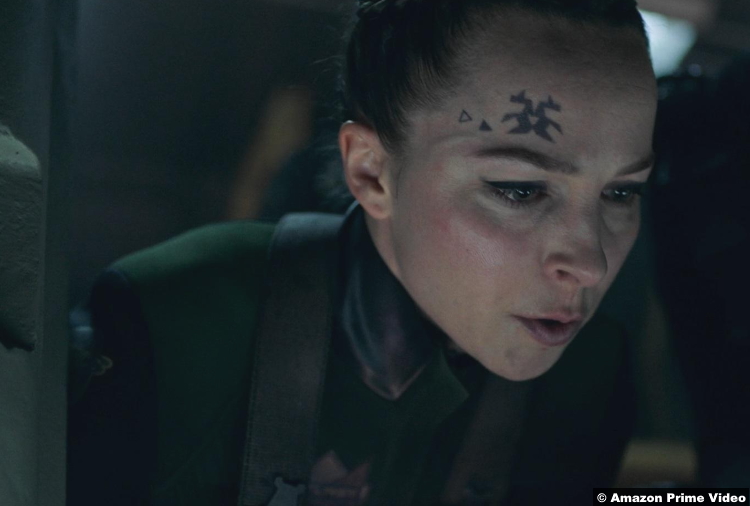 Finally, Vanessa Smythe shows how much of a badass her character Michio Pa is. Once she hears Josep is pinned, she maneuvers the Tynan into the spinning supply store and rushes to the scene. As the only qualified field medic around, she realizes applying a tourniquet won’t be enough. She amputates Josep’s arm, a gory and gross mess. Smythe plays Michio with the tenderness she’s had since the start but leaves indecision behind in the heat of the moment. Even the old Golden Bough pirate Walker is in awe.

Drummer’s brutal address to Marco Inaros is the icing on the cake. Just give me the icing tin! More Cara Gee, for the love of all that is The Expanse!

I exaggerate. Incredible performances permeate this episode. Even a new background character, Tadeo played by Joe Perry, shines. Pairing Filip with the repair technician is a superb narrative decision. Instead of wallowing in his punishment, Filip sees the reality of Belter life. Consequently, Filip begins to understand how privileged he is as Marco’s son—and what living without that privilege is like. 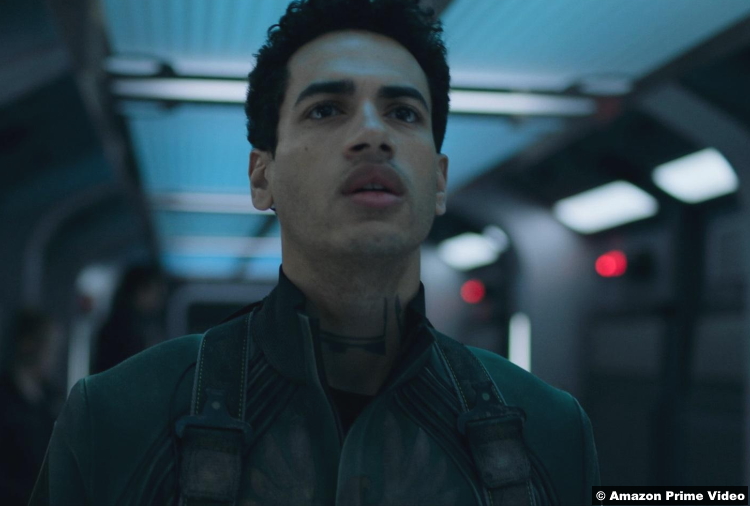 This smack with reality combined with Drummer’s supply theft forces Filip to fold into the sunken cost fallacy of his soul. In the moment, he reacts with the dogmatic fervor of his father but is visibly shaken by these lies in the final seconds of the episode.

Thank Rosenfeld, I’d say. She has been stirring shit since the beginning of the season between Marco and Filip, and in this episode, she finally reveals why. She wants the governorship of Medina. However, to obtain this station, she further destabilizes Marco and Filip’s relationship. She feeds them lies they want to hear. Lies that force them to be together to show how unsuited Marco is to lead the Free Navy. If Filip or Marco win, she wins. I’m interested to see how far Rosenfeld’s Xanatos Gambit plays out.

Medina and the Rings are the end goal. Naomi continues to work on the disappearance problem. The Free Navy is on its way to Medina. Mars is sending out their navy to attack Marco without UN support. Camina Drummer and her allies are out there in the reaches, waiting like spiders on a web. Meanwhile, Laconia has already made the transit. 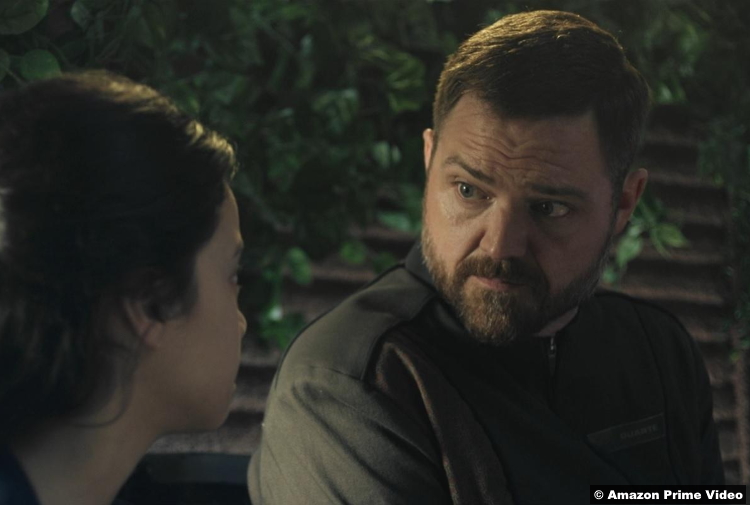 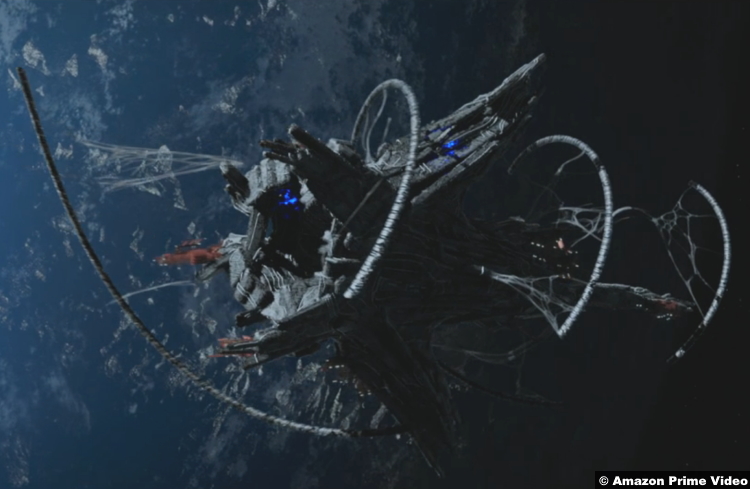 The biggest surprise of this episode, for me, was Winston Duarte. I should have expected Dylan Taylor to play him as a likeable villain—I have read the books, after all. While Taylor’s performance has no faults, his dialogue was a poorly veiled info-dump. (In the novella, he doesn’t talk like that during its parallel scene). At least we see what’s really important to Duarte: the protomolecule space dock, not his Laconian subjects.

7/10 – Excellent performances throughout this slower-paced episode. The writers have used these moments to deliver tons of plot-important information, which comes off awkward in some places. However, every piece of dialogue is vital before what’s likely to be an action bonanza in the final two episodes. 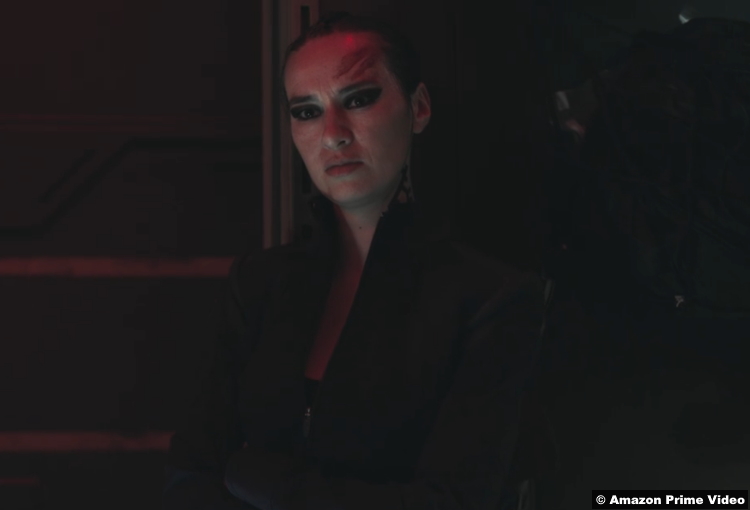