REVIEW: SPIDER-MAN: NO WAY HOME is the hero’s best film yet

I have no idea how I’m going to talk about this movie without spoilers.

I’m not even going to try…

No Way Home brought emotions out of me for characters I didn’t know I could feel for. It brought closure to characters I didn’t know needed it. More than anything else it promised to be a big, unique spectacle of a movie and not only did it absolutely deliver, but it did so much more, too. Despite having so many moving parts and pieces literally flying all over the screen for the final act, somehow it all managed to remain cohesive and clear, not only in terms of who was who (hard enough when you’re dealing with a bunch of masked heroes, and triply hard when those masked heroes are all variants of the same!) but in terms of what was happening and why. Credit to Jon Watts, who is back for his third MCU Spider-Man film: He delivered a “final battle set-piece” as big as any Spider-Man movie before it and did so with the perfect blend of big spectacle and human emotion.

But we’ll get to the finale later. The movie has three very distinct acts, and each one improves on the one before it. 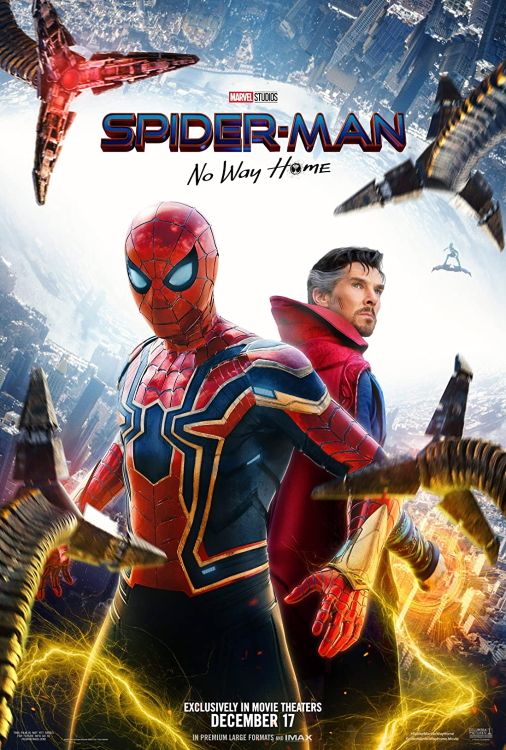 ACT ONE picks up right where the second movie ended, with Spider-Man’s identity being revealed to the world and that world suddenly whipping out their smartphones to record the teenager as he flips and swoops around town. In this tightly contained act, we follow Peter’s struggle with newfound infamy, and the trouble it causes those around him. It’s the kind of drama we haven’t really experienced in the MCU to this point, as one of the unique features of Feige’s film universe has been the absence of secret identities. Spider-Man being a minor was the exception, and both of the previous movies made the juggling act of his secret at least a minor plot point. In the first film, he tried to hide things from everyone, only to learn the value of having Ned in on the secret. In the second, everyone important to him except for MJ knew, and her finding out became a will-they/won’t-they running thread throughout the movie. Here, the whole world knows, which completely upends the dynamic. Helicopters are following him home, protestors are at his school, and as a result of the insanity, MIT is denying not only Peter but MJ and Ned their admissions to the prestigious university.

The film’s first act, while very good, is the most uneven. It is paced well enough and there’s more than enough snappy dialogue to keep you entertained, but there were too many times where I felt like the writers were hand-waving some obvious problems that would arise with Parker’s identity being revealed. Matt Murdock(!) is a fantastic lawyer but I don’t think even he could get the Feds to just stop pursuing a hero that everyone seems to believe is responsible for a ton of destruction and presumably a murder. The fact that the school kids are allowed to follow him like paparazzi is also a bit suspect.  It’s messy but it serves to hammer home the idea that Parker’s life is absolutely ruined. Everything builds to Peter’s realization that he knows a literal wizard with the power to fix everything, which takes us into act two…

ACT TWO is the bridge, where the movie transitions from “more of the previous movie” to (in act three) a huge multiverse spectacle like no other. In this tightly contained act, Strange’s spell to make everyone but Peter’s most important people forget he’s Spider-Man goes horribly wrong, leading to one villain after another popping up to cause trouble. If this was all the movie offered, it would still be enough for a homerun premise: Spider-Man taking on a Sinister Five of villains from other universes is a premise that sounds straight out of the action figure-littered bedroom of an eight-year-old superfan, daydreaming on a Saturday afternoon. It’s the kind of thing that could only be done with comic books and it’s (so far) the best example of what will set this new phase of MCU movies apart from the Infinity Saga before it. 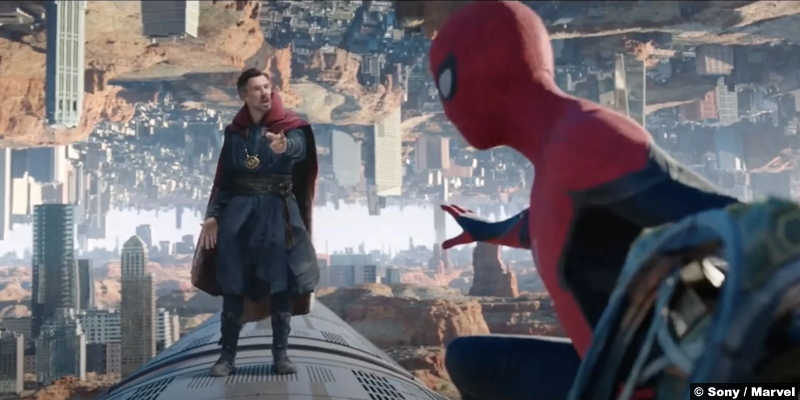 Throughout Act Two, it’s Dr. Strange that serves as the primary antagonist, both in person and, later, in philosophy. At first, Strange is myopic in thinking the only solution is to capture each of these multiverse villains and return them to their proper realities. Doing so means leaving them to die, however, as each of them is killed either directly or indirectly by Spider-Man. Strange is unbothered by this, though, recognizing that their fates are what they are and should not be tampered with. Spurred by compassion, Peter hopes for another solution, and fights off Dr. Strange to buy himself the time to save the villains rather than kill them. Even after Strange is taken out of the picture, his cut-and-dry option to get rid of the baddies lingers as the easy-out for Parker, but it’s Aunt May’s insistence that he do the right thing that keeps him on the right path.

Things take a turn when the villains do as villains do. The movie wisely focuses on three of the rogues in particular—Doc Ock, Green Goblin, and Electro—as they have the most to offer from a character standpoint. Doctor Octavius is a slave to an evil chip, Norman Osborne is dealing with a Smeagol/Gollum identity crisis, and Max Dillon has a lust for power (literally!) that blinds him to the help being offered. Like dominos they all fall, one by one, ending in catastrophe with Aunt May dying at the hands of the demented Green Goblin. Alone and helpless, Peter is at the end of his rope… 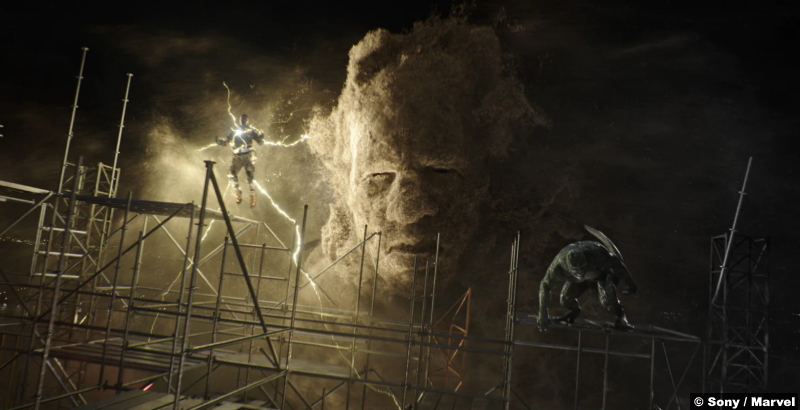 ACT THREE brings us the help Peter needs. Though they’re really introduced at the end of Act Two, it’s in this tightly contained act, where Spider-Man is formally joined by Spider-Man from the Raimiverse and Spider-Man from the Amazingverse. Both Tobey Maguire and Andrew Garfield return to their red and blue suits, bringing back their own personal takes on the character and, even more delightfully, bouncing off each other in the process. As said, if this movie had only featured a team-up of multiverse baddies, that would be incredible enough. To have all three cinematic Peter Parker/Spider-Man characters interacting throughout the movie…I don’t even know how to finish that sentence. I admit I had the big reveals spoiled for me, but even knowing it was coming I was still filled with goosebumps.

The three Petes work on various ways to fix, cure, or restore the villains, leading to a showdown on and around the Statue of Liberty. Despite having already seen these three interacting for half an hour, there was an obvious buzz and thrill in the packed theater as the fighting really kicked off, but things jumped to a new level of euphoria when the three Spideys huddled up to figure out how to work together.

It was magic watching the trio web-slinging around but the best parts of Act Three weren’t the set pieces or the spectacle, it was the emphasis on the human element. In his universe, Andrew Garfield’s Spider-Man was unable to save Gwen Stacy from falling. Here, he saves MJ, and the teary-eyed look on his face said everything needed to sell the scene. It brought emotions out of me and I hate the Amazing Spider-Man movies.

Watching Tobey Maguire’s Spider-Man stop our Spidey from killing Green Goblin (revenge for Norman killing Aunt May) was equally as moving and, once again, it was done by showing and not telling. We already know what happened in Raimi’s Spider-Man 3. We’ve already seen the dark side of that Spider-Man and, as he said earlier in the movie, killing the person who killed your loved one won’t make you feel any better. This was the moment when our Spider-Man’s philosophical ethos was challenged the most. Would he kill or would he save? In the end, he chose to save and brought Norman Osborne back from insanity.

After that, the film returns to where it all began: Peter Parker is Spider-Man and the whole world knows it. Parker’s attempts to undo that nearly ended the universe. Now it’s time to make things right, by making everyone (including MJ and Ned) forget who he is. Dr. Strange performs the spell, this time without Peter’s interference, and the movie ends with no one knowing what he sacrificed to save everyone. It’s not only a perfect full-circle moment but it also sets the stage for an exciting sequel to come. 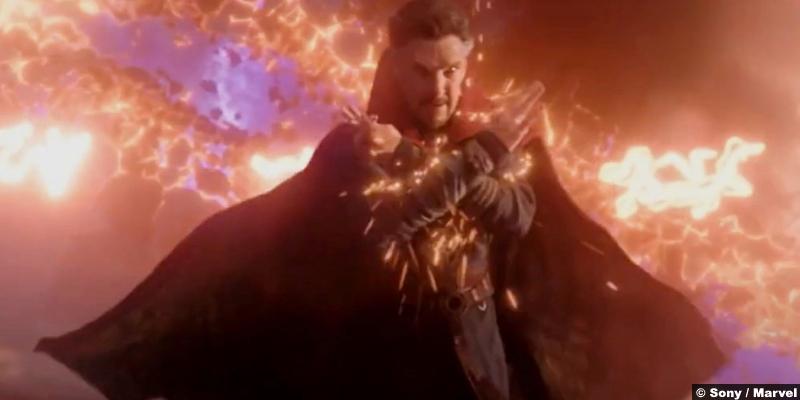 With all the toys No Way Home had to play with, the movie easily could have been a mess of big spectacle moments and set pieces without any substance or depth. Instead, the filmmakers and producers layered the movie with humanity, philosophy, and emotion. It is an amazingly crafted film, with three tightly constructed acts, sharp writing, fun moments, moving scenes, and still managed to cram in more fan service than I ever could have imagined. Instead of going for the easy, No Way Home went for the deep, and the result is one of the best MCU films ever.

10/10 – Easily one of the best comic book movies ever, No Way Home is the kind of film the kid-version of me would never believe could happen. That it happened and managed to be a marvelously well-made film is just icing on top. 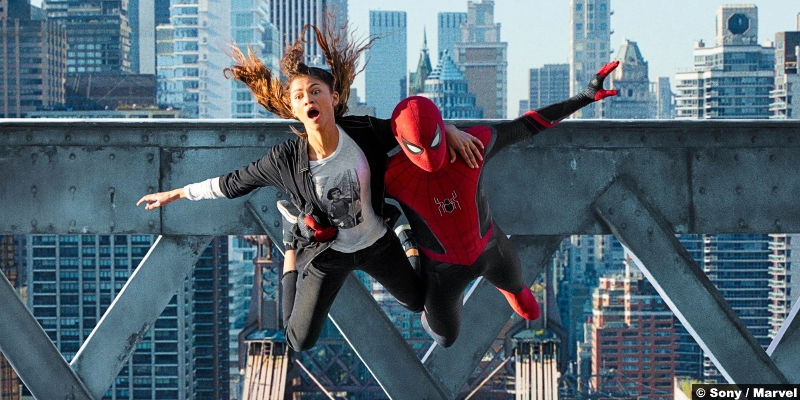