The Walking Dead S11E08 Review: For Blood – All razzle, no dazzle

By no means the episode I expected leading into a long hiatus for the three-part final season, For Blood does have its satisfying moments. What’s hard to forgive is the complete lack of resolution. Save for a single plot advancement, most of the episode is action sequences. If the last few minutes had been something more than just a few action shots, perhaps the episode would have had some substance to keep fans full until the show returns for the remainder of its run in 2022. Instead, we’ve got some 14th-century Korean fireworks and inconsequential cliffhangers to gripe about!

The episode starts strong, with Wells being sent out to divert the walkers. Killed by Maggie and her group, the growing tension between Leah and Pope sets up the episode’s ending. She blames Pope for sending Wells out as bait. He counters, insisting his ‘son’ was a soldier and his death gave them the information they needed to survive. Pope presses Daryl for more on Maggie, looking for any information he can squeeze out of him about the woman he seems hellbent on destroying. Daryl stays vague, telling Pope to check the trees. A radio call brings the three of them out front where the horde has returned, led by Negan and Elijah. The mines give Daryl reason to worry while bolstering Pope’s fanatical confidence. 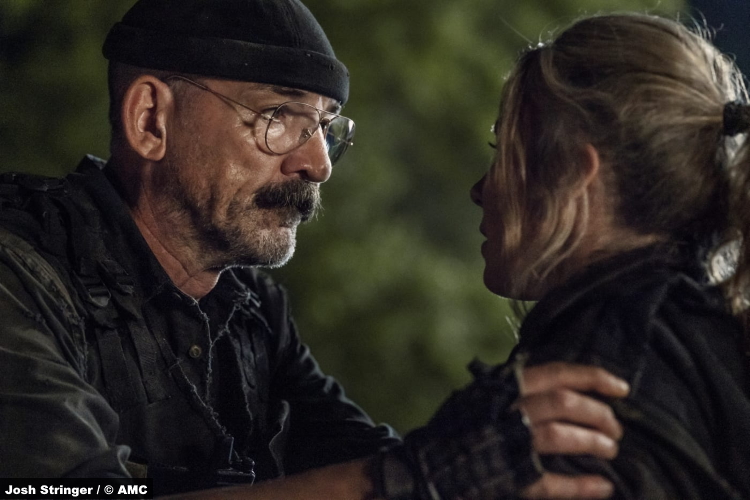 Like many villains, Pope’s philosophy is shallower than it first appears. Authoritarian to a fault and desperate to maintain some semblance of meaning through violence, the man operates in extremes. His obsession with Leah says a lot about how performative his dramatic violence really is. She’s the only woman we see in the Reapers and holds a high position. She’s also the only one to openly challenge Pope. Perhaps it really is Daryl’s presence that pushed her to be more assertive against her leader, but I suspect more complex motivations are at play. Leah serves both as the surrogate mother, sister, and sex interest to the group, giving them buy-in and a more sympathetic leader figure to soften the insanity of Pope. Carver is a good example: relying on Leah for direction, comfort, and certainty while also looking to possess her. For Pope, who considers them to be his children, the complexities are shifted. She goes from mother to wife, sister to daughter, sex object to right hand. Leah challenging Pope or earning the favor of the men isn’t an issue when she obediently carries out his word. The black sheep, prodigal daughter, and golden child all wrapped into one very traumatized woman makes Leah’s affection for Daryl make more sense as well. He treats her as an equal, a partner.

His betrayal hits all the harder then as he goes to cover for Gabriel and Maggie, killing a scout and breaking the lock on the food storage. Once inside, Gabriel goes off to find a hidden weapon while Maggie looks for a way to break through the gate. Hotwiring a red truck and slamming it into the gate, a timely sniper shot from Maggie saves her life as the melee ensues. Above, Daryl confesses the whole of his deception to Leah, telling her his people are out among the Walkers and offering her a chance to come with him. Pope arrives before she can give a full response, telling him they’d been discussing “family” when he asks. The hwacha loaded and aimed down at the crowd, Pope makes his fatal miscalculation: Leah loves her family, not their father. She lets Daryl escape while the other Reapers head to her location, but she doesn’t hesitate in firing the hwacha down to close out the episode. 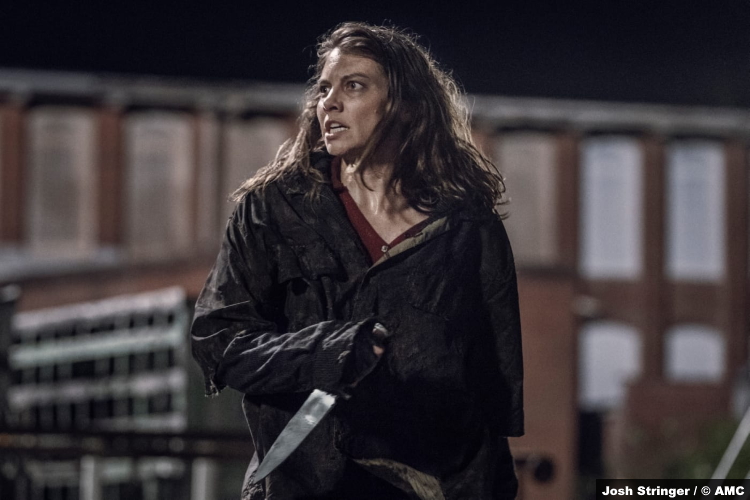 Although effective at pacing out the violence in Meridian, the story elements between the storm in Alexandria and the storming of Meridian isn’t enough to justify leaving us without a conclusion anywhere else in the episode. With no movement in the Commonwealth plotline, a breach in Alexandria is a little like gilding the lily. The episode has plenty of violence, lots of loud noises, it’s shot at night in both locations, and unlike other episodes, there was no need to remind us of the stakes at play. Split into three teams, Carol leads one group to repair the wall, Aaron takes another to put out the burning windmill, and Rosita leads the defense.

When things look bad, Rosita heads into the storm to fight off some of the zombies near the house, buying them time. Judith watches in fear as Rosita single-handedly takes down half a dozen walkers in one go. She jumps further into the fray as lightning illuminates the scene. She comes in exhausted, soaking wet, and delivers a badass line: “let’s stay away from the windows.” Post-apocalyptic moms are next level! Unfortunately, the relief is short-lived and the zombies overrun the house. Looking for Gracie, Judith and her become trapped once walkers breach the house. Locked in a flooding basement, the two young girls have weapons but no real-time or options left. 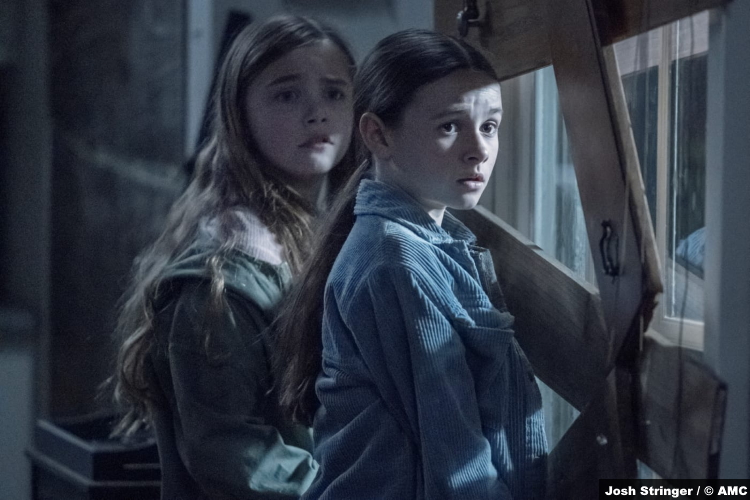 Unfortunately, both these cliffhangers are incredibly low stakes. Worst case scenario, Elijah dies from the hwacha to give Maggie a deeper motivation to kill Leah. The most likely scenario, none of them get hurt, Gracie and Judith are saved, and we get the ending we should have gotten in this episode. Had Kang and crew stuck with the writing approach they foreshadowed earlier in the season, we’d have had at least a single plot concluded. Instead, the only two plot advancements we get are: Pope is dead and Daryl/Leah isn’t a go. It’s hard to sit for months and still feel that tension and excitement. It’s even harder knowing you’ve got another season break waiting ahead. It’s why we know no one will die. The television business is pretty transparent and passing up months of “oh wow this character actually died?!” or “what a great battle!” it’s “cliffhangers and jazz hands!” That means nothing bad will happen to our main characters and the plot will end exactly how you think it should. 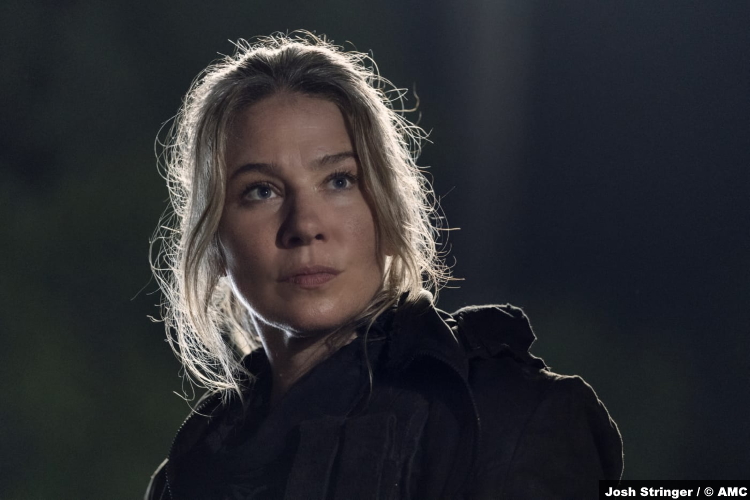 Even in a traditionally formatted show, with all 24 episodes played without a significant break, we should have some meaningful resolution to any of the plot elements introduced this season. The closest the show’s come is rescuing Connie, who went missing last season. The Reaper’s leader is dead but the Reapers aren’t and a considerably less unhinged one is now in his place. Alexandria is still in danger and we didn’t see a single Aaron or Carol team scene. We have no idea what Eugene did or didn’t do, let alone what happened to the rest of the crew out in the Commonwealth. Add in that this is essentially a season finale and the choice to end on a cheesy firework CGI launched at-camera is a disappointment no matter how out-of-the-box the idea might be.

6/10 – A fun episode that would make a great mid-season pacer but is an awful mid-season finale, For Blood shows a lot of movement but delivers very little advancement. All three main plot locations and all four main plots of the season are still essentially exactly where they were when they began: the Commonwealth is sketchy, the Reapers are violent, and Alexandria is struggling. Breaking the show into three chunks should have encouraged Kang and her team to break format and defy our expectations. Instead of three incredible finishers this season, we’ll be lucky to end up with one at this rate. If you’re going to write the show like episodes play weekly, play them weekly. Giving an audience nothing and saying TBA on the next air date feels like resting on fandom to carry your spin-offs. Committing to the MCU style of endlessly regurgitated IP was probably a decision made over the actual showrunner’s head, but it’s still hard to enjoy this episode for what it is knowing what it means in the show’s history overall.