The Walking Dead S11E06 Review: On the Inside – Homage homecoming

Romero himself would be proud of Kang and crew’s 6th episode of the final season. Layered with incredible horror allusions, the episode largely takes place in one of two houses. Both have people trapped by deadly forces, both are hiding secrets, and both eventually end up empty. After the slower start to season 11, On the Inside traps us inside, plays up the disability of a character without disabling them, and sets a terrifying tone for the two episodes left before the first season break. “Night of the Living Dead”, “Hush”, and “The Texas Chainsaw Massacre” all mash together with bone-chilling fanfare in perhaps the best episode of the season so far!

With news of Connie’s survival brought to Alexandria’s attention by the squatting Whisperers at Hilltop, Kelly didn’t wait for the committee’s decision to head out. After managing to find the remnants of a camp surrounded by a dead horse, Kelly finds her sister’s slingshot and a notebook detailing her time with Virgil. For those who don’t remember, Virgil is the deranged man who drugged Michonne after his family’s death. We catch up to his redemptive arc long after parting with Michonne and finding a horse at Oceanside. The pair are both anxious, exhausted, and psychically scarred as they escape from whoever was following them into an old house. As Virgil realizes later, the herding was successful. 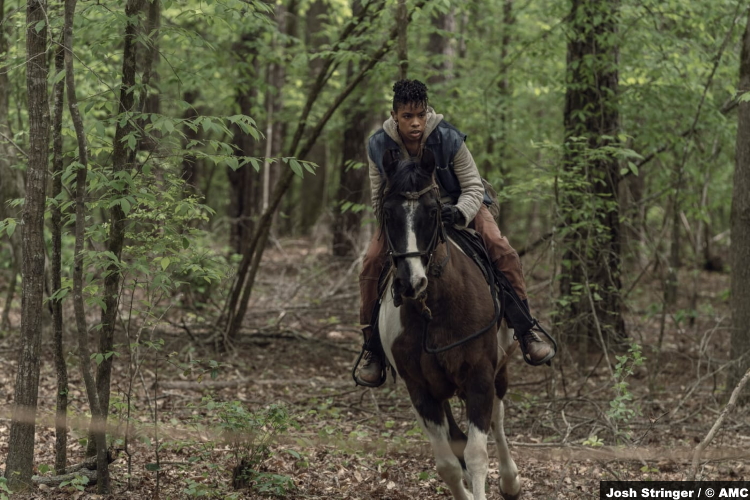 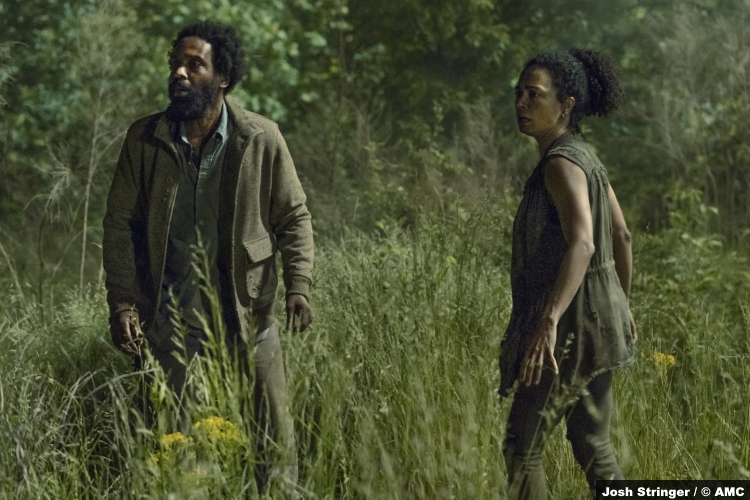 Connie’s return to the screen sold me on Lauren Ridloff as the next great horror lead. Her ability to capture the trauma of marching with walkers for days, caught in an explosion, cut-off from your group, and now wandering with a strange man who knows the name of your absent friend and former leader. The intense anxiety Ridloff portrays without making sound makes the brilliant directing choices pay off. I found scenes where the horror music played or natural sound returned to be less impactful than the creeping, unnatural stillness of an absolutely muted world. Bringing an audience of mostly hearing people along for the experience of surviving without making Connie helpless or ineffective does two incredible things: 1) portrays people with disabilities as having agency and 2) shows how disabilities genuinely do affect her life. Connie isn’t stripped of her deafness by a superpower or unnatural abilities. She’s unaware a fight is taking place until dust falls and shelves start shaking. She can’t clearly communicate as Virgil doesn’t speak Sign and the intense emotions make carefully jotting notes between them nearly impossible. Playing with the tension between the two senses most at-play in watching television makes for a brilliant episode.

Connie’s search of the house reveals eyes scratched out of paintings and a terrifying, yellowed-pair staring out at her from a razor drop in an old medicine cabinet. Connie eventually convinces Virgil to search again with her, only for the pair to be separated. With Connie cut-off and on her own, she’s attacked by one of the house’s residents. Watching her navigate the tight corridors between the walls with half the shot obfuscated built a kind of fear I’m not used to feeling on The Walking Dead. Gore and viscera are expected, jump scares regularly celebrated, and the crew even plays with uncomfortable, elongated tension from time to time. What we don’t see much of is the technical side of horror. Selectively applying sound, giving the viewer enough information to build ironic tension but not enough to actually explain anything, using frustrating amounts of low-light, and the plodding, slow editing style even in tense scenes works super well. The fixed-view, single-shot “Silent Hill” style of terrifying audiences works perfectly On the Inside. 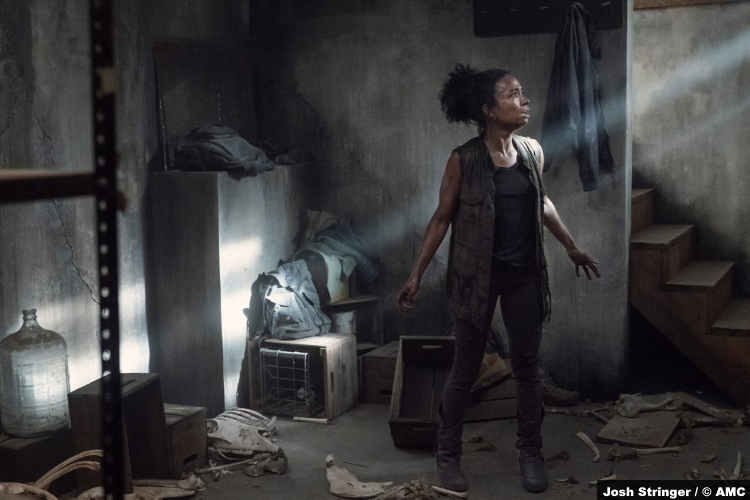 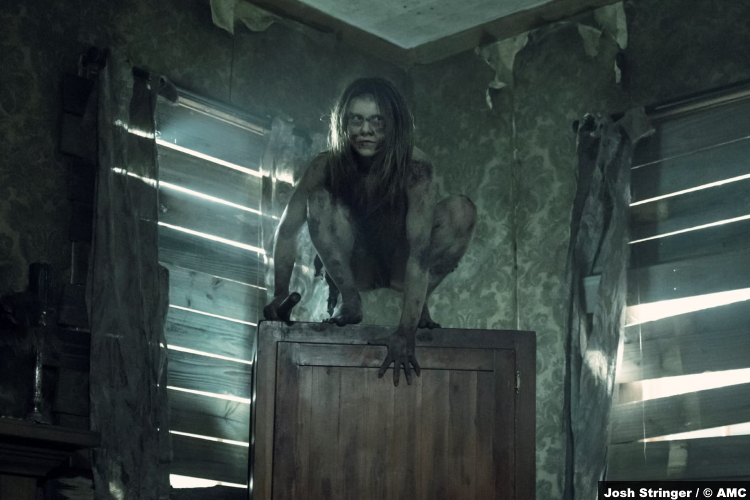 Virgil and Connie are eventually attacked by the remaining Sawyer Family Wannabes. With Virgil severely wounded and little choice, Connie’s solution is absolutely flawless. Like all the great horror heroines before her, she digs deep (in a walker’s guts) and shields Virgil with her viscera-slathered body before letting the walkers in to devour their attackers. Breaking out, exhausted and collapses, it’s Kelly with her sister’s slingshot who saves the day in the end. Every single moment of the Horror House plot in this episode paid off. I don’t know what Ridloff did for Kang to get this incredible opportunity to perform and reintroduce fans to Connie, but I’m definitely hoping to see her make it to the end of the season now! 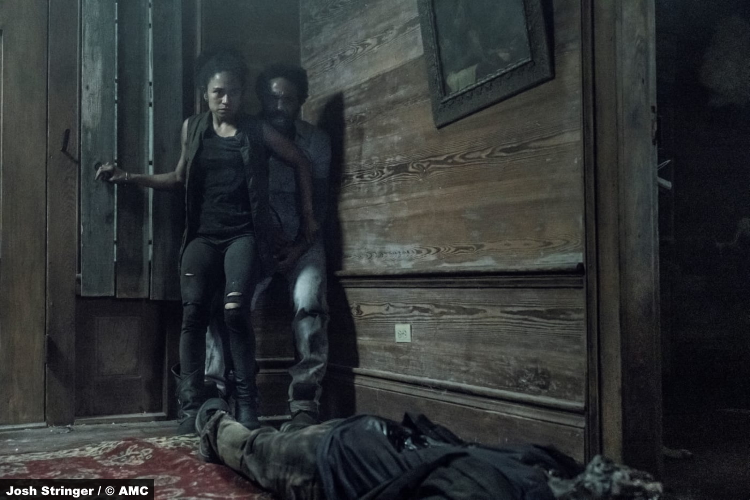 The other major plotline in the episode mostly sets us up for what’s coming next: Pope vs. Alexandria. Brought in to assist in the torture of his ally, Daryl cuts a finger off without hesitation. The prisoner gives up a location and while they go off to explore it, Pope continues the interrogation. Daryl and Carver, the Fabio-haired Reaper obsessed with Leah, continue their fighting. Carver reveals something similar happened in the past to their current situation and he’s trying to protect Leah from the same outcome. Daryl manages to hide Maggie and the crew well-enough, giving them a warning using a downed telephone wire and covering the basement hatch a bit better. They escape before Carver finally notices and Daryl snarky remarks he was right, they’d already escaped. 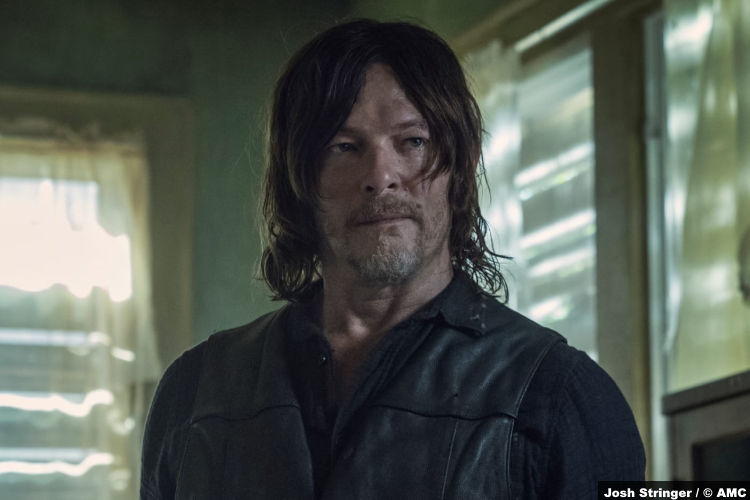 Unfortunately, when they return to Meridian, Pope reveals he’s learned a great deal and happily tells Carver as they walk away. Whether it’s a total bluff or not is impossible to know. As Carver told Leah, “Everything’s a test now!” Maggie and crew have a sense of how many Reapers are in Meridian thanks to Daryl now, but how long with the man on the inside survive? I’d like to think that Pope actually doesn’t know anything and tricks Daryl into revealing his hand. That’d definitely be a more terrifying antagonist than brutal torturer and mild sociopath. Not that Pope isn’t scary with just those traits. I expect there won’t be any more slow episodes ahead of us now that Daryl’s revealed his only true allegiance is to Leah. What I really wonder is which side will she end up taking, now that it’s clear her place beside Pope is more contested than she expected.

9 /10 – Overall, On the Inside digs deep into the toolkit and presents a horrifying homage as a homecoming for Connie. The ordering of scenes doesn’t always help and not enough time was spent establishing Virgil and Connie’s connection. The blurry timeline of the season showed itself more than I would have liked, especially with the Michonne/Virgil/Connie narrative. The show seems to suggest more time has elapsed since the showdown with the Walkers than apparently has. That aside, gorgeous shots complimented by crafted editing allow the characters to sell the story. Despite drawing on well-known tropes and playing to them perfectly, the episode manages to build tension, keep it moving, and deliver an incredibly satisfying, sink-your-teeth-into-it conclusion. If you haven’t already, sit down and watch this one!