In a true deal with the Devil, Maggie agrees to Negan’s condition to join them on their (hopefully not) suicide run. Standing in front of a priest who is certain God isn’t here, their oath is made in an episode that promises promises will be broken. Elijah sees his sister’s best friend put down by Maggie as a herd that’s what remains of Meridian grows closer in the background. With her army gathered and her cause clear, Maggie makes a declaration: “We have to get them. All of them.” As the title music plays, we’re shown a hint of what’s to come: Connie and Maggie draw from the same whispering well when backed in a corner.

The episode splits its time between the three major locations, with the bulk of the episode’s story set in a world fairly familiar. Serving their sentence in the Commonwealth, Princess’s quippy dialogue confirms her status as my new favorite side character. She and Ezekiel are paired together while Stephanie and Eugene discuss Hornsby and how much weight can be put on his word. The vague allusions to the promise of labor earning freedom and stormtroopers watching an under-armed and under-armored underclass kill zombies make me wonder. Feels a little like we’re in for some kind of fascist ‘utopia’ here. Even if that does mean “real hospitals and shit” as Princess says, I’m still not convinced. As Eugene watches a 1950s couple pass by and mock a laboring underclass, it seems he may not be either. Meanwhile, Yumiko’s Ivy League education has earned her a legal position alongside Ms. Milton and her cabinet. A position she’s assured she won’t want to leave. 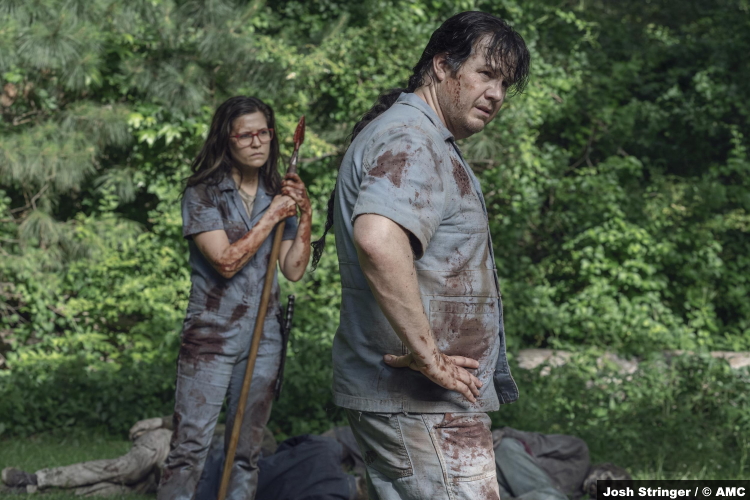 While visiting her brother, Yumiko once again presses Tomi to consider being a doctor and he continues to hush her. Once he forcefully convinces her to put the matter to an uncomfortable rest, guards arrive and arrest Tomi. The loudspeaker informs us, “that’s the Commonwealth way!” Yumiko’s way gets her to a conversation with Hornsby who says he needed to buy time to arrange her two big asks: help for her community and her friends given a pass for breaking the law. The obvious quid pro quo laid out, Yumiko realizes that she may be caught in a game of chess far more complex than she expected. With Ezekiel as good as new, he and Princess go with Hornsby to another assignment. 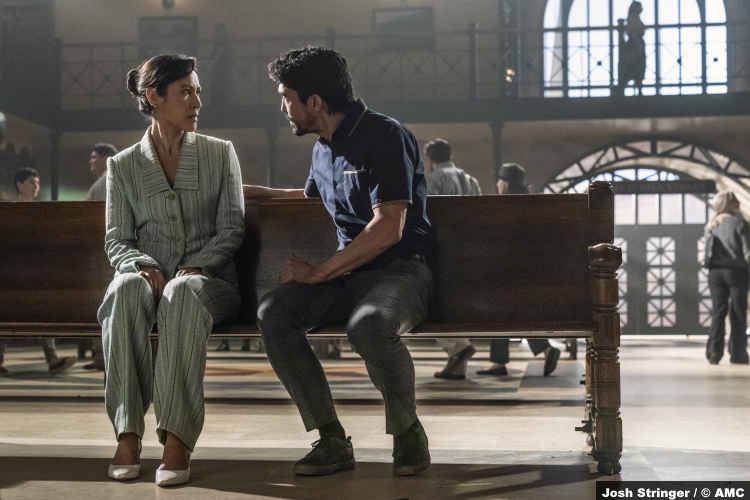 With class status clearly not on the top of his mind, Eugene rescues a snarky jerk from earlier. His private security did nothing and despite the many “rotters up his ass” the immense privilege of the man-child stinks up the scene. When armed guards swarm Eugene for hitting him and Hornsby raises a question all too common in our world but certainly not in his: “Do you know who he is?” The phone call that reschedules Yumiko’s meeting with Ms. Milton confirms the obvious. Someone attacked her son! Hornsby reveals the set up: Eugene was meant to be a hero but instead now will betray his friends, their community, and everything else. Falling into what is perhaps Hornsby’s actual ploy, Eugene appears to give up Alexandria and the episode’s title makes sense. 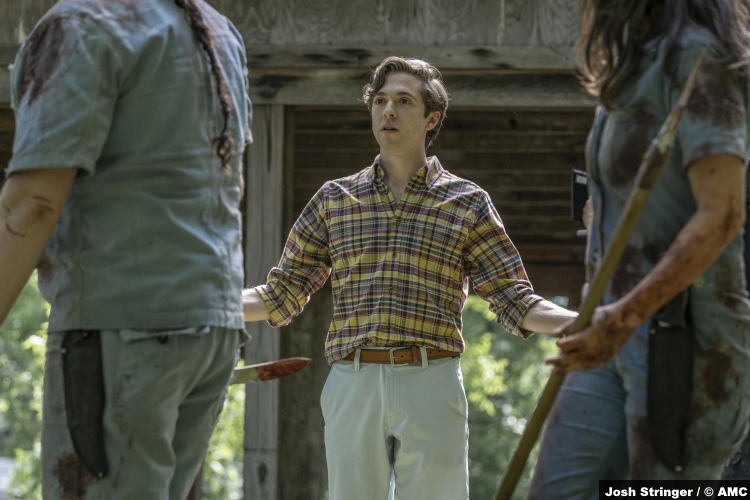 Before we return to the wasteland, it’s worth diving into the Commonwealth a little further. Hornsby appears to be quite theatrical. The whole performative nature of the Commonwealth feels like a meditation on the facework of daily life. The cruel injustices of the wasteland appear rational compared to the logical, calculated arrangement of authority and status in the Commonwealth. The strong survive and the weak die. The cooperative collaborative and the deceitful deceive. The uncomfortable negotiations of our daily lives we escape in the fantasy of slaying hordes of zombies is brought back and seeing it imposed on our heroes gives me a tighter chest than any scene from the wasteland in quite some time. I fully suspect that Eugene has doomed his friends in the Commonwealth and outside it. Hornsby doesn’t seem like a man to keep around pawns he doesn’t need any longer. Or maybe I’m just skeptical and jaded about our own society and perhaps the guy in the rigid, tight suit using imprisonment to coerce information is actually the hero here.

Back in Meridian, Leah steps in to save two Reapers from Pope’s wrath, only to be sent out to search on her own with Daryl. He inquires about their history and Leah’s faith in Pope. She says he’s made her strong but Daryl doubts she ever needed anybody for that. More doubts appear as evidence of someone living out in the woods appears, despite the patrols claiming to have found no signs of anyone. A man who claims to be trying to tend to his hurt wife is all the pair find. Leah radios it in and Pope gives an order. She looks almost content with the decision: kill them. Daryl hears but says nothing, pushing the man onward back to his base. 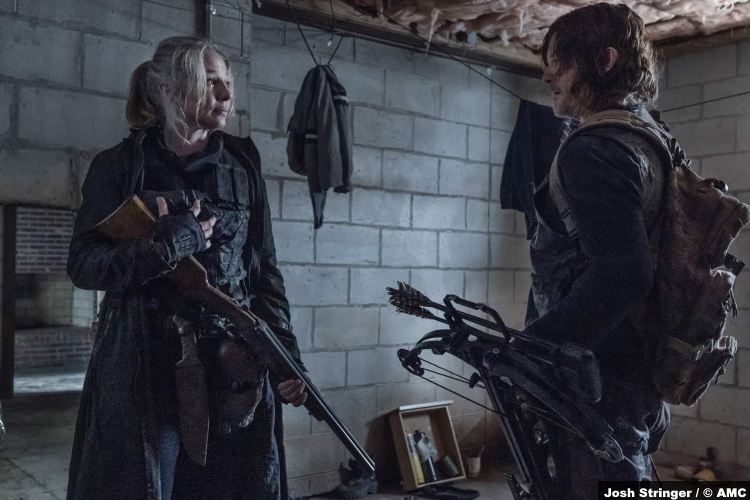 There, they find he was telling the truth. His wife is badly wounded and there’s a young child with them. Leah tells the man to escape with his child and leave behind the dying wife. Wounded, she says they’re an answer to her prayers and thanks the pair. Daryl delivers the final blow, tears stopping Leah from killing a person ready to die. She tells Daryl that she’ll tell Pope he killed them. It’ll be good for him. As Daryl covers the body and is about to reveal something to Leah, a call from Meridian brings them back.

With their arrangement clarified Negan starts to train the other three survivors how to walk among the dead. Maggie struggles a bit at first but Negan is oddly encouraging. Meanwhile, Gabriel is sent out to scout the settlement. Having taken Maggie’s encouragement to heart, Gabriel spots a Reaper on his own near the edges of Meridian. While the preacher lies in wait to kill the praying Reaper, an apparent revelation from God tells the Reaper to leave and Gabriel is left to doubt. While he reconsiders his vows, Maggie finally herds a few walkers Negan seems pleased. Elijah asks if she’ll keep her promise, if she really believes Negan has changed. Maggie wisely says you can never know and their conversation later makes clear he has. Negan tells her he would have killed everyone back when he had the chance, that his regret was letting his people die for having shown mercy. He tells her for their armistice to work, they’ll need that kind of radical honesty. 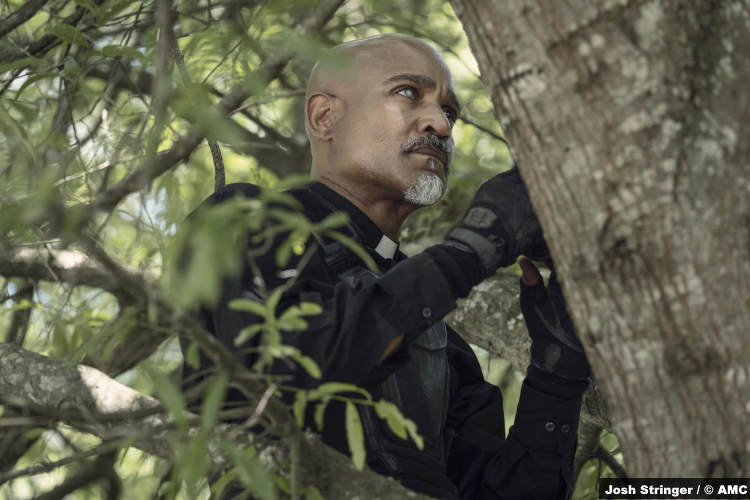 Leading the horde they’ve gathered, Elijah’s sister walks alongside Maggie toward the settlement she built and lost. Their dead allies join them once again and we’re left to wait for their chance at revenge! At the episode’s end, I’m left wondering which promises are still intact by the episode’s ending. Yumiko went back on her agreement to give Hornsby time, instead, attending her meeting with Ms. Milton that’s postponed regardless. Daryl’s been lying to Leah and Leah just disobeyed direct orders from Pope. Eugene sold out Alexandria. Gabriel lied about having seen any Reapers (and having possibly been spotted in return.) Maggie’s encouraging belief that Elijah’s sister is out there falls flat. What’s left is the one promise you’d least expect to hold: Negan and Maggie have reached an understanding and have a shared purpose. They’re going to kill every single threat that remains for Alexandria inside the walls of Meridian.

8/10 – An incredibly busy episode that brings us to a perfect setup for the midseason break, Broken Promises delivers on its title. Leah’s blind obedience to the Reapers and orders is a show, Negan’s unapologetic ruthlessness is now transparent, and Maggie’s leading a horde of walkers into the home she built. Fascism was fully on display in the Commonwealth, Eugene didn’t even take a little torture before breaking. Breaking the mind will always be so much more effective than destroying the body. Especially when you need those bodies to clear out zombies for future housing development! Nothing in the episode is particularly groundbreaking or unpredictable. None of the technical elements are new or used surprisingly. None of it should have been! Armed with clever dialogue and tight writing, the cast delivers an excellent show that ties together the major elements of the final season’s first part and sets them all up to explode next week! 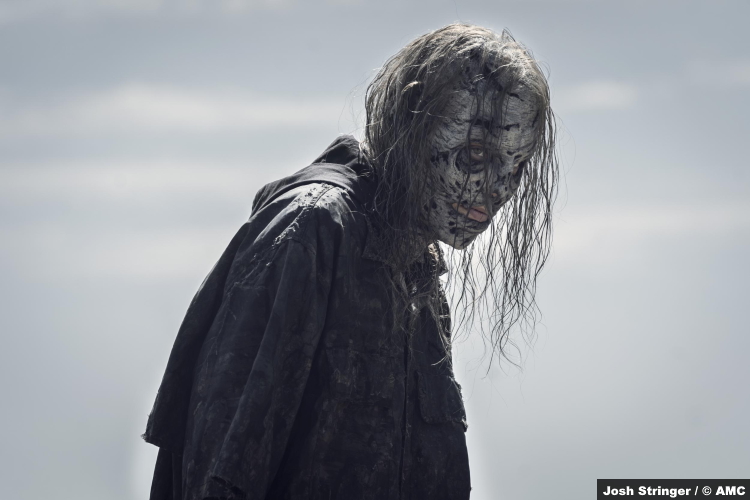