Evil S02E12 Review: D Is for Doll – That scattered feeling…

This week, the assessors get their case from Dr. Kurt, but somehow the Church still manages to call the shots. On that note, Leland has finagled his way into a job with the Church, where he’ll apparently be supervising the assessors? That sounds fake, but okay.

But first, the assessing. Dr. Kurt’s patient Nathan (Ato Essandoh) is a fairly recent widower. He lives with his teenage son Elijah (Elijah M. Cooper) and an apparent presence in their home. The presence has gone so far as to push Elijah, causing him to break his arm. 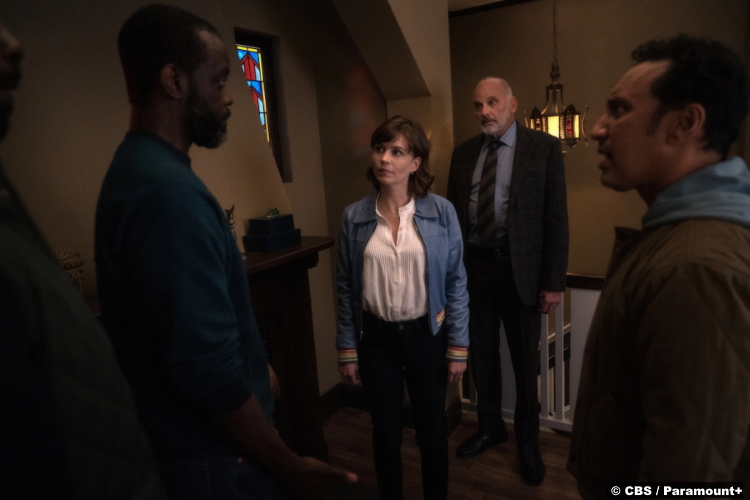 At first, the assessors, accompanied by Dr. Kurt, don’t see much of interest in the home. There is an odd stain on the ceiling, though, which Nathan attributes to water damage. Ben immediately heads up to the attic to see, though.

The first clue that something’s amiss is that the attic stinks. It smells like death, actually. They trace the smell to a trunk that’s tied shut, which is definitely ominous. And I would ask, like, “Uh, what’s this tied-shut trunk you got up here?” But Ben isn’t me.

Ben just cracks it open. And when he finds a sealed box inside, he opens that, too. He does not find anything good. Instead, he finds a doll, just like the creepy Eddie doll that Sheryl has. This is, in fact, another Eddie.

Nathan’s late wife bought it at a flea market. She was amused that it came with a long list of rules for its care. What is he, a mogwai? Yeah, see how well that turned out. Anyway, I wouldn’t buy it but I’m just made differently. (I’m made where I don’t buy creepy dolls.) 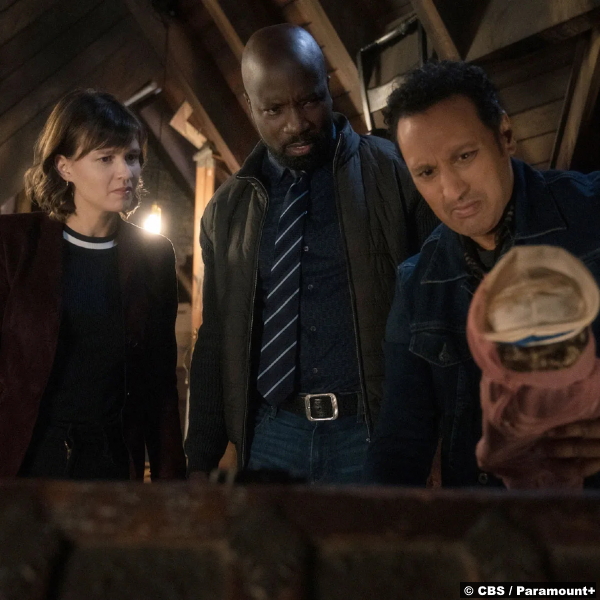 But that’s not the only creepy doll we have this week, mind you. Bouchard daughter Lynn (Brooklyn Shuck) is babysitting a little boy, Sebi (Zachary Golinger). He seems a bit intense at first, but he has his reasons.

We find those out when Lynn suggests they play hide-and-seek. She finds Sebi, not hiding, but sitting on his bed. He’s staring at a moving rocking chair. And on the chair? Another Eddie doll. Yikes.

Even more yikes is what he’s say when Lynn asks why he’s not playing. Eddie doesn’t want him to, so he can’t. “He just seems small, but he’s actually big,” Sebi tells Lynn. Yiiikes.

Later, Sebi’s parents show up at the Bouchards. Sebi’s doll has gone missing, and they not so subtly ask if Lynn might have taken it. Lynn didn’t take it, not on purpose, but it somehow ended up in her bag. When she goes to get it, though, it’s gone.

It turns out that Laura took it so she could play with it. Why anyone would want to play with this porcelain demon, I couldn’t fathom. But when she retrieves it, Lexis sees and thinks it’s grandma’s doll. So they return it to Sheryl’s.

Her Eddie has been put away, so that’s why they think it belongs there. For her part, Sheryl spends the episode doing two weird favors for the increasingly weird Edward. In return, he gives her his great-grandfather’s head in a jar. Sure. And when she returns home to find another Eddie doll, she rolls with it. Actually, she sets up both of them with the jar and then prays for something to “use” her. Sure.

Meanwhile, the Church has diagnosed Nathan’s home as having a demonic infestation, so they bring in the very flamboyant Gregory (Michael Laurence) to cleanse it. He makes a big show out of it and declares the house clean. It is not clean.

Not only does Dr. Kurt see a demon, who boops his nose, but things just get worse for Nathan and Elijah. Elijah had complained about itching under his cast, like a feeling of bugs under there. Sometime during the night, he saws off the cast, seriously injuring his arm. Nathan ends up asking for the doll back. He’d convinced his wife to stop following the Eddie rules, and a month later, she was dead. He’s too scared to risk his son.

And while all that is going on, David’s ordination is rapidly approaching. He’s still intrigued by that other church he visited, but the luster wears off a little once he finds out the pastor doesn’t believe in the devil. Or at least, not the version that David’s been fighting. Still, though, David is clearly nervous about the things he’ll have to give up to become a priest.

But he’s got Sister Andrea telling him he’ll be needed for the battle that’s coming. He’s also got Kristen, who tells him to “go get ordained.” Before that, they share a lovely moment in which they get to entertain the fantasy that they would have been in love if they’d met before all this. But they didn’t.

7/10 – I’m not even going to pretend that I understand what’s going on with Sheryl’s storyline. But maybe we’ll find out next week, when the season ends. Wait, Edward, Eddie? Are these two related? Anyway, this wasn’t a bad episode, but it still suffered from the scattered feeling that several episodes this season have had. It just feels like they’re not integrating all these storylines as well as they should. I think the Sheryl storyline is supposed to intrigue me, but it’s not working. 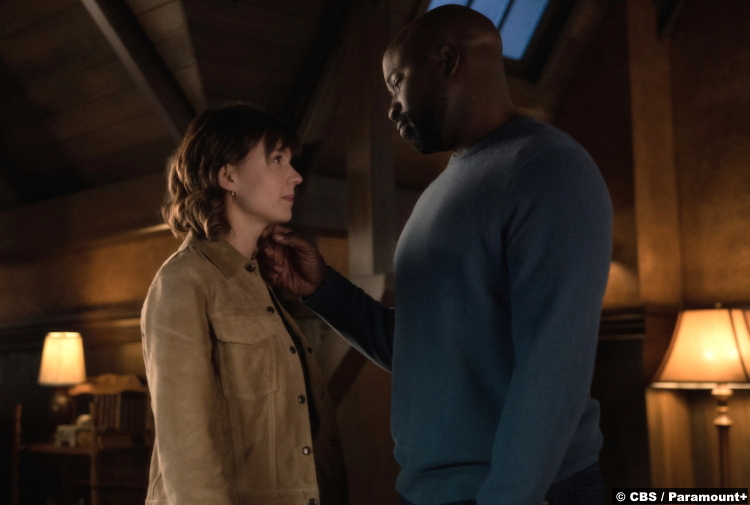