I questioned last week why Tonya didn’t go to the police instead of Cassie. This week, the show provides us with a plausible answer. I love when they do that.

Anyway, it’s simple, really. It’s another way of pulling Cassie (and Jenny) into the story. It also adds suspense, as Ren now knows about Cassie, but she doesn’t know about Ren. And, of course, it does it all in a much more naturalistic way than having Ren galumph about town, drawing attention to herself. 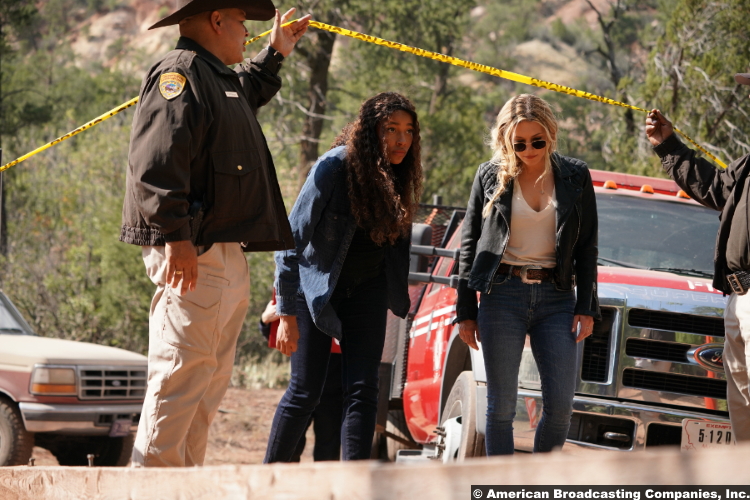 At the same time, Cassie and Jenny are filling in Sheriff Tubb on how their respective cases (Big Sam being missing and the accident) are connected. He is not thrilled, because the last time they all worked together, he got shot. Still, though, he lets them know that Big Sam was under investigation by the state, so Jenny needs to loop them in, too.

Of course, the state guy is Travis. He’s aware of Big Sam, or at least, that Sam was the local connection for the cartel. Yeah, we know all this already. Stop telling me these kinds of things and start telling me stuff I don’t know. You know, like why Jenny is all of a sudden so hot for Travis, a guy we’d never heard of until like, five minutes ago. Or what the deal is with this cartel. 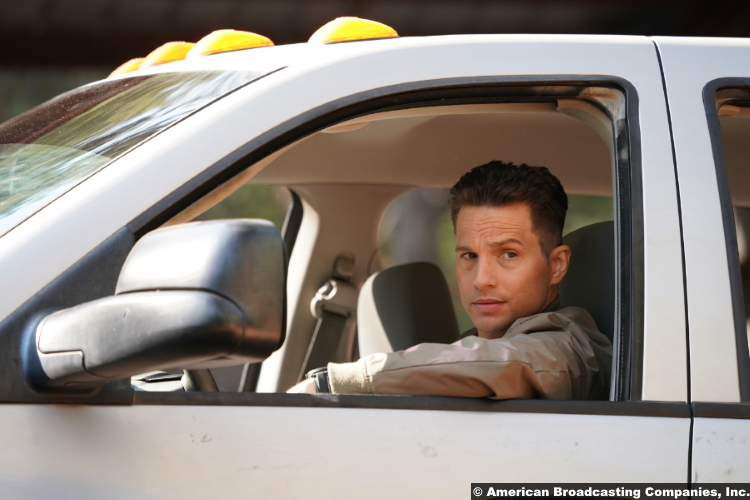 But they don’t tell me any of that, so let’s check in on the kids. Since Tracy, aka T-Lock–still not working for me–found Max with the drugs, she’s got to rid of the bigger portion. So Harper comes over to help her move it all out. Unfortunately, Tracy comes home at that moment. I don’t know why they’re so surprised–he’s a ne’er-do-well without a job. Anyway, they pretend like they’re just in the shed to make out, so he’s still blissfully unaware (as far as we know).

Meanwhile, Bridger spent his $2000 on a police scanner. I was going to say that surely, he didn’t spend all of it on a scanner, but then I found out that some of them can be pretty pricey. Anyway, that’s actually a smart purchase, because he can get a heads-up on things like the police finding two bodies. 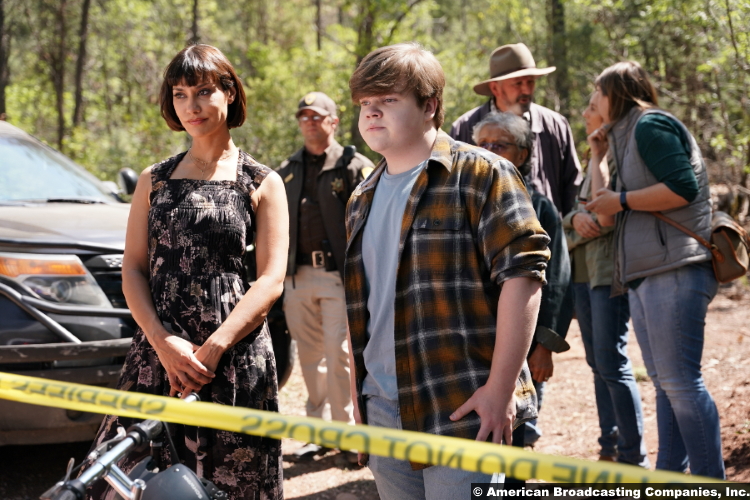 It’s Big Sam and the guy he almost killed, Ringo. This discovery isn’t great for Deputy Harvey, who was supposed to dispose of the bodies in a way where they wouldn’t be found like, the next day. It’s also not great for Bridger, who goes to the scene to be a lookie-loo. That’s because it puts him on Ren’s radar–she chats him up while they’re both there, watching the detectives.* It’s unclear, however, if she’s just trying to rattle him for funsies, or if she suspects something about him. She’ll have plenty to suspect, though, if Harvey shares with her what he finds this week, that Bridger was the kid who wanted to report a crime.

And while Ren is occupied with this mess, Donno is narrowly escaping one of his own making. He lets Tonya go to the bathroom outside, and she uses it as an opportunity to escape. She manages to call for help from a local business, but Donno kills the owner and recaptures her before the police can arrive. Still, though, they have an idea of where she might be since they know she was running from her captor when she called. 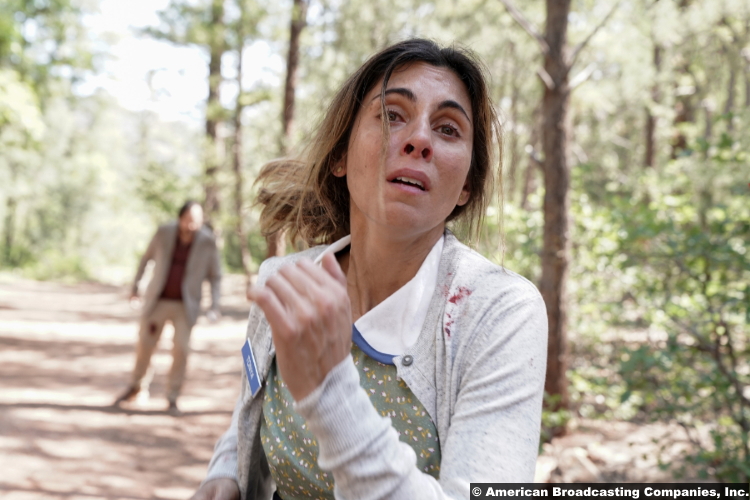 They seem to pinpoint the place where they’re holding Tonya, a construction site, exactly. And that’s how we end things this week with Cassie and company. Cassie’s approaching the office trailer while Ren and Donno become aware that there’s someone outside. Watch them be in two completely different locations, though.

Jerrie’s been helping Cassie out on this, of course, but she’s also been a bit preoccupied. She’s found a book on dog training by “Wolf” Legarski. It has to be upsetting for her to see Rick’s double, even though Ronald was the one who actually took her. 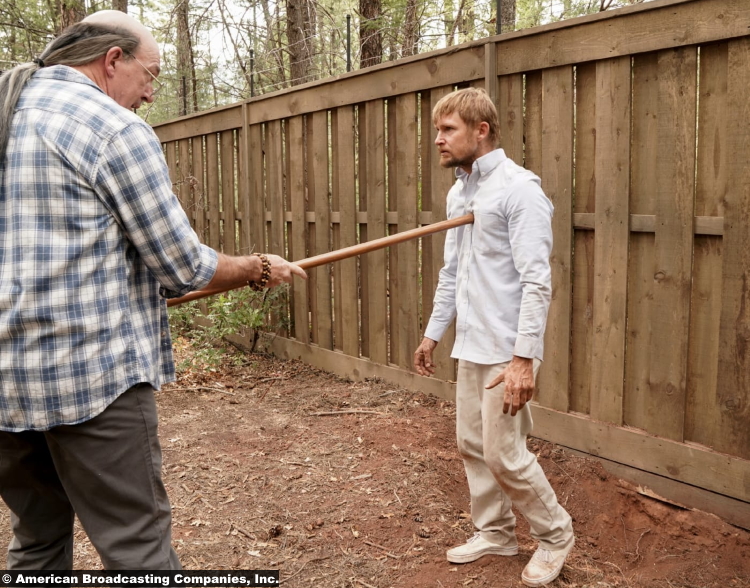 Back at Wolf’s den–won’t apologize for that–Ronald is still flunking out on his be-a-real-person rehab. Wolf, on the other hand, is running out of patience. In an effort to put Ronald more at ease, Wolf even shaves so he’ll look more like Rick, whom Wolf clearly hates. However, it doesn’t work. Ronald acts like a petulant child who does things like refuse to eat his breakfast. Even as Scarlet, who’s doing great, pleads with him, Ronald still won’t bend. And if I’ve said it once, I’ve said it a million times: what doesn’t bend, breaks. Or in this case, gets knocked out by Wolf. Better luck next time.

7.7/10 – I love doing fraction scores. Anyway, this was an engrossing episode–I was surprised when the promo for next week kicked in. At the same time, we’re still setting the scene and I want to know more. I want to get the story going. But I guess I have to play along, right?

*Yes, this is an Elvis Costello reference.