The Walking Dead S11E03 Review: Hunted – Staged like a play

Dropping us into the brutal ambush of the Reapers, Hunted takes a bold step forward for Season 11. Lauren Cohan solidifies her lead performance with a rendition of “The Blair Witch Project” as what’s left of Meridian dies around her. Daryl’s whereabouts remain unknown as the episode progresses, giving us a look back at Alexandria as the Away Team fights for survival against their fanatical pursuers. By the end of the episode, the team has two functioning members and two more lost in the wilderness. The cross marking where Alden waits hangs ominously as Negan comes to wonder if he isn’t indeed at fault for it all. The church is strikingly similar to the one he found himself in as Lucille died.

Much of what succeeds in Hunted comes from the episode’s tight writing. From the thrilling beginning to a pensive reminder that things are not well on the homefront either, the tension across the episode genuinely breaks at moments that had me feeling optimistic in the apocalypse. The scenes in Alexandria are heartbreaking and complex, carried by a cast of actresses I forgot could hold their own on-screen. The four children playing foreshadow the curtain drawing closer on the Away Team. One of them, Judith, Adam, or Herschel, appears likely to be orphaned once more. Not slowed down by excessive monologues but still rich with straight-to-camera dialogue, the grim ending still has me feeling optimistic for the remaining five episodes. Fans, the 11th Season might still surprise us yet!

Choosing to not take us to The Commonwealth worked perfectly. The episode leaves Daryl as an aside and gives Gabriel only a short moment or two on camera. The heartfelt welcoming of the horses cuts to the bloody ice pick Alexandria’s favorite preacher pulled from his leg, soon to be plunged into the skull of a wounded Reaper. Shoeless and wearing a symbol similar to the cross, fanatical Christians appear to be behind the well-armed acts of terrorism. The episode only gives a wink toward America’s current political landscape, but it appears the many shades of authoritarianism favored by the continent will make an appearance contrasted to the hopeful bastion of liberty that is Alexandria. Militaristic obsession with order or faith set against the imperfect experiment of shared self-determination: it’s a more aggressive thesis than we saw last season, but I’m not convinced we’ll see it follow through. After all, God isn’t here anymore.

The main plot of the episode tracks Maggie after the initial encounter, seemingly herded toward a mall. It’s very possible her attacker missed for the plot, but the episode’s later hints have me convinced most of what happens here was according to plan. Reunited with Alden in a mannequin-filled promenade, the pair are quickly taken down by Reapers-in-waiting. Saved by Negan, Maggie’s able to get a knife in the back of Alden’s attacker before flashbangs end the fight. Setting up the episode’s close, Negan relents and helps Maggie carry the wounded man to ‘safety’. Instead, that turns into carrying him toward the screaming. 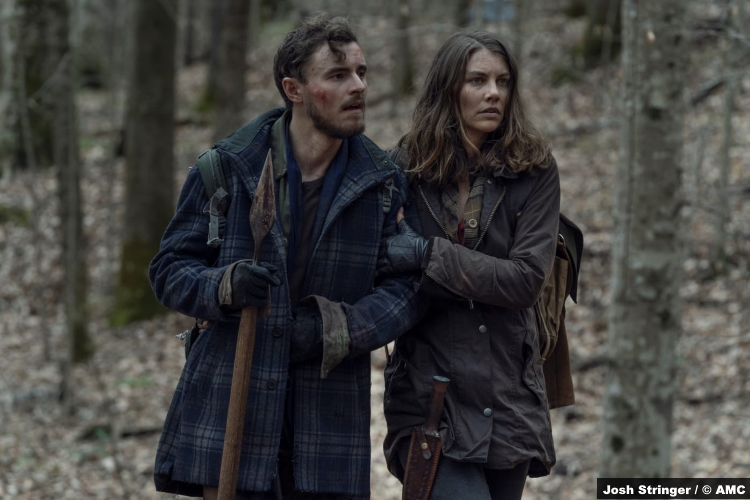 Able to save Agatha only for her to die in the next scene, Meridian’s remnants continue to be turned to ash by the Reapers. Taken to the woods to avoid the roads (lined by hung corpses in case you forgot) the party comes across a burned walker. Fastened to a pillar that reads “JUDAS”, the executed member of their community serves a double purpose: luring other walkers to feast. While you’d expect the wounded father to be zombie food, Agatha goes down instead. Negan wrestles Maggie away and they make their way toward yet another critical decision point.

Before we finished Sunday’s episode in church, the Alexandrian Amazons actually broke the formula; something good actually happened for the city! Kelly and Carol still search for Connie, both avoiding the guilt, anger, and pain hiding underneath the more obvious reality that comes along with accepting her death. Their quest for horses recruits Magna and Rosita. The four initially fail to capture one horse and then come across a group of slaughtered horses in a creek. The wounds look to have been from gunfire, with the corpses mutilated. If the episode continued “as usual”, we’d cut to something else. Instead, Magna hugs a still-pushing Carol and she sheds one of her first tears in quite some time. A few horses run past and the team manages to get them fenced in. A heartwarming moment where they drop their lassos and simply welcome the horses home surprised me. 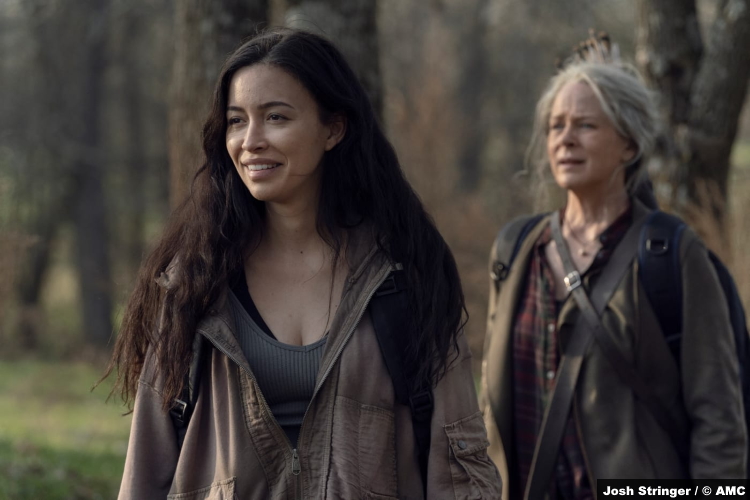 Carol cutting one of the horse’s throats to feed the starving people of Alexandria did not.

Rosita watches as Alexandria’s Lady Macbeth washes the blood from her hands. The burden Carol carries weighs her down more obviously here, having to kill a creature that trusted her in order to protect the city that depends on her. Holding Coco further back, I can’t tell if Rosita is disgusted or guilt-ridden as she watches Carol clean away the sins of upholding their estate. Magna is more forward in her position, telling Carol to stop encouraging Kelly to search. The last moments in Alexandria are Carol taking Kelly out to search. Magna wants her family to heal. It’s a hard motivation to fault her for, especially having seen the destruction Carol’s obsession with the past brought. On the flipside, Magna is more like Carol than not. I imagine Carol’s motivations in keeping Kelly’s hope alive are more complex than the self-serving narrative Magna suggests. I think Carol is trying to keep Kelly from becoming like her. There’s a child-like innocence to Kelly both hope to protect but their approaches are mutually exclusive. 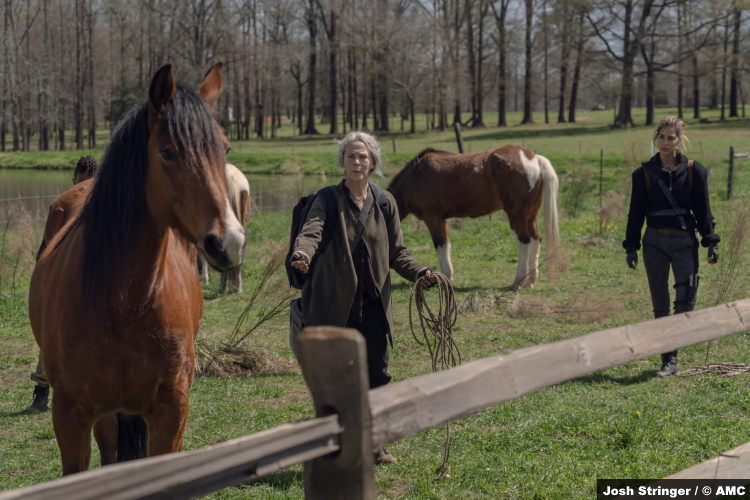 Rebuilding the stakes in Alexandria helps fuel the emotion of Hunted and the season ahead. A solid performance and a reminder that this is the only place good things seem to still happen makes Alden’s insistence that Maggie focus on the mission above all else more believable. The difficulty of her choice, the weight she bears as well, and the still-flickering light of hope inside Maggie make me want to believe Alden will still be alive when they get back. Instead, I suspect Negan and I share the same worry: killing the wounded man would have been much kinder than giving him some supplies and a knife. Leaving us to wonder not only about his fate, but that of Daryl, Gabriel, and whoever else might still be alive from the ambush, I wonder which Shakespearean drama will play out for us next week!

9/10 – A great rendition of Macbeth follows the failed two-parter Tempest as Angela Kang continues her homage to Shakespeare’s greatest hits in the final season of The Walking Dead. Smartly paced and sharply written, the whole cast and crew deliver an exciting, well-executed episode. While it would be hard for me to justify this rating by any one scene alone, the episode as a whole succeeds and plays to its successes. It doesn’t try to cram in more characters and subplots than necessary, the ones selected speak to each other emotionally, and the blanket of emotions hanging over me at the end felt satisfying. I am officially back on the hype train! 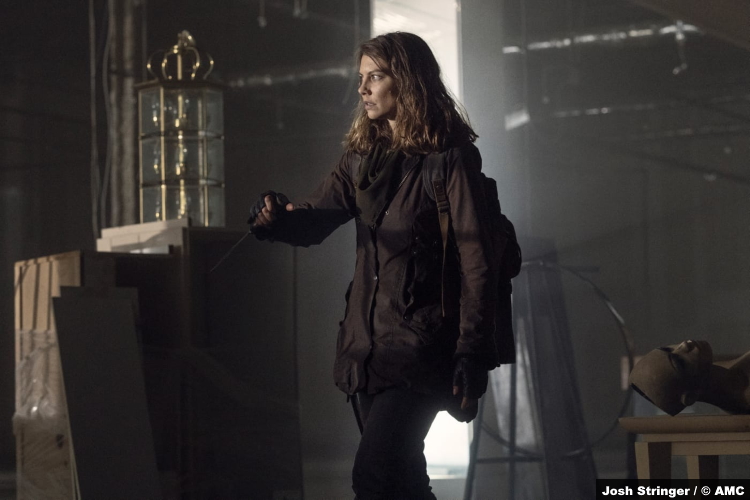