The Walking Dead S11E02 Review: The Archeron Part II – Who falls in first?

Relying heavily on the promise of some sick payoffs, the second half left me wanting more. I mean that both ways here: I’m genuinely curious how far Executive Producer Angela Kang and the cast will take their story but I also really hoped for more from the second half. No matter which character you chose in Part I, Part II delivers a few great jump scares, a few teases, and a couple edge-of-your-seat scenes without committing to a solid break in formula. I thought I would have to spend this whole review eating my words after watching the cold open and what looked to be a horde devouring our heroine! Fortunately for Maggie players and fans of Lauren Cohan’s chilling monologues, The Archeron Part II dives deeper into the series’s now-stale nihilism without committing to an ending that leaves us all feeling sour as the mainship series closes out.

Before delving deeper into a recap, it’s worth emphasizing how consistently The Walking Dead threatens a true end of humanity without committing to it. Comparisons between the source material and the televised versions mostly reflect the differences in mediums and their audiences’ sensibilities. Maggie’s recollection of how she took down one of the more depraved villains of post-apocalyptia would no doubt be illustrated in horrific detail. More than just an indulgence in violence, the graphic novels wanted to show that depravity. The show doesn’t hide from violence. Her speech is punctuated by the self-flaying of a treacherous ally getting his just desserts. The scene doesn’t lack for violence. What Kang has consistently chosen to do is tell the audience about the depravity out there while fixating the camera on the looming shadows inside. Looking at both parts together as the opening paragraph of her final chapter on the main franchise, one would expect an ugly wasteland to mark the end. Knowing how television and the many planned spin-offs work, it’s more honestly a question of which characters will finally give in? As the authoritarian security of The Commonwealth weighs against the possibility of liberal freedoms in Alexandria, who will finally fall into the shadowy abyss before Season 11 closes out? 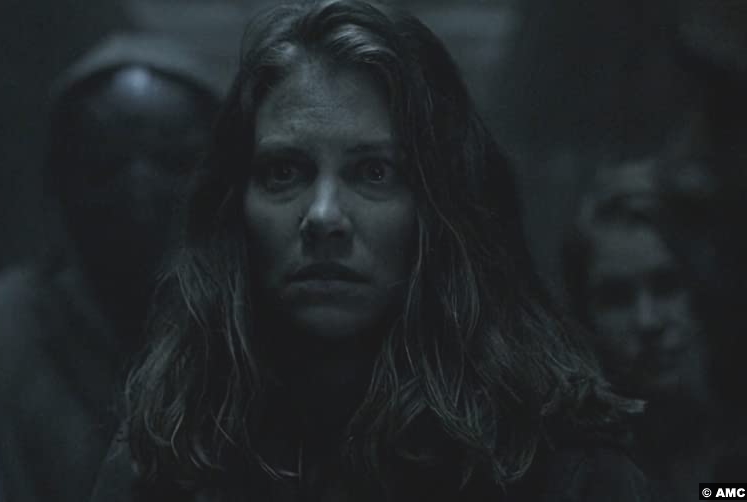 Daryl seems least likely to give in. His side-quest through the ruins of a fallen attempt to survive in the sewers ends more happily than the others. Where Maggie players watched their traitor die to guilt the survivors, Daryl players watched their traitor give the hero a chance to save the remaining party. Despite the incredible scene where he grenade-punches a zombie in the mouth to save the trapped team, much of Norman Reedus’s time in front of the camera feels pointless. Left on his own to chase after Dog through yet another childishly painted museum telling the horrible end of a society that fought over authority, the total waste of talent is lost on me. The Commonwealth plotline served to slow the episode down and give a refreshing pace break from the double threats of the subway cars. Getting Daryl out of the way was certainly necessary for the plot, but his resupply mission mostly weighs the episode down instead of fueling the excitement. 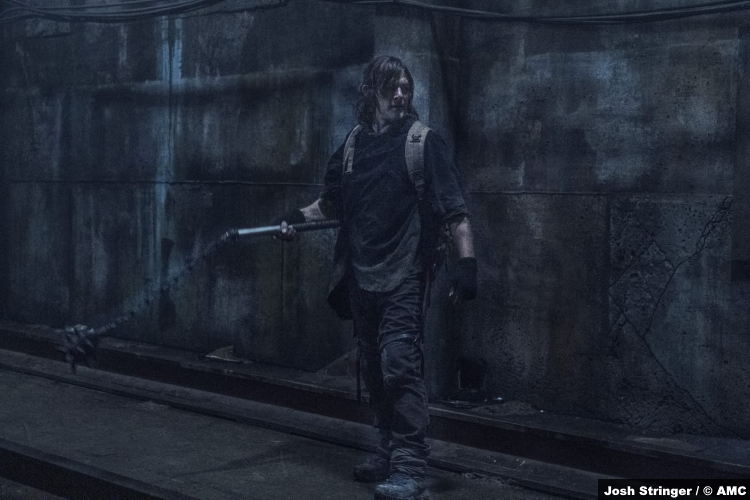 Rather than snapping the tension and sending us through a Resident Evil 0 homage, Kang builds on it. Maggie’s survival exposes the deeper understanding of just how far down the abyss actually goes. Rather than killing Negan, she accepts his cold distinction: he let her fall. The “fair’s fair” sensibility gives Maggie more layers than she professes to have in her incredible retelling of how far the world has fallen outside. Cohan offers no mercy as she tells why there are far worse deaths than zombies feasting on self-inflicted wounds. Maggie’s insistence that Alexandria and the fallen Meridian they’re hoping to scavenge are rare explains her deeper commitment to “what’s right” as Negan closes out her speech, interrupting “because if it isn’t-

–it means we’re lucky. It means nobody has it figured out. Nobody ever did. And nobody ever will.”

For his own part in the episode, Negan serves mostly to agitate. He also appears willing to embrace the uneasy acceptance of one another’s survival, returning the gun Maggie reluctantly gave him to fend off zombies during the earlier siege. It may be my own wish more than a reasonable analysis of the scenes, but Negan appears to be shaping into more of the devil on Maggie’s shoulder than a direct threat to her survival. While outright cooperation would be a shocking break in character, an unwelcome advisor to balance out the more optimistic but short-sighted Daryl could make this ongoing adventure into something that breaks from the formula. With the party largely reunited and sufficiently reminded of how hard surviving just another day really is, submitting to security nearly breaks characters in far better conditions. 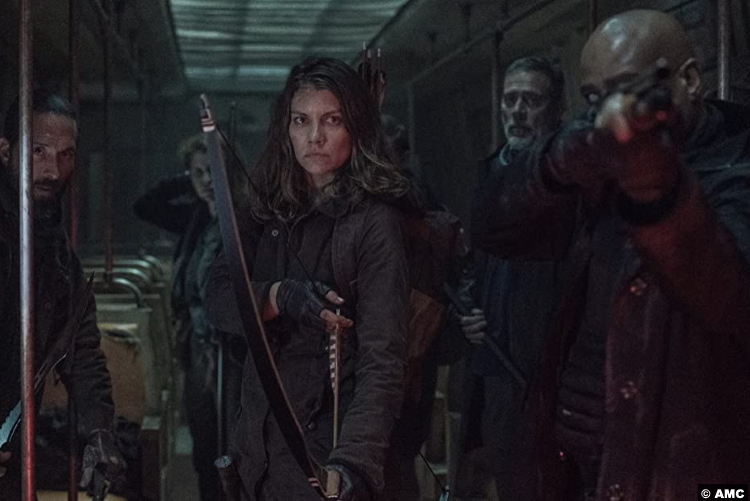 Eugene sweating himself to death as Yumiko deftly dresses down the Assessors did less to enhance the episode than I’d hoped. He makes an ultimately pointless push and doesn’t actually break from the agreed-upon story, but choosing to keep the Commonwealth hidden behind fencing for the entirety of the episode is a massive miss. Rather than trying to replay the Part I’s “oh this place is scary!” after giving Eleanor Matsuura her own impressive speech, why not advance the plot. There are four episodes left before the break and it seems like we’ll be spending much of our time there. How much of the runtime will be watching people sit and babble? Having his romantic interest appear to be real (and no doubt be a honeypot who turns them in after he tells about Alexandria in the next episode or two) as the close to the episode was more a slap in the face than satisfying end. The powerful speeches in the more dimly-lit half of the episode were balanced out by intense visuals and a ticking clock. Pent-up, overly self-important bureaucrats are too much a part of real-life for them to capture the imagination. 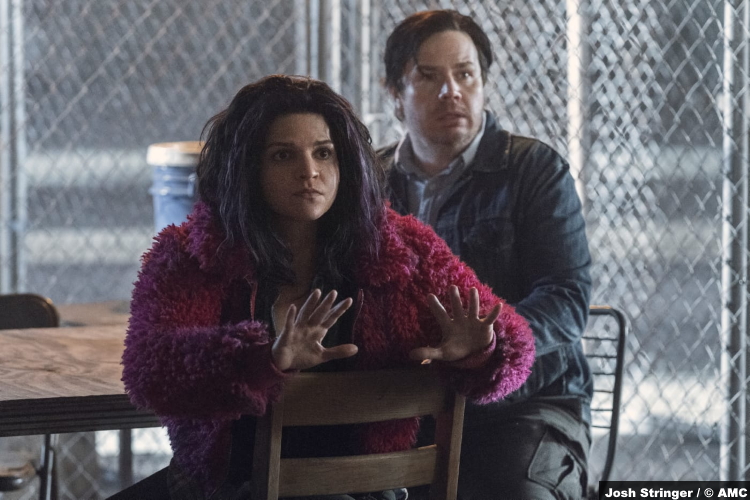 While the story itself leaves much to be desired, it’s worth emphasizing just how incredibly well done the subway/sewers scenes are. Everyone executes on their moments and the minor characters effectively fill in the narrative space between rapid exchanges and uncomfortable ambient noise. Watching the episode was a lot of fun and I hope to see more daring displays like the vengeful suicide as we progress to the end. The veteran actors shine brilliantly, which hopefully means they’ll be given more scenes to act and fewer staged fight scenes like the opening of Part I. Standing on its own, Part II actually makes a decent introduction to the season. As the second half of an hour and forty-some minutes of television, “The Archeron” as a whole disappoints.

Part I is almost entirely fluff, with the only major consequences occurring in the last few minutes and mostly as set-up for Part II. That set-up is quickly squandered with Maggie’s survival and Yumiko’s aggressive response to the Commonwealth, making the entire first episode of the season entirely unnecessary. Looking at the two episodes as a complete pairing makes both look worse: Part I is largely regurgitated scripts from the edit room floor that makes the by-the-numbers execution in Part II feel repetitive despite succeeding more like an episode on its own. You could very easily have not seen Part I and missed no meaningful context in Part II. That said, this is a review of Part II which is now the actual first episode of season 11 according to yours truly.

7/10 – Although some of the earlier plot points were quickly discarded, the visuals of The Archeron Part II alone make watching worthwhile. Gore and the unshakable veteran cast combine with the cool lighting and stop-and-go pacing of the episode to leave the audience satisfied. It doesn’t deviate as much from the established episode flow, but it does leave enough threads to pull jaded and fresh-faced fans alike into the coming story. Getting to see the Commonwealth, learning more about Meridian and its downfall, along with all the other characters’ stories still to be explored!