Ten minutes until the opening credits with a single exchange of dialogue done in ASL! A non-verbal cold open prolonged what felt more like a frustrating co-op mission in Zombies than what I would have expected from the first episode ending 11 years of a pop culture phenomenon. I promised to free myself from the graphic novels and any expectations built upon anything outside the series itself. I almost would have preferred watching an anime-style montage of character names slapped up against heroic poses flashing in front of me than 10 minutes of soldier zombies and a very noisy stealth mission. So much of what the show has proven as it nears its end feels thrust into the forefront at The Archeron Part 1’s beginning. It feels as if Kang and her team acknowledge the expectations and throw in the towel in many ways. It feels like a tutorial and as we cut to the familiar intro music, I wonder which protagonist am I to choose to best enjoy the season?

Here’s what the episode lays out for us: 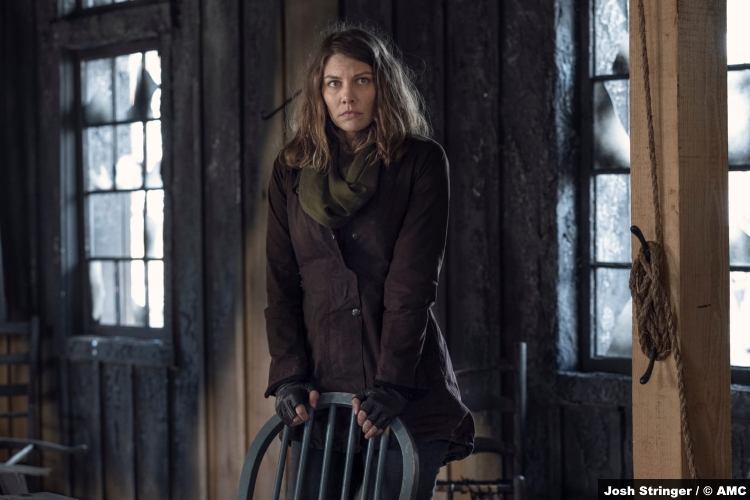 Viewers who picked Maggie chose the safe route, aligning with the more obvious hero. On her face, Maggie has quite a lot of plot armor headed into the final season. The arrival of old members of her group along with the adorable little boy waiting at home for her make the obviously personal quest to avenge her fallen settlement to save Alexandria make Maggie all the more endearing. 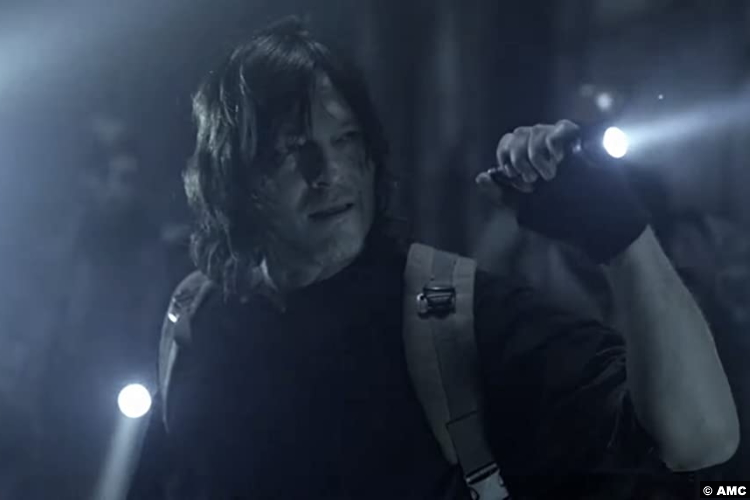 Daryl’s stand-alone episode seems mostly forgotten, but Dog is not, and fans of Fallout no doubt sided with the dirty fella and his pup. Daryl’s eagerness to apply himself to a death march and the quick disdain he casts on everyone unwilling to join reminds me more of an earlier version of the character. While I had expected his recollections in the forest to awaken some kind of deeper peace, Daryl’s search for his potentially living love has been set aside. Frustrated with the status quo and perhaps eager to throw his weight behind a new challenger, Daryl seems blind to the deeper anger around him as he wrestles with his own demons behind the scenes. 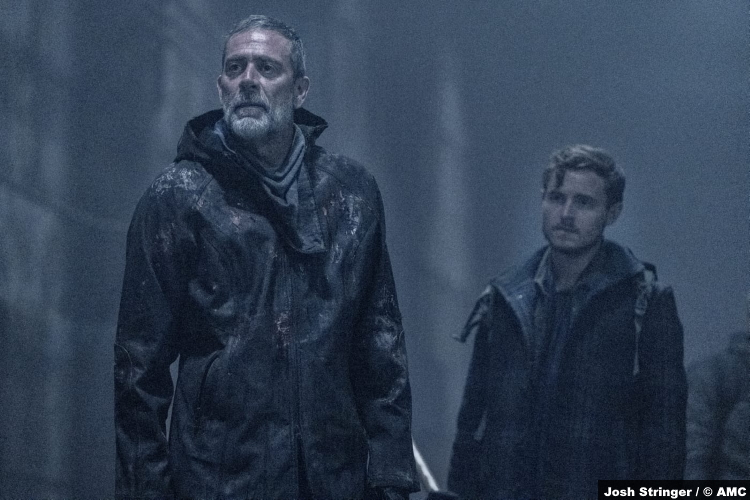 Negan replaces the expected third character. I suspect she might show up in the second half, but if not, Negan proves a worthy story on his own. Brought in as a navigator, he knows survival will be hard. His survival will be even harder. Invested in making his place in Alexandria, his loyalty seems fundamentally affixed to himself and survival. His farewell to Lucille seems to have freed up his tongue as he nags through the storm and subway tunnels framing the A plot of the episode.

Elsewhere in the apocalypse, the away-away crew finds themselves under intense interrogation from the Level 1 Auditors for the Commonwealth.

Yumiko steals the transition away from the inevitable flooding of the subway to the Level 1 Assessment for the Commonwealth. Eugene and company manage to deflect most concerns about Alexandria, but Ezekiel is less convincing in selling his goiter had been there since birth after a coughing fit interrupts his powerplay against the stormtrooper in orange. While Eugene holds on to hope that the honeypot wasn’t simply a trap, the rest of the crew wants out. After a random captive is taken out for reprocessing, whatever hope Eugene has left seems effectively squashed and the group is ready to get out. 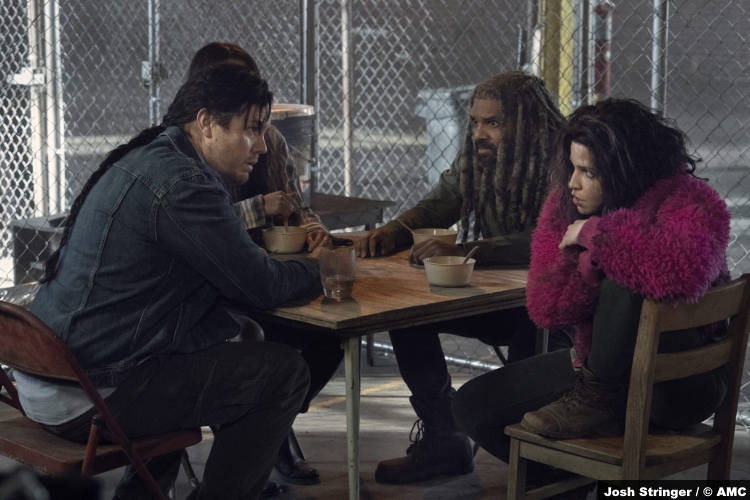 Princess’s attention to detail (and perhaps her imaginative intuition) catch on to a break in the guard shift where both uniforms are left unattended and the authorities are quite indisposed. As they break out, a wall of pictures and a few attached memos gives the Commonwealth a hint at who to process expeditiously: Yumiko is apparently on there, her brother living in whatever the Commonwealth actually is, where that might be. She decides to stay as the rest of the group goes: no doubt, we’ll see exactly what reprocessing looks like as she seeks out her brother The previews for next week’s episode shows the whole group stayed: apparently 50/50 splits go to the idiots in The Walking Dead. We’ll see how Yumiko and Eugene like fascism and how Princess and Ezekiel manage to keep everyone from being crushed by reprocessing next week.

Yumiko finding her brother seems like a fairly weak reason for two people obviously not making it through the selection process to jump back in. Perhaps I’m coldhearted or I expect having survived in the post-apocalypse long enough to forget your zip code might have hardened Yumiko’s heart enough that a faded picture and nickname on a scrap of paper wouldn’t overturn seasons of skeptical, decisive character building. You would apparently be wrong. I expect the second half of this episode will deal with teaching Yumiko to kill whatever optimism remains, but for now, I’m having a hard time understanding the decision to end the two-parter B-plot on this particular point. Obviously, the writers needed to get the characters into the Commonwealth. They spent a great deal of time setting it up and now we’re finally there. Escaping into the night would be pretty lame. Unfortunately, “Yumiko derails the group for sentimental reasons” feels like old plot material recycled here in the last season. How many times do we need to see this storyline play out?

If we’re going to go for hard to believe, make the suspension of disbelief worthwhile! Fortunately, the A plot delivers more than I expected.

Maggie players definitely feel good in the beginning, commanding the crew assembled to find what remains of Meridian and take it from their nighttime attackers. The detour into the sewers gives Maggie plenty of opportunities to lord her in-group influence over her nemesis. Daryl’s fans are largely Player 2 for Maggie. His emotional instability shows as he mocks any concerns from Negan. Despite having taken him seriously before, Maggie’s hostility toward Negan pushes him to take sides and ignore the obvious signs of danger that my fellow Negan players are aggressively shouting. Unfortunately, that approach ends in an unnecessary fight amid zombies. 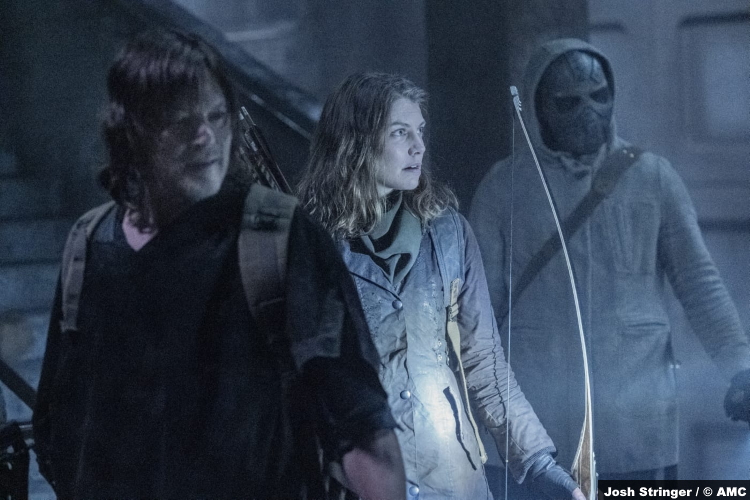 Negan crosses the line after revealing Maggie’s plot to kill him, insisting he won’t die as Glenn did. Daryl punches him to the ground and the barrel of Maggie’s pistol stares him down. No doubt a few of you at home pulled the trigger, but the little part of Maggie “that left six years ago” keeps Negan alive long enough for her death march to reach its inevitable, brutal end.

The boss wave begins when the two who sided with Negan are discovered missing. The group’s supplies went off with the duo, most importantly including the ammo they desperately need as a horde approaches. Daryl players chase after Dog who dashes under the rubble holding an abandoned subway car in place. Negan players climb up and watch in absolute horror (or perhaps delight) as he lets Maggie fall to her apparent death and the episode leaves us with a taste that our expectations should be thrown out the window! 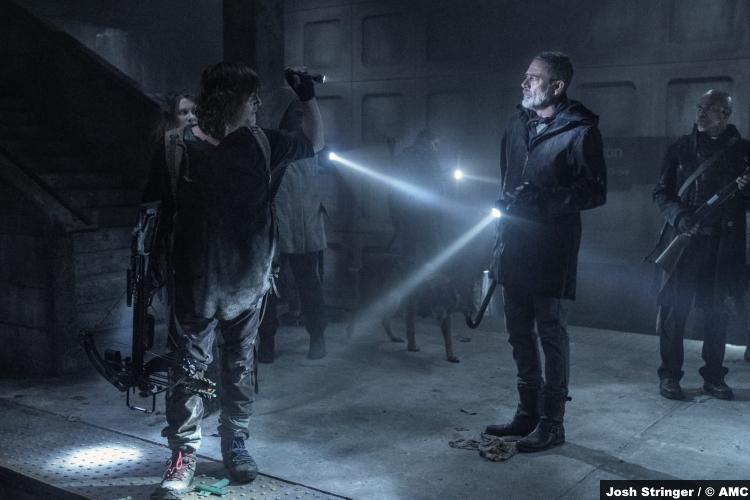 I know Maggie isn’t dead. No one watching seriously expects her to end up a walker by Season 11 Episode 2 but forcing Negan’s hand so early and justifying Maggie’s antagonism before the action begins excites me more than it should. I’m willing to believe that Kang threw this generic zombie-genre opening at us to give jaded fans a happy sigh. Then she left us with a shocked gasp. Whatever happened between the opening and the ending, as far as the Executive Producer is concerned, that’s a good episode of television. Critics like myself might hem and haw over the use of time and the rather boring visuals throughout the episode, but I’m willing to believe that Kang doesn’t care much about fans of television in general right now. Perhaps not even fans of The Walking Dead franchise. The first episode in the last season of The Walking Dead the television series said at least one thing I hoped it would: this is our story’s ending.

I could be projecting my wishes onto the rest of the season, but I hope we’re treated to twists, turns, baits, switches, and every single trick we think we know from the surviving team, both in-canon and in the writer’s room. Here’s to the beginning of the end!

6/10 – The actors do their characters justice, especially freed from the more restrictive limitations of the pandemic. What lacks in visual arrestment or any kind of payoff for the tension built, the last few frames made up for in full. The second half should be a roller coaster with how many strings remain taught and unresolved going into it. There were opportunities to shape scenes and interactions that could have made the episode length feel more justified, but there are hints of formula breaking and unexpected character development that could make the last season the best!