The Walking Dead S10E19 Review: One More – So much more than a plot twist

Trudging through the mud in-promise of finally finding something to make the excessive journey so far feel worthwhile is especially relatable these days. One More focuses on Aaron and Gabriel following after Maggie’s map. Location after location expends what little confidence Aaron has, but Gabriel draws on something like faith to push the pair onward. One More may be one of the best-written episodes I can remember in a long time. Technically successful, visually exciting, and narratively rich, what I expected to be the dull interlude between “everyone’s favorite characters!” and “Season 11 hype!” made the last two episodes feel like fan service. While it’s hard to believe the Maggie/Negan conflict won’t resolve with some kind of armistice and Carol/Daryl won’t find a way to mend their relationship, believing that Aaron or Gabriel won’t make it back? That made the story feel heavy like the action on-screen had consequences. Of the three episodes in this extended season, it definitely handles the concept best. 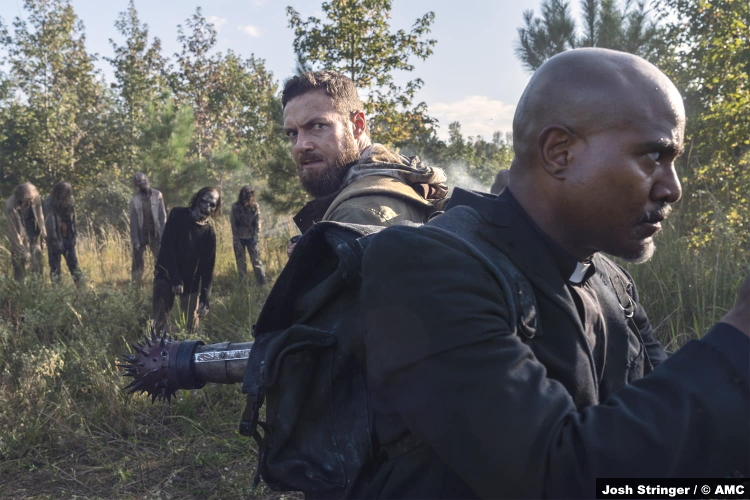 “Consequences” in fictional stories always feel a little hollow when held up to real-life examples of history. Narratives with their own history like The Walking Dead are able to do what the fallen empires and rebellious heroes of our ancestors in lands far away do for society at large. Aaron and Gabriel serve as literal and metaphorical father figures, among the longest living members of what settlements remain and taking on patriarch roles. Betrayal and loss mark both their pasts, but they hold onto different views of their histories. Aaron believes in the survivors and rebuilders, the possibility that humanity can begin again from nothing and do better. Gabriel feels more blinded to his former optimism, drawing on the memories of his early days of a seminary to comfort a friend while mercilessly bashing in the skull of a wicked man willing to reconsider. The ‘consequences’ One More forces the audience to confront feel entirely too real to belong wholly to a fictional universe. Gabriel’s betrayal of Aaron’s sincerity, smashing in the head of a probable threat pacified, is made all the more grotesque with the weapon: Aaron’s own hand. 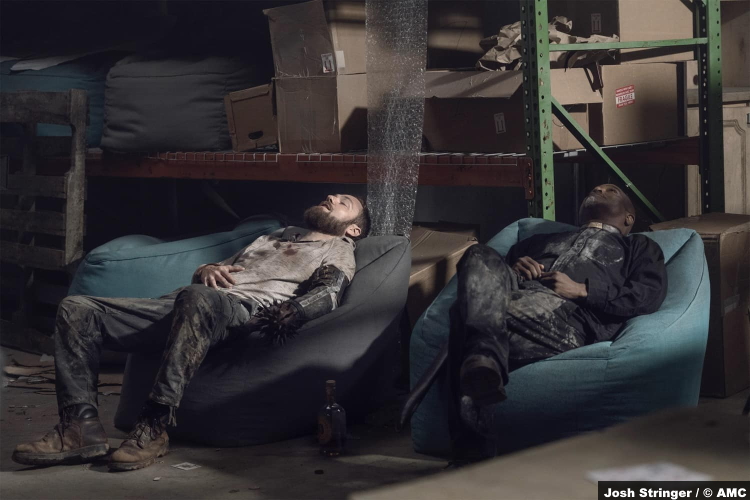 Before I gush about the psychological drama of the episode, let’s cover the big plot points here: the well-armed psychopaths with an emotional axe to grind are aplenty. The warehouse in which most of the episode takes place seems to have been built after Maggie and the crew traveled through the area. While it’s entirely possible she missed it or the pair wandered off-track after losing the map, its inhabitant freely fires off bullets and has little trouble surviving. I may be drawing a red string where it doesn’t belong, but Mays could be related to the suicide bomber from the first episode. Charred bodies, destroyed buildings, and the salted-earth approach of Maggie’s pursuers mark the early parts of the episode. I’m willing to reach and say the character was involved with them, but I’m less sure about what awaits at the water tower. I suspect we may see the ethnically divided founding fathers play a major role in the season ahead. Their performances here certainly cemented Ross Marquand (Aaron) and Seth Gilliam (Gabriel) as still delivering high-caliber performances. 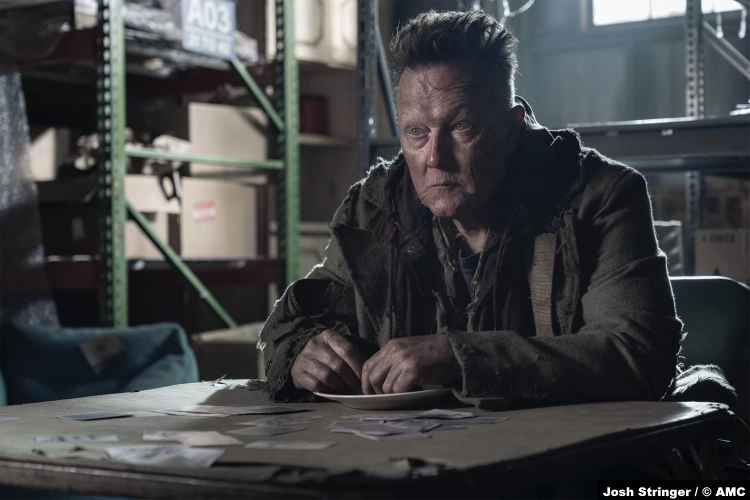 Just the last 5 minutes of the episode alone deserves consideration: Aaron’s brutal sincerity in his unwillingness to break his morality, Mays’s scratchy scream for Aaron’s finger to “Stop!” on the trigger, and Gabriel’s unhesitating swing splattering Aaron with proof of the doctrine Gabriel has clearly cemented in his heart. “Good men are the exception” justifies what he’s done to keep his world moving. Aaron realizes how broken Gabriel’s faith in humanity has become, breaking Aaron’s faith in the fallen minister. The man he would have killed himself to save struck down their captor who had surrendered. Conversely, the psychopathic kidnapper and torturer had been lulled by Aaron and Gabriel took his chance to secure their escape. The ending of the episode allows the audience an agnostic interpretation: neither Gabriel nor Aaron are entirely wrong. It asks you to consider your perspective while watching. 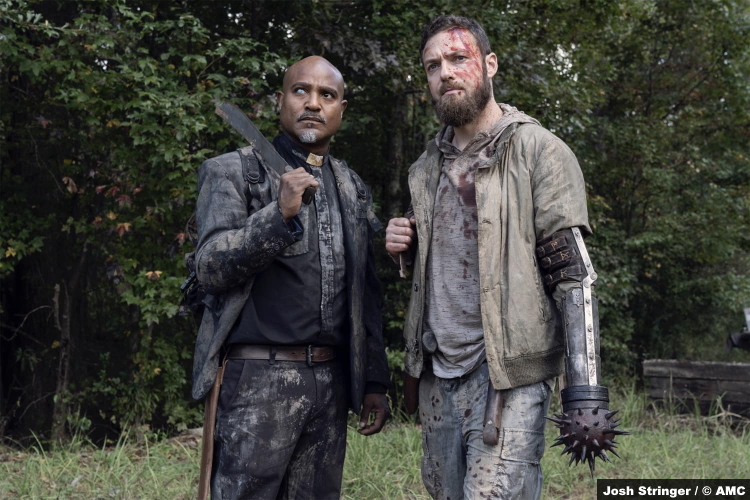 Are you like Aaron and I, who looks for the redemptive traits of each character or their possible chance for salvation? The type of guy who reloads a save to save an NPC or feels bad when they Fus Roh’d Lydia to her permadeath for the first time? Try watching the episode a second time from Gabriel’s perspective.

See the world around you as an active threat within which dwells something truly sacred and worth protecting. Each person you encounter could destroy those precious things, turn your holy bible into toilet paper. Gabriel pontificates on a moment of past faith with a current hopeful, drunkenly inspiring a part of Aaron with a part of himself Gabriel no longer believes in. That speech was overheard by a predator and his ability to see the shifting of a moment allows Gabriel to disarm a psychopathic murderer hell-bent on their destruction. Gabriel sees a moment to destroy the threat and does so without hesitating.

I still side with Aaron by the end of things, but my second watch made it harder to see Gabriel as a monster. Aaron’s insistence that they continue onward for One More by the episode’s end doesn’t worry me that he’s become any less willing to believe in people as a whole. If anything, the cold, certain delivery betrays faith renewed and trust lost. Gabriel and his internal motivations appear more complex than even he’s aware. The Whisperers’ campaign to destroy the foundation of Alexandria and Hilltop appears successful. At the very least, the wells they poisoned sufficiently filled the inhabitants with toxicity. Aaron appears more hardened in his resolve to reach out and find ways to collaborate, while Gabriel is more certain than ever that everything that is not immediately a friend will always be a threat.

10/10 – I hate to throw out high ratings like this but I truly feel One More deserves it, especially as stand-alone content. Maybe I’m starved for stories or maybe The Walking Dead not stringing together endless cliffhangers has allowed the writers to flex more! One More builds on a string of incredibly enjoyable character meditations while blinding us with one of the best plot twists in quite some time. I was far more surprised to see Gabriel smash in Mays’ head than I was to see Carol free Negan and I suspect Aaron and other characters who see this side of Gabriel in the future will feel much the same. I’m looking forward to seeing how they wrap up the extended season and lead into the promising 11th!