First of all, intro: I adore the original Don’t Breathe. I mean the first words in my review were “Absolutely Amazing,” and I still think so. The movie combined a clever, high-concept premise, with sharp writing, and some unbelievable twists and turns that kept the story fresh, thrilling, and always surprising.

The sequel might as well have been made in Bizarro World because it took everything that worked about the original and did the opposite. I hated this movie. Loathed it. Part of that is because I loved the first so much, so the disappointment of the sequel being so terrible is bound to affect me, but even if I had never seen that film, there are enough structural and conceptual problems with this to doom it all on its own.

So, without further adieu, here are ten things I hate about you, Don’t Breathe 2… 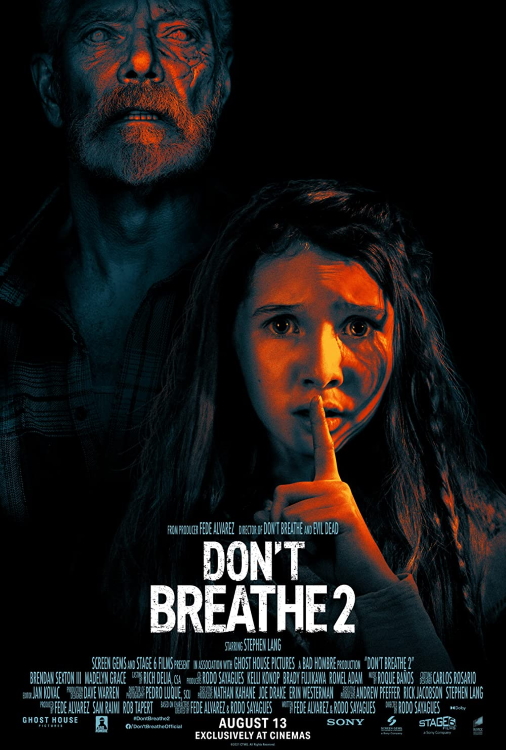 I HATE THE PLOT

The first movie was a delight to watch unfold. It begins with a clever idea: A blind guy suffers an attempted robbery, but he’s actually an old Navy Seal who is more than capable of taking care of some petty criminals. It’s not very common for the bad guys to be the ones hiding and being hunted and that’s what Don’t Breathe gave us. And then, halfway through, the movie throws us for a total curveball: The blind guy we thought was the protagonist is actually very much the villain of the picture, and even though nothing about the structure of the movie changes, the entire perspective flips and we start rooting for the former baddies to get out before they get got.

This movie has nothing even close to a twist that compelling. In fact, it reveals the motivation of the bad guys in the first act, leading to a reveal later in the movie that is anything but. Yes, there are elements to the big reveal that wasn’t known ahead of time, but everything was handled in a clunky, perfunctory way, leading not to gasps but a series of “oh, okay I guess we’re doing this now…” moments. The initial motivation of the villains (organ harvesters) never deviates; only the particulars of who and why, and that doesn’t really matter because the characters are all so terrible…

I HATE THE CHARACTERS

Holy cow what a disaster this movie is with its roster of characters. In the original, there were a pair of criminals that were okay enough to root for when the story flipped on its head. Here? The blind guy is still the same rapist, kidnapper, murderer that he was in the first movie, so despite the script’s desperate attempt to make me sympathize with him, I have none to give. I want him to lose…but I also hate the meth addict, murderer, organ stealing, kidnappers on the other side of the coin as well. The only character to root for is the little girl in the middle of it all, and she’s given nothing to work with to make her compelling, nor does she do anything heroic or with her own agency. She’s a passive character; the active ones are all terrible.

I HATE THE “SCARES,” OR LACK THEREOF

The original film was aided by the fact that you had no idea what was coming next, and the booby trap-laden house, combined with an amazingly crafted plot, meant every few moments brought a big shock, scare, or thrill. Here? The film suffers from the plague of substituting horror for gore. The movie is ugly, not scary. It is bloody, not thrilling. And worst of all it is stupid…

I HATE THE LACK OF CLEVERNESS

There’s an entire second article I could write, if I cared to (and I don’t), about how idiotic every major plot point, character decision, or “reveal” is in this movie. Setting aside the stupidity of the characters themselves, there’s the lack of creativity in the plot. It’s a mess. It has no good ideas, no interesting moments, no well-crafted set-pieces. It has set pieces, sure, but how the movie gets there is lazy, boring, and dumb.

I HATE THE CONTRIVED MOMENTS

One of my favorite things about the first movie was how everyone’s actions were logical and consistent. Sometimes people made the wrong choice, but it was always portrayed as a heat of the moment, snap decision made by not-bright people. On the other hand, the blind man hunting them was ruthless and efficient like the freaking Terminator. He didn’t quip or pose or give his targets the chance to get away. If he got his hands on you, you were done.

Here? There’s a shot where the blind guy kills the power to a building and, when a baddie goes to flip the switch, the lights turn on revealing him standing there…posing, giving the baddie the chance to turn around and see him and start a little fight. In the first film that wouldn’t have happened. That blind guy wouldn’t have waited for the lights to turn on; he would have just cut the guy down. It was a contrived reason to have a fight scene.

Later, the baddies escape in their van, leaving the blind guy needing to track them down on foot. Obviously, that’s beyond improbable. And yet, there’s a dog left by the bad guys who, with a simple “go home” command, can lead the blind guy to the bad guy’s secret lair (I kid you not there’s a secret lair), on foot, in time to stop a surgery that should already have happened before he ever reached them. 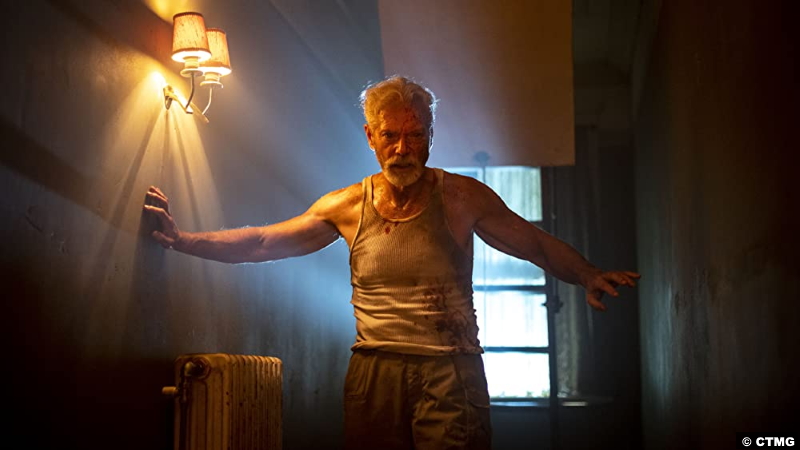 That’s it. That’s what it does. The first movie was paced perfectly. We were in the house and starting the action within fifteen minutes, and the big twist comes at the exact halfway point. The thrills, close calls, and horrific moments kept coming and didn’t stop until the movie did. Here? The action takes up basically the first half of the movie, then the film moves to exposition-city before we repeat the same beats from the first half all over again. This isn’t one movie; it’s one-half of a movie shown twice.

I HATE HOW DUMB EVERYONE IS

When you’re being hunted and you find a hiding spot that works, don’t leave. When the bad guy goes to that exact hiding spot, looking for you, and can’t find you, congrats: You have the perfect hiding spot. Do not then leave said hiding spot to make a run for a suspiciously open door (where previously you observed how the exits were being watched).

When you are kidnapped by creepy weirdos who tell you that you are free to leave at any time, and you start walking straight for the open door to freedom, and the hear the freaky, creepy sounds of a lady in a wheelchair, do not turn around to investigate. Just leave. The way is clear. Go. If they were lying and they bring you back, well at least then you’ll get to learn about wheelchair lady, but if they don’t: No harm, no foul.

And those are dumb moments by the only character in the movie who isn’t terrible. Don’t even get me started on the bad guys who, at one point, encounter the blind guy pretending to be lying dead on the floor. You have guns in your hands and you are out of his arm’s length. Just shoot him. If he’s already dead, then sorry you wasted three rounds. If he wasn’t already dead, well he’s dead now and you win. Don’t just slowly approach him and then let him stabby-stab you all to death.

As for you, blind guy: Why superglue a man’s nostrils and mouth shut when you can just stabby-stab him like you did the others? What even are we doing here, blind guy?

How hard is it to make a scary movie that just goes and goes and doesn’t let up till the end? Not hard, because I see them all the time. Even ones that allow for some moments to catch its breath are still paced in such a way as to keep the action driving forward. Here, as said, in a movie that’s not even an hour and a half, it drops no exposition for its first fifty minutes, then dumps all of its exposition in one momentum-killing scene. The movie, which was already bad, never recovered, and lost any hope of sticking the landing and stumbling into a satisfying conclusion.

I HATE THE STUPID VILLAIN POSSE WITH THEIR IMPROBABLE LAIR AND CLEAN-CUT ON-CALL DOCTOR, ALL LED BY “METH WAHLBERG”

There are like ten of them in this giant abandoned hotel that, at one point, I swear is labeled as a train station. It’s like the headquarters of the Foot Clan or something. They have lights and heat/air, TVs, comfy furniture. How? Who’s paying for all this stuff? Who is maintaining the payroll? We’re told that the two primary baddies sold meth, but that was eight years ago, and even if they are still making and selling meth, unless they’re Walter White, they’re not slinging enough product to pay for everything they have, least of all a white-collar, 1%er looking surgeon who is cool with cutting open live children because “they pay him enough” to do that. Are they millionaires? Cause that’s the only way they’re paying this guy enough to do that. And if they are, then they’re the dumbest, most low-class looking millionaires ever.

Then again, they are meth heads.

I HATE THAT THEY KILLED THE DOG, I MEAN COME ON, MAN

Freaking don’t kill dogs without a warning before the movie starts.

The original movie was selected as my favorite movie of the year in 2016.

This will not make the cut.