And we’re back, after a brief hiatus. In case you forgot where we left off, last time the Church told the assessors that they’d be handling the case of a *checks notes* “possibly sainted monk.” The monk, Thomas, is interred at a monastery that has taken a very strict vow of silence–hey, the episode title–so there is little spoken dialogue in this episode. Reminds me a bit of “Hush,” a great episode of Buffy the Vampire Slayer with a much more terrifying premise.

As with the Buffy episode, this episode finds clever ways for its characters to communicate, despite the lack of speech. The residents of this monastery, including a kindly young nun, mostly use Magic Slate boards to share short messages. The assessors use these, too, as well as pointed looks and hand gestures. (Kristen’s “WTF” gesture is a particular highlight.) They can talk outside the grounds as well, so there are a few scenes of them hurriedly whispering under the trees. 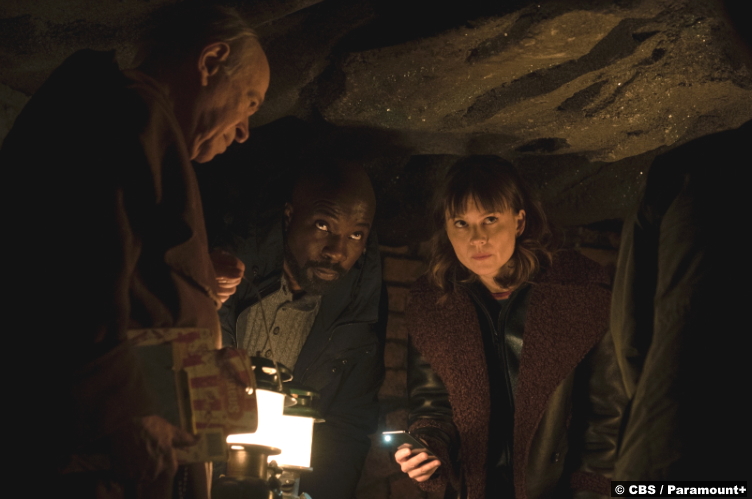 Anyway, the monks have taken this vow of silence because they believe it’s the only way to keep safe a demon they have trapped. But of course, that’s not the only (possibly) supernatural goings-on here–there is also the thing the assessors are here to, well, assess.

When the monks heard humming coming from the crypt, they opened up the coffin of the most recently deceased brother. He was remarkedly well-preserved despite the inconvenience of his death. So the assessors are there to examine the body, as well as bear witness to another incident. 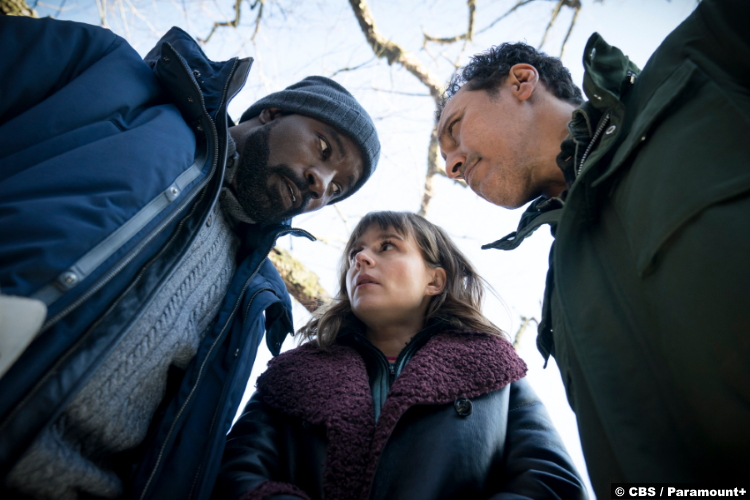 That incident is the appearance of stigmata on Fenna (Alexandra Socha), one of the nuns at the abbey. She’s a delight, by the way, and takes to Kristen right away. The monks make wine, which leads to a hilarious sequence of her and mostly Kristen getting drunk in the barrels.

That wine-making, though, requires the use of a wheelbarrow. As Kristen points out to Ben and David, just a little time using the wheelbarrow produces the telltale red marks on one’s palms. However, Fenna later reveals that not only does she have the marks on her feet, but she also has a gash in her side. So to be clear, for everyone who wasn’t raised in Christianity, those are all the main five marks of stigmata. (There are others, by the way, which include scourging marks on the back and the wounds of the crown of thorns.) 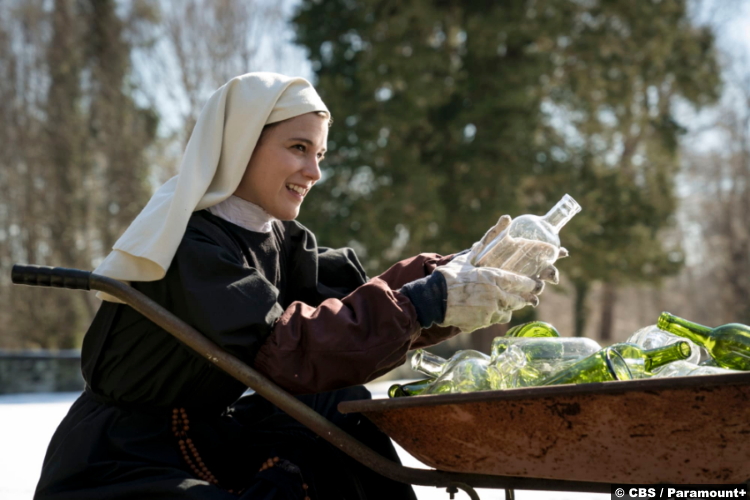 Our twin skeptics, Ben and Kristen, are hard at work. Ben thinks that something in the crypt, for instance, could have preserved Thomas’s body. This seems to be true, as Thomas’s body is showing signs of decay now that it’s out of the crypt. Kristen, on the other hand, is just skeptical. (She’s also still a little drunk.)

Fenna shows Kristen to her sleeping quarters, which is a little bed tucked away in a room where they store statuary. Again, this is a hilarious scene. I don’t easily scare, but I can’t say that I’d want to sleep in a room where a bunch of angels and saints and a crucified Christ and one particularly imposing skeleton loom over me. I’ve seen that one Doctor Who episode.

The skeleton even comes to life in Kristen’s imagination, picking its teeth with the scythe it carries. I thought for sure that she’d scream and that would be what made everything fall apart. Still, I’d already registered alarm when she’d spoken aloud to the skeleton, literally saying “Boo.” 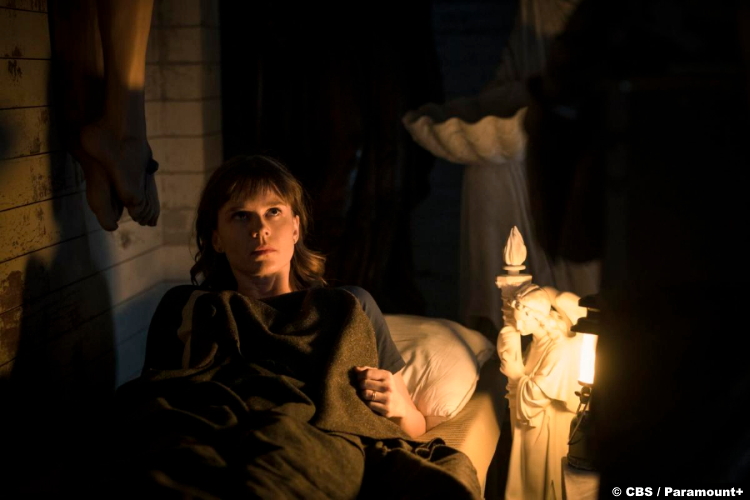 I mean, this is a place where everyone gags themselves at night so they don’t accidentally speak and loose the demon. So when a rhythmic clacking comes–the monks’ version of an alarm–it really comes as no surprise. The scene the assessors walk in to, though, is surprising.

A few monks are writhing in agony, each with a strange spiral mark on their bodies. But it’s not just the monks–poor Fenna is also suffering. There’s an angry spiral on her abdomen.

Back in episode five, I expressed surprise that the assessors never brought up stigmata. That episode, if you’ll recall, was about the troubles of Father Mulvehill. Well, guess who’s the exorcist in residence here? Yep, it’s Father Mulvehill.

His attempted exorcism of Fenna leads to the single grossest visuals I’ve ever seen on this show. As he rubs holy liniment (?) on the spiral, it erupts with larva and flies. Gag.

At the same time, Emanuel (Rob McClure) has allowed Ben the use of their computer, a blueberry iMac. After a glance through some other gross skin lesions, Ben comes back with his theory. It’s a botfly infestation. That explains the humming as well as the “sigils” on the monks’ skin–that’s how botflies reproduce. (That is all the detail that I care to give, by the way.)

A common treatment is by using an occlusive substance like Vaseline, so they treat the rest of the affected residents. It looks painful, but it works. And with that, the assessors are on their way. They’ve been a big help in here, but as David tells one of the monks, God needs them “out there.”

10/10 – It’s incredible how much they were able to pack into an episode that had about five minutes of actual speech, if that. From David wrestling in his head with his faith–another great sight gag, as we could “see” his thoughts–to the very sweet moments between Fenna and Kristen, the show was able to tell a lot of story. It was also a very funny episode, both in its visuals and its little details. Fenna’s speaking only Dutch–surely a reference to Katja Herbers’s own nationality–was one of the latter, for instance. Essentially, this episode was Evil as its best–a little scary, a little icky, quite funny, and wholly its own thing.